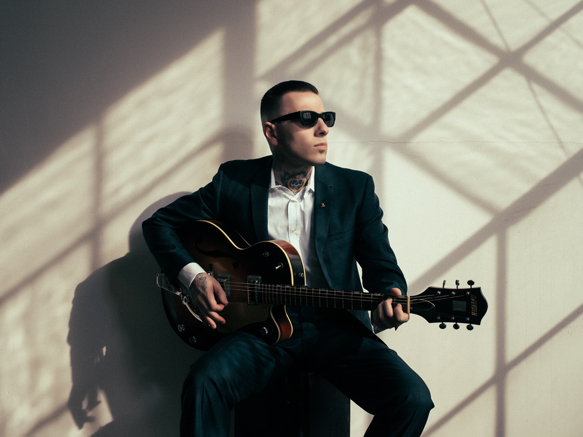 Tiger Army are one of those bands that often fly under the radar, but deserve much more attention. Initially forming back in 1996 out in California, the band’s style associates Punk, Rock, Rockabilly, among other genres for a unique style dubbed Psychobilly. Led by Guitarist/Vocalist Nick 13, the band released their self-titled debut album in 1999 and attained their much deserved success with 2004’s Tiger Army III: Ghost Tigers Rise and 2007’s Music from Regions Beyond, both of which broke the Billboard 200. Now almost a decade later, Tiger Army return with their fifth studio album, V •••–. Set for release May 20th via Rise Records, it is an album that long-time fans wondered would ever see happen. Called a great leap forward from their previous work by Nick 13, the 13-track album features Djordje Stijepovic on upright bass and James Meza on drums to break the radio silence.

The album begins with a strong, loud instrumental intro, “Prelude: Ad Victoria,” with a fast and threatening rhythm. This brief offering gives the impression the entire album will be in line with one of the faster and harsher albums of Tiger Army history. Leading directly into “Firefall,” the fast music continues with tight vocals and catchy lyrics. Then the music slows down a bit for “Prisoner of the Night,” which one could imagine Roy Orbison singing as a Del Shannon style bright melody plays in the background. Much more upbeat, “I Am The Moth” comes next with a rhythm that almost chases the listener, something often heard on Buddy Holly tracks. Bringing on a more Punk Rock vibe, “World Without the Moon” includes beautiful lyrics and a great rhythm that carries the listener away into the horizon.

Changing the tempo once more, “Dark and Lonely Night” is another track to sway along to. A love song with a tragic twist, it is timeless and a beautiful offering. With a vivid stand up bass in the background, Nick 13 singing, and some strumming on the guitar, the chorus, a female voice singing like an angel, some drama is added to melody. Then revving things up a little more, “Knife’s Edge” is much faster while it possesses a Country sound mixed with some Mexican style, sounding almost like a Mariachi band during the chorus and bridges. Keeping the speed up, “Devil Lurks on the Road” is an addictive track with a strong rhythm to chase the devil away. Mixing it up some more, “Happier Times” brings back the angel-like background vocals as the textured instruments dance in the background. Tragic, yet beautiful, the song burns into the listener’s mind much like a classic tune heard on AM Rock radio back in the early ’60s.

Slightly happier, “Candy Ghosts” continues the album with a typical Tiger Army sound that is very catchy and smooth. Thereafter, “Train to Eternity,” with a Country twang, takes the listener on a journey through the mind of Nick 13. Setting the pace with rhythms, it keeps the train rolling as Nick 13 passionately croons. With a catchy melody, “When the Tide Comes In” is a another fast-paced track dominated by guitar as Nick 13’s voice carries strongly. This leads to the soft and melancholic conclusion of the album with “In the Morning Light.” A finale that slowly evolves and wraps around the listener’s mind for one last time, it will leave one speechless by the time it concludes.

Tiger Army is back, and V •••-  carries a strong spirit and a lot of feeling. While a progressive step forward for the band, it still has the Tiger Army charm that fans have come to expect from Nick 13 and his creations. Passionate and deep, this album digs at the listener and will follow them for times to come. Wandering between Country and Rockabilly, Tiger Army is right where they belong. CrypticRock gives V •••-  5 out of 5 stars. 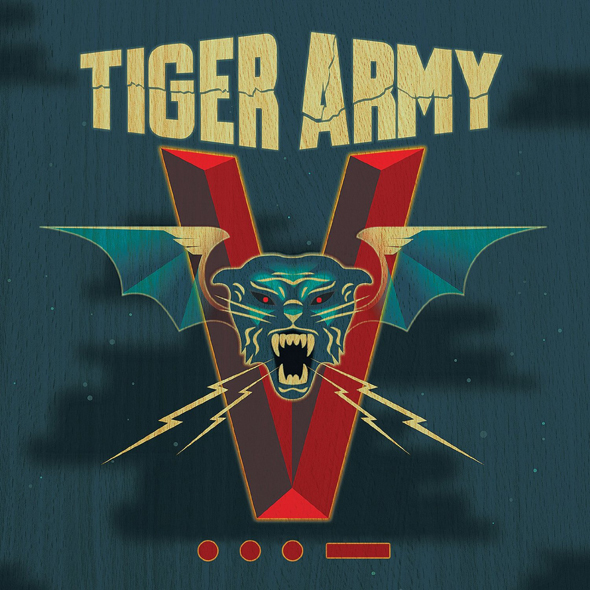