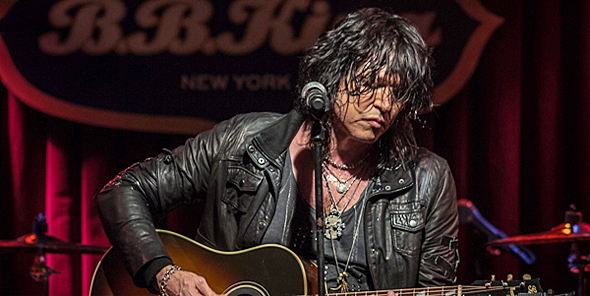 Cinderella vocalist/guitarist Tom Keifer has withstood his share of adversity in his career.  After overcoming a paralyzed vocal  chord, through determination and hours of rehabilitation, Keifer’s love for music triumphed above all and he released his solo album The Way Life Goes in 2013.  Along with the album, which Keifer himself thought may never see the light of day, he partook in his first ever solo tour in 2013 to much fanfare and enthusiasm.  Now in continued support of that record, he takes to stages nationwide in 2014 to bring the new tunes along with old classics to the people.  On Tuesday July 29th Keifer came to midtown Manhattan to perform at B.B. Kings Club in New York City with support from Streetlight Circus and Tempt.

As the crowd strolled in from the busy streets, the cities own Streetlight Circus was ready to go.  Established by bassist/singer David Shaw, the band bring a classic rock sound with a modern flare to audiences as they play all over the New York City metro area spreading the word.  Kicking off with a track called “Ghettoblaster”, the band was rocking hard and Shaw expressed excitement to the room letting them know they were in for a great night of music.  Performing older tracks, a cover of KISS classic “Do You Love Me”, and new song “Downside” off their forthcoming record, Streetlight Circus put on a professional set of rock-n-roll that started off the night on a high note.

Next up was also another NYC based band by the name of Tempt.   Comprised of Zach Allen (vocals), Harrison Marcello (guitars, keyboards, vocals), Zak Gross (bass, vocals), and Jimmi Kane (drums); the band bring a youthful take on big riff hard rock.  With vocalist Allen and Marcello barely twenty years of age, they looked at the room of spectators right in the eyes and blew them away.  Evoking a sound that is reminiscent of Dokken’s thick guitars and Mike Tramp’s powerful vocals, the band played songs such as “She Wants Your Love”, “The Fight” and single “Under My Skin”.  Having the crowd on their feet and cheering for more, the band had an impressive hold on the moment and kept it coming with more ripping, guitar-driven tunes.  Making the most of their time, they also played new single “Use It Or Lose It” and closed out with “Aamina” which had everyone singing along.  Tempt is a rock band which have the perfect formula for success; talent, style, and youth.  Their debut EP Under My Skin is out now.

After being treated to two solid hometown acts B.B. Kings Club was packed full of fans ready for Tom Keifer.  Stirring excitement all around, Keifer and his band approached the stage to loud cheers as they kicked off with Cinderella classic “Night Songs”.  Merely giving the wound-up crowd a sample of what was to come, Keifer’s voice was as full and powerful as ever.   Moving into his solo material such as rocker “It’s Not Enough” and touching song “A Different Light”, Keifer poured out his soul bringing each song to life right before everyone’s eyes.

Balancing out the set, he went into another crowd moving segment of Cinderella’s great pieces including “Somebody Save Me”, “Shake Me”, and acoustic based “Heartbreak Station”.  Loosing themselves in the bluesy rock that everyone knew and love from three decades earlier, Keifer and his band made the songs sound as fresh as ever.  Grateful for the support of everyone in attendance, he continued to express his affection through the music; relaxed and collected as he strummed his acoustic guitar and sang “The Flower Song” and “Ask Me Yesterday” along with the complements of his wife Savannah providing supporting vocals.  It was clear to see these new songs are the reflections of a man with deep introspective, conveying the sincere reality of his life.  Touching all and keeping their undivided attention, he then went into a stripped down rendition of “Don’t Know What You Got (Till It’s Gone”.  With inflections that sent shivers across the skin of everyone, it was a heartfelt moment where everyone realized how special this performance was turning out to be.

Changing course and warming up the amps once again, the home stretch of the performance was electrified by a startling intense version of “Nobody’s Fool” along with raunchy newbies “Solid Ground” and “Cold Day In Hell”.  Grooving and moving, everyone was having a blast on the floor chanting toward Keifer.  Returning the praise back onto everyone in attendance, the set closed out with “Coming Home”, “Shelter Me”, the Joe Cocker style edition of “A Little Help From My Friends”, and “Gypsy Road”.  It would be difficult to find a more well put together set covering all areas of Keifer’s career than this.  Compounding it all, he even came out after his performance to personally greet his fans and exchange hellos.  Keifer touched everyone who made the trip into NYC for the show and left them with memories that will last as life time.