This is a turn-up for the books. From Gunpowder & Sky, in 2017, Tragedy Girls has made its way to several festival viewings, including a screening at the Ithaca Fantastik Film festival on the 3rd of November. It is a Horror Comedy with a twist; after being on the wrong end of a machete and more for decades, the teen girls strike back. 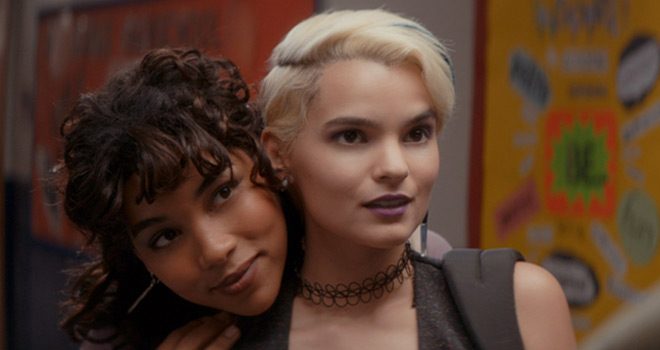 Amateur crime reporters Sadie Cunningham (Brianna Hildebrand: Deadpool 2016, The Exorcist series) and McKayla Hooper (Alexandra Shipp: X-Men: Apocalypse 2016, Straight Outta Compton 2016) are having trouble getting their reputations off the ground in their sleepy town. After they manage to trap a local serial killer (Kevin Durand: X-Men Origins: Wolverine 2009, Fruitvale Station 2013), they come up with a foolproof plan to get @TragedyGirls trending; to murder people themselves to get the scoop first. Fame comes quickly as their killings hit the news, but can they handle the baggage that comes with it? Can their friendship last as they come into the spotlight?

This sardonic story is the second full-length directorial work from Tyler MacIntyre (Secret Identity 2011, Shinny 2012), but is one of many collaborations with Chris Lee Hill (Leash 2011, The People That Touch Your Food series), with a little help from an original screenplay by Justin Olson (Dweller 2018). Sans Olson, the pair had previously done a twist on Frankenstein in 2015’s Patchwork. With Olson, they do a twist on slasher films with a tale of sisterly camaraderie where the girls are more dangerous than the killer.

Not that it is entirely unique in its premise though. Michael Haneke’s 1997’s Funny Games did a similar job in having the audience join the ride from the killers’ side. It could be said that all Tragedy Girls does is put that film in a blender with Saved by the Bell and pour out the resulting smoothie for everyone to taste. They would not be entirely wrong either, but the killers in Funny Games did not quite toy with the audience’s emotions as well as Sadie and McKayla do here. There are moments where the audience feels for them, perhaps even roots for them, until they are quickly reminded of what they are capable of. Their charm disarms them just as much as they do the people in their town. 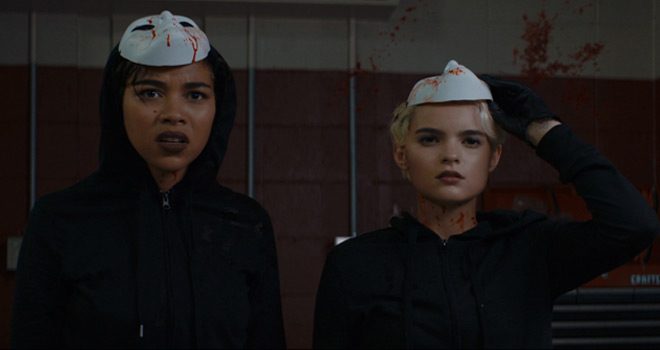 This is also helped immensely by Shipp and Hildebrand’s performances. The way they play off each other would make the audience think they had known each other all their lives off-screen as well as on. Jack Quaid (The Hunger Games 2012, Ithaca 2015) also does well as the unlucky man caught between the two, as he unwittingly unravels their plans while also aiding them as their video editor. Durand’s pet serial killer Lowell is more standard in comparison. He is not too dissimilar to the one from 1998’s I Know What You Did Last Summer, but he adds a touch of confusion to his role – wondering when the predator became the prey. Kudos must also go to Josh Hutcherson (Bridge to Terabithia 2007, The Hunger Games 2012) as the high school hunk. Though it is a cameo in the grand scheme of things, his scenes play off his heart-throb image in a way that is as funny as it is grim.

It could have gone wrong. With the social media presence, high school setting, teen characters, the writing could have come across as well as Steve Buscemi walking in with his skateboard in 30 Rock. Thankfully MacIntyre, Hill, and Olson knew what they were doing. They did not write a story about murderous, millennial caricatures, but cold, calculating humans looking for the right kind of attention. It is this restraint that makes the film more authentic and powerful. It can repel as much as it attracts, as there is plenty of sneery teen banter about sneery teen problems (there is even a preparing-for-the-prom subplot). On the one hand, there are scary killers, and on the other there is Daphne & Celeste. The film manages to balance this dichotomy out well for the most part, but the wobbles are visible. This could make it more appealing, even relatable, for a good chunk of the audience, but another chunk is likely to be less enthused. 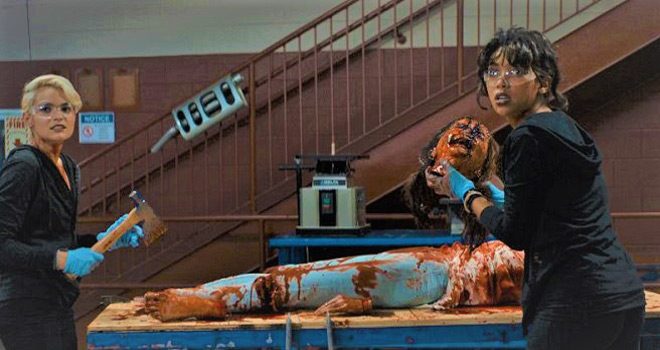 That said, it is worth watching in full to be sure. It has plenty going for it beyond its role reversal and synopsis. The cinematography and soundtrack do a good job together in telling the story, with the right zooms and tracks completing scenes in ways extra dialogue could not. The special effects are realistically grisly and gruesome when Shipp and Hildebrand get to work on an unfortunate soul. Added with the intriguing story and strong acting, it makes a tight and tidy package, even if it has a sweet-and-sour flavor. For these reasons, CrypticRock gives Tragedy Girls 4 out of 5 stars. 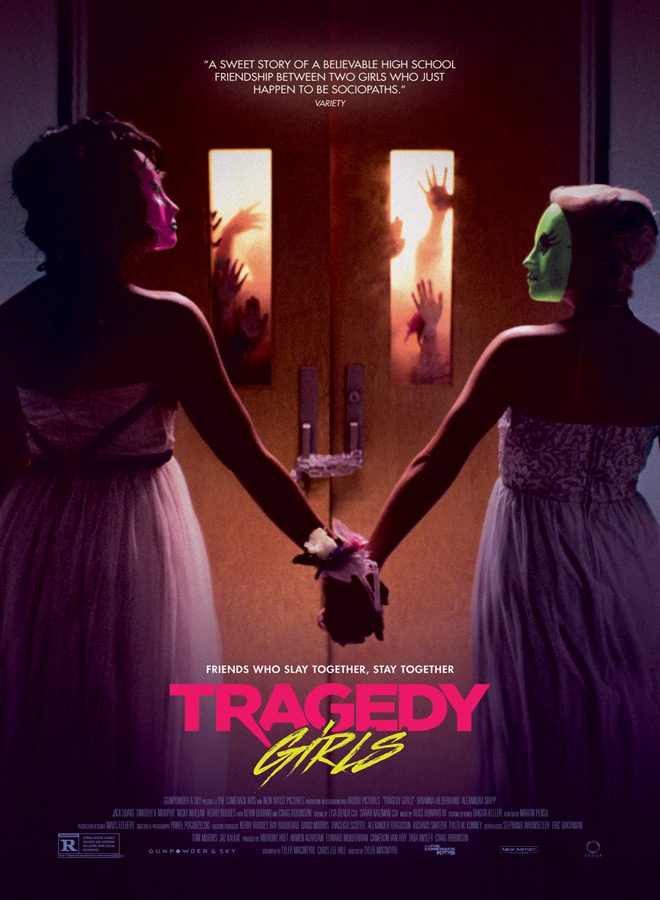