Try to imagine living in a world with no sound. Think about communication. Think about navigating your surroundings on a purely visual basis. You can not hear, you can not make sense of anything audible. Sound exists only in the abstract to you.

This is the landscape of The Tribe, winner of multiple 2014 Cannes Film Festival Awards as well as the debut feature from Ukrainian Writer/Director Myroslav Slaboshpytskiy. In Ukrainian, tilted Плем’я, it has now made its way across various festivals throughout the past few years, landed on DVD in the US in March of 2016 thanks to Cinedigm, and more recently, found its way to Amazon Video and Netflix. 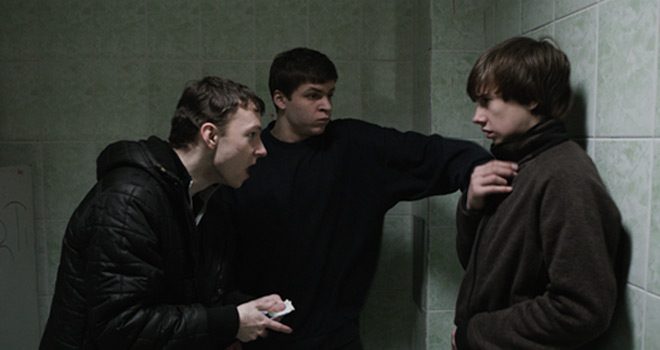 A compelling film, the viewer is given a deeply unsettling glimpse into the grim silence surrounding a deaf student’s rise from boarding school misfit to integral member of an underground crime syndicate. In this world, it is not about what you hear, but instead what goes unheard. Sergey (Grigoriy Fesenko: debut) is bullied upon his entrance to a boarding school for the deaf. Even so, and possibly because he wants to fit in, he is brought into an underground gang to do petty jobs. His status within the group grows quickly, but he never quite escapes his “new guy” state.

The audience must make sense of his journey without any help from dialogue. The Tribe is a story told entirely in Ukrainian sign language without any spoken words or subtitles. It is left to the viewer whether Sergey is a willing participant or a victim of circumstance. Maybe it is both. This cogent moral ambiguity clouds every angle and interpretation of the story and Slaboshpytskiy’s brutal drama never takes hold of the viewer’s hand to even let go. Behavior, body language, and the sounds of the perpetually spinning world around the deaf offer the only ways to understand anything.

Sergey spends the film looking angry. There is no indication he is angry because he is been sucked into this world or angry because he is angry. After all, these kids have all been sent to boarding school. Sergey does what he is told until an accident affords him more agency in the criminal group. He begins to grow close to Anya (Yana Novikova), a prostitute he is in charge of pimping out at a local truck stop. Novikova’s fearless performance suggests that she sees her work as a means to an end. This is where the film’s lines of morality begin to grow hazy. 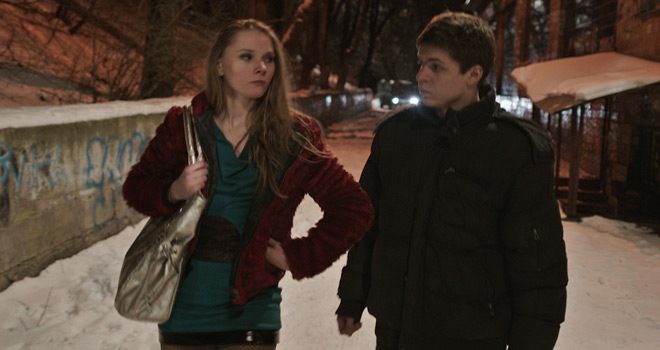 Maybe most of the students see the crime life in similar ways to Anya. It is just a part of living in that school. The irony is that this happens under the nose of this supposedly strict boarding school, with some of the teachers actually involved in the racket. That this all unfolds in a very matter-of-fact, unstylish way (thanks to the naturalistic cinematography of Valentyn Vasyanovych), gives The Tribe the feel of something like a nature documentary.

Vasyanovych avoids close up shots for the film’s duration. Any moments of tenderness in the film are shot as widely as the criminal behavior and horrifying violence. One scene in particular showing Anya making a harrowing decision is so clinical in its detached eye that one could simultaneously call it exploitative yet also note it treats its subject with a profoundly uncompromising dignity. That is the kind of ambiguity that powers The Tribe’s engine.

All of this turns the viewer into as much of an outsider as the deaf students. The audience is at once a part of this world that seems so vaguely familiar in its realism, but is also cut off entirely for different reasons. In some sly political commentary, the film may be suggesting this is something like how Ukraine sees itself in its relationship with the European Union. Keep an eye on who is wearing what, who is looking to leave, and who this sets off. Beyond this, though, it is telling that grim human behavior such as this would be so dispassionately portrayed. 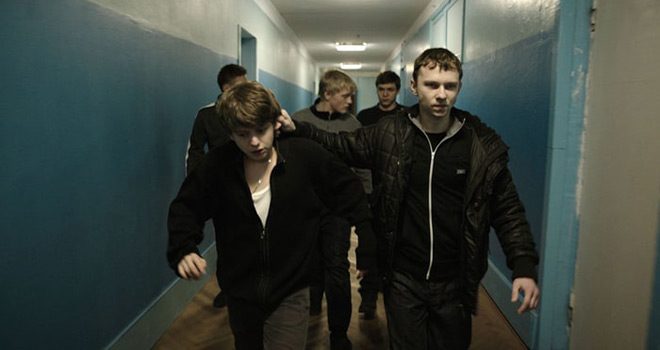 There are no audio cues to tell the audience how they should feel. There is no score at all, actually. Sergey Stepanskiy’s sound design immerses us within the tactile reality of Sergey, Anya, and the others’ everyday life without any guiding music. The viewer is only allowed to hear the crunch of gravel and snow under shoes, howling winds, the machine hum of truck engines, echoing footsteps in hallways and, when late in the film, a situation arises involving speaking people, a cacophonic blob of indistinct voices. It is a world of sound in the abstract, sound that has no context besides setting the most meager sense of “place.” It is bleak visual reality where the demands of communication exact a physical toll any time someone decides they need to “speak.”

Vasyanovych’s camera and Stepanskiy’s audio capture this physicality of the students’ sign language. This in mind, there is something animalistic about everyone in the film. Like the fraying graffiti sprayed all over the ruined, perhaps even bombed-out buildings the students hang out in, the world of The Tribe is a gray one despite any colors one may come across here or there. Perhaps this brutally physical world can only be understood with action. Words would not do anyway. For this, CrypticRock gives The Tribe 5 out of 5 stars. 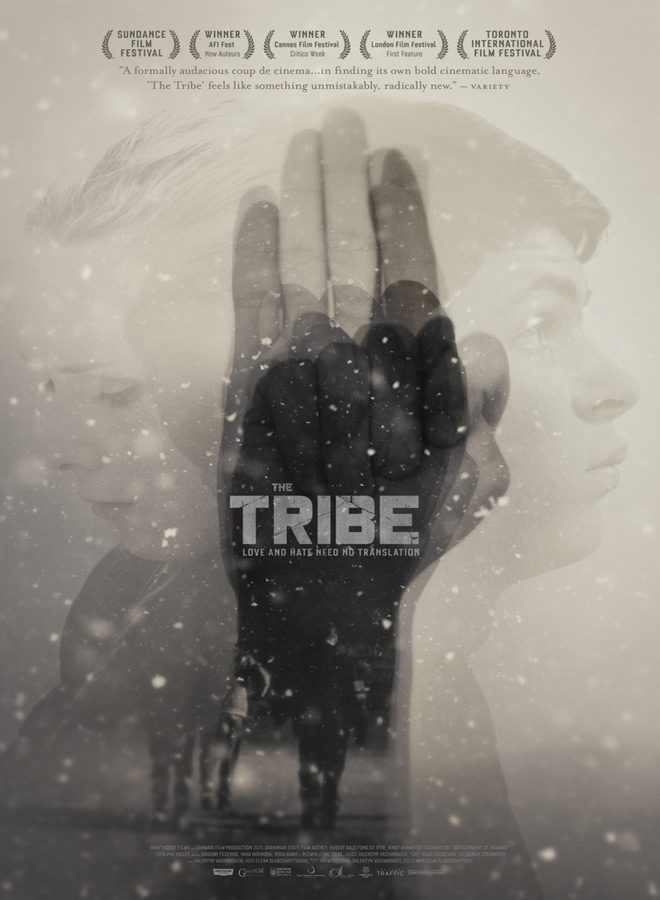