In the beginning of John Carpenter’s seminal independent Horror film Halloween, 6-year-old Michael Myers kills his older sister, Judith, inexplicably on Halloween 1963.  Fifteen years later, on Halloween of 1978, Michael returns to his hometown of Haddonfield, Illinois to finish what he started, setting to snuff out Laurie Strode. Ending with his psychiatrist, Dr. Loomis (Donald Pleasence: Escape from New York 1981, Halloween series), in pursuit staring out second floor window of Michael’s house to find his shot down body was no longer there, viewers were left hanging in suspense. Then, on October 30th of 1981, the night of terror continued with Halloween II.

A film that was a few years in the making, Halloween II was directed by Rick Rosenthal (Halloween: Resurrection 2002), co-produced by creators, Carpenter and Debra Hill, with long-time financier, Moustapha Akkad, in the background, from a script co-written by Carpenter and Hill. Now 35 years later, Halloween II remains a foot-mark for the historic continuation of the Michael Myers saga. Picking up directly where Halloween left off, Michael Myers (Dick Warlock: Halloween: Season of the Witch 1982, Spaceballs 1987) follows Laurie Strode (Jamie Lee Curtis: True Lies 1994, Freaky Friday 2003), the lone survivor of the early evening massacre, to the hospital she is taken to to get treated. The question remains, why does Michael want to kill Laurie so badly, and can Dr. Loomis stop him before he gets to Laurie and the body count rises?

When John Carpenter’s original Halloween cleaned up at the box office with approximately $25.5 million, the studio wanted to fast-track a sequel. Carpenter and Hill saw the original as a one-off until Carpenter thought better of it trying to recoup money he thought was owed to him. His and Hill’s idea was to pick up the story a few years later; however, this was later changed to the same night with the storyline of Laurie being Michael’s little sister, when Carpenter finally got the script inked out. Then, he dropped the bombshell he did not want to direct the new Halloween film, mostly because Carpenter did it once, and did not see the need to revisit it. Initially asking Tommy Lee Wallace, who had been Halloween’s art director, after turning down the spot, Carpenter turned to Rosenthal. Now, he had to get his cast together, specifically to find his Michael and get Curtis and Pleasence back.

Dick Warlock (Escape from New York 1981, The Thing 1982), who had done Michael’s stunts in the original, stepped in to play Michael for Nick Castle. Since, he has come to be considered the definitive portrayal of Michael. Retaining the other cast members, Curtis, Pleasence, Charles Cyphers (Halloween series, Escape from New York 1981) as Sheriff Brackett, and Nancy Stephens (Halloween series, Escape from New York 1981) as Nurse Marilyn Chambers returned to their roles respectively. Then, Rosenthal set out to find his nurses and orderlies, one of which was ambulance driver Budd (Leo Rossi: Maniac Cop 2 1990, Deranged 2002). The rest of the new cast were all starting out actors and actresses, however, they brought it, delivering believable characters.

With the cast settled, filming was on the way come mid April of 1981 and ran through almost the end of May. During this time, Rosenthal desired to keep the elements that made the original film a hit. For example, building suspense over overt violence, blood, and gore, as well as using the first person point of view from the killer. In addition, he also retained Carpenter’s score that had become synonymous with Halloween. However, when the working print was shown to Carpenter, he wanted more violence and blood with even nudity added since other films like the Friday the 13th franchise were on the rise. This would become a detriment when the film was released, as some countries like West Germany and Iceland would not show it. Due to the graphic violence and nudity, this would continue to haunt the film to the 1986 release on video when Norway banned it. During much of the ’80s, an alternative version of the film was aired on network television, editing out much of the nudity and gore. Thankfully for fan sub-sequential home DVD/Video releases through the years, they made an uncut edition available.

Met with extremely mixed reviews, Halloween II has a split audience through the years. Also, while it did not garner as much success at the box office as Halloween, it still out-grossed other 1981 big Horror film releases such as Friday the 13th Part 2 and The Howling. The websites, Rotten Tomatoes and the IMDB, have Halloween II with a 31% fresh rating and a 6.5/10 while it plays yearly during its namesake’s season in marathons. Going on to spawn six more sequels, few know that Halloween II was meant to end the story of Michael Myers. Although, this should have been clear when Carpenter completely shifted the story away from Michael in 1982’s Halloween III: Season of the Witch.

Nonetheless, it seems Hollywood and fans could not get enough of Michael Myers as he returned to the silver screen in 1988’s Halloween 4: The Return of Michael Myers, minus any involvement from Carpenter, Hill, or Wallace thereafter.  Interestingly enough, Carpenter is returning to the fold after being absent from the Halloween franchise with a reportedly new Halloween film set for release sometime in late 2017. Until then, fans can sit back and enjoy Halloween, and yes, the often under-appreciated Halloween II. 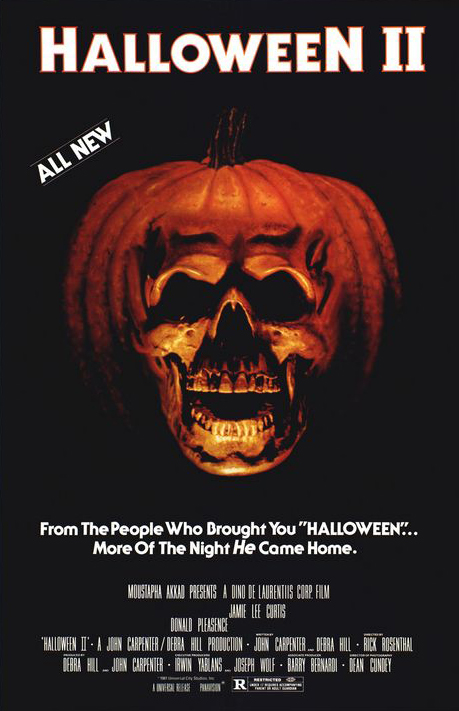