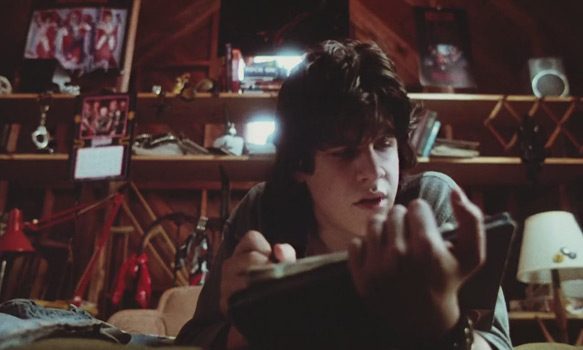 Sammi Curr (Fields) is Rock’s chosen warrior, embodying everything that was Rock-n-Roll in the 1980s. He is a spectacle, he is obscene, and he is Angry. Eddie “Ragman” Weinbauer (Price) is an outcast at school because of the way he dresses and his choice in music. Being Sammi Curr’s number one fan, Eddie writes him letters regularly, telling him how he is bullied. Eddie believes he and Sammi are one in the same because, Sammi went to the same high school and was also bullied, but he got out and became a Rock god.

When Sammi Curr dies in a mysterious hotel fire, Eddie is devastated. He visits the local D.J., Nuke (Simmons), and is given the only copy of the record Sammi recorded right before he died. Overjoyed, Eddie takes it home and listens, but he starts to have strange visions and feelings. After one such vision, Eddie hears strange sounds on the record. When he plays it backwards, Sammi Curr starts talking to him from beyond the grave, guiding Eddie on his revenge against his bullies. However, when Eddie gets in too deep and tries to stop, Sammi has other plans. 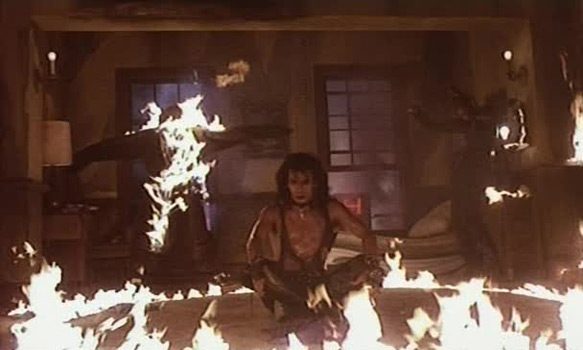 Musicians have been putting hidden messages in their songs for years. For instance, at the end of The Beatles’ “Strawberry Fields,” when the music fades back in, a deep, slow voice says “I buried John” near the very end, playing into the gimmick of various Beatles actually being dead and the ones touring were actually lookalikes.

It may have been edited out of more recent releases of the song on anthologies and such, but it still exists on the double disc blue-cased greatest hits. Other messages were accessed by playing an album backwards, which was called backmasking. This is the case in Trick Or Treat. It is through backmasked messaging that Eddie communicates with his idol Sammi Curr, and gives him life.

Ever since the invention of Rock Music, it has been thought of by some to be the “Devil’s Music.” Trick Or Treat was a film that was representative of the turbulent musical times: big hair, fast music, suggestive lyrics, and censorship. Mary “Tipper” Gore headed the Parents Music Resource Center, which was basically a group of bored yuppie housewives trying to impose their will onto others.

On September 19th, 1985, a hearing with the United States Senate Committee was held where representatives of the music industry, Frank Zappa, Dee Snyder, and John Denver, each testified with strong opposition to PMRC’s warning label system, and censorship in general. Approximately two months after the hearing, the organizations agreed on a settlement in which audio recordings were to either be affixed with a warning label reading “Explicit Lyrics: Parental Advisory” or have its lyrics attached on the backside of its packaging.

Marc Price stars as Eddie “Ragman” Weinbauer, a typical eighties high school outcast who is punished by bullies for his taste in music and clothing being outside the “norm.” He would rather listen to Ozzy and Judas Priest than Debbie Gibson. Price played the role very genuinely. He seems to have a knack for playing the downtrodden, lovable loser. Look at how he played Skippy Handleman from Family Ties. At first, Eddie is enjoying the small time pranks he is playing on the bullies, just to give them a little taste of the humiliation he’s had to deal with for years. 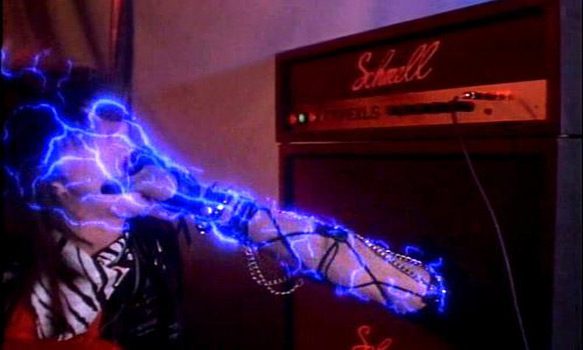 Although, when things start to get a little too intense, he backs off, showing that even though he has a mean-streak, he isn’t above morality, no matter how much he wants to hurt the bullies. Eddie’s idol is a Heavy Metal god, Sammi Curr, played by Tony Fields, who was classically trained in all types of dance and gymnastics. He even served as a Solid Gold Dancer on Solid Gold TV series from 1980-1984.

He seemed very comfortable playing the part of an ’80s Rock idol with the big hair, spandex, and acrobatic onstage feats. However, the role called for Fields to be much more sinister, and he accomplished this very well. There was a part early in the film where the television is showing archival footage of Sammi arguing with a senator, in the vein of the PMRC hearings, where he gets very angry and makes threats.

There is even a particular poster in Eddie’s room where Sammi is looking down, and everything just lines up, giving Sammi an unsettling appearance. Lisa Orgolini plays Eddie’s love interest, Leslie. She’s the out-of-his-league dream girl, who is friends with Eddie’s bullies.

She laughs at their immature antics, but things are taken a step too far when Eddie ends up naked and humiliated in the girl’s gym, and she no longer finds it funny. She shows she is can be nice by trying to make amends with Eddie and inviting him to a party, which goes awry when he arrives. Throughout the film, she tries to make it up to him, which shows her gentle nature. Gene Simmons plays Rock DJ, Nuke, whom he modeled after Wolfman Jack. Finally, Ozzy Osbourne plays the small part of the Evangelist Aaron Gillstrom, who is very against Rock-n-Roll and the polar opposite of Ozzy Osbourne, who is known for his wild stage presence and drug use.

For only having very limited time on-screen, Nuke may be the most mysterious character in Trick Or Treat. By watching his body language and eyes, one could gather that by giving Eddie the album, Nuke knowingly planted the seed for Sammi Curr’s return. On the surface, it appears that he is just doing a favor for a fan and friend, but when Nuke is nowhere to be found later in the film and has left the album playing backwards on repeat over the air, one can surmise that Nuke was in on it from the beginning. When he gives the album to Eddie, Nuke says, “He’s in here.” Eddie asks if he is going to play it, to which Nuke replies, “Midnight. Halloween. That was Sammi’s idea.” Near the end on the radio, Nuke announces, “In honor of the late Sammi Curr, we will be playing this first track backwards.” 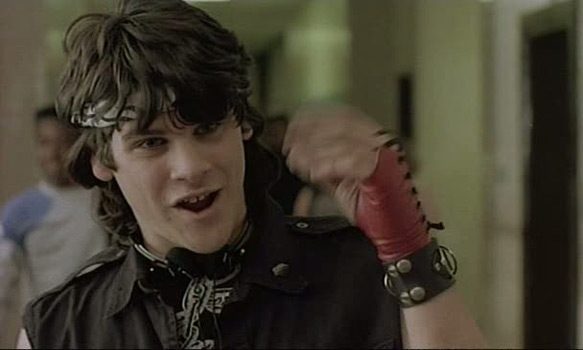 The role of Sammi Curr was offered to two people: Blackie Lawless of the band W.A.S.P. and Gene Simmons of KISS. Blackie Lawless was going to play the part and even offered to do the entire soundtrack. However, when producers advised that Fastway was going to do the soundtrack and Blackie would lip sync, Blackie refused the role, saying to that he did not need Fastway’s music when he has his own band to do the music. Producers also tagged Gene Simmons to play Sammi, but he did not care too much for the script.

Grossing approximately $6,797,218 at the box office when released in 1986, it was released on VHS by Karl-Lorimar home video the following year. Finally released on DVD in the United States by Platinum Disc Corporation in 2002, the fullscreen version is currently out of print.

Some people believe the DVD cover to be misleading because it shows Gene Simmons and Ozzy Osbourne starring in the movie, when actually they only make very brief cameo appearances. Anchor Bay Entertainment was set to release a 20th Anniversary DVD in 2006, but due to music copyrights, the release was cancelled. It has been released on blu-ray in parts of Europe, but not in the U.S. and, unfortunately, there appear to be no plans to do so anytime soon.

Even after thirty years, Trick Or Treat is far from a perfect film, but it is a fun journey with a decent soundtrack, and good performances that is worth a viewing by any self-respecting Horror buff and Metalhead. 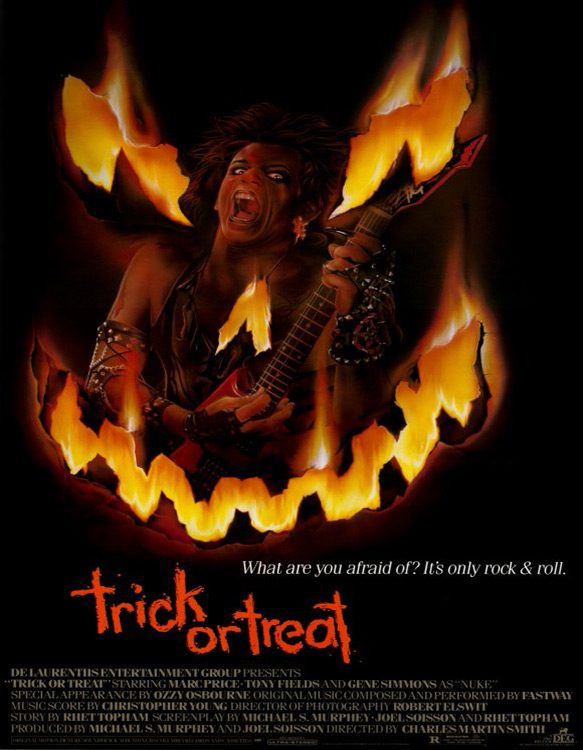