Remember those wild-haired, fluorescent skinned Troll dolls that Mimi (Kathy Kinney) used to collect on The Drew Carey Show? Now they have their own movie, complete with sugar-infused happiness and Justin Timberlake songs. Trolls, which was released November 4, 2016, is an animated, feature length 3D film created by Dreamworks Animations and released through 20th Century Fox. The film was co-directed by Mike Mitchell (Deuce Bigalow Male Gigolo 1999, Shrek Forever After 2010) and Walt Dohrn (Spongebob Squarepants 1999, Shrek 2 2004) from a script co-written by King Of The Hill‘s Jonathan Aibel and Glenn Berger. 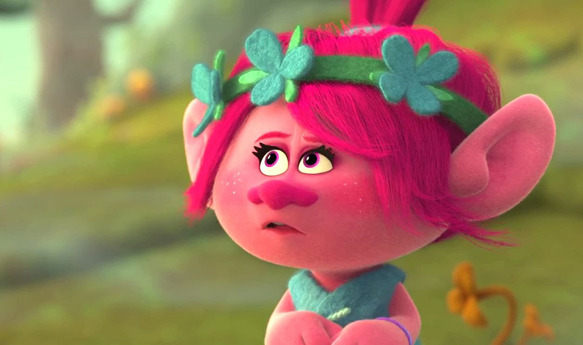 There are some familiar names voicing these rainbow colored characters, with Gwen Stefani, Anna Kendrick, Zooey Deschanel, Russell Brand, Christine Baranski, John Cleese, Jeffrey Tambor, Ron Funches, Christopher Mintz-Plasse, James Corden and the aforementioned Justin Timberlake all lending their recognizable voices to the Trolls and their ilk. The original score was composed by Christophe Beck (Frozen 2013). The Troll dolls themselves were created back in 1959 by Danish Woodworker Thomas Dam, who went to bed poor and woke up very rich indeed.

Trolls are creatures that are perpetually happy. They sing, dance, and play all day. They even wear alarm watches to remind themselves to hug each other on the top and bottom of every hour. Unfortunately, the giant, miserable Bergens have discovered the Trolls and have somehow gotten it into their lumpy heads that they can eat the perpetually happy little buggers like living Prozac in order to feel happiness. The Bergens fence off the entire Troll village and, once a year, every Bergen eats one Troll to get its yearly dose of tra-la-la. On the day Bergen Prince Gristle Jr. (Mintz-Plasse) is about to taste his first Troll, the maniacally happy critters, led by their King Peppy (Tambor), escape underground. 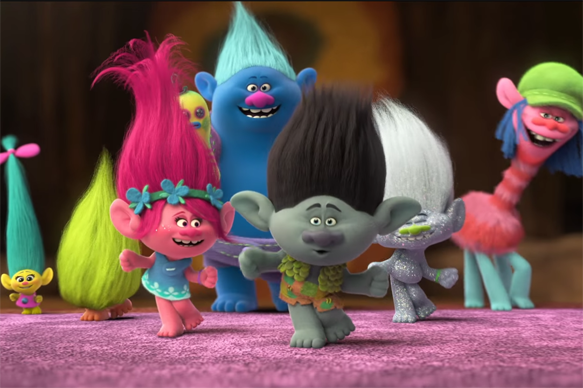 Twenty years later, the Trolls are still happy about their escape and Princess Poppy (Kendrick) decides to throw a party, despite the fact that her grumpy buddy Branch (Timberlake) thinks the noise will attract Bergens. She pooh-poohs him and throws a celebration to end all celebrations. Unfortunately, the cheers of the Trolls soon turned to shrieks when the Bergens were, in fact, drawn to the party noise and proceeded to capture a bunch of them. Most of the glittery guys are too afraid to try and save their fellow brethren Trolls… all except Princess Poppy and her reluctant dark cloud Branch.

Trolls is pretty twisted for a kids’ film. In this age of addiction and instant gratification, it is surprising that a movie about monsters that are addicted to eating shiny, happy, jellybean-colored critters in order to feel good passed through the sensors. Is showing kids that all they need to do to feel better is pop a couple of candy flavored Troll tablets the message society wants to send? Sure, it all ends up well and good at the end, but still. It is interesting to see such a dark and multilayered film shoved into such bright and sparkly packaging. Maybe this is a sign of the changing times. Or maybe riding the coattails of the Minions‘ success was a treat too tempting to pass up. Whatever is the case, if there are Troll candies in stores this holiday season, think about what you are eating first before biting into one. 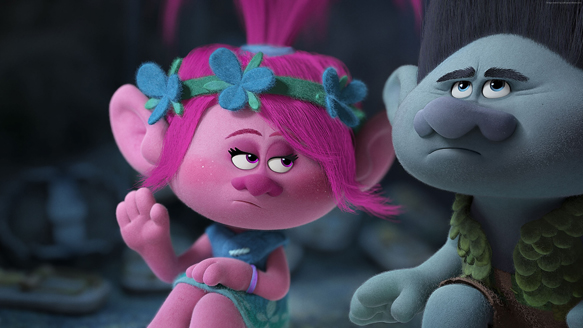 Trolls premiered on October 8, 2016 at the BFI London Film Festival and was then released theatrically in the US on November 4th. So far, Trolls has received mostly favorable review by critics. At this time, the movie’s $125 million budget is well on its way to being doubled, pulling in $227 million at the box office in only two weeks. As one of the very few kids movies in theaters right now, Trolls has a pretty good chance of raking in most parents’ money, despite its underlying dark message. CrypticRock gives Trolls 2 out of 5 stars. 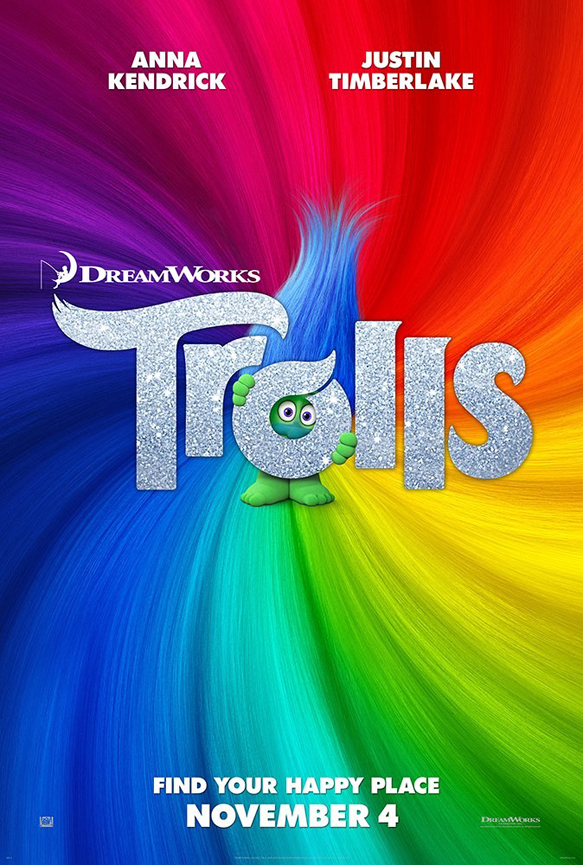