There’s no place like home; you can’t go home again. Such is the paradox viewers faced on Sunday, September 3, 2017 watching the two-part finale of Twin Peaks: The Return on Showtime.

The first thirty minutes of Part 17 tend more toward the ruby-slippers version of things. By the episode’s midpoint, there have been happy reunions, surprise heroes, and an almost too-easy victory over evil. From here, though, the episode takes on a more somber tone. Agent Cooper (Kyle MacLachlan: Twin Peaks series, The Doors 1991) warns his friends (and the audience in turn) that “There are some things that will change. The past dictates the future.” Nevertheless, he proceeds to travel back in time to rescue Laura Palmer (Sheryl Lee: Twin Peaks series, Vampires 1998), thus altering the course of history for everyone associated with Twin Peaks. Here’s where things go wrong. 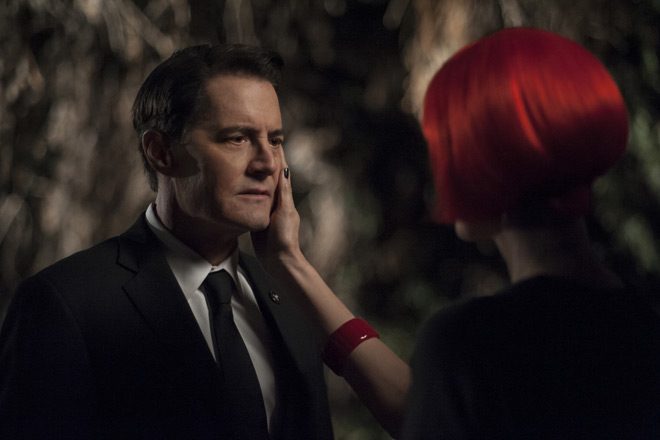 At 10:30 am on October 3, 2014 original Twin Peaks Creators David Lynch and Mark Frost simultaneously tweeted the following: “Dear Twitter Friends: That gum you like is going to come back in style!” Lynch’s Tweet had an exclamation point, while Frost’s did not; both concluded with the hashtag #damngoodcoffee. While a cryptic statement about gum might not mean much to most, around the world Twin Peaks fans rejoiced. After the cliffhanger ending of Season 2 and the show’s subsequent cancellation in 1991, there would finally be a third season. On October 6, 2014, Lynch and Frost posted another coordinated Tweet: “Dear Twitter Friends … It is happening again.” This time, accompanying the #damngoodcoffee hashtag was a link to a Showtime teaser announcing the series’ return, which was slated for 2016, calling to mind something Laura Palmer said to Special Agent Dale Cooper in the final episode of Season 2: “I’ll see you again in 25 years.”

Although Twin Peaks: The Return did not air until May 21, 2017, the show’s existence still retained that sense of perfect serendipity. It seemed almost as if Lynch and Frost had been planning this from the beginning, leaving viewers hanging just so they could orchestrate a surprise comeback decades later. Fan responses to the early episodes of The Return were uneven, but mostly hopeful. Without actual time travel, most knew, it would be impossible to truly recapture the feel of the first two seasons. As viewers acclimated to new characters and settings, responses grew more positive.

There were deeply poignant moments, most notably in the late Catherine Coulson’s character Margaret Lanterman (better known as The Log Lady) saying her final goodbyes to Hawk (Michael Horse: Twin Peaks series, Spirit: Stallion of the Cimarron 2002). In the hands of another director, the casting of a dying woman in the role of a dying woman might have been in poor taste. In the hands of David Lynch, Coulson’s scenes served as a beautiful tribute to a friend. The show also boasted moments of brilliance, like Part 8, which could easily function as a stand-alone film. Episodes were liberally sprinkled with winks and nods to long-time fans, and sometimes the creators gave us exactly what we wanted exactly when we needed it. For example, the building frustration over Cooper’s prolonged fugue state only made his awakening in Episode 16 all the more rewarding. It looked like the finale was shaping up to offer even bigger rewards. 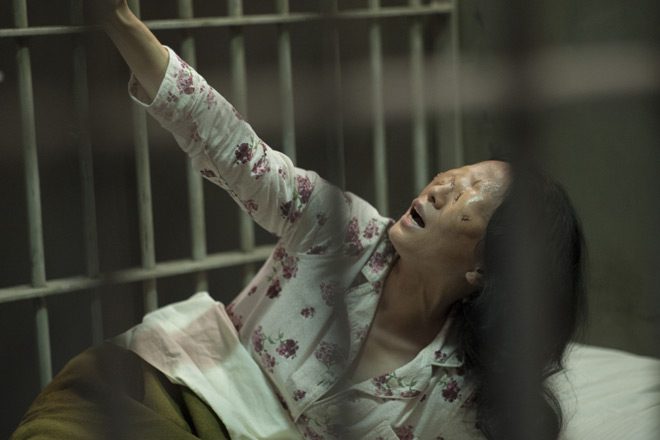 …or is it future?

In Parts 17 and 18, though, David Lynch seems to ask the viewer “Do you really want to go back?” or better yet, “Do you really want me to end this?” The series concludes much like Season 2 did, with plotlines abandoned and what appears to be a cliffhanger. This time, though, it was intentional. Understandably, viewers are divided. Some have praised the finale as a possible meta-commentary on the relationship between creator and consumer, or on the nature of television as an art form itself. Others are furious, feeling as if they have been cheated, their devotion to the show taken for granted and mocked. Many long-time Lynch fans claim this kind of ending was just about what they were expecting.

It is unlikely that anything about The Return was meant as an affront to fans. The creators have simply told the story they wanted to tell. It’s worth noting that David Lynch considers himself, above all, an artist. His first love was painting – an activity to which he still devotes a majority of his time today – and his affection for this particular form of expression is evident in his on-screen works. Lynch does not just write and direct; he paints moving pictures, using actors and stories and sets as his media. When the viewer takes into consideration the fact that Lynch is primarily concerned with the sensory aspects of storytelling, his work makes more sense. Even when a painter has a concrete idea of what his final product should look like, the sketches and strokes he lays down as he works do not resolve into a coherent image until the painting is complete.

In narrative media, however, there is no single moment in which the completed canvas is unveiled. Twin Peaks is the process of layering colors on a canvas stretched across a (so far) twenty-seven year frame. Each scene is a brushstroke born of intuition and inspiration, and it is up to the viewer to determine how all of those colors coalesce into meaning. Granted, some storytellers make it a point to provide audiences with a sense of completion. Lynch and Frost, however, are more inclined to remind us that the only resolution is in death, and as the Log Lady says, “There’s some fear in letting go.”

Whether the finale’s ambiguity is regarded as a gift or an insult, there is certainly no shortage of possible interpretations, many of which carry significant implications as to the fate of our beloved characters. On the first watch, when the shock of that black screen still lingers like Laura Palmer’s (or Carrie Page’s) scream, it might seem as if Cooper is trapped in an alternate reality in which Laura never even existed – only waitress-on-the-run Carrie Page. Cooper finds Carrie in Odessa, Texas, which perhaps not coincidentally was the site of the real-life 1961 “Kiss and Kill Murder.” The victim, Betty Williams, was a seventeen-year-old high school girl whose body was found in a nearby pond. Mack Herring, also seventeen, killed her because she had asked him to. Carrie has troubles of her own. She explains to Cooper that she needs to leave town anyway, so she might as well join him. The dead man on the sofa does not object. Odessa might hold yet another meaning. 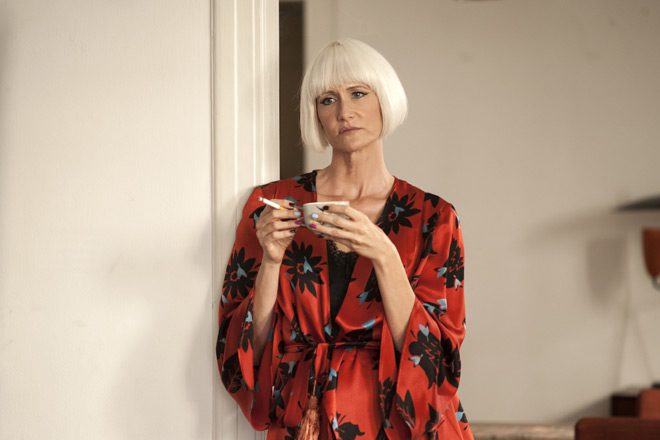 Maybe it’s a stretch, but considering the war commentary in Part 8 and Mark Frost’s affinity for historical allusions, it’s worth noting that Odessa was the acronym for the Organization of Former SS Members, a shadowy network whose function was to help escaped Nazi war criminals begin new lives…under new identities. Odessa reminds us that, in a sense, doppelgangers do exist, and that even with a magic glove, evil cannot be truly eradicated. Fortunately, as long as there are good people willing to resist that evil, the story goes on.

That resonating scream at the end of Part 18 signifies yet another interpretation, one that is tragic, but that at least allows our characters to retain their identities. Carrie hears a distant shout from what viewers recognize as the Palmer house, but which is now inhabited by Tremonds – a family closely associated with the Black Lodge, by the way. A look of horror and recognition crosses Carrie’s face when she hears the shout – “Laura!” Her scream is accompanied by a familiar static drone as the lights in the house flash and go out.

In Twin Peaks, electricity is the key to inter-dimensional travel. It’s what brought Cooper back to himself, and what allowed a variety of characters to access portals between worlds. Possibly, the electrical surge here functions as an indication that it is not Carrie Page screaming; it is Laura Palmer suddenly remembering who she was before she changed her name and moved away. Or it’s seventeen-year-old Laura Palmer waking up into a world in which she experienced devastating trauma. After all, if Cooper did succeed in rescuing her that night in the woods, then what did she face when she returned home?

All that said, a message about the dangers of trying to change the past seems somehow beneath David Lynch and Mark Frost. Maybe they’re saying it is simply better not to dwell on the past. Nothing seems to have changed in the Black Lodge, except that Cooper now navigates it confidently. Perhaps the power failure indicates that he will return there yet again, that he will pass through a different gap in the curtains, emerging this time into a world where he will face a different choice. He might make the trip hundreds of times before things turn out right, and maybe we do not see the ultimate outcome because returning to that night time and again would be tedious. Or maybe those journeys are too numerous and too vast to exist within the confines of a television screen.

We live inside a dream…

Despite the bleak tone of the ending, The Return conveys a message of hope, and of taking comfort in possibility. Consider how alien the early episodes felt – how beige and barren the Las Vegas suburbs appeared in contrast to the lush greenery of Twin Peaks. Remember how in comparison to old favorites like Pete, Audrey, Doc Hayward, and Sheriff Harry Truman, the new characters seemed cold and remote, simply for their unfamiliarity. Still, they grew on us, didn’t they? At some point we found ourselves invested in the lives of Janey-E Jones (Naomi Watts: The Ring 2002, King Kong 2005) and the Mitchum Brothers (James Belushi: Red Heat 1988, K-9 1989 & Robert Knepper: Prison Break series, Hitman 2007); Sheriff Frank Truman (Robert Forster: Jackie Brown 1997, Mulholland Drive 2001) and F.B.I. agent Tammy Preston (Chrysta Bell: Once Upon a Time in China and America 1997, Bird of Flames 2012). 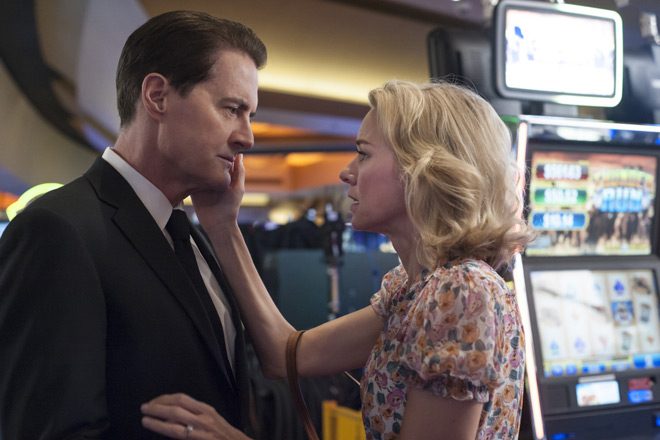 There’s the redeemed Bobby Briggs (Dana Ashbrook: Return of the Living Dead II 1988, Twin Peaks series), ex-wife and love-of-his-life Shelly (Madchen Amick: Twin Peaks series, Sleepwalkers 1992), and their daughter Becky (Amanda Seyfried: Mamma Mia! 2008, Red Riding Hood 2011). There’s Candie (Amy Shiels: The Detour series, Final Fantasy XV 2016), the spaced-out moll with the heart of gold and Bushnell Mullins (Don Murray: Bus Stop 1956, Conquest of the Planet of the Apes 1972), the boss everyone wishes they had. Of course there is Diane Evans (Laura Dern: Jurassic Park 1992, Wild 2014), Cooper’s closest confidant, whose existence in seasons 1 and 2 was nominal, never extending beyond the silent ear of a Dictaphone. By offering us this enchanting new world, Lynch reminds us that while the past might be familiar and comfortable, there might be something equally wonderful just beyond the horizon – or behind the red curtains.

There is no magician behind those curtains, by the way–just two men who see the beauty in the journey and who urge you to recognize your own power. You are the true dreamer; therefore this is your story. There have been countless abstract films whose brilliance was recognized only after the director helped the audience along a bit through interviews and commentary.

Suggest a theory to David Lynch, though, and he’ll commend you for your creativity and tell you that he “hadn’t thought of it that way.” With Twin Peaks, the only interpretation that is wrong is the one that anyone insists is right, so you might as well click your heels and dream a bit until it’s time for the curtain call. Everyone will be there when you wake up. CrypticRock gives Twin Peaks: The Return 5 out of 5 stars. 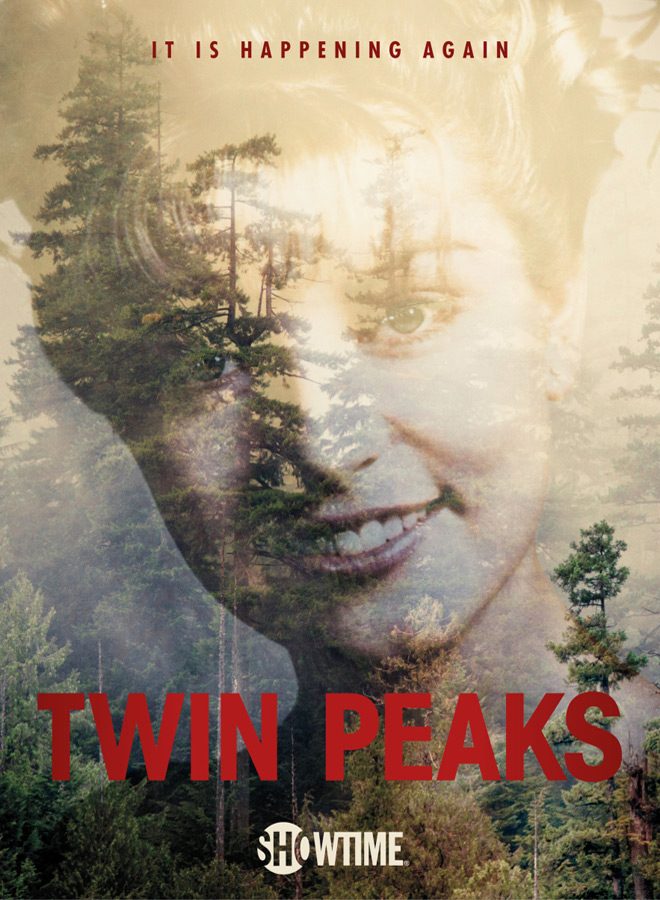