Hallows’ Eve is ordinarily the day filled with couponers frantically hoarding shopping carts full of candy, last minute touch ups to any spooky decorations that the next door neighbor will most likely be offended by, as well as children screaming to sleep in their costumes as they dream about their hopeful smorgasbord of delights. The average person would compare it to the anxiety of Christmas Eve, but with actual monsters ringing the door bell and not just the in-laws. In the music world however, something different was brewing into development.

Writhing its way out of the most ominous month of the year, Disharmony is an album that without a shadow of a doubt is the best trick-or-treat of them all. Based out of Los Angeles are the creators, Twitching Tongues, and although they may have risen from the sunny state of California, their new release creates quite a penumbra.  Having only formed six years ago, Twitching Tongues has taken off in such a way that their reality is every band’s fantasy. Aside from demos and a live recording album, the band has put out three full-length albums (Disharmony being their third), played numerous headliner tours around the U.S, as well as international tours in Europe, Australia, and even Japan. Regardless of the dark undertone found in their music, the band at present looks to have a bright future ahead.

Over the years, Twitching Tongues have wrought the foundation of their being with songs based on love and religion (or lack thereof), with Hardcore and Metal influences. The fabric of their music seems to be threaded darker and denser with each new record released. In contrast to the last two albums that were contracted under record label Closed Casket Activities, Disharmony made its debut with Metal Blade Records that the band recently signed to in April of this year.

When looking up the definition of “disharmony,” you find words like conflict, strife, hostility, the feeling of “bad blood.” All of these terms describe perfectly with what Disharmony has to offer. The most noticeable difference in this new album is Vocalist Colin Young’s transmutation of vocal style; adding in more friction to the already deep, guttural sound he gives. This friction gives way to a more emotional level of screaming rather than singing. Not only this, but the lyrics are unrestricted to become a cathartic statement. Having channeled real-life experiences of turmoil in the process, songs such as “Insincerely Yours” and “Love Conquers None” materialized out of the opposite emotions of love – that which is of hatred.

The acoustics of the band have transformed as well. Originally the guitarist and brother to the vocalist, Taylor Young, presented a Southern-Rock vibe to his style, but has since then matured his melody to a more bludgeoning effect. Harder-hitting riffs are layered to create a vigorous piece within each track, most prominently heard on “The End of Love,” “Cannibal,” and “Asylum Avenue.” These tracks, as well as the entirety of Disharmony, are accompanied by newly added member and additional guitarist, Sean Martin of Hatebreed. This dynamic duo crosses realms with both old and new, further illustrating the meaning of “disharmony,” but in the best way possible.

In the band’s early years of Sleep Therapy (2011) and In Love There Is No Law (2013), havoc within the heart was to be heard and felt. This feeling was established especially in former hits “Insane & Inhumane” and “Preacher Man,” but in a much more organized manner. The preceding albums were structured and their energy controlled, filling almost to the brim, but not quite making it to the top. It would be that very same energy that remained dormant for two years, ready to ascend and bring to light its full potential denominated as Disharmony. Explicitly in the album’s title track, “Disharmony,” everything in the past would be laid to waste; making room for the record single to transpire and be left unconstrained, hammering into the hearts of all listeners and fans alike. The off-key, yet symphonic piano intro seeps in like smoke. A sinister synth is quietly heard before the anticipated breakdown of all main instrumentals and vocals. “Disharmony,” as well as the totality of Disharmony, is like no other that Twitching Tongues has brought into existence. CrypticRock gives this album 4 out of 5 stars. 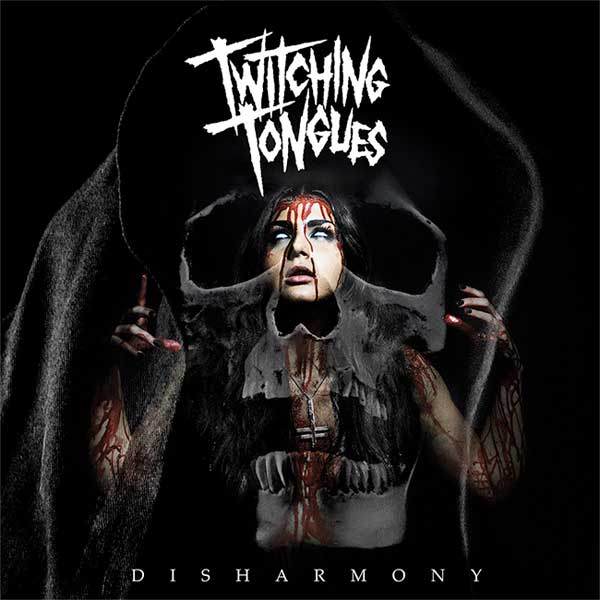 Ghost – Impera (Album Review) Meshuggah – Immutable (Album Review)
Like the in-depth, diverse coverage of Cryptic Rock? Help us in support to keep the magazine going strong for years to come with a small donation.

Sarah Dunn was born and raised on a farm in the metro Atlanta area. Although her love of animals plays an important role in her vegan lifestyle, not once did she dream of continuing a hum-drum life as a small-town girl. Diving into photography early on as a child, and dabbling with creative writing throughout grade school, her calling finally beckoned its way. One Christmas gift at the age of 15 was surely to leave a special place in her heart – a photo collective book titled Punk 365 that displayed an array of bands in America’s early Punk Rock years. After almost a decade of creating portraits of friends, models, landscapes, and still-life, nothing quite stuck out much like live music/concert photography did. It was this that started up her profession in 2013. After much trial and error and a bottomless pit of passion, she finally got it right. Since then bands like The Beautiful Ones, Angel Du$t, Malfunction, and Foundation have asked to use her work for record layouts, shirt designs, flyers, and more. With hundreds of photos under her belt, she strived for more. Documenting these moments between the bands and their audience visually was all out of love, but to write about it was going to take some work. CrypticRock presented to her this opportunity and everything else leading up to this point certainly was not in vain.