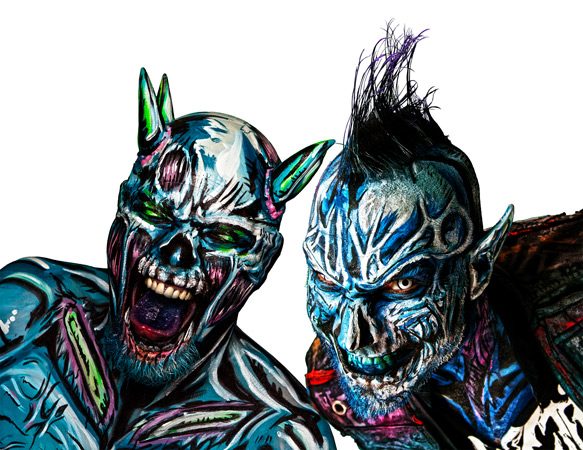 Infamously known for creating infectious flavors of Rap, Rock, and beyond, while not-so subtly moonlighting as the sonic manifestation of a Hollywood Horror flick, Twiztid are Horrorcore legends. Hailing from the Motor City of Detroit Michigan, the duo of Jamie Madrox and Monoxide Child have spent twenty plus years developing their unique macabre style, helping to define their sub-genre.

Debuting with the full-length album Mostasteless back in 1997, Twiztid have since dropped one impressive album after another. Now carrying the momentum from 2015’s The Darkness, they return with their brand new album, The Continuous Evilution of Life’s ?’s. Hitting the public January 27th, it is their second record via their own label, Majik Ninja Entertainment.

While The Darkness debuted on the Billboard Top 200 charts at #29, with vibrant lyricism, symphonic beats, and fantastical makeup, Twiztid encapsulates the essence of late ’90s Horrorcore magically. Yet, Twiztid goes way beyond the paint on their face as they prove once again on The Continuous Evilution of Life’s ?’s . In fact, Madrox stated, “When talks of The Continuous Evilution of Life’s ?’s first came up, we really wanted to turn up the volume, mix everything up, and push our very existence (musical, spiritual and physical) to its full potential to really focus on how we have evolved over the years,” of Twiztid on the new album. So how does it all add up?

The Continuous Evilution of Life’s ?’s features twelve brand-new songs, four of which feature a clear Hard Rock influence with production by Davey Suicide and his Keyboardist Needlz. In addition, touring Twiztid Drummer Drayven of Static-X and Davey Suicide provide the backbeat on the album. Although, Twiztid are no stranger to infusing genres. The duo have been open to experimentation for some time now, and the album’s single, “Nothing To You,” can be placed into one of the many genre-bending fusions of Rap and Hard Rock that the duo illustrates on several of their releases.

In addition, The Continuous Evilution of Life’s ?’s contains some really sonically sound tracks. For example, single “Psychomania” includes an infusion of hard-hitting, raw synth beats that is equal parts dirty and heavy. The verses are driven by a coy lyricism and a solid hook that flow ever-so easily. Other highlights include album opener “Barely Surviving (Ride or Die),” a song which takes a different path than most of the others that follow. Drawing influences directly from the classic Rap game, Madrox and Monoxide Child grumble about the world around them to a deliciously ’90s chorus.

Furthering their diverse sound that is displayed on the album, the duo then takes a completely different spin with “Are You Insane Like Me.” Deriving from subtle Metal and Electronic influences, additional vocal effects create a Marilyn Manson-like performance as the chorus spits out the title repeatedly.

It is without a doubt that the Detroit natives of Twiztid have come into their own on Majik Ninja Entertainment, and one can only expect the best moving forward. Different than 2015’s The Darkness, it is a killer collection of fresh new sounds. Coupling classic beats with heavy synths and Metal/Blues notes, the sky is the limit for these Rap veterans. Making a bold statement, Twiztid’s The Continuous Evilution of Life’s ?’s deserves 4 out of 5 stars. 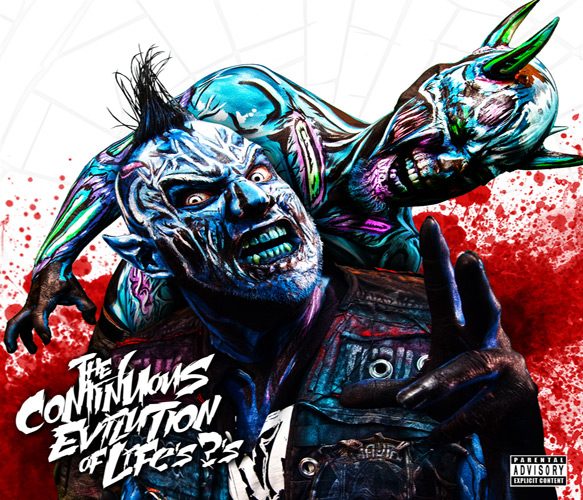