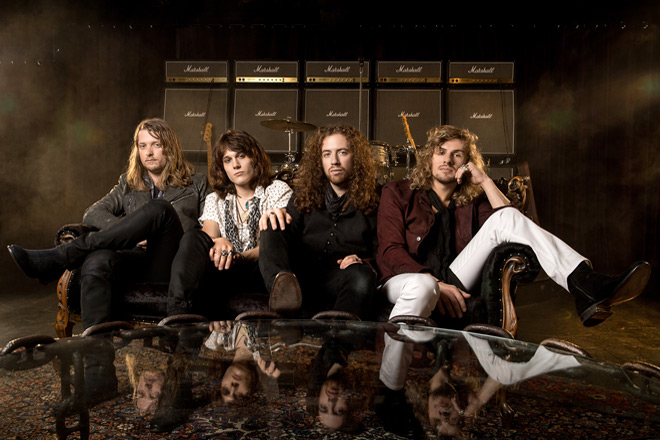 Some people are just born with a purpose. Take Texas born Tyler Bryant who had his first guitar by the age of 6. For most kids that age a toy, by 11 he was so enthralled in the music he sold off his dirt bike to buy his first electric guitar. It soon became evident that this kid was not just ‘playing around’, no, he was ready to Rock-n-Roll! Turned on to the Blues at a young age, Bryant would go on to launch his own band while in his teens before relocating to Nashville, TN to form a new band. Teaming up with Caleb Crosby, the guitarist and drummer immediately formed a band known as The Shakedown.

Thereafter, the picture began to come into focus with the addition of Graham Whitford (the son of Aerosmith’s Brad Whitford) on guitar and Noah Denney on bass. Together, they are Tyler Bryant & The Shakedown, a young American Rock-n-Roll band prime to make some noise. Already having caused a little bit of a ruckus, in 2013 they released their debut album Wild Child.

Then, in 2015, they dished out a killer 6 track EP called The Wayside before being selected to open AC/DC’s ‘Rock or Bust’ World Tour in 2016. Now in 2017, the quartet sign on with recently launched Snakefarm Records. A part of the Spinefarm Records family, Tyler Bryant & The Shakedown act as somewhat of a cornerstone for the exciting new label, and what better way to celebrate the partnership than the release of some new music.

Doing just that, on November 3, 2017, Tyler Bryant & The Shakedown dropped their new album to the world. A sort of fresh start for the band, who found themselves with a label for a brief period of time, they opted to go with the self-titled label. Perhaps acting as a new introduction to fans internationally, the eleven new songs certainly do not disappoint.

Now, for those still fuzzy on exactly who Tyler Bryant & The Shakedown is, besides just a really cool name, think the roots of Rock-n-Roll. That is right – Rhythm, Blues, and a bit of grit. Are they an old school Rock revival? Well, maybe, but this is something very organic and authentic, not contrived. Think old school Rock-n-Roll with a new school attitude, and that is something that connects with people.

Writing and recording their second album as a band, they teamed up with John Fields (Soul Asylum, Paul Westerberg) to mix the songs. Consisting of 11 scorching new cuts, it all kicks off with the single “Heartland,” perfectly setting the tone for the rest of the record. That tone? A Blues Rock explosion that continues on with “Don’t Mind the Blood,” a track full of silky melodies and big guitars guaranteed to get the blood flowing.

Fortunately there is plenty of diversity to be had on the album as well. There is “Jealous Me,” a slightly mellower song, but no less heart-pounding. That in mind, this is collectively a big sounding album. Possessing a Stadium Rock vibe, is it any wonder why considering they have already shared stages with Rock-n-Roll titans such as AC/DC, The Who, Alice Cooper, and Guns N’ Roses? Backing up this statement, on the song “Backfire,” Denney’s Driving bass guitar is as powerful as Crosby’s drumming, at times even more so! Furthermore, Whitford and Bryant’s instinctive guitar playing is a thing of beauty. As for Bryant’s vocals, they are aggressively melodic, and yes, authentic.

Certainly a Rock album, it is no one trick pony, with plenty of highlights. There is “Ramblin’ Bones,” a reverb filled, mellow Blues delight, and there is album closer “Into The Black,” a thought-provoking love song. All in all, Tyler Bryant & The Shakedown are an act that give hope to the future of Rock-n-Roll. Looking ahead to 2018, they have a list of shows in March before heading out to grace the stage of three big American Rock festivals come spring – Monster Energy Welcome to Rockville, Monster Energy Fort Rock, and Rock on the Range. A bright future ahead, CrypticRock gives Tyler Bryant & The Shakedown 4 out of 5 stars. 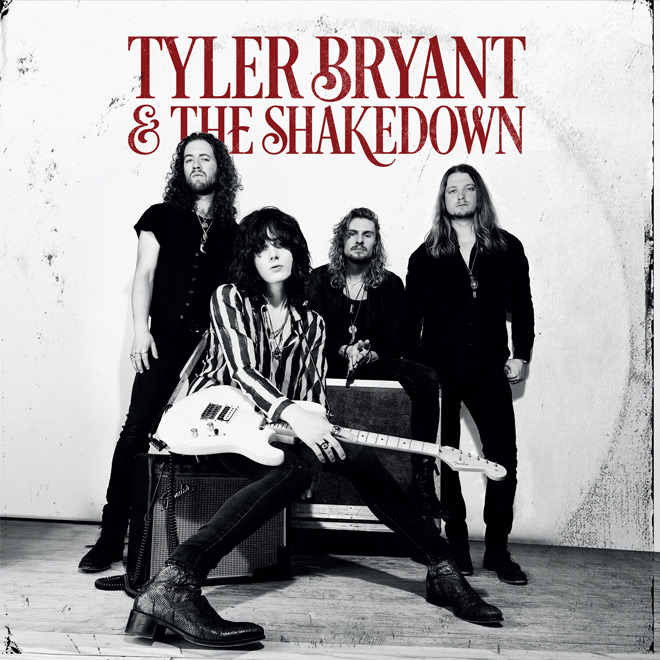