It could take a lifetime to earn experience, but wouldn’t it be something if you could recapture the innocence of your youth somewhere along the way? Such is the question raised with U2’s latest album, 2017’s Songs of Experience. An album that thematically follows up 2014’s Songs of Innocence, Songs of Experience is more or less not supposed to be the end of the tale, but the idea that after naturally shedding our innocence – due to missteps, life lessons, and heartbreak – we can hope at some point to rediscover it later on.

Heavy and compelling, U2 have excelled through the years at bringing subject matter, even at its darkest, to the way of a brighter light. Many listeners have indulged in what the accomplished Irish Rock band has offered through the years – from the times of 1980’s Boy to 2000’s All That You Can’t Leave Behind and beyond. Through it all, and there has been plenty to take in over the course of the past 4 decades, one of the key factors to U2’s standout success has always been the live performance.

Touring the world over year after year, they have never been a band to keep with a standard or traditional stage show. Who can forget the original 1987 Joshua Tree Tour which spawned the documentary film Rattle and Hum or the 2009 through 2011 U2 360° Tour where the band found a new way to present their performance? There is all too much to recall when it comes to U2, but now in 2018, they once again engage the senses with their eXPERIENCE + iNNOCENCE Tour.

Coming off their 30th anniversary celebration tour of The Joshua Tree in 2017, where they visited North America, Europe, and Latin America, in May of this year they launched the North American leg of their latest tour. A run that will also visit Europe, on Monday, June 25, 2018, the excitement arrived in New York City when U2 took over Madison Square Garden. Very generous to the New York City and its surrounding areas, the band first made a visit to Long Island on June 9th, then hosted a special show at the famous Apollo Theater in Harlem on the 10th, before returning on the 25th, 26th, as well as July 1st to play The Garden.

All that in mind, opening night, at what is dubbed the world’s most famous arena, was filled with anticipation, and oh yeah, patrons. Naturally, it was a sold-out affair. Shuffling in just after 7 PM, the crowd entered the venue preparing for the night ahead, but what would it have in store? Honestly, for many in attendance, this would not be the first or probably the last time seeing U2, so most had some indication of what to expect. Fortunately, the collective of Bono (vocals), The Edge (guitar), Adam Clayton (bass), and Larry Mullen Jr. (drums) have always had a knack at changing things up, enough to keep the shows unique. For the eXPERIENCE + iNNOCENCE concert performance there would be much to digest, so let’s get to it.

First of all, to describe every last technological detail of the stage show, lighting, and setup would be bloody boring. Plus, it would defeat the entire purpose of attending the show yourself. Yes, the production and layout was magnificent – no doubt taking hours of tedious preparation and preceded planning. The best way to describe it is to say that the gents in U2 are never in the same place throughout the show’s entirety; they are often so spread out, it is a wonder how they keep the music sounding tight and crisp as if they were right next to one another. Even more impressive, U2 has been highly successful through the years at somehow shrinking massive arenas that hold 18,000-people-plus down to that of a much smaller space. Essentially, they bring the show to the you, exploring nearly every nook and cranny, leaving little empty space between themselves and the audience.

Now with that brief description in mind, one that leaves something to the imagination, let us get to the actual performance itself. Many bands of U2’s fame, and there are few, often stick to a best-of list for their tours, but this band has the guts to perform new material with ease. A blessing because most fans would not be so patient enough nor have the attention span to sit through nearly 2 hours of mostly new material, but U2 fans are of a different breed. 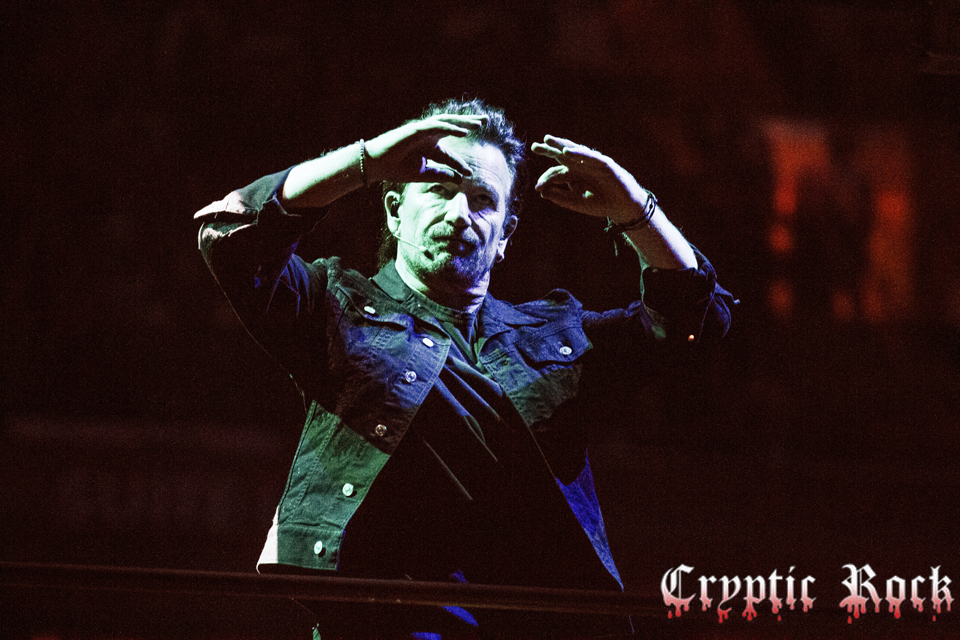 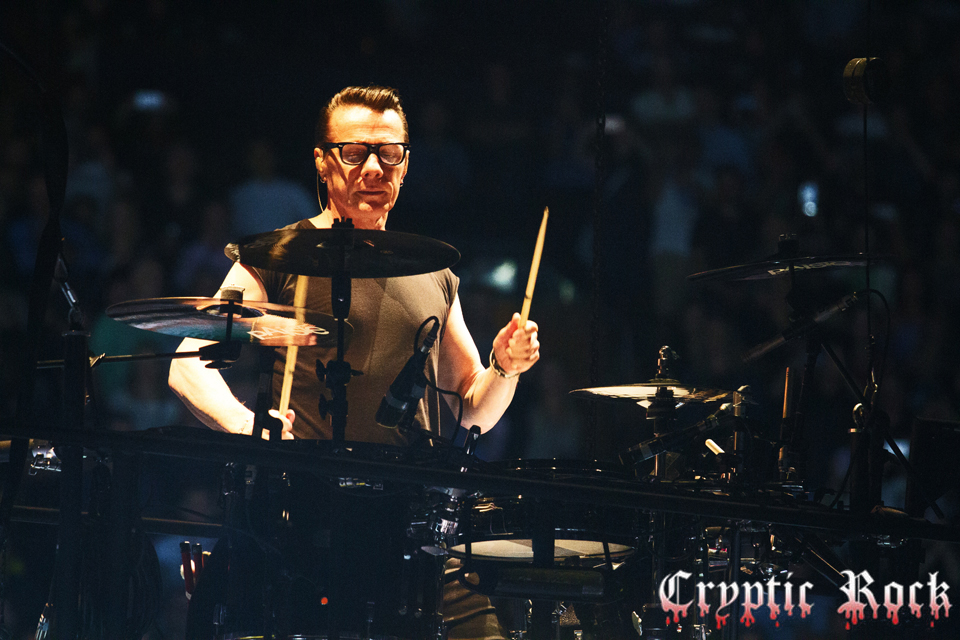 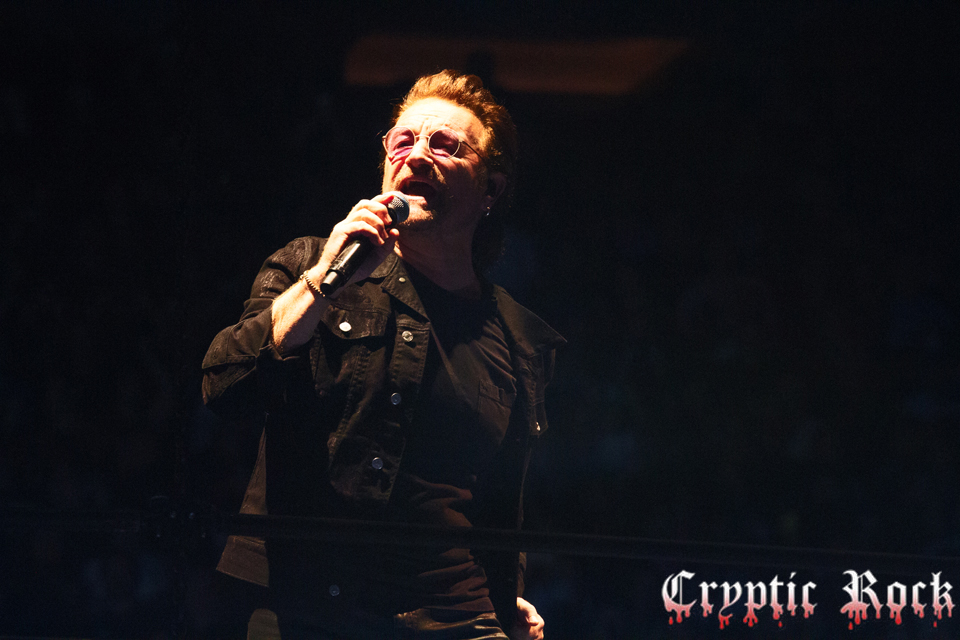 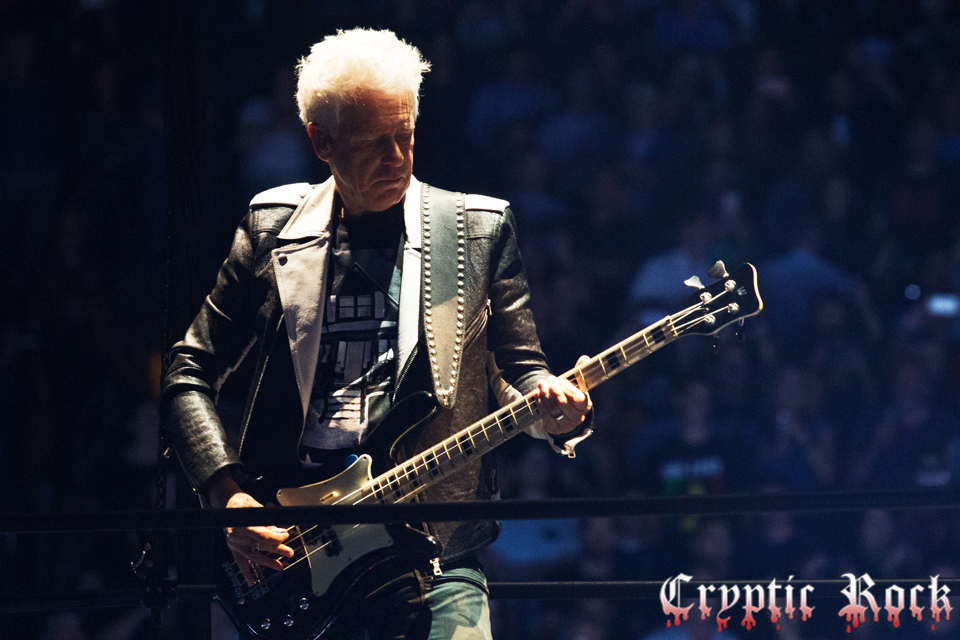 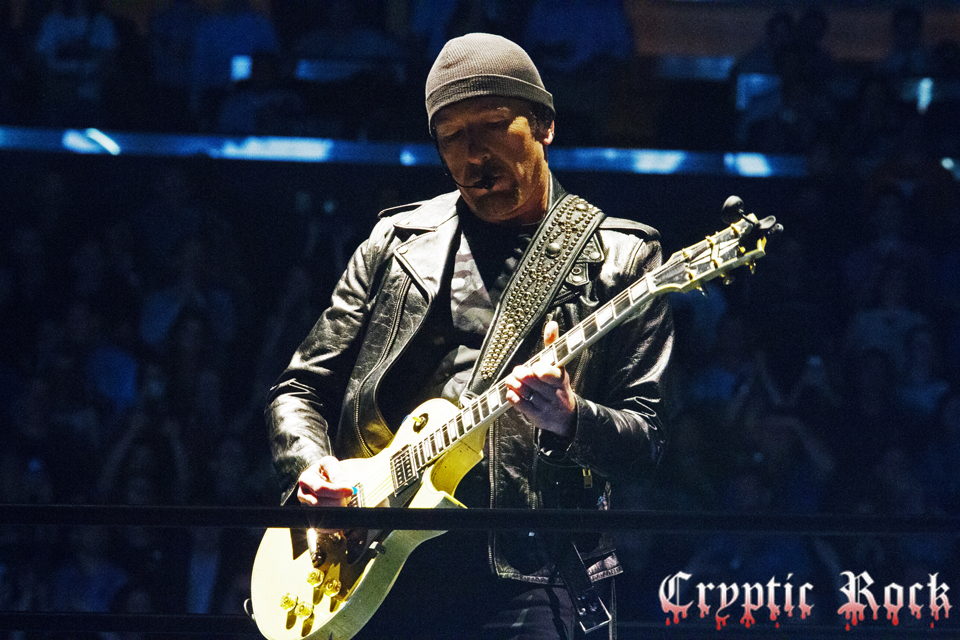 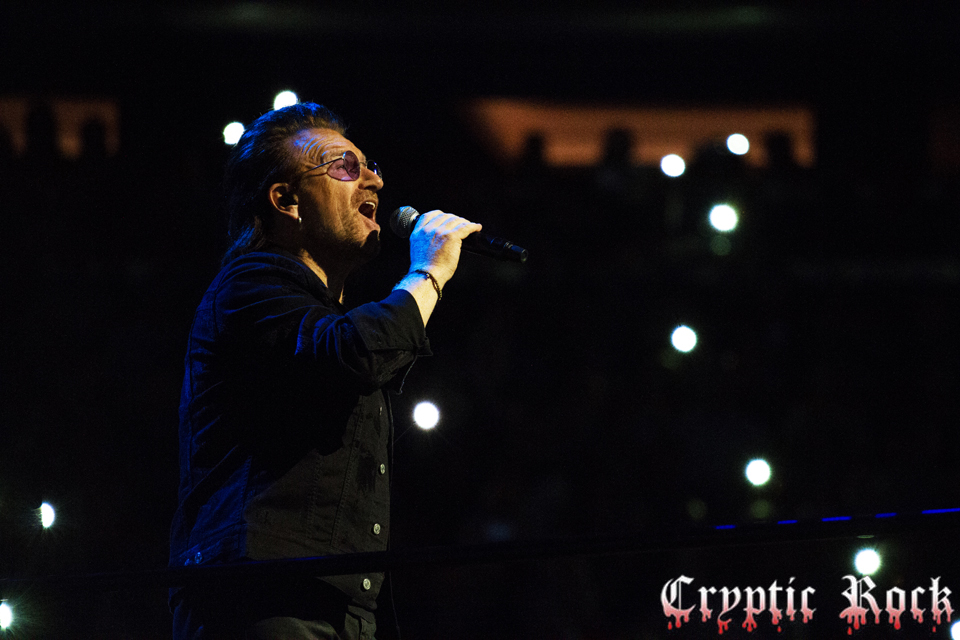 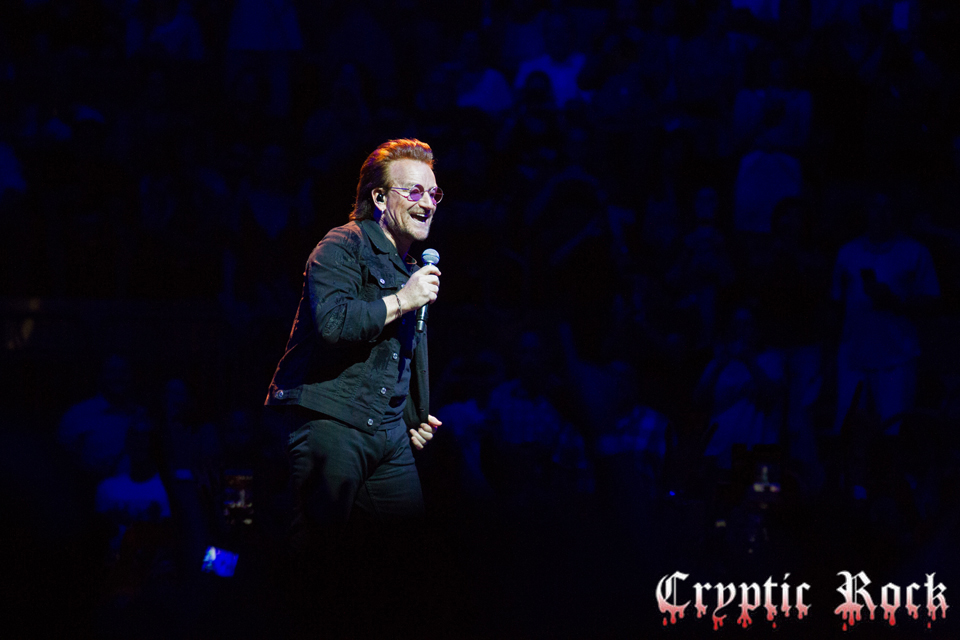 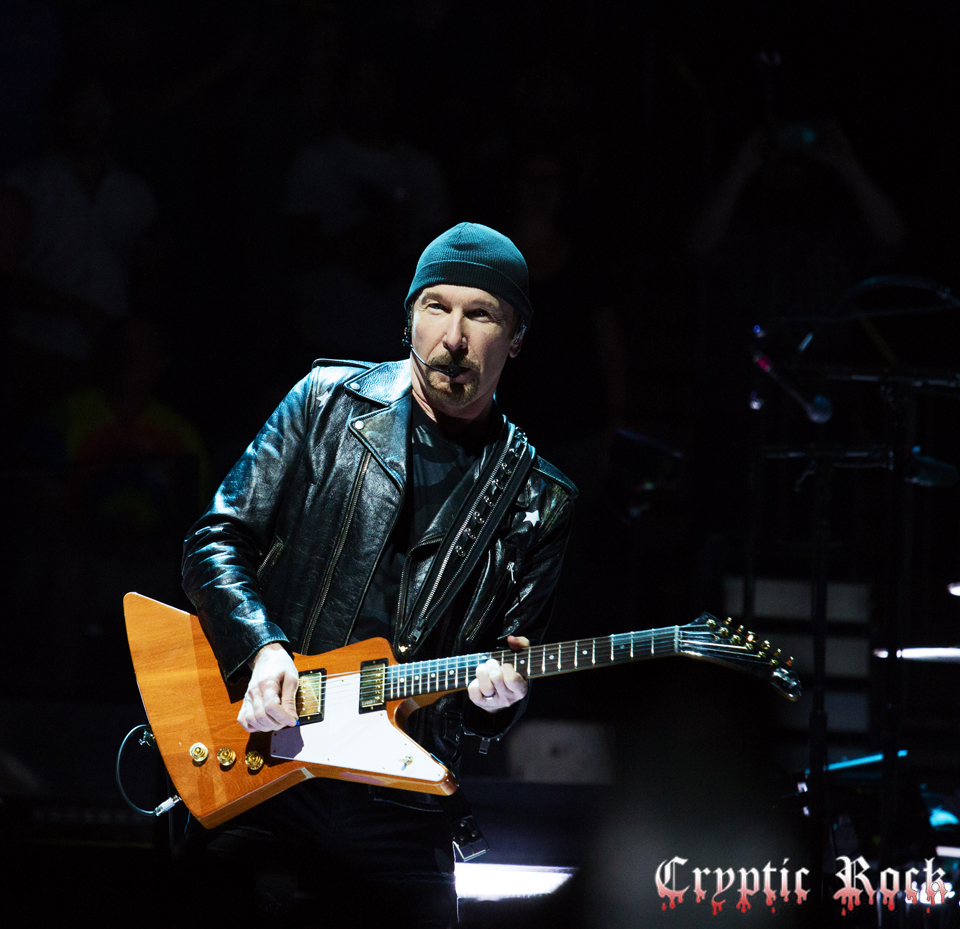 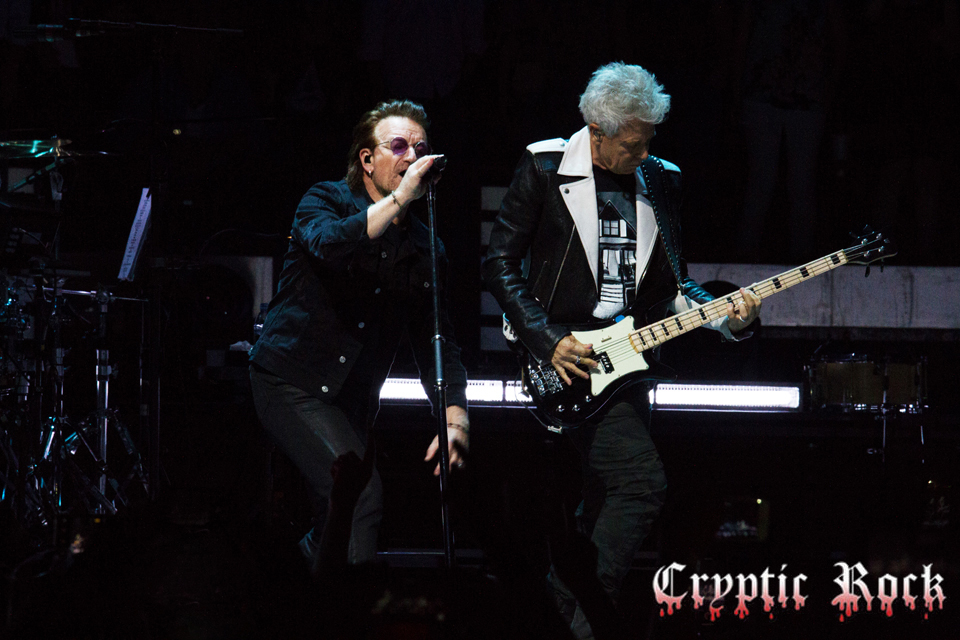 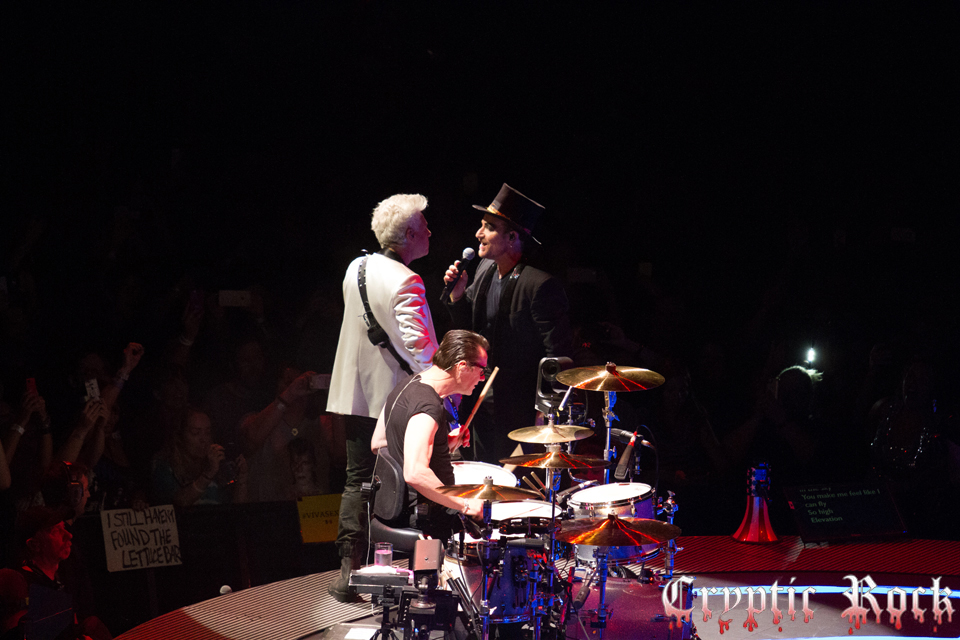 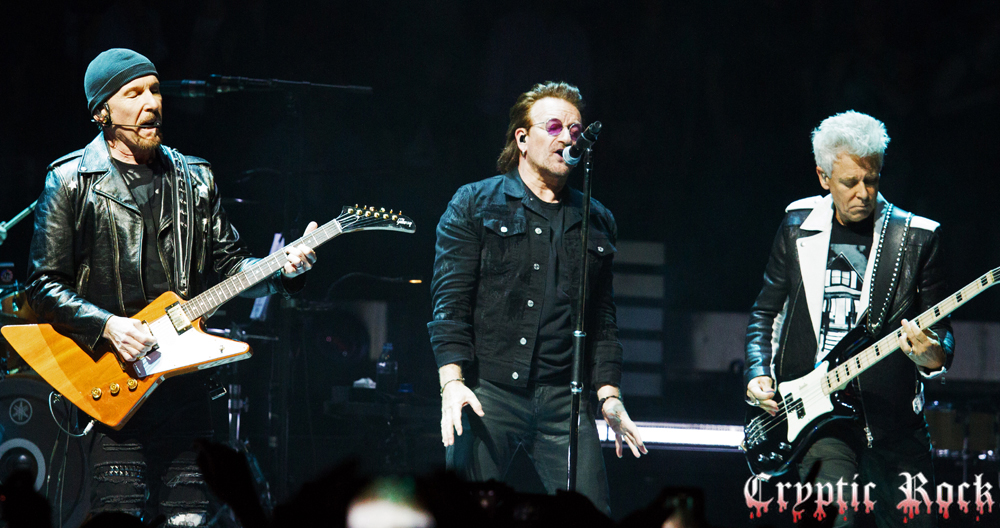 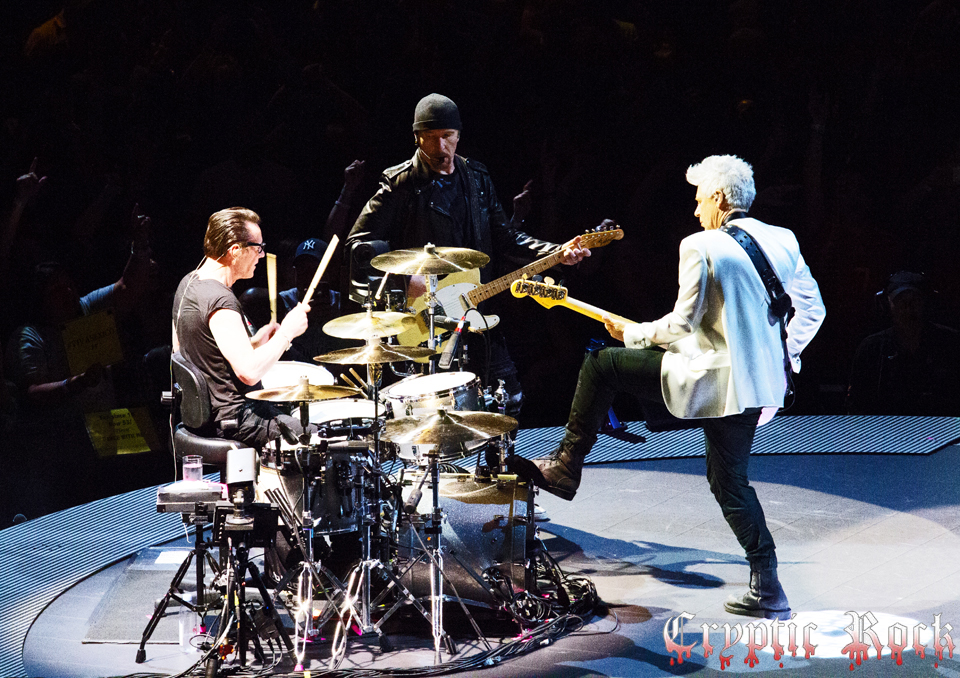 With the luxury of artistic freedom, U2 very much put together a Songs of Experience themed performance, opening with the album’s lead track “Love Is All We Have Left,” going into others including “The Blackout,” “Lights of Home,” and later on, an acoustic rendition of “You’re the Best Thing About Me,” before “Get Out of Your Own Way,” “American Soul,” “City of Blinding Lights,” “Love Is Bigger Than Anything in Its Way,” bookending the night with album closer, “13 (There Is a Light).” Marrying the concept of Songs of Experience with Songs of Innocence, tracks like “Iris (Hold Me Close),” a tribute to Bono’s mom, and “Cedarwood Road,” about the place he grew up, also found their way into the setlist, mixing in quiet well.

Playing through each song seamlessly, Bono himself was very enthralled in the material at hand, offering powerful vocal performances, but also engaging dialogue. Known to not be shy about social and political opinions, the difference between Bono and other performers is he expresses himself in a subtle, nonforceful matter – one that is artistic yet respectful, no matter what you believe. Doing so with his lyrics, matched with the live show’s imagery and his rap between it all, he successfully delivers a message that would have even the most pigheaded individual stop to think twice.

Amidst it all, there was, of course, U2 classics including “I Will Follow,” “Sunday Bloody Sunday,” “Desire,” “Pride (In the Name of Love),” and the unifying “One.” Then, from the newer generation of U2 hits, there was “All Because of You,” “Beautiful Day,” “Elevation,” the electrifying “Vertigo,” and a video intermission with the often forgotten ’90s cut “Hold Me, Thrill Me, Kiss Me, Kill Me.” Over 20 songs performed in total, there was never a dull moment and it all balanced together flawlessly.

Also very much cohesive, and in sync with one another, Bono, The Edge, Clayton, along with band founder Mullen Jr., were professional to the max. Natural after 40 years together, after all this time, for some reason you can still imagine them as the young lads they were in Mullen Jr.’s kitchen when only coming together as teenagers with dreams and aspirations. Which ties into the entire concept between Songs of Experience and Songs of Innocence: it is about a lifetime of learning with hope of recapturing the purity of our younger years. Beautiful, right?

The bottom line is, after all these years, U2 still has something to say, and in terms of their live concerts, very much something to show. If you take away the lights, effects and inventive stage setups, you still have a band that is powerful but also vital in the modern entertainment world. That is why U2 remains at the forefront of Rock-n-Roll fame, and just glancing around the broad age gap of spectators in the audience, they also continue to reach all generations.

There are only a handful of dates left on this leg of eXPERIENCE + iNNOCENCE, including the July 1st show when they return to Madison Square Garden. Recollecting in August, they will be heading over to Europe before concluding in their homeland of Ireland in November. Whatever means it might be by, this is a concert experience well worth the price of admission, so get out there and partake in the experience before it is too late. 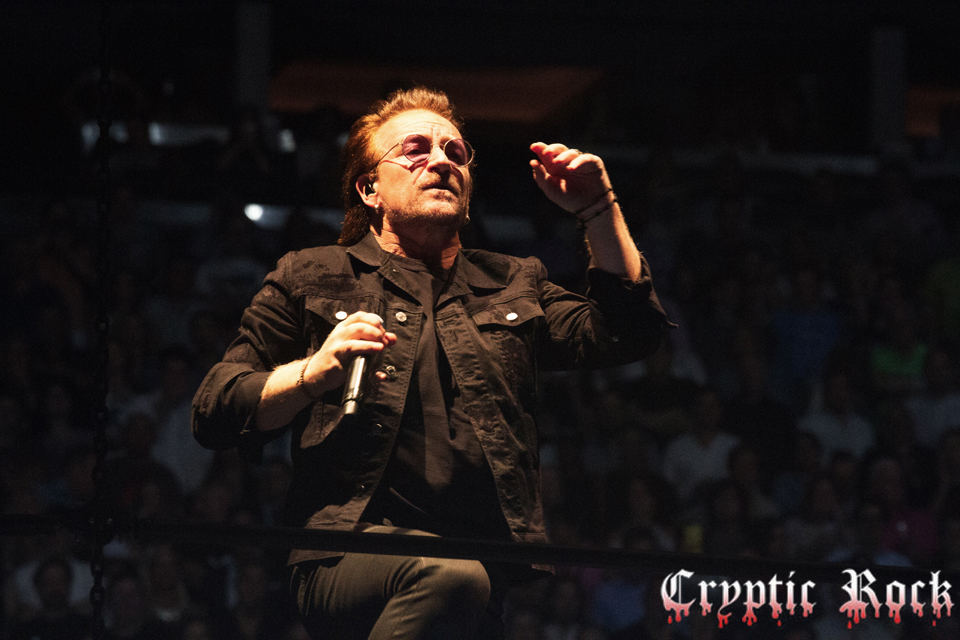 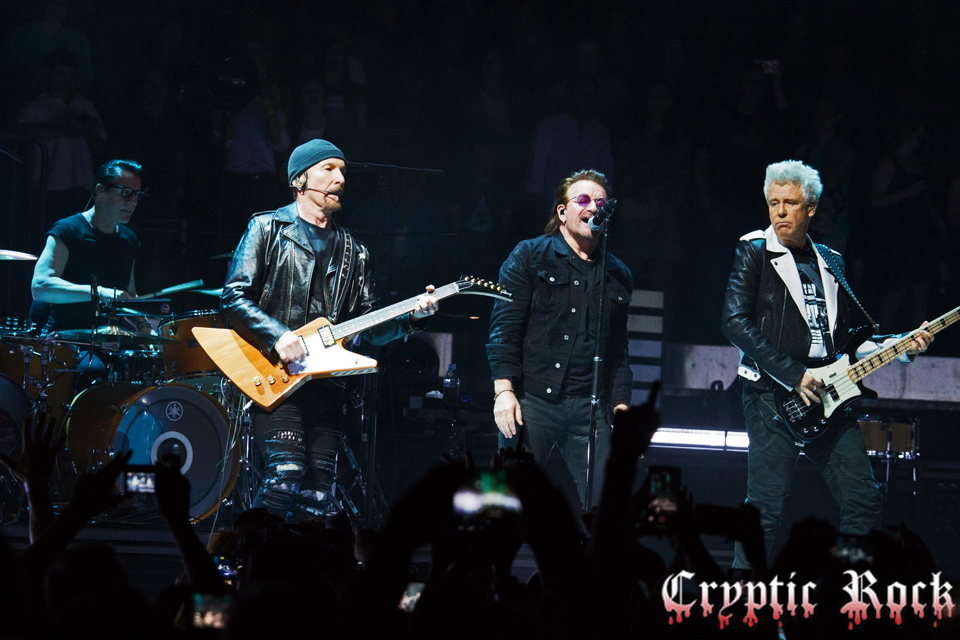 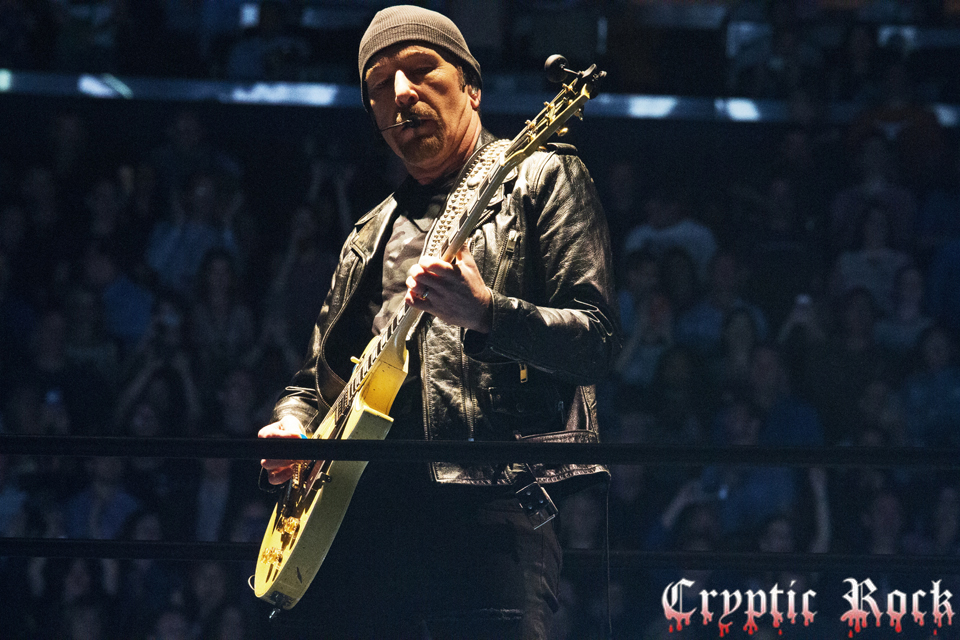 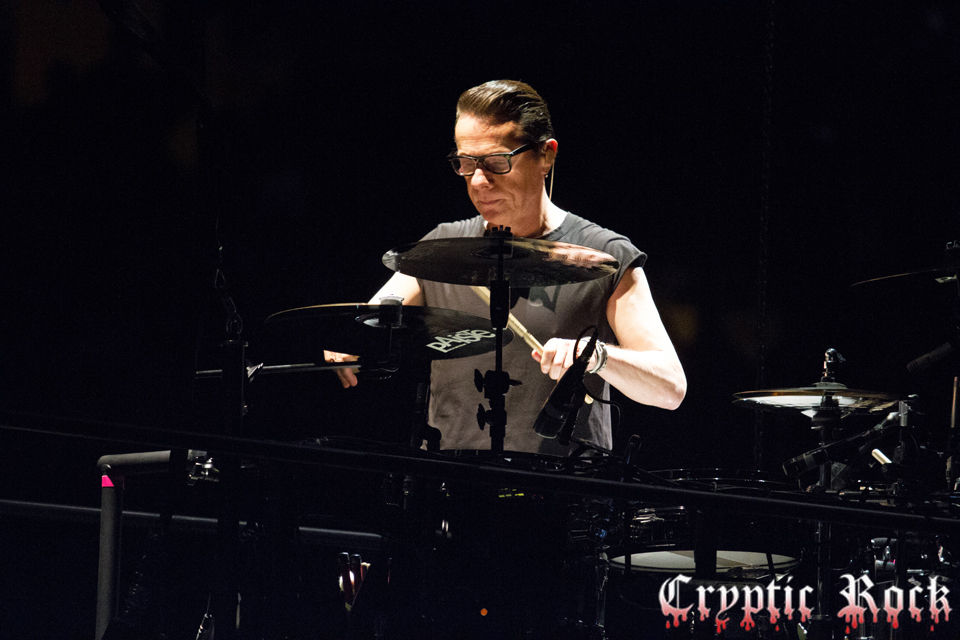 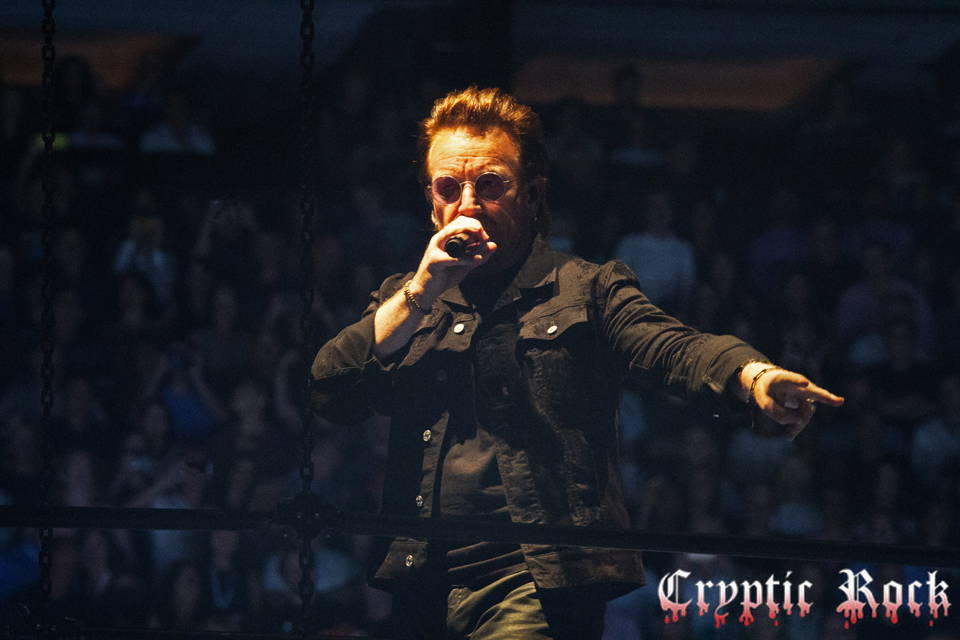 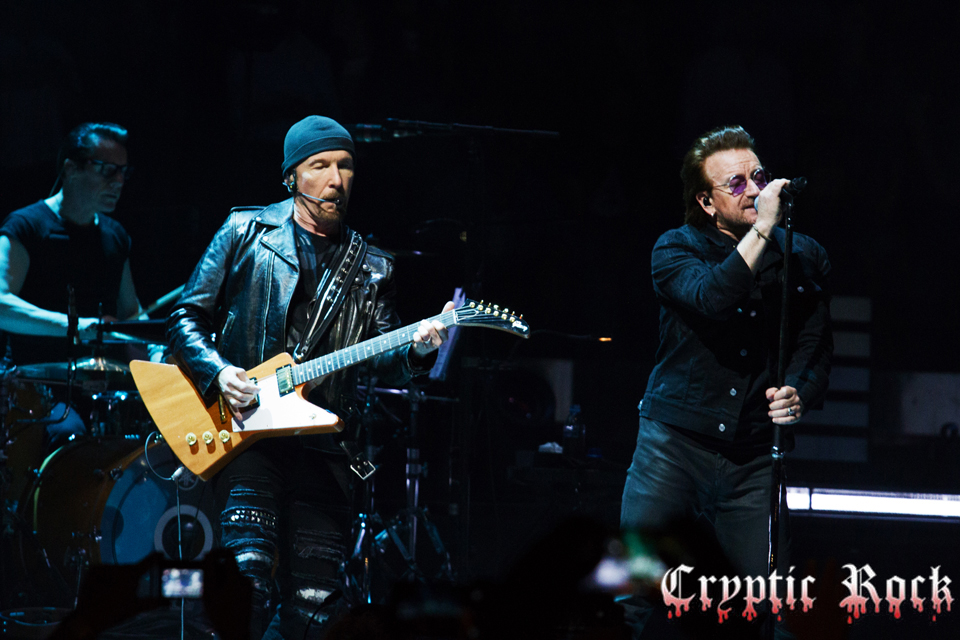 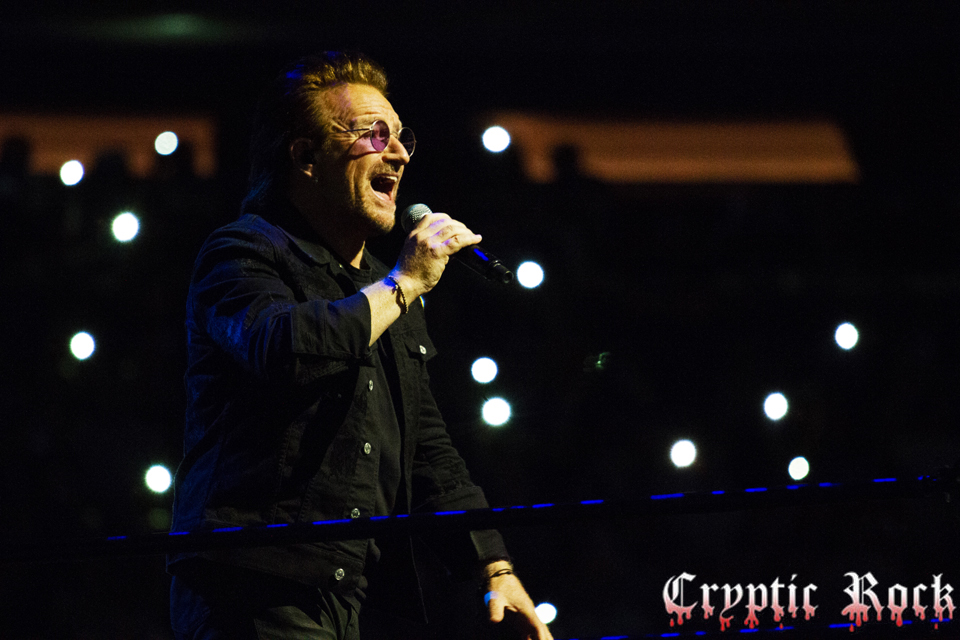 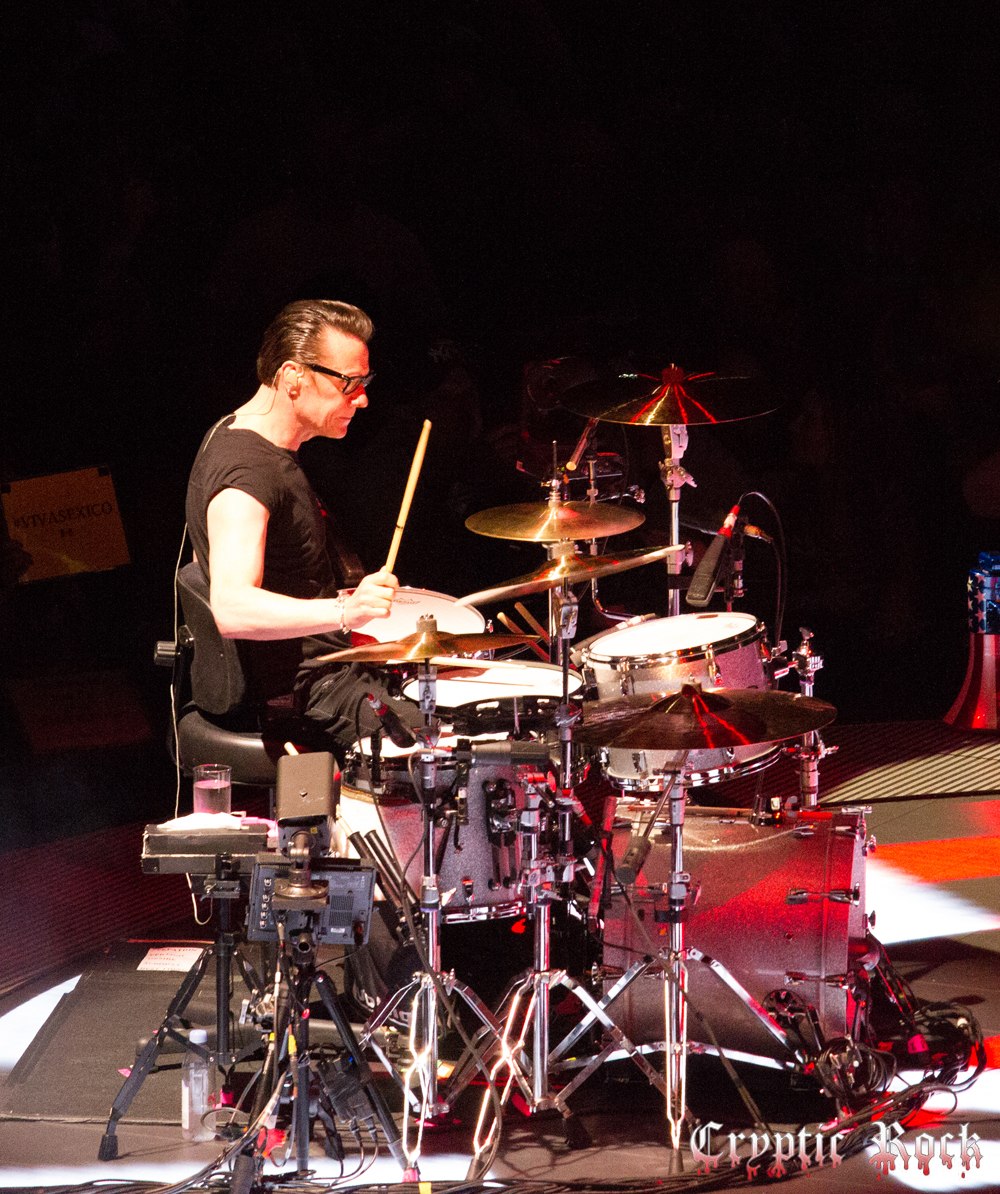 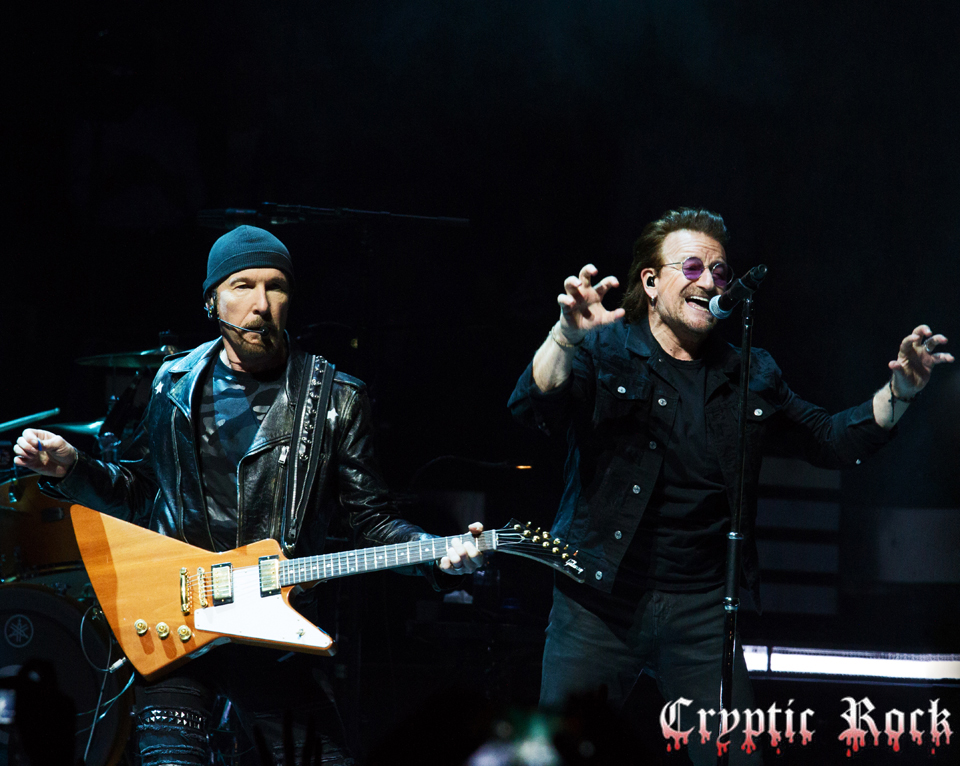 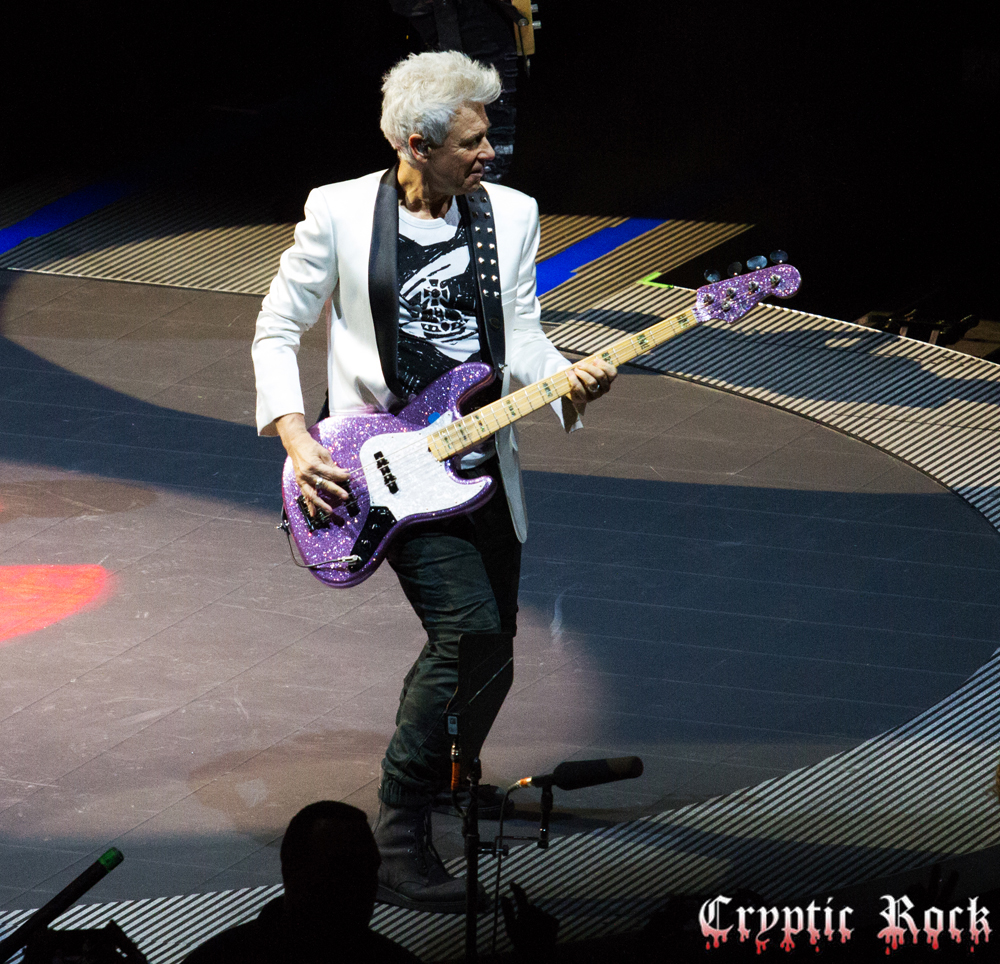 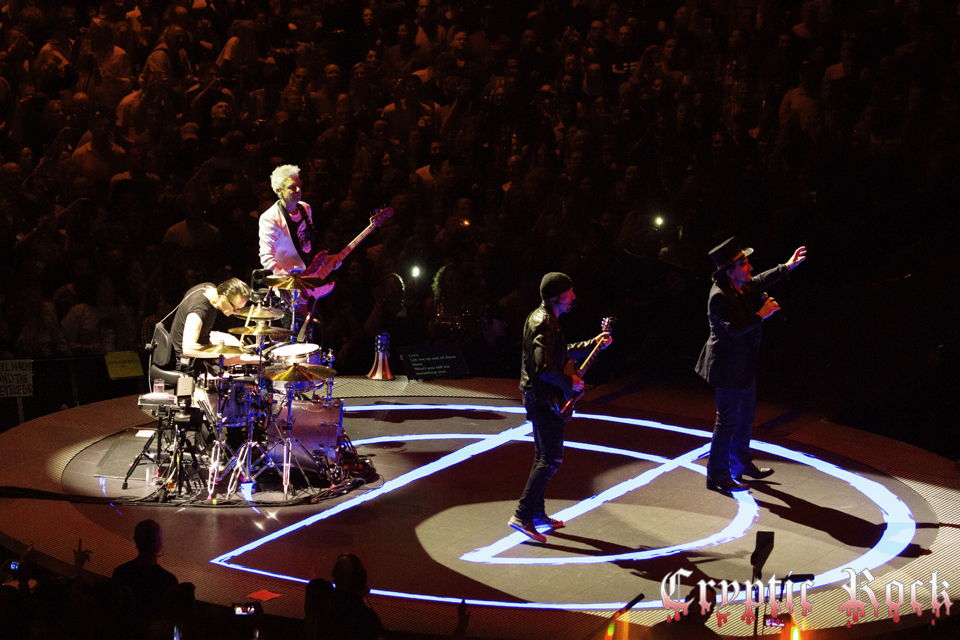 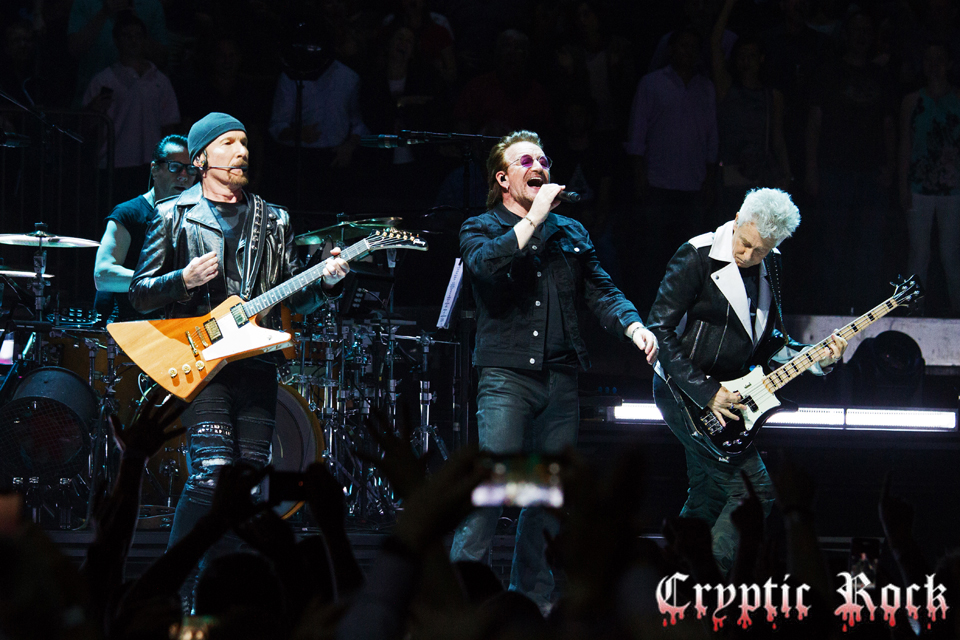