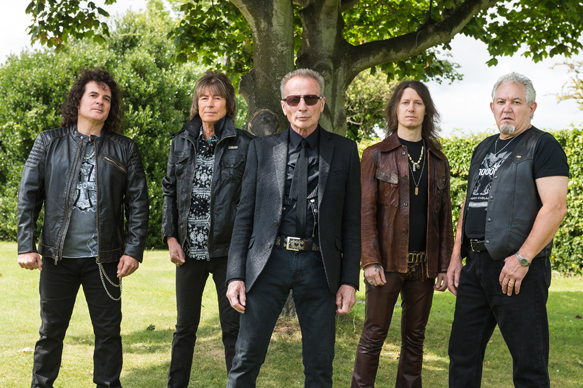 Ranked No. 84 on VH1’s “100 Greatest Artists of Hard Rock,” England’s UFO is a band that has made an undeniable mark on Rock history. Releasing their self-titled debut album in 1970, they mixed a fiery blend of Blues, Hard Rock, Proto-metal, Psychedelic Rock, and Progressive Rock. At the time, the band featured Phil Mogg (vocals), Mick Bolton (guitar), Pete Way (bass), and Andy Parker (drums).  For 1974’s Phenomenon, Bolton was replaced by teen prodigy Michael Schenker on guitar. At the age of seventeen, Schenker had played lead guitar for the Scorpions on their 1972 debut Lonesome Crow, and also played/wrote on their 1974 release Fly to the Rainbow before joining UFO full time. With the addition of Schenker, the band changed their style to a more straightforward Hard Rock sound. The band would release five studio albums and the seminal double live album, 1979’s Strangers In the Night, is regarded as one of the golden era of live albums right alongside Kiss Alive! (1975), Frampton Comes Alive! (1976), and Cheap Trick’s Cheap Trick at Budokan (1978).

After Schenker’s departure in 1979, the band continued to release quality albums with original member Mogg and Parker present for the duration. Now, forty-five years after their self-titled debut, UFO has delivered one of their strongest efforts in years with their twenty-first studio album,  A Conspiracy of Stars, released February 23, 2015. Now Rock legends, the lineup for A Conspiracy of Stars features Mogg, Parker, Paul Raymond (keys), Rob DeLuca (bass), and Vinnie Moore (guitar). DeLuca is filling in for founding bassist Pete Way, who is currently battling prostate cancer, while Raymond has been with the band on and off since 1976, and 2015 finds Moore in his twelfth consecutive year with UFO.

“The Killing Kind” opens UFO’s latest effort with plodding power chords from Moore that grabs the listener by the throat and pushes them along with Parker’s crushing beats on the drums. Moore lays down a piercing solo, featuring breakneck fret work that comes across with the perfect amount of reserve as the spaces between the notes are as impactful as the sound. “Run Boy Run” finds Moore screaming over the melody throughout the song as he strings together mini solos on top of the lead from start to finish. Mogg’s vocals are up front in the mix, and they provide the perfect balance to Moore’s frenetic guitar licks. “Ballad of the Left Hand Gun” has UFO branching out into unfamiliar territory as they deliver a track dripping with country inflections, including a swampy intro featuring a swinging acoustic guitar with electric slide accents. The record continues in this vein with Mogg providing powerful vocals along with some excellent harmonies, while the middle portion has UFO hopping back into their comfort zone as Parker drums furiously and Moore goes wild. The final third reprises the country flavor of the opening section as the down home acoustic guitar runs out the track.

“Sugar Cane” opens with prog-drenched keys before giving way to a slinky Blues riff. The song then evolves into a complex mix of medium paced Blues and pure Heavy Metal guitars and drums before retreating back into an extended Prog/Psych outro. Here UFO harkens back to their early pre-Schenker days and does so with ease as they turn the clock back forty-five years to the days of their heavy Psych jams.  Precious Cargo” is an escalating offering that opens with a funk-based, pounding bass line sprinkled with snappy leads on keys and guitar at a medium pace as Mogg’s vocals come off menacingly. The first break features Moore playing jazzy, reverb heavy solos. The song then takes off in rousing fashion before an extended solo from Moore over heavy organ from Raymond. Moore closes out the song with a delicate, meandering solo.

“The Real Deal” echoes the best of the Schenker era with a classic Hard Rock riff, simple, pounding drums, and lyrical bravado as Mogg confidently sings, “No more sleeping, ’cause this is the real deal, yes it is.”  Moore pounds out power chords and dancing solos throughout the track. It is Hard Rock personified. “Messiah of Love” continues with a bluesy melody and growling vocals. Moore’s tone will remind the listener of prime Leslie West and Paul Kossoff of Mountain and Free respectively. The song takes a left turn into an R&B break before exploding into a heavy slab of gritty Rock. Album closer “Rollin’ Rollin’” has a distorted, loopy bass line playing the lead with Moore strumming simple, powerful chords and Mogg growling to the beat. Showing their versatility, UFO then turns the song into a full on Grunge raver, channeling the best of the early ’90s Seattle scene with thrashing drums and frenzied guitars before drowning out in a low-key, bass heavy outro.

Any band that has been recording and touring steadily for forty-five years is going to undoubtedly endure lineup changes and embrace various styles, and UFO is no exception. Having run the gauntlet from electric Blues to experimental Prog-Rock to Proto-Metal to driving Hard Rock, their latest effort finds them comfortably churning out a tight, hard driving Rock-n-Roll album. Moore expertly lays down several styles on guitar, while Parker, Raymond, and DeLuca hold down the fort with precision, allowing Mogg to shine like the seasoned front man that he is in this well-crafted collection of rockers. While Schenker was back with the band for a reunion stint prior to leaving, it was an understatement in the eyes of fans that anyone who replaced him had big shoes to fill. With that said, Moore, a strong guitarist in his own right, delivers his best performance to date on A Conspiracy of Stars. For music lovers looking for an upbeat, punchy, professional slice of Rock-n-Roll, A Conspiracy of Stars delivers. CrypticRock gives this album 4 out of 5 stars. 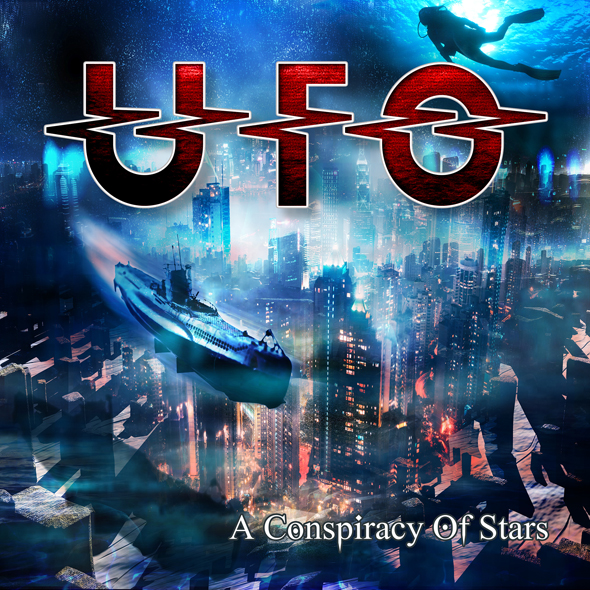