Ume’s ‘Monuments’ Streaming In Full A Week Prior To Release Via Fender.Com; Band Announces U.S. Tour

Monuments, the new album by Austin trio Ume is available to stream in full a week prior to its release beginning today via Fender.Com. The album is the follow up to the group’s heralded debuted full-length album Phantoms and will be released by Dangerbird Records on March 5th. To pre-order the album now on iTunes, click HERE. Monuments was recorded in Seattle, WA at Robert Lang Studios and produced by Grammy® Award winning producer Adam Kasper (Queens of the Stone Age, Nirvana, Foo Fighters, Cat Power).

This week Ume announced a run of live dates in support of the new release that will kick off with an in-store performance at Waterloo Records in their hometown of Austin, TX and various soon to be announced performances at South By Southwest. See below for a complete list of dates. For more information and to purchase tickets, click HERE.

Hailing from Austin, Texas, Ume is Lauren Larson (Vocals, Guitar), Eric Larson (Bass), and Rachel Fuhrer (Drums) and rarely is the platform for women in rock updated as authoritatively as its been done with this band. The trio’s music is one of beautiful juxtapositions: the loud and soft, the aggressive and eerie, buoyant melodies bursting through wall-of-noise dissonance. Ume explores the artier, heavier side of indie rock, post-punk, and alternative rock and have already garnered the attention of Nylon, who declared, “This band is ready to break out in a whole new way… A little like fuzzy shoegaze, raw garage rock and irresistible pop all rolled into one fiery package,” while Village Voice proclaimed “Ume immediately won me over with their raucous bursts of guitar-driven art rock, with front woman Lauren Larson threatening to take the whole thing off the rails with the abuse of her guitar strings. Still, underneath this Ume possesses an air of intelligence and depth rare in a genre known primarily for its copious drug use. When it comes to art, psychedelia, and rock and roll, it doesn’t get much better.

Ume has conquered audiences across the country as a result of their momentous live show and toured over 150 dates in support of their prior release. They’ve supported …And You Will Know Us By The Trail Of Dead, Warpaint, The Smashing Pumpkins, Franz Ferdinand, Helmet, and Cursive, and were personally invited to open for Jane’s Addiction at a Lollapalooza afterparty by Perry Ferrell last year. The band also appeared on the 2012 Season Premiere of Anthony Bourdain’s No Reservations, sharing their insight on local Austin food during Bourdain’s visit to SXSW.

Stay tuned for details on Ume’s appearances at South By Southwest. 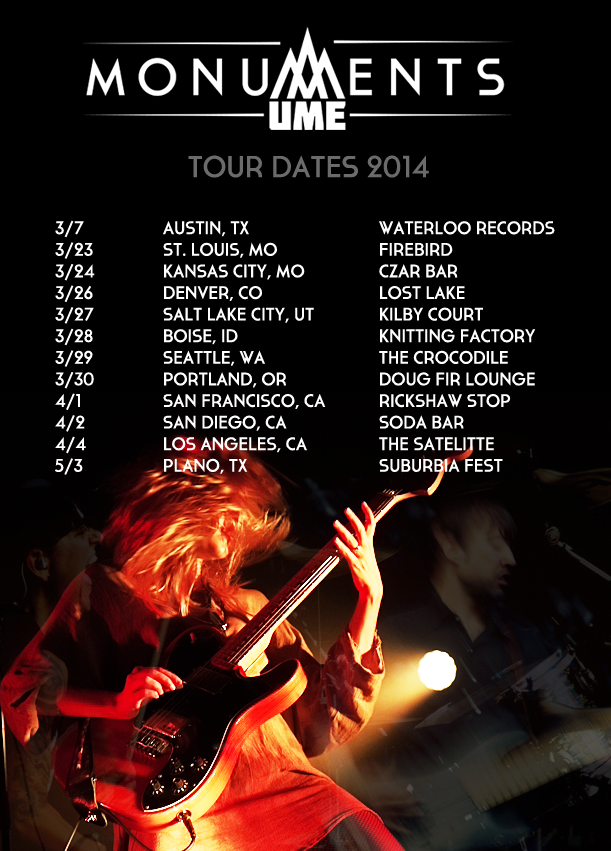