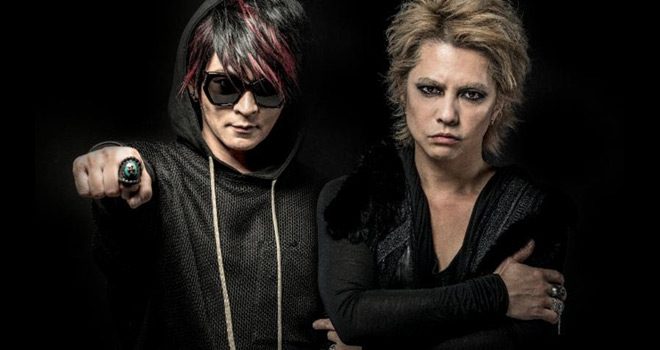 When a vampire tells you to “BYOB,” they means bring your own blood! Hard rocking Japanese VAMPS know this all too well and they sing about this fact on their newest musical effort, Underworld, which arrived on April 28, 2017 via Eleven Seven Music.

Vamps (who stylize their name in all caps, as VAMPS) are a Hard Rock duo hailing from Japan. The pair – Hyde (vocalist and rhythm guitarist) and K.A.Z (lead guitarist and backing vocalist) – formed in 2008 and share songwriting duties, though Hyde handles lyrical content. Within a year of forming, the duo had released their debut, self-titled album, as well as performed on their first overseas tour here in the U.S. They also managed to sneak two dates of the 2009 Vans Warped Tour into their busy tour schedule.

Sophomore effort Beast followed quickly in 2010, along with their first world tour that included shows in such diverse locales as Taiwan, France, Chile, and the U.S. The album made a Top 5 entry on the South American charts, a first for a Japanese artist to achieve such a feat. Following their successes with more touring and another album, 2014’s BloodSuckers, the twosome would perform at the Japanese MTV Video Music Awards Japan, as well as take home the award for Best Rock Artist. Of course, VAMPS did not pause in their relentless tour schedule, which has brought them to share stages with the likes of Sixx:A.M., Apocalyptica, In This Moment, Buckcherry, Nothing More, and Gerard Way.

Produced by the Grammy Award-winning Howard Benson and Kane Churko, VAMPS’ fourth studio album, Underworld, features eleven tracks of Hard Rock with Goth, Glam, Industrial, and Metal influences, which is a solid representation of these rocking Japanese vampires. Beginning with its title-track, a synth-heavy, Industrial/Goth Rock offering, Hyde sings with absolutely no trace of an accent whatsoever; he could be a disaffected youth from Scranton, PA or Ocala, FL. It blends flawlessly into the group’s current single, “Calling,” a Groove-heavy, hard rocker with some delicious ’80s influences.

Moving on, while “Break Free” – which features Kamikaze Boy of Man With A Mission – is generic Rock, VAMPS show promise on the emotional plea of “Don’t Hold Back.” In fact, VAMPS play mostly standard Hard Rock with Metal, Goth, and Glam influences. They could be just another recycled American Metalcore outfit, but they are not: these boys are Japanese vampires through and through.

All this said, at times, VAMPS sound a bit Marilyn Manson-esque on “Bleed for Me,” which is a macabre, vampiric exploration of gritty, bass-heavy Rock and one of the album’s most promising tracks. After the power ballad “In This Hell,” Underworld begins an upswing which is a bit late in the game, as listeners are now more than halfway through the album. Despite this, “Inside of Me” is the clear, standout single from Underworld, featuring Chris Motionless of Motionless In White. Hyde’s vocals soar as he sings of the monster inside himself, inside of all of us. This song was meant to be a single and it is no surprise whatsoever that it has since become the band’s biggest streaming success to date, and was featured on several of the major curated Apple Music and Spotify Rock playlists. The song also received U.S. radio airplay on SiriusXM Octane and won the weekly Octane Twitter poll by a landslide.

Anthemic “Rise or Die” – which features Richard Z. Kruspe of Emigrate/Rammstein fame and is the B-side to the “Inside of Me” single – is the melodic Hard Rock cry of the enslaved and their Japanese vampire friends, wanting to rise up. It is another standout, though it lacks a certain sense of urgency; clearly VAMPS are just not particularly angry dudes. Meanwhile, the seductively sensual “Sin In Justice” presents such a fat musical sound that it overshadows Hyde and his lyrics; this is likely thanks to the superb sounds of Apocalyptica, who guest on the track. In short, the music is stellar, but the lyrics fall short. Industrial Dance groover “B.Y.O.B (Bring Your Own Blood)” illustrates that these Japanese vampires have some serious sass. Here, they are reminiscent of Dope and they spin you right round with a stellar vampiric, after hours dance party. Lastly, the album wraps up nicely with the catchy, upbeat melodic Hard Rock of “Rise Up.”

Overall, Underworld maintains a fairly steady pace, lacking in extreme highs or lows; instead, it is solid and catchy. VAMPS’ compositions and arrangements are solid Rock-n-Roll music, but ultimately there is nothing new happening on Underworld. The key for the future of VAMPS will be seeing if the pair can push themselves further, faster, to attempt something truly spell-binding that will make them memorable standouts in a sea of similar groups, at least in the USA. They have the foundation and its a great one, so the future seems very promising for these talented rockers. For these reasons, CrypticRock gives VAMPS’ Underworld 3.5 of 5 stars. 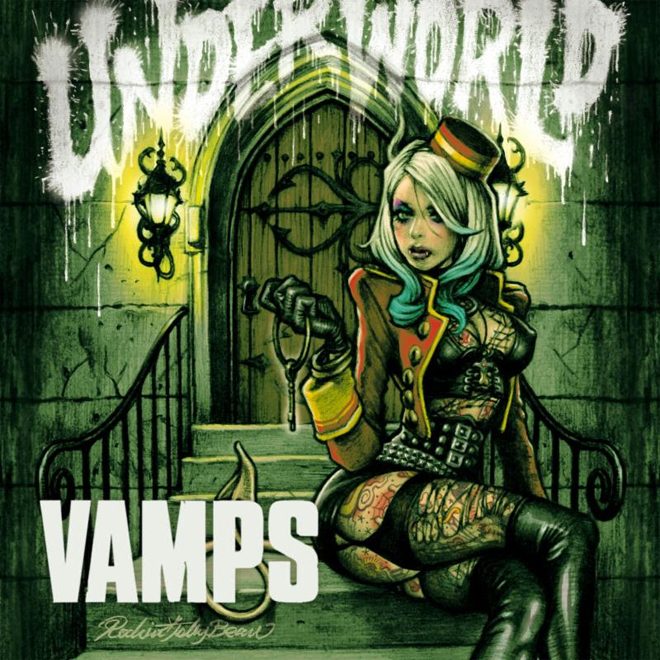 VAMPS will be hitting the road here in the U.S. with I Prevail, Starset, Of Lions, and Cover Your Tracks for the Lifelines Tour. Please visit VAMPS official website, VampsXXX.com, for further tour details.

AFI – Bodies (Album Review) Chevelle – NIRATIAS (Album Review)
Like the in-depth, diverse coverage of Cryptic Rock? Help us in support to keep the magazine going strong for years to come with a small donation.