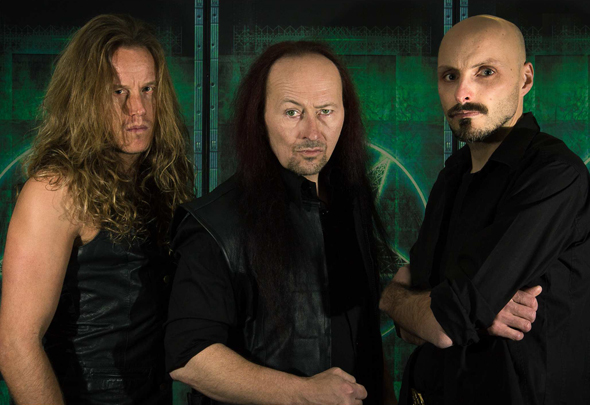 Coming out of England at the height of the New Wave of Heavy Metal movement, Newcastle’s Venom were pioneers of the Black Metal/Thrash Metal sound. While bands like Judas Priest and Iron Maiden were playing hard riffs with wailing vocals and pounding bass and drums, Venom took it to the next level. Besides playing at breakneck speed, Venom released albums with titles like 1981’s Welcome To Hell and 1982’s Black Metal, which is regarded as one of the best Thrash Metal albums of all time.  Now over three decades since their formation, Venom return with their fourteenth studio album titled From The Very Depths.  Lead by original member Conrad “Cronos” Lant on bass/vocals, 2015’s Venom features Stuart “La Rage” Dixon on guitar and Danny “Dante” Needham on drums as the band continue their tradition of adopting stage names related to the occult, although the band confesses they are not Satanists, and it is strictly in the name of showmanship. Lant is the only original member.

“Eruptus” kicks off the album with swirling effects for just over a minute and then it takes the listener right into the title song. This brutal Thrash track has a relentless riff and features solos not only at the expected times, but also during the verses. It is a perfect piece for this genre; singing about hell, fast-paced, heavy bass and drums, and guitars galore. “The Death of Rock and Roll” follows in the same vein with frenetic drums throughout, speedy guitars, and here, the band pounds their chest as they sing, “Light up the Marshall Stacks/We’re killing Kid Creole/With devastating thrash/The death of rock and roll”, as they announce Thrash’s dominance over the old standard of Rock.  Next, “Smoke” opens with a lighter riff that would not seem out of place on an early Alice in Chains or Soundgarden record. It plods along at a medium pace as Lant also takes the vocal delivery down a notch or two. Venom steps away from the immediacy of Thrash here, and they do it well as they craft a song as good as anything from the 1990s Hard Rock/Heavy Metal/Grunge scene.

Following is “Temptation,” which finds Venom back to form on a speedy dirge with Lant spewing gritty vocals over thick guitars. “Long Haired Punks” finds Venom perfectly mixing an elongated riff with an incredibly fast one and rapid fire drums. Throughout the song, the band transitions between the two with ease. The back and forth is punctuated with an intricate guitar solo.  Thereafter, “Stigmata Satanas” is another track echoing vintage Venom, taking the listener along hurriedly with wailing guitars and dark lyrics. On “Evil Law” a creepy sound effect and simple drum beat lead into a spaced out, crushing riff, with the effects still swirling in the background. Here, Lant delivers his most evil sounding performance, giving off the vibe of a man possessed. One cannot help picturing a black altar, a pentagram, goat’s blood, and candles as the song pushes along with even more effects and menacing guitars. This track is Black Metal perfection.

“Grinding Teeth” brings Needham’s drumming to the fore as he opens the track out front with quick snare riff and never lets up throughout. This is a nice change of pace for the band, as while there is still plenty of guitars, Needham gets to show his stuff from start to finish. Changing things up again, “Overture” is a one minute plus piece of light guitar and drum jaunt that seems out of place, but it is a unique piece and the perfect setup for “Mephistopheles,” which is a ripping Thrash tune replete with the “best of” thrash: fast riffing, multiple solos, screaming vocals, and break beats. If there was one song on this offering to show what Venom pioneered, this is it.

From The Very Depths finds Venom showcasing the thrash sound that made them popular among Metal fans looking for something new over thirty years ago, but they also show some chops here, along with the ability to carry a nice groove as not every song is a race to the finish.  It is a Thrash Metal masterpiece featuring dense, breakneck riffs, rough vocals, blistering solos, and pounding drums. With other songs such as  “Stigmata Satanas”, “Crucified,” “Wings of Valkyrie,” and album clover “Rise,” Venom let the demonic theme thrive, with Lant playing the part of an occult preacher to perfection with his rough, rapid delivery.  CrypticRock gives From The Very Depths 4 out of 5 stars. 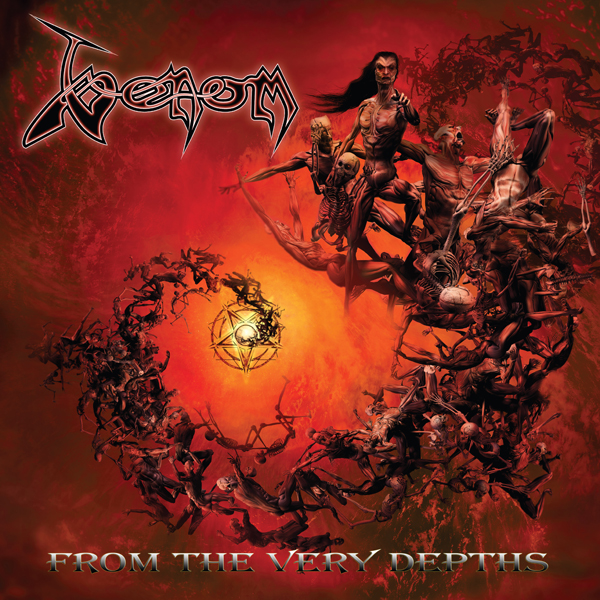