The Italy Rock scene is perhaps one of the most unique in the European region. With a interesting mix of original artists ranging from classic soundtrack Rock band Goblin to Gothic Rock tingling Lacuna Coil, there is a certain romantic quality to Italy’s scene. With that said, there is also a talented gentleman going by the name Victor Love out of Rome who has built his own scene over the past decade plus. Known as the founding of Industrial styled band Dope Stars Inc., Love has helped create a new sound that mixes Industrial, Rock, Techno, EBM, and Punk. Releasing five studio records since 2003 with Dope Stars Inc., Love has always kept his creative impulses open, and when an artist does that, the possibilities are endless.

That in mind, in 2016, Love took the Rock underworld by storm with his debut EP, The Network; four tracks of sonic aggression with distortions, authentic leads, headed by melodic synths. Love’s “Do It Yourself” attitude afforded him to mold his sound with his instruments, his vocals, his mixing, creating a foreplay EP to tickle and taunt the ears to want more. Then, the hard-working Love promised more, and now he delivers with his long-awaited debut, full-length album, Technomancy. Released on May 6th, Technomancy is ten tracks of, what Love coins, Neo-Cyberpunk.  Produced by himself, Technomancy features collaborations from groups like KMFDM, Spiritual Front, Deflore, Deathstars, Army of the Universe, Aborym, Zu, The Enigma TGN, Hate Inc., and ORAX.

Looking at the anime-esque cover art, Technomancy has shades of Daft Punk, but with an electric flare on the back of a futuristic being looking back over his right shoulder. Inside his right hand, the character looks like he is holding an Allspark-like object from the Transformer franchise as he stands in front of, presumably a futuristic Italian cityscape.

Diving into the album, “Bitchcraft,” featuring the group KMFDM, was the first single released from Love to whet fans’ appetites. This opening track comes on strong with a bass synth beat as the guitars grind in, and the drums fill in this piece that seems to be singing about gold diggers. Next, “Irrationality,” which features Spiritual Front, has a strong bass drum/synth intro as the vocals come in as the beat takes a backseat. Then, the guitars accompany the chorus in this song that cuts through the bull to show how people rationalize their actions with irrational explanations.

“Cocaine” has a schizophrenic lyric delivery by Deflore. This beat is frenetic with some pounding bass and grinding guitars accompanied with hypnotic synths. Moving on to “Surrenders,” Deathstars slows the tempo down in this Gothic-flavored piece with heavy, rich deep synths and drums. Then, the guitars come with the deep riff, cutting through the melody in this message of not making concessions for your beliefs and wants.

Like a “Machine Gun,” Army of the Universe comes in fast and furious with their synth-accompanied sonic rap and synthed ethereal backing vocal as the drums beat militaristically, demanding the respect the song sings about. Instantly, “The New System” comes in like a juggernaut with Aborym at the helm. Drums and guitars come double time as the band comes screaming with a delivery to match the musical tempo. The double time is not even broken by the synth solo. It gets amped with the accompaniment in the last act to the finish.

“I Curse You,” featuring Zu, has a brooding beat of deep synths that get joined by grinding guitars for the chorus before settling down for the next act. This piece seems to be talking about someone being curse because of knowing someone, not after a relationship like most songs. The last act brings in some brass that have an “I told you so” sadness. Keeping the brooding vibe, “Blind or Dead,” featuring The Enigma TNG, has a slower tempo that has a harder edge with the grinding riffs of the guitars and the ominous synth riff through. Then, the synths break into underlying melody that cuts the ominous with a beauty through the chorus, even as “Blind or dead/I want the world to end” is sung.

“Can’t You Remember,” which features Hate Inc., has a lightness to the flavor of track juxtaposed to the darkness of the lyrics of trying to recapture a life lost by either time or trauma. At just over the three and a half minute mark, the song plays like a memory. Closing Technomancy is the instrumental “Black Dream.” ORAX and Love come in with the Dance bass and underlying ethereal synths like walking through darkened corridors as well as synths riffing with the Dance bass. The last has a bit of extended higher-pitched riff like an old school monster lurking in the shadows.

Victor Love promised, and brought it with Technomancy. Taking what he did with The Network EP and enhancing it, Love has crafted a sound and style that he can call his own that is sure to have home stereos blowing their speakers and clubs spinning his tracks in endless rotation.  CrypticRock gives Technomancy a 5 out of 5 stars. 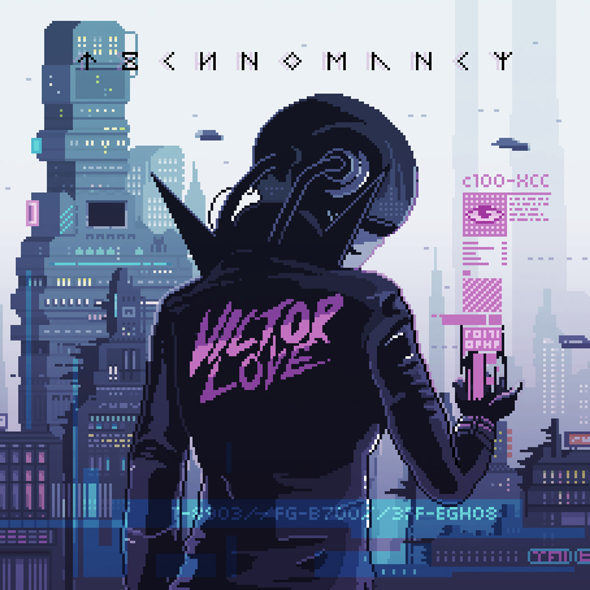