Videodrome – 35 Years Of The New Flesh…

When pornography is not enough, naturally, one turns to hardcore violence. When that is not enough, one seeks out Videodrome, starring James Woods (Cat’s Eye 1985, Vampires 1998), Blondie’s own Debbie Harry (Hairspray 1988, Tales From the Darkside 1990), Leslie Carlson (The Dead Zone 1983, The Fly 1986), Peter Dvorsky (The Dead Zone 1983, Twins 1988), and Jack Creley (Dr. Strangelove Or: How I Learned to Stop Worrying and Love the Bomb 1964, Police Academy 3: Back in Training 1986). Written and directed by David Cronenberg (Shivers 1975, The Brood 1979), released in US theaters on Friday, February 4th in 1983, Videodrome was made on an estimated budget of just under 6 million dollars, yet reportedly grossed just over 2 million dollars in The States, thereby making it a flop, but not all flops are by any means bad films. 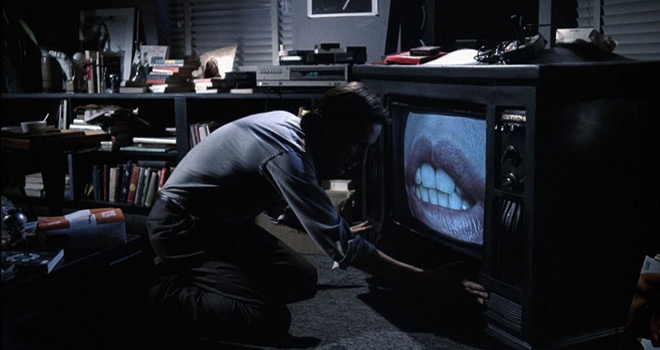 So where did the idea for this warped little film come from? Well, when Cronenberg was a child in Canada, his television would pick up channels from Buffalo, New York well after the Canadian stations went off the air. He would get scared that he would see something that was not supposed to be seen by the public; this was the birth of the idea for Videodrome.

In the end of the 1970s, and beginning of the early 1980s, cable television was brand new. Before you had three, maybe four channels, but now there was a plethora to choose from. All sorts of small cable channels sprung up trying to deliver the best content to viewers. In the story of Videodrome, Max Renn (Woods) is one of three controlling partners at Civic-TV channel 83 trying to be the best in a crowded marketplace. He shows anything from softcore pornography to overly violent films. He does not care what he shows as long as he gets the ratings.

One of his engineers, Harlan (Dvorsky), intercepts 59 seconds of a show called “Videodrome,” which consists of two men in black robes torturing a woman wearing only a shirt in a red room. Max watches it and is, at first, horrified, but when another longer episode is intercepted, Max is in love with the simplicity of it all. However, when he starts hallucinating torture and violence, particularly against his newfound lover, Nicki (Harry), he knows something is terribly wrong.

James Woods’ Max Renn is for all intents and purposes a scumbag. He deals in smut and violence and lives in a filthy apartment where he eats already half-eaten pizza off of dirty dishes. He is an unsavory character, but by no means not beyond redemption. When he is exposed to “Videodrome”, he is shocked and horrified, but then he starts rationalizing the extreme violence from a business perspective: “Brilliant. It’s absolutely brilliant. There is almost no production costs… you can’t take your eyes off of it…” Even when Masha (Lynne Gorman: Nobody Waved Good-bye 1964, The Case for Barbara Parsons 1980) tells Max that “What you see on that show, it’s for real. It’s not acting. It’s snuff TV.” Max is disbelieving and unfazed, and in true capitalist fashion: if he can make money off of it, he will.

Nicki Brand (Harry) is very enigmatic. She is an exceptionally attractive woman that is constantly searching for her next sexual thrill with reckless abandon. She debates Max on a cable TV show, and soon after they develop a “relationship.” She feels that she was made for “Videodrome” then becomes the one constant in Max’s hallucinations, guiding him towards the evolution to the New Flesh. 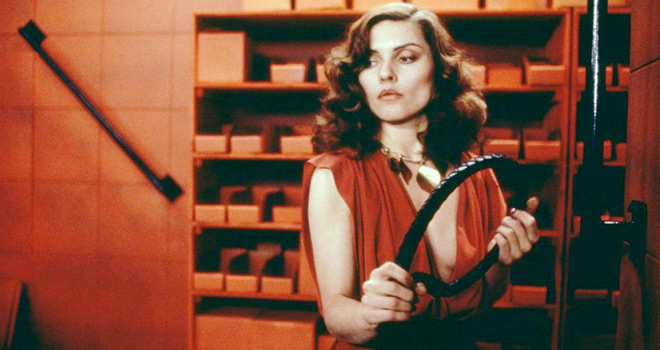 Videodrome is not so much the name of the red-room television show, but an underlying signal broadcast from the show itself. The film is a semi-metaphor for addiction and subliminal advertising. The additional aspect played out as the more television that is available, the more people are going to watch it. This is no more evident than in the Cathode Ray Mission, where Bianca O’Blivion (Sonja Smits: The Pit 1981, American Gods series 2017) brings in the homeless and sits them in front of televisions rather than feed them. She does serve food, but this is not the main purpose of the show.

Barry Convex (Carlson), who was modeled after Televangelist and conman Jim Bakker, perfectly illustrates the subliminal message aspect as not only does the Videodrome signal cause your mind to expand, but also makes you susceptible to mind control. Meaning, had his plot succeeded, the more people that watched “Videodrome,” or whatever they decided to attach the signal to, would all be capable of being under his control, making him the most dangerous man in North America, and possibly the world. “I have a feeling it’s going to be very popular.” – Barry Convex

One would be hard-pressed to make a film like Videodrome without stellar special FX, but not just any special FX artist would do. The legendary Rick Baker (An American Werewolf in London 1981, The Frighteners 1996) and his crew were brought in to bring this bizarre masterpiece to life. Aside from minor things like cigarette burns and cuts, Baker was tasked with creating the living television, which is the mascot Videodrome. They were tasked with bringing the television to life, not just moving dials on its own, but organic, physical life.

In order to make the inanimate object live, special things had to be made. The most special item, however was a synthesizer. Usually, FX crews will puppet things themselves, like when the tumors burst forth from Barry Convex, but with all the motion that was needed in such a small space like a television, new methods had to be created. One of the crew found an old synthesizer, took it apart and connected various pneumatic devices to the keys so that each time a key was pressed, a burst of air would flow through the tube. For the big sequence where Max is consumed by the television, the crew brought in someone that actually knows how to play piano, and that person played ‘Fugue In D- Minor’ to make the television pulsate. Even to this day, it is truly a special effect. 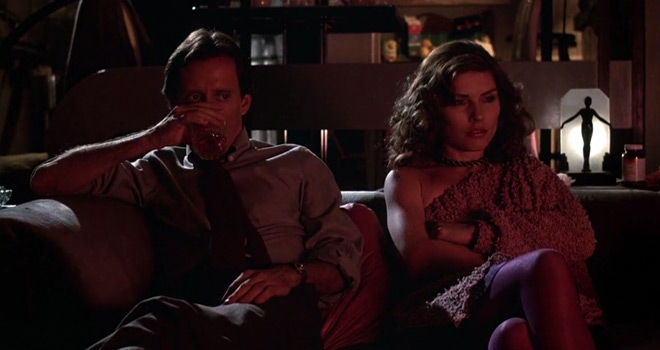 There were other effects made for scenes that were either discarded or never made. Among them was one where Max Renn’s TV rises up out of his bathtub, while showing an image. The crew had researched how to do this – there had been talk of having the actor IN the tub – and had come up with several solutions. One involved filling the tub with a clear fluid that was non conductive, but that would have cost $25 a quart. The crew eventually decided to take a real TV and simply cover its insides with layers of waterproofing insulation. It worked – they dunked the TV into a swimming pool and found, to their astonishment, that TVs float due to the ultra-high vacuum inside the picture tube. The scene was axed just before it was to be filmed.

The chest-slit sequences had James Woods built into a couch with the chest-slit apparatus glued onto him. Woods swore he would never work with anything that had to be glued onto him ever again! During filming the sequences with the flesh-gun (which “fired” bursts of cold, vaporous gas), Woods played a prank on Director David Cronenberg by smearing his (real) hand with blue paint and pretending he had frostbite.

Additionally, an FX heavy epilogue was also planned, but scrapped. This involved Max, Bianca O’Blivion and Nicki appearing on the set of Videodrome. Bianca and Nicki are shown to have chest slits (vaginas) of their own, from which emerge strange mutated sex organs – this concept was also used in one of Cronenberg’s earlier films such as 1977’s Rabid. The scene was scrapped along with many others due to cost overruns, bad timing (Debbie Harry had stomach flu and James Woods was visiting relatives), and the sheer difficulty of executing such a special-effects scene.

Interestingly enough, a novelization of Videodrome was released by Zebra Books alongside the movie in 1983. Though credited to “Jack Martin,” the novel was in fact the work of Horror novelist Dennis Etchison. Cronenberg reportedly invited Etchison up to Toronto, where they discussed and clarified the story, allowing the novel to remain as close as possible to the actions in the film. There are some differences however, such as the inclusion of the “bathtub sequence.” This was the result of the lead time required to write the book, which left Etchison working with an earlier draft of the script than was used in the film. 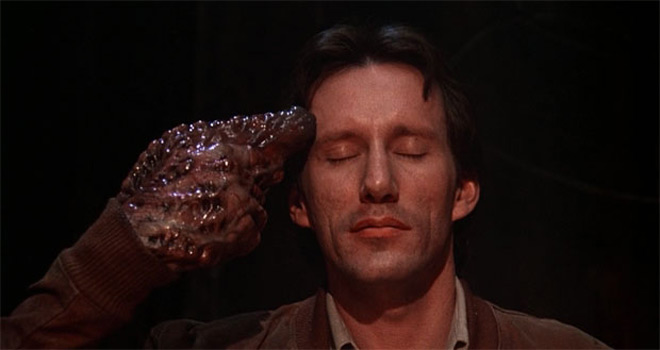 Despite its poor commercial performance, Videodrome won a number of awards upon its release. At the 1984 Brussels International Festival of Fantasy Film, it tied with Bloodbath at the House of Death for Best Science-Fiction Film, and Mark Irwin received a CSC Award for Best Cinematography in a Theatrical Feature. Videodrome was also nominated for eight Genie Awards, with David Cronenberg tying Bob Clark’s A Christmas Story for Best Achievement in Direction. In 2007, Videodrome scored fourth on Bravo TV’s “30 Even Scarier Movie Moments.” It was also selected as one of the 23 Weirdest Films of All Time by Total Film. Videodrome was named the 89th most essential film in history by the Toronto International Film Festival.

Like most films before and during the 1980s, the technology presented in them is antiquated. However, in this time of media oversaturation, the notion of hopeless addiction and weaponized media is simply terrifying. Just look at Fox News and CNN and other news outlets and the divisive political climate they have created. Sure, it is not a radioactive tumor-inducing signal from your television, but it surely has affected people in different ways.

Imagine now that Netflix and other services exist that let you watch an entire season of a brand new show all at once were to implant subliminal devices to control you. The addiction factor is already built in bingeing, but to actually weaponize that media and really grab the viewers seems like something that is not out of even the furthest reaches of possibility. In that aspect, Videodrome remains relevant and terrifying even after 35 years. 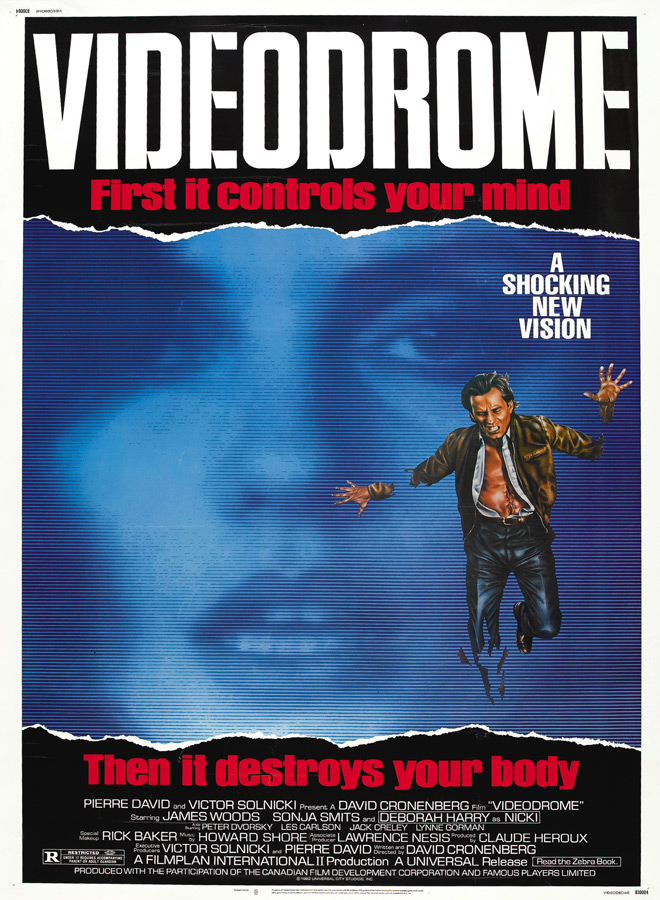