“Take your eyebrows, hang out, have a coke and a smile, people!” because this movie is pure comedic genius. Urban legends have always sparked curiosity amongst the masses; people wondering how they get started and are ultimately perpetuated. One sociology student makes it his mission to answer these questions as a part of his thesis, but takes it a step further when he enlists the help of some friends on Halloween night to see what urban legends they can come up with using the library as their stories’ setting; which they then intend to spread around campus.

Volumes of Blood is an incredibly fun, award-winning anthology film that encompasses a plethora of genres; Comedy, Horror, Mystery, Thriller, and even Drama. It initially premiered on March 13, 2015, but then established a much wider release in 2016 to DVD and various VOD platforms via Indie Rights, LeglessCorpse Films, and Self Destruct Films, in addition to being produced by Verite Cinema.

The film utilized a multitude of contributing writers and directors who were responsible for creating the inventive stories that made up the whole; which also included a wraparound that leaves viewers’ heads spinning, their hearts leaping, and their bellies aching from laughter. Writers included Todd Martin (Gone with the Sun 2010, Lucky 2014), Nathan Thomas Milliner (The Confession of Fred Krueger 2015, Nathan Thomas Milliner’s a Wish for the Dead 2016), and P.J. Starks (A Mind Beside Itself 2011, The Preylude 2015); while the directors consisted of Starks, Milliner, Jakob Bilinski (Obsolescence 2011, Three Tears on Bloodstained Flesh 2014), Lee Vervoort (Gun Town 2009, The Truck 2013), and John Kenneth Muir making his directing debut.

Aside from the capable writing and direction, the film also made use of an adequate cast whose ever so slight shortcomings actually aided in establishing that cheesy B-Horror impression. The movie stars a lengthy but delightful cast including Kristine Renee Farley (The Creepy Doll 2011, Bloody Hooker Bang Bang: A Love Story 2012) as Paige; Roni Jonah (Flying Saucer Sexodus 2010, The Zombie Movie 2014) as Kaelin; Jim O’Rear (Don’t Look in the Basement 2 2015, Nightblade 2016) as Lucem Ferre; Jason Crowe (Dead Moon Rising 2007, Harvest Lake 2016) as Tyler; David Roach (After School Special 2014, The Confession of Fred Krueger 2015) as Derek; Alexandria Hendrick (Bunni 2013, Fall of Grayskull 2015) as Lily; Todd Reynolds (Spirit Stalkers 2012, The Confession of Fred Krueger) as Travis; and Erik Huskinson (The Confession of Fred Krueger 2015, Volumes of Blood: Horror Stories) as The Bag Head Killer, in addition to many others that made their acting debuts.

Volumes of Blood opens with a blatantly melodramatic yet highly entertaining 80s Horror-inspired intro involving two “teenagers,” that were obviously far older than implied, sitting in a parked car at a secluded spot and undoubtedly getting ready to make some poor decisions; which any Horror fan knows usually results in tragedy. It is after this that the real story unfolds, when viewers are made aware that aside from the college setting and sharing of urban legends, there also lurks a masked serial killer that sets out in search of kills to satiate his Halloween bloodlust.

As is the case with most anthology films, some segments were enjoyed far more than others, but none of the stories in this film were either boring or lackluster. They also managed to comically touch on some very real struggles that most college students face today; endless study sessions, relationship troubles, and the stress and anxiety of completing assignments. This movie really had something for everyone, including a Halloween serial killer; a mysterious man offering mind-blowing energy drinks; a ghostly, haunted book that refuses to stay put away; a library monster on the prowl; and an “Encyclopedia Satanica” that is used to bring back a lost love from the dead.

The cinematography was fantastic and greatly achieved the desired intensity and scares that were always so perfectly timed. That, coupled with a well-developed film score and soundtrack that actually enhanced the storytelling, made for an overall pleasurable and exciting viewing experience that any movie lover could appreciate. The special effects were impressive and the gore was always just enough to give gore hounds their fix without being completely off-putting to other Horror fans that do not particularly enjoy it that much. It is also worth noting that most of the kills were very different and original, which is a difficult task in and of itself.

Because the movie was filled with so many self-referential moments, and successfully incorporated elements from varying Horror sub-genres with such ease and in a manner that was both equally comical and frightening, CrypticRock gives Volumes of Blood 3.5 out of 5 stars. 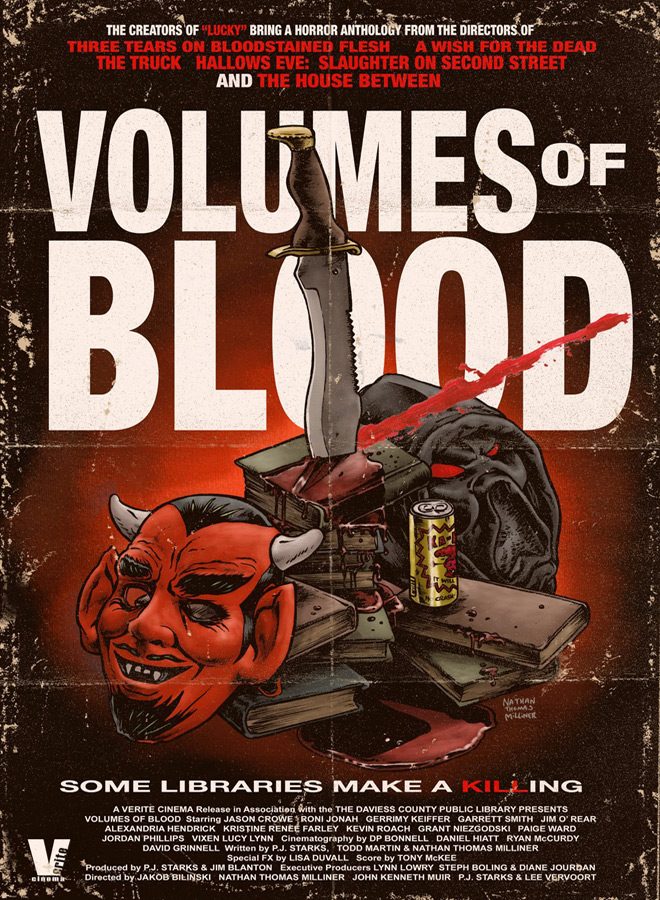