The battle to take down Negan continues on AMC’s The Walking Dead as different groups scatter to cripple his army when The Damned premiered on Sunday, October 29, 2017. Either taking Negan’s people hostage or taking them out completely, at the time, it seems the ‘good guys’ are winning. Although Rick’s strategy works to their advantage, the casualties of war is still a brutal reality. This proves even more true when Rick is forced to look himself in the mirror, and then encounters an old friend from his past, who is now on opposing sides. 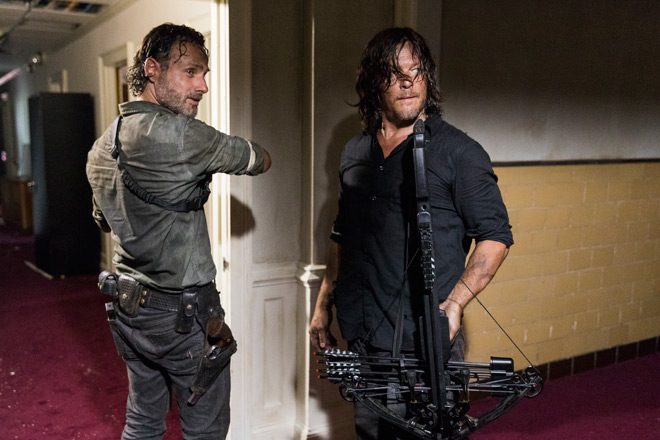 After the confrontation with Negan, the group immediately scatter towards their next missions, taking on various outposts and chiseling away at The Saviors. Using wit and the element of surprise, each group advances and gains ground over their enemy while Rick and Daryl look for their guns as per Dwight’s instructions. Their find is an unexpected surprise which could be a game changer to Rick’s plan.

Meanwhile, Tara and Jesus lead a team to the familiar outpost they conquered back in season’s six episode Not Tomorrow Yet. Here, most of The Saviors surrender with Jesus being the voice of reason on the matter of taking them hostage, much to Tara’s disapproval. In the midst of all the chaos, Morgan seems to slip into a recognizable state, his trauma bouncing back, which does help him take on the remaining Saviors inside, but what could this mean for Morgan as this plan moves forward for the group?

Staying positive and theatrical as usual, King Ezekiel moves his army through the woods to stop one Savior from alerting the rest of their attack. Carol calls him out on being unrealistic, but he still smiles and continues talk of failing not being an option.

This is all while Aaron and his team, using the armored cars, hold a group of Saviors back until some nearby walkers can get to them, which works well, but unfortunately lose a few more in the shootout, including injuries to Eric and Francine. Once Aaron discovers that Eric is injured, he takes him to the side, but the job is not quite done, and now that The Saviors caught wind of their actions, this could complicate the plan to defeat them.

At the end of The Damned, the audience receive a big surprise when a character not seen since Season 1 returned. Also catching Rick by surprise, once a friend, they are now on opposing sides, an inconvenient turn that could sabotage everything. It raises the question on whether or not Negan was somewhat prepared for Rick to make a move, being that the guns they are searching for are not in sight.

As far as the rest of the gang, Tara and Jesus disagreeing on how to handle their situation with those who surrender could put a damper on things also. Although Jesus means well, The Saviors have proven time and time again that they cannot be trusted, but that could change if Negan gets taken out. For now, they are forced to babysit, a plan that could go south very quickly, especially when seeing the sneak preview of Sunday, November 5th’s episode, Monsters. 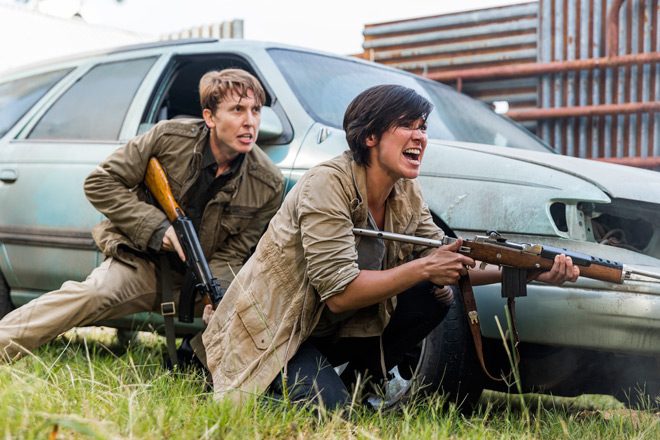 One light at the end of the tunnel is King Ezekiel, who remains positive in his theatrics, even during battle. Carol is clearly doubtful of his overconfidence, and he breaks character just a little only for her, an interesting change in tone not seen too often. He quickly expresses the point of boosting his people’s morale is important to win the day, as that will keep the motivation of winning alive, regardless of what kind of character he “plays.” Whether his antics are ridiculous or not, one cannot deny that his people believe in him, as he fights in the front lines with them, and can hold his own just as much as Rick and Maggie can.

As mentioned, another area of concern is Morgan, who seemed to slowly dive back in this traumatic state as his brief pause with the walkers surrounding him against the fence is a foreshadow before they stormed The Saviors outpost. As he is helpful in battle, a loose cannon can go off at the wrong time, and Jesus preaching words Morgan believed so much in may not be enough anymore.

A really war-driven episode, one of the most heartbreaking scenes The Damned delivered was Rick coming across a sleeping infant, quickly realizing he killed her father right outside the room, believing the guns were located there. This definitely affects Rick in a huge way, being a father himself. Ironically, in the same building, Daryl is reminded of his hatred for The Saviors, coming across a cell similar to the one he was locked in when he was held hostage. Across the way, Aaron and his group work together well, but their numbers soon start to drop. He and Eric constantly keep an eye on each other, and when Eric is seriously hurt, Aaron helps bring him to the side to a fate the audience has yet to see.

Needless to say, Rick’s plan was absolutely a strong start, but complications are taking place. For one, Father Gabriel is stuck with Negan; two, Jesus is altering the plan on dealing with some of the Saviors, many are already hurt or killed; and three, tragedy of war is taking full effect. Can the group stay ahead of The Saviors? Are they already heading into an unknown trap? It is way too early to tell, but it is possible Negan was right about Rick not knowing what is about to happen next. Until then, CrypticRock gives The Damned 4 out of 5 stars. 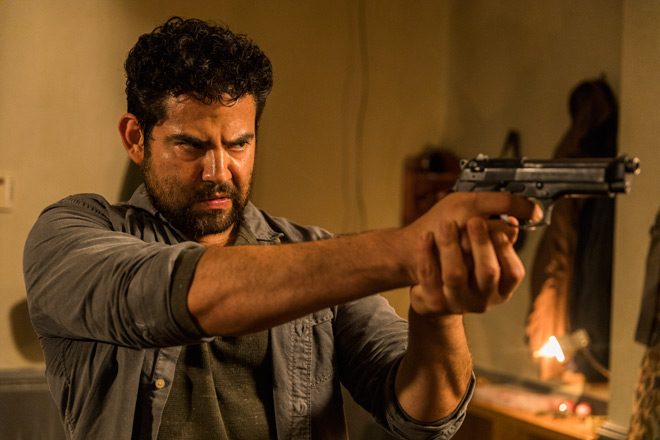