Having premiered on Sunday, November 12, 2017 on AMC, the latest episode of The Walking Dead challenged Ezekiel, still holding onto his theatrics, while pushing his people on to take down the Saviors. Curiously entitling the episode Some Guy, when this plan is crippled, Ezekiel returns home a different man; no one sure what it means for the danger that still lies ahead. Meanwhile, although much is lost, Rick and Daryl still pull off a much needed mission. 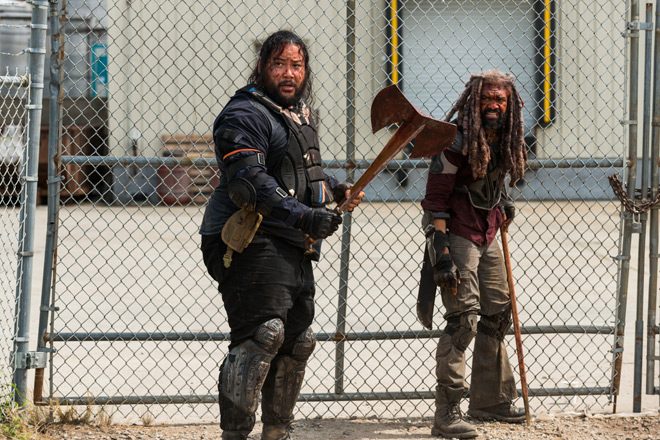 Jumping right into the cliffhanger from Monsters, viewers find out the immediate fate of King Ezekiel and the remaining Kingdomers; and his always smiling tone has quickly changed as he realizes more than half of his army has been slaughtered within a blink of an eye. He struggles to survive as they begin turning, and he eventually is taken hostage by a low rank Savior. He is luckily saved by Jerry, Carol, and Shiva, but with so much lost already, it will be hard to maintain the positivity he displayed previously.

With an opening scene that transitioned Ezekiel from then to now, it is a great foreshadowing of his morale; so uplifting to start and when everything is taken from him, he returns to his people a broken man. When the savior named Gunther – played by Whitmer Thomas and strangely resembling Jeffrey Dahmer – attempts to break him, they challenge each other in their situation. Ezekiel claiming that Negan does not know Gunther’s name, and the Savior accusing Ezekiel of being “some guy.” 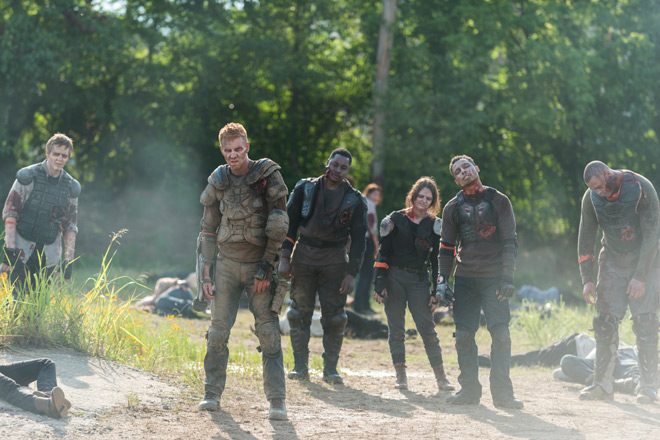 Thereafter, Ezekiel breaking down to Jerry was a powerful moment – revealing he was nothing but a fraud – a statement Jerry refused to hear. It raises the question on how he will lead his people, or if he will just shut down completely? Will Carol and Jerry possibly take over for the time being? Perhaps, but it is clear both of them still believe in Ezekiel, which is something but will take some time.

Although many are lost with Ezekiel’s team, including his beloved tiger Shiva, Daryl and Rick secure the very gun that took out the Kingdomer’s. Escaping Carol’s grasp, she hears the motorcycle, and quickly knows the Saviors will not make it very far. A brief car-chase, looking like something out of an ’80s action flick, was nonetheless exciting. That said, none can argue Carol taking out enemies on her own once again was a stand-up moment amongst fans; she took out the very murderers in the same fashion, holding onto the reputation of being the ultimate bad-ass. Working best when she is alone, this will hopefully play into helping King Ezekiel and will hopefully bring him to a peaceful moment after such critical times. 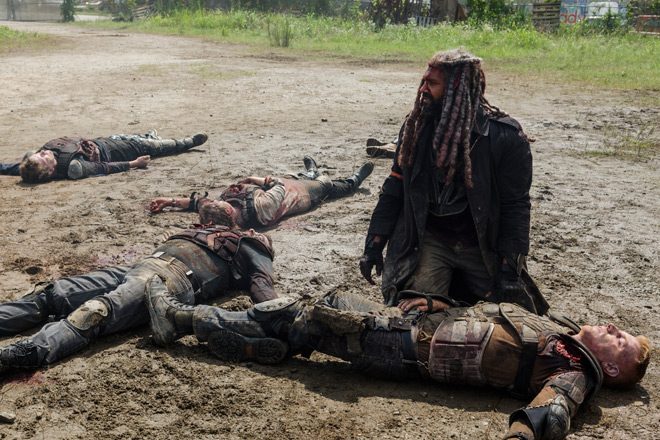 As for the lone Savior who captured Ezekiel, he certainly raised a few eyebrows with some fans. As mentioned, many calling him out to have a similar look to the late Jeffrey Dahmer. For those who read the comic, a potential Easter Egg is developed in the dialogue towards Ezekiel, a quick nod of a possible fate. This of course leads to Jerry saving him at the last moment, with the camera revealing Gunther’s insides like a curtain-call to the theatric Ezekiel – a possible show he no longer wants to put on after his traumatic event.

Escaping into the woods, a pit they have to cross is questionable but Ezekiel and company do it anyway. It is a toxic waste dump where the walkers have been trapped and certainly entertain this look from Greg Nicotero and his makeup team. Practical makeup effects which should be applauded, it is a possible nod to 1985’s Return of the Living Dead and Tar Man.

Finally, Negan is expected to return on Sunday, November 19th in the episode The Big Scary U. Last the audience had seen, he was almost taken out by Rick but was able to take cover in a nearby bunker. Unfortunately, Father Gabriel has the same thought when he is left behind by Gregory, and is currently trapped with the violent Saviors’ leader. If anything, Negan and his crew now know there is a mole within the group and hopefully Dwight can keep the suspicions off himself. Only time will tell but until then, CrypticRock gives Some Guy 3 out of 5 stars. 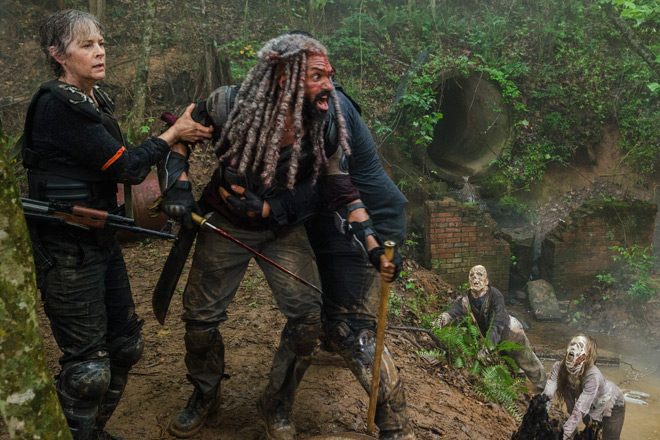