Initially launching October 23rd of 2016, Season 7 of AMC’s The Walking Dead has been quite a long haul. First fans were exposed to a brutal, gory, and harsh reality before slowly being eased into the new world of their beloved characters. A fresh storyline which has seen some fans lose interest while others are eager to see what is coming next, after 7 building block episodes, the mid-season finale had a lot to offer when airing on Sunday, December 11th.  The last episode prior to a lengthy break for the holidays and NFL playoff season, Episode 8, entitled Hearts Still Beating, saw Negan continue his torturous reign in Alexandria, taking more lives, and finally, pushing Rick over the edge. 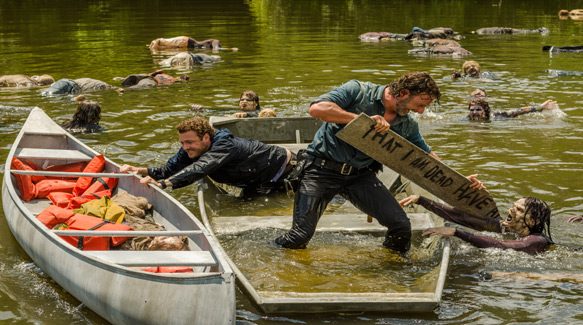 The core group for the most part have been separated ever since the tragic loss of Glenn and Abraham back in the premiere, some too afraid to fight back, while others wanted to avenge their friends. As the first half of Season 7 comes to a close with Hearts Still Beating, directed by Michael E. Satrazemis, the beaten down characters finally reunite and plot their biggest challenge yet. It helps boost morale, but raises more questions than answers.

Never breaking from his menacing charm, Negan brings Carl “safely” home to Alexandria, and stays a while to wait for Rick, who is out scouting with Aaron. He makes his presence known as usual, pressing whatever sanity the community has left. When Spencer makes a fatal mistake, the situation spirals out of control, sparking a domino effect that results in further loss for the group. Rick takes in the recent events very carefully, finally more level-headed to face Negan and his large army. Across the way, towards The Kingdom, Richard (Karl Makinen) pays a visit to Carol and Morgan, asking of them to convince King Ezekiel to strike first against The Saviors. Both parties refuse, but that could soon change upon learning about those closest to them. 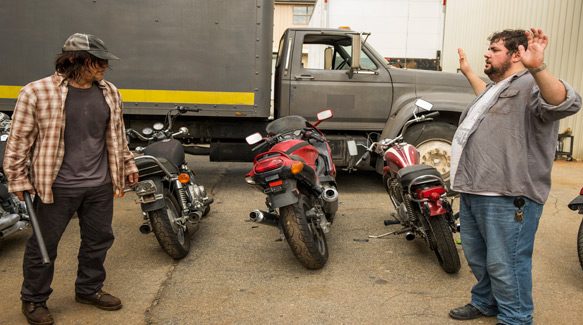 Hearts Still Beating is bookended with scenes of Maggie paying respect to Glenn and Abraham. Donning a familiar look of baseball cap and gloves, it was a brilliant expression of how the group began and where they are going. Carol’s decision to leave in Season 6, although unintentional, seems to have sparked the unfortunate events that has plagued the group as of late. She single handedly killed a good portion of Negans men that were headed towards Alexandria in episode 615, East, and still chose to venture on her own. Knowing what she is capable of, her attitude thus far has been frustrating, and hopefully the knowledge of Negan’s further wrongdoing will spark the Carol we all know and love.

Despite Negan’s torment, there is finally a moment of hope towards the end of the mid season finale. After the group being separated and bullied into submission, their reunion at The Hilltop was surely an emotional one. The bro-mantic hug between Rick and Daryl barely left a dry eye, both in the moment on set, as well as for those watching from home. Rosita’s acceptance of Sasha was also an important act, finally realizing that facing a common enemy is more effective together, despite recent history. 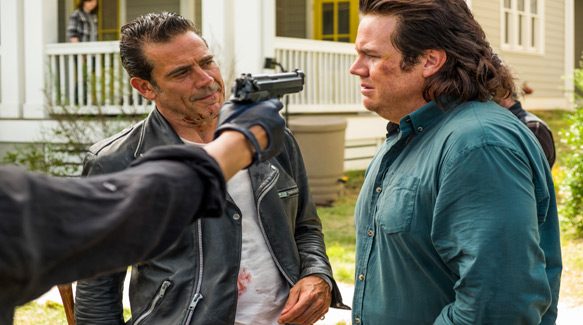 Rosita’s own anger and reckless thinking has only caused more turmoil, Father Gabriel trying to be a voice of reason to her before things got worse. Despite his positivity, his words could not save Spencer either, his hatred for Rick blinding him until his death. Interestingly enough, Austin Nicholls and Jeffrey Dean-Morgan filmed this scene in one take, Morgan actually “stabbing” a bag Nicholls was wearing under his shirt, slicing across perfectly so the “guts” could fall out.

Although leaving the audience on a more positive note, Hearts Still Beating raises even more questions, such as, how long will it take Negan and his Saviors to realize Daryl escaped? What does he plan on doing with Eugene? Who is the mystery character spying on the group from the woods? Where the heck is Heath? With so much on the line, the mid-season premiere will return to AMC on February 12, 2017, and not a moment too soon. Until then, CrypticRock gives Hearts Still Beating 4.5 out of 5 stars. 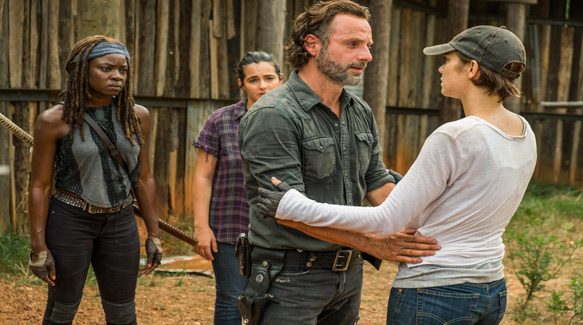