The Walking Dead – The King, the Widow, and Rick (Season 8/ Episode 6 Review)

The politics within the communities of AMC’s The Walking Dead only get more complicated as Rick, Maggie, and Ezekiel deal with the repercussions of a war that has only just begun. They clearly have a plan to stick to, but tensions rise as patience runs thin and strategies are tested from all sides as seen on Sunday, November 26, 2017 when The King, the Widow, and Rick made its premiere. 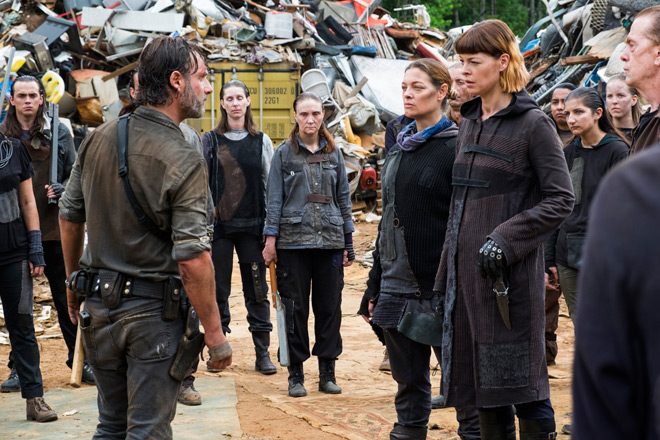 The sixth episode in Season Eight, it begins with all the leaders recapping their recent dealings with the Saviors, letters placed at a checkpoint for Rick as he heads to the garbage dump to make another deal with The Heapsters. Upon making another offer to either join him or be destroyed, Jadis refuses yet again and instead takes Rick hostage. Being their recent history, it’s surprising Rick would take this tactic and it will be interesting to see what the next move will be. It’s possible Aaron will head to that location since he left the Hilltop so quickly, Enid now with him.

Meanwhile Michonne, who has been at Alexandria since the war officially began, feels the need to see the action for herself so she can have a piece of mind. Rosita goes with her and they come across music, a queer noise in a post-apocalyptic world. Following it to a nearby building, they find two Saviors putting together speakers on a truck playing Classical music, nicknamed the Fat Lady. It’s meant to drive the walkers away from the Sanctuary, a plan that almost works but luckily Daryl and Tara were there to help stop the truck from reaching its destination. 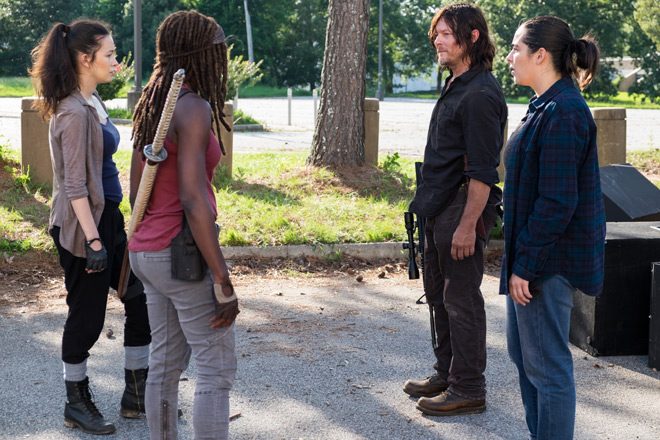 Hellbent on revenge, they head towards the Sanctuary to do more than just have a look. In the beginning of the episode, Rick’s words in his letters were to meet at the Sanctuary in two days to finish what they started. Daryl and Tara may have been at the right place at the right time to stay ahead of the Saviors, but attacking the Sanctuary early without the help of the rest could do more harm than good.

This is all while Carl heads out into the woods to find the stranger he encountered at the gas station in Season Eight’s opening episode, Mercy, before Rick scared him off. Wanting to give him a chance, he provides food and water, and asks him the three questions that are still relevant to enter their community. The stranger, named Siddiq, played by Avi Nash (Learning to Drive 2014, Barry 2016), seems trustworthy but hopefully Carl’s instincts are right; in such a delicate time, it is hard to tell who to trust. Negan was able to get a good look at Carl last season and certainly knows how to manipulate people, so he could have anything up his sleeve. 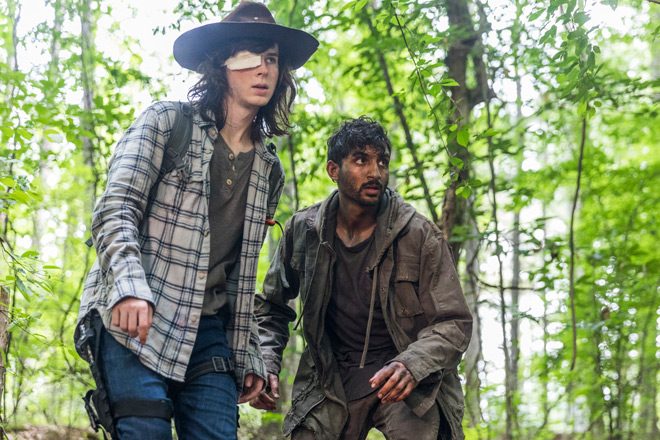 Still struggling with having Saviors at The Hilltop, Maggie decides to build a prison to hold them for the time being, along with the untrustworthy Gregory. Jesus believes he is making a breakthrough, but Maggie reveals she plans on using them as bargaining chips to exchange for their own people – their lives on the line if she can’t. Jared still seems to be the biggest problem, not intimidated by his current situation at all. Can Dillon (Callan McAuliffe: I Am Number Four 2011, Hacker 2016) keep him under control to stay alive? Also, how will Gregory adapt to his new environment?

Additionally, back at The Kingdom, Carol struggles to bring Ezekiel back to his community to lead his people; now a broken man who chooses to grieve on his own, no longer able to play “his part.” For Carol, playing an act has been her key to survival and hopefully she can make Ezekiel see that. It will be interesting to see how Henry (Macsen Lintz: Hall Pass 2011, Scary Movie 5 2013) teaming up with her will pan out, being her recent dealings with children do not usually work out too well. It is no coincidence that Henry has a strikingly similar look to the late Sophia, played by Madison Lintz, as they are siblings in real life. 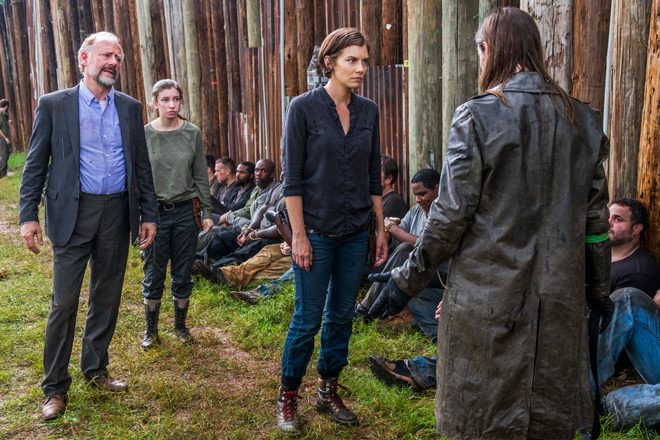 Showing more politics than action, The King, the Widow, and Rick explored many angles of the war against The Saviors, Rick and his team still having the upper hand but for how long? Daryl and Tara not sticking to the original plan could really backfire, and trusting anyone to join communities is very risky despite holding onto humanity.

With one leader broken and the other forced to babysit, could this leave Rick in the dark? With only two episodes left, the mid-season finale is closing in and every moment and act is crucial to win this war. Await what happens next in the episode Time After Time, but for now, CrypticRock gives The King, the Widow, and Rick 4 out of 5 stars.