Following the return of AMC’s The Walking Dead with Rock In The Road, On Sunday, February 19th, New Best Friends gave Rick a little more hope involving his plan to rally against The Saviors. Directed by Jeffrey F. January, New Best Friends holds an appropriate title, possibly adding more to the group’s army, given they can meet some requirements. While the latest chapter in Season Seven had a slower pace, it was not without rewarding content, solving recent mysteries, while adding new challenges. 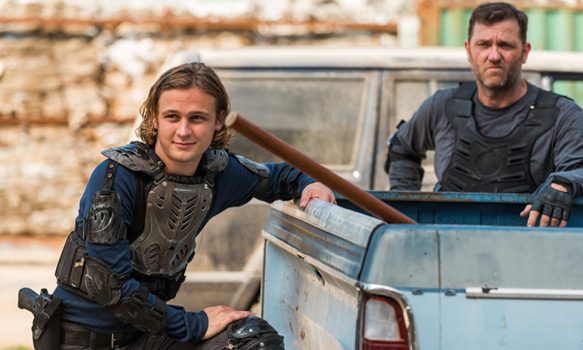 Beginning with King Ezekiel’s frequent meet with The Saviors, matters almost get out of hand when one picks a fight with Richard. Ezekiel forces him to yield while The Saviors confiscate some of their weapons, on top of the supplies The Kingdom provides. Clearly frustrated, Richard devises a plan with Daryl to strike their enemies first to motivate Ezekiel to move against them. When Daryl finds out the plan involves putting Carol in danger, he refuses to help, threatening Richard if anything happens to her.

Tracking Father Gabriel to a junkyard, Rick and his group run into a large community, a strange group with impressive military tactics. Run by Jadis (Pollyanna McIntosh: Exam 2009, The Woman 2011), she listens to Rick’s plea regarding The Saviors. She decides to test him, an exercise they call ‘up up up’, which involves Rick to defend himself against a walker who is armored with a helmet and spikes. Determined to prove his worth, he completes the challenge, and eventually reaches a deal with Jadis, giving him much to smile about.

Now aware of Carol’s whereabouts, Daryl decides to pay her a visit. A heartwarming welcome, Carol greets him with open arms, immediately moved to tears. She tells him the reason for her leave, and he makes a difficult decision to protect her.

Keeping his eye on the prize, Rick truly showed where his head is at in New Best Friends. Not giving up hope on Father Gabriel led him to a new community who are willing to join their fight, given they can find guns for them. They have a strange way about them, but are sure to be a worthy ally against Negan. This does poke at Tara a bit, who is aware of such a find, so it will be interesting to see how this plays out. 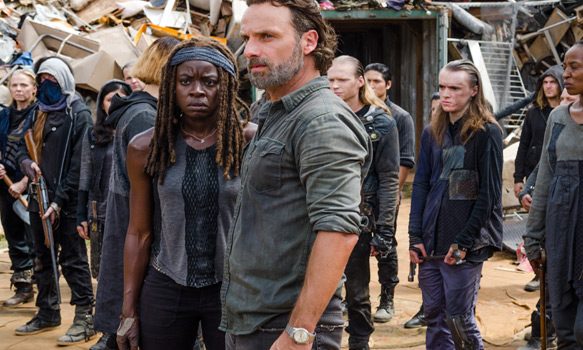 The reuniting of Carol and Daryl surely brought on tears by fans, the two having such a long history. Daryl’s decision to lie to her was a frustrating choice, but not without good reasons. King Ezekiel’s right-hand man Richard could possibly be a loose cannon, having good intentions, but clearly not thinking straight, much like Rosita.

Winslow, the armored walker Rick had to defeat, was truly a work of art by Greg Nicotero and his makeup effects team. Performed by Actor and Makeup Artist Gino Crognale (Land of the Dead 2005, 6 Souls 2010), the look was intense, prosthetic and rubber spikes and knives poking through his back and torso, and wearing a helmet donning the same weaponry. His eyes covered by the headwear only made him look more monstrous, his teeth a main focus other than the spikes, and a decayed torso helped to complete the look.

Another interesting scene was Daryl’s talk with Morgan after visiting Carol. While trying to push him to convince Ezekiel to join their fight, one could not help but notice how Daryl was with Shiva, having a natural understanding of being a caged animal. Now escaped from The Sanctuary, he prepares to release a beast from within to exact revenge on Negan and his Saviors.

Overall, New Best Friends was a satisfying episode, filled with accomplishments, motivation, and humor. Given that Rick and the group can complete the deal for the Heapsters, a name for the junkyard community revealed by Pollyanna McIntosh on Talking Dead, they will be that much closer in defeating The Saviors. There is still much to be done, but the group seems to be moving ‘up up up’ in the right direction. Until the saga continues with Hostiles and Calamities, CrypticRock gives New Best Friends 4 out of 5 stars. 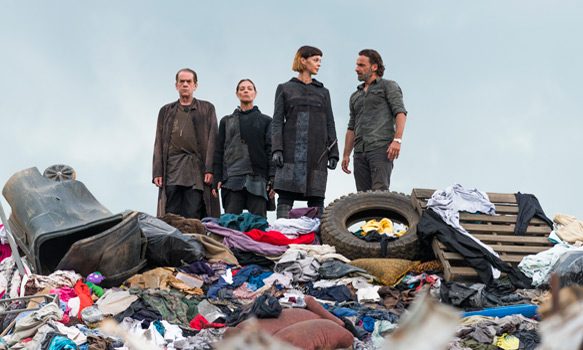