Following the historic Super Bowl LI game between the New England Patriots and Atlanta Falcons, AMC’s The Walking Dead returned on Sunday, February 12th, with the new episode Rock in the Road. While stories from the first half of the season are beginning to connect, and while A Rock In The Road was much calmer than the season premiere, The Day Will Come When You Won’t Be, it still provided a load of excitement for beloved fans.

It all picks up with Father Gabriel on watch before suddenly breaking into a panic. He packs up the communities food and supplies, and drives off. His intentions are unclear, but one thing that is certain is he was not alone. 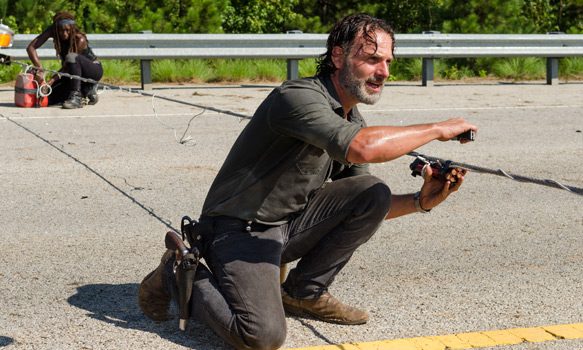 After successfully recruiting members of The Hilltop for the fight against The Saviors, with no help from Gregory, Jesus leads the group to The Kingdom in hopes to convince King Ezekiel to help. He is hesitant, as his way has kept peace amongst the residents, who are unaware of The Saviors “taxes.”

Upon leaving, Rick encourages Daryl to stay, both in hiding as well as to be a voice of reason to the King. This move proves wise, as Simon and his crew show up soon after their arrival back home at Alexandria, tearing apart every corner in search for Daryl. They soon after learn of the disappearance of their supplies, along with Father Gabriel. While they search for him, they come across an unexpected surprise.

The first half of Season 7 took a brutal turn, breaking the main characters into separate pieces, and there is no doubt a wave of emotions where retaliation would have only made matters worse. That in mind, it is exciting to see Rick and the group focused again, working together for their biggest challenge yet. The main proof of this was them dealing with the herd of walkers on the highway, using the cars left by The Saviors rigged with explosives; even more so with the stunt pulled off by Rick and Michonne. While recruiting, the tale of Rock in the Road told by Rick deserves an applause, giving Ezekiel more than a desperate plea. 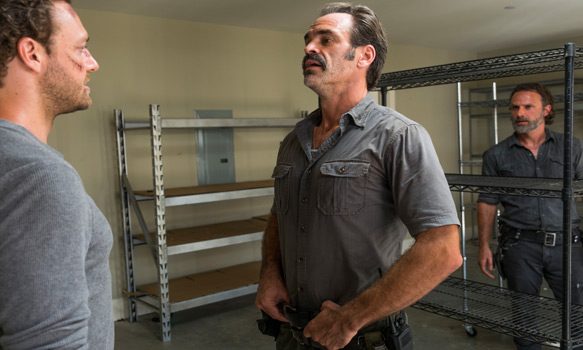 Then there is Carol, still acting alone, but now with Daryl close by. There is hope amongst fans that he could be the one to bring her back, but not just yet, as Morgan keeps his promise of secrecy to Carol.

Above all, Father Gabriel certainly raised some eyebrows and his actions remain a mystery. This in mind, although brief, the opening scene with his frantic exit from Alexandria was downright creepy.

In the midst of the seriousness, Rock in the Road was not without some antics that made fans chuckle. For example, Xander Berkeley as the stubborn Gregory is the perfect mixture of sarcastic humor, despite his frustrating self. Director Greg Nicotero mentioned on Talking Dead how during filming, Berkeley would call Andrew Lincoln all various names other than ‘Rick’ to push everyone’s buttons, a hilariously annoying tactic. 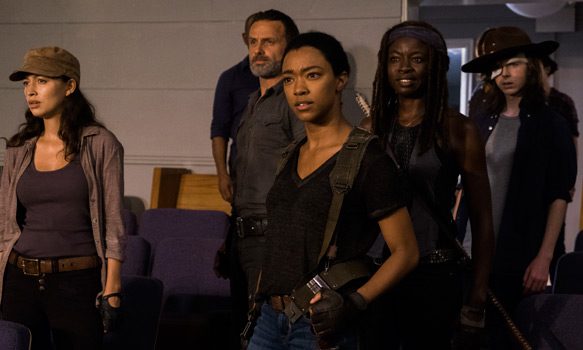 Furthermore, the re-introduction to King Ezekiel was an expected reaction, but everyone’s faces laying eyes on Shiva was utterly priceless. Of course, who could forget Cooper Andrews as Jerry, a light-hearted smile and comments that can light up any room, even in discussions of war.

Continuing to strive for ways to deal with the original threat of the new world, cast and crew top themselves with yet another crazy stunt to take out a ton of walkers. Richonne’s teamwork skills had most couples questioning their own relationship goals, a fitting scene just shy of Valentine’s Day. A fun fact about the location used in the highway scene, it was last seen in Season 2, just before Sofia (Madison Lintz) ran away in the episode What Lies Ahead.

After the holiday break, Rock in the Road was a refreshing start to the second half of Season 7. Not everything is accomplished, but seems to be heading in the right direction. Of course, there is more mystery dropped along the way, but this is what keeps the story intriguing.

Needless to say, fans are certainly strapped in for the ride, determined to see the end of Negan and his Saviors. Welcome back Rick Grimes of Alexandria, you have been missed. Until February 19th, New Best Friends, CrypticRock gives Rock in the Road 4.5 out of 5 stars. 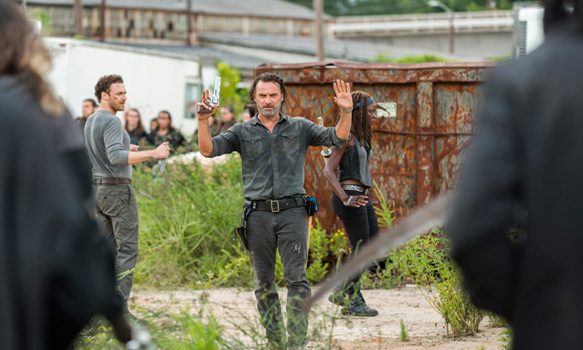