Following a rather slow moving storyline in the episode Hostiles and Calamities, AMC’s The Walking Dead returns to the series’ beloved characters on Sunday March 5th in Say Yes.  Directed by Greg Nicotero and written by Matthew Negrete, the latest chapter in the story is a mix of love, uncertainty, and a good dose of zombie killing action. 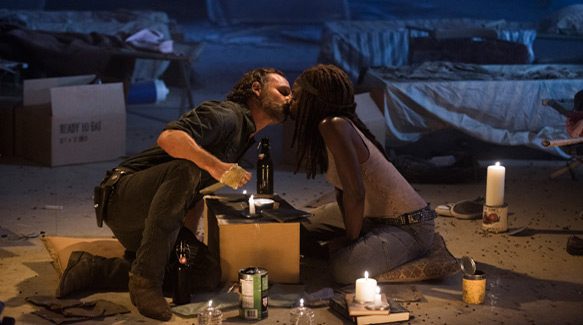 Picking up after Rick and the crew’s new deal with the Scavengers in New Best Friends, he and Michonne set out to gather up as many guns as possible. A sort of vacation for the two, while the world is in decay around them, they find moments to share release their passion for one another.

In between the love making, they stumble upon an abandoned school carnival laden with a ton of walkers. Fortunately for them, they hit the jackpot when falling through the waterlogged roof of the school to find a ton of supplies. Bedding down in the well-secured school overnight as they plan their attack to snuff out the walkers and gather all the weapons, Rick suggests to Michonne they pace themselves, clearly enjoying the alone time with her.

From here they go onto a zombie carnival killing spree. In the proceed Michonne has the scare of her life, thinking Rick is devoured by a group of walkers after falling off a rusted out ferris wheel. A tense moment filled with anguish, it later is followed by a heartfelt conversation between Rick and Michonne as he confesses the reality of the war they are about to embark into with Negan and The Saviors. Stating the honest truth that there will be many casualties, including possibly his own, Rick bravely says it will all be for the better good of all in the outside world once it is over. 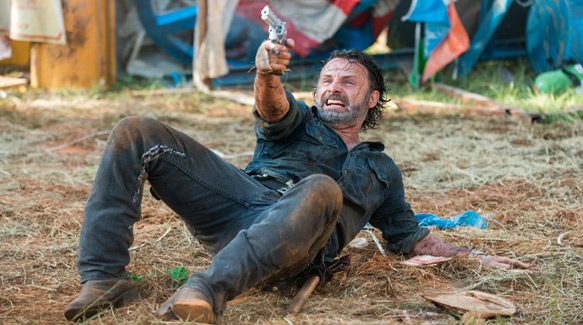 Meanwhile, back at Alexandria, Rosita’s patience is running thin and she still seeks to attack Negan immediately. Traveling off to The Hilltop, she confronts an equally heartbroken Sasha to team up in a quest to kill Negan once and for all. Will their plan work, or is it a nearsighted attempt with rage in their eyes clouding their judgement?

Say Yes was another slow go, but it was a surreal moment in the zombie apocalypse. Being that Negan is not aware of the group’s plans to fight back, Rick and Michonne got a moment of freedom, a date that neither of them wanted to end. Upon the brief loss of Rick, Michonne got a harsh lesson of reality of the possibilities that may happen during their fight, something she clearly did not think through. On the other end of the spectrum, Rosita is dealing with her loss impatiently, taking it upon herself still to take out Negan, wholeheartedly accepting it to be a one way street. Meanwhile, despite all the possible losses the group will experience, Dwight and Sherry are the perfect example of “living with it” is not an option.

It is clear that the creative minds behind The Walking Dead are gearing up for a full blown war that no doubt will be bloody and include a ton of casualties. The question is when will the first strike be mapped out? There is a lot of risk involved in Rick and the group’s plan to go to war. For one, they still do not have Ezekiel and the Kingdom on their side. Two, the Scavengers continue to play hard ball, demanding the guns Rick and Michonne gathered are still not enough. Three, will Tara finally break her oath to the women at the Oceanside and tell Rick of their existence?

There is so much left to happen before the impending war begins. There is still the issue of Eugene’s captivity. Is he sincerely devoted to Negan now, or is he just tricking the deranged leader into thinking so? Only time will tell where everything goes from here and with four more episodes left before season seven if complete, chances are this preparation will drag out much longer. There is an older saying, good things come to those who wait, and less patient The Walking Dead fans hope the build up is well worth it once the first shot is fired. Until Sunday March 12th episode Bury Me Here, CrypticRock gives Say Yes 4 out of 5 stars. 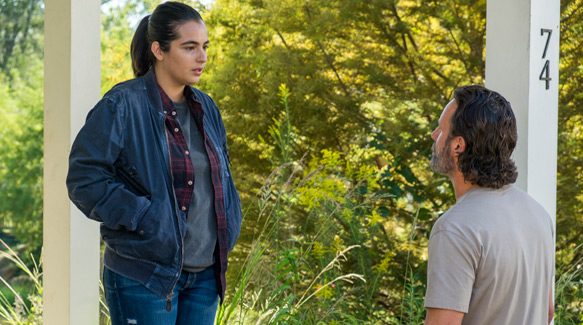