The Walking Dead – Something They Need (Season 7/ Episode 15 Review)

As the grains of sand dissipate in the up and down seventh season of AMC’s The Walking Dead, fans patiently wait for something big to happen. On the edge of their seats until the season finale, on Sunday, March 26th, fans had a chance to revisit Oceanside as well as see a different side of Gregory in Something They Need. In the latest episode, directed by Michael Slovis, viewers learn Sasha is alive, but not necessarily well, being held captive by Negan, who is intrigued by her and wants her to join him. Meanwhile, Eugene sheds some light on his decision, but Sasha may choose a different path. 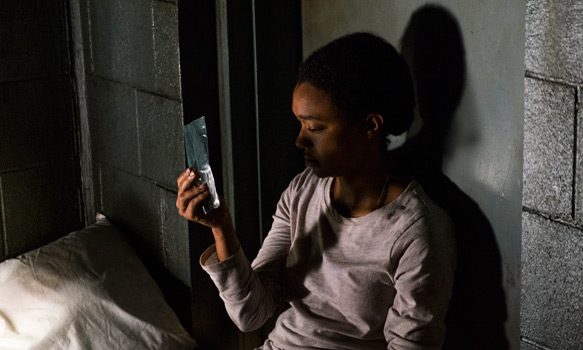 After going rogue and rushing The Sanctuary, Sasha has been captured and is currently locked in a cell. A creepy Savior named David comes inside and attempts to rape her, until Negan puts an immediate stop to it, that behavior not tolerated despite their aggressive ways. Seeing use in her, he tests Sasha to see if she would consider joining him, a decision she struggles with.

Desperate to gather weapons that they will need for the near future, Tara breaks her promise to Cyndie and helps Rick take over Oceanside. Showing self control and teamwork, they manage to accomplish the mission without hurting anyone, except for a group of walkers, allowing the locals to help fight. They explain their situation, and being that Oceanside were affected by The Saviors as well, they will hopefully add more numbers to Rick’s army. When they return to Alexandria, Rosita reveals a mystery character claiming he wants to help.

Setting up for the season finale, some of the last chess pieces are moving into place before the real games begin. Tara revealing Oceanside was surely a difficult decision, but a necessary one, as there is much more at stake. Rick’s strategy was intriguing to watch, showing the group has a chance against Negan as long as they work together and stay a few steps ahead. It will be great if Oceanside joins the fight, if they can convince Natania to see past her own stubbornness. 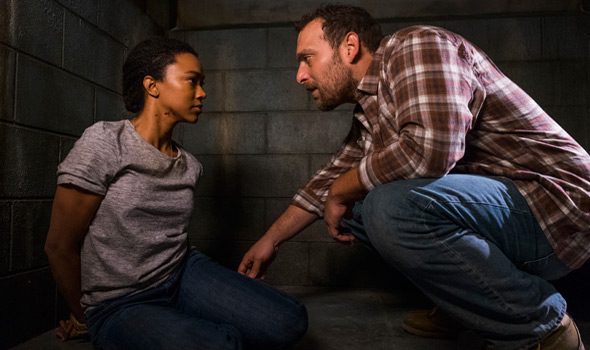 Sasha is in a unique position, since both Rick and Negan are unaware of what her next move will be. The scene with Negan saving her from “Rapey David” is, so far, framed right from the comic, and readers will have strong thoughts of an iconic moment that should happen soon. Eugene’s point of view for his latest decisions may be somewhat understandable, but are still disappointing. He may be surviving, but Dwight should be the perfect example that life in The Sanctuary is not as luxurious as Negan makes it sound.

Gregory is certainly raising eyebrows, revealing a lot about himself in the short moment with Maggie. It brings on the question on how he obtained his position in the first place, as he does not seem to do much except sit and drink in his office. Clearly struggling with losing The Hilltop’s respect, it is a strong possibility he is headed to Simon for help. Negan revealed to Sasha on how a “little birdie” told him of Rick’s actions, and Gregory right now should be a top suspect.

As for the main subject of the show, Greg Nicotero and his team yet again topped themselves with an interesting group of walkers. Coming from the ocean, barnacles and seaweed mix with the decay, creating a unique look that really fit the scene. Attention to detail is key, and the makeup effects team nail it every time.

Something They Need lefts fans wanting more, and with only one episode left, it is hard to imagine what will be crammed into the extended finale, titled The First Day Of The Rest Of Your Life. This could finally be the moment everyone has been waiting for, the moment where Negan is taught a serious lesson. One thing is for sure, the finale is going to be a big event for every viewer watching, and hopefully it will meet their expectations. Until then, CrypticRock gives Something They Need 4.5 out of 5 stars. 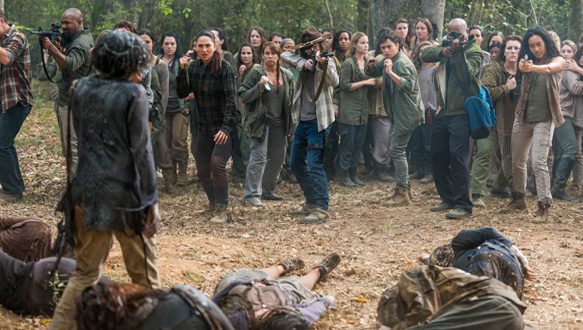