War for the Planet of the Apes (Movie Review)

“You are impressive. Smart as hell. You’re stronger than we are. But you’re taking this all much too personally.” –  says The Colonel (Woody Harrelson: Cheers series, Natural Born Killers 1994).

This is the crux of the dilemma in War for the Planet of the Apes, hitting theaters on July 14, 2017 via 20th Century Fox. In Matt Reeves’ grim capper of the reboot/prequel Planet of the Apes trilogy, a brutal tragedy sets ape leader Caesar in pursuit of vengeance, at odds with himself as well as the dwindling human survives of the simian flu pandemic. This is a dark but rewarding finish to Caesar’s journey to lead and inspire the nascent ape civilization. 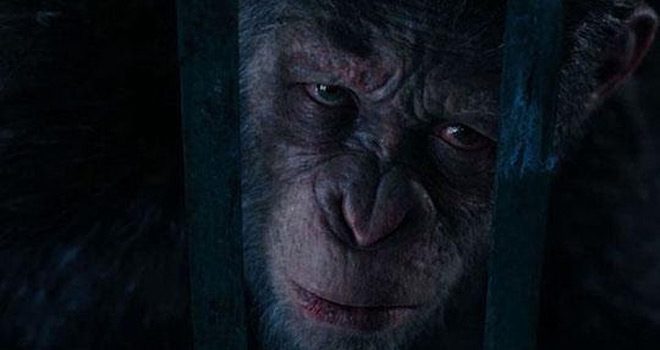 So it makes sense that the human beings in this series would be treated increasingly as afterthoughts. It is true of them here to a degree. Harrelson’s Colonel leads the militaristic Alpha-Omega, a group bent on killing off all apes to secure the planet for humankind. “There are times when it is necessary to abandon our humanity to save our humanity,” the Colonel says. In not thinking rationally thanks to this fanaticism (the Colonel also describes his urge to wipe out the apes as waging a “holy war”), Alpha-Omega attacks Caesar’s waterfall hideout to send a message to the apes, killing many of his men but also apes close to Caesar. 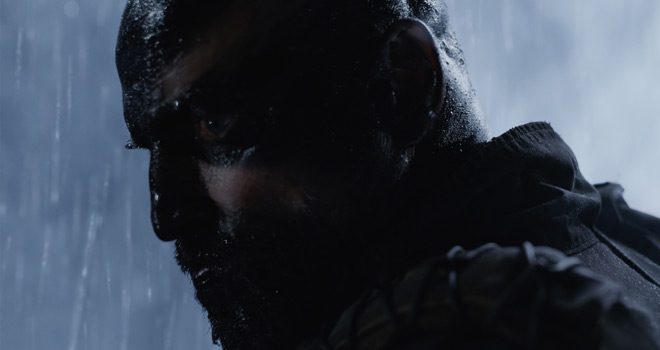 Caesar, after an earlier battle with Alpha-Omega, had shown mercy on human prisoners by sending them back to the Colonel with a message to leave the apes alone. As this goes unheeded and results in the deaths of those he loves, Caesar, not thinking rationally in response, sets out for revenge. His loyal ape friends, the trusty Rocket (Terry Notary: Avatar 2009, The Hobbit series), sensitive Luca (Michael Adamthwaite: Final Destination 5 2011, Kindergarten Cop 2 2016) and wise Maurice (Karin Konoval: Diary of a Wimpy Kid 2010, Scooby-Doo 2: Monsters Unleashed 2004), join him despite wanting to go alone.

They also meet a young girl (Amiah Miller: Lights Out 2016, MacGyver 2016, her name revealed later in a nod to the original) and a hermit called Bad Ape (Steve Zahn: Diary of a Wimpy Kid series, Saving Silverman 2001), who provides some welcome laughs in an otherwise stoic and harsh story.

The emotional core of War of the Planet of the Apes resides here. It could be argued that the plot is weakened by these seemingly nonsensical choices by both Caesar and the Colonel, but it is clear that the end is near for all parties involved. There is a weary and exhausted desperation to Andy Serkis’ brilliant performance as Caesar, augmented by the incredible special effects work of Weta Digital. He just wants the apes to be safe and for this constant battle with humanity to be over. So he sends his fellows apes off to a rumored safe haven in the desert so he can concentrate on his revenge.

Revenge, though, was what fueled Koba’s wrath in the previous film. Their conflict was so bitterly waded, that Koba haunts Caesar in hallucinations as he treks to kill the Colonel. Koba’s scars were created by his mistreatment at the hands of humans in Rise of the Planet of the Apes. Caesar, always aware of the good humans could do from his own experiences, has always borne the weight of this dual insight. He knows their best and their worst. 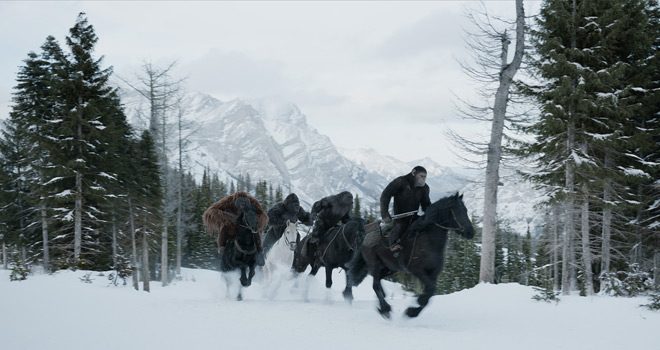 The Colonel is fighting a different kind of battle. Aside from the apes, the simian flu that nearly wiped out humanity has mutated; surviving humans are being born and turning mute. He indeed loses his humanity through his attempts to contain both threats. This is where the apes’ and humans’ paths cross. Alpha-Omega ironically looks to fight like cornered animals, holding themselves up and building a wall to fortify their meager bunker. What is left of the United States military is coming to defeat the fanatic Colonel and his team, who are not only enslaving apes to build this wall, killing those who will not submit, with an eye on killing them all anyway. They are also killing mute humans. The historical and political suggestions are clear.

That humanity would act as panicked animals is not surprising, and Reeves’ direction makes it clear who he is siding with. These Apes films are rare pieces of mainstream pop art that allow us to meditate on humanity’s ultimate place in nature. The irony in the trilogy’s trajectory, that in trying to heal ourselves, we lay the groundwork for and ultimately ensure our own doom, is handled with gravitas and grace.

War of the Planet of the Apes, being the coda that it is, sometimes can feel a little too brutal (especially for a PG-13 film) in how it handles this inexorable end. It does allow viewers to see more of themselves in the apes than the human antagonists. However, suggesting perhaps not only the kinship we have with our primate cousins, but also that the sense of compassion we feel for each other is something not limited to humans or apes. It is something that will arise given the right conditions. 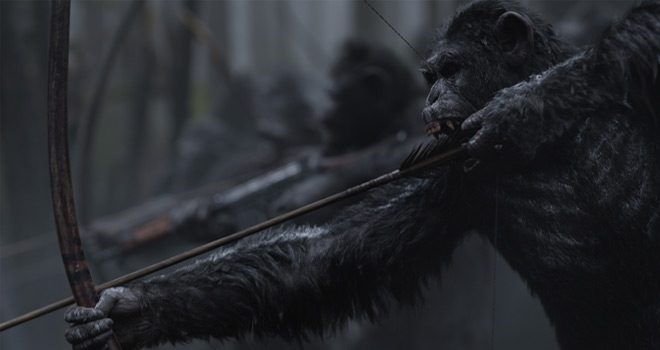 Ultimately, War for the Planet of the Apes is a great ending to a finely crafted trilogy. Michael Giacchino’s memorable score builds upon his work in Dawn of the Planet of the Apes, lending the film the right tones; tender and elegiac for the plight of all involved, foreboding and thunderous elsewhere. Michael Seresin’s cinematography establishes a bleak, wintry realism, taking us from the delicate safety of the apes’ waterfall abode through desolate, snow-choked forests to the Alpha-Omega stronghold of rotting architecture, rusted metal, and splintered wood walls.

While it does not quite reach the heights previous entry Dawn of the Planet of the Apes did and Reeves’ desire to bring Caesar’s journey to a grand conclusion feels heavy-handed at times, but it does conclude the trilogy in engaging and satisfying fashion. For this, CrypticRock gives War for the Planet of the Apes 4 out of 5 stars. 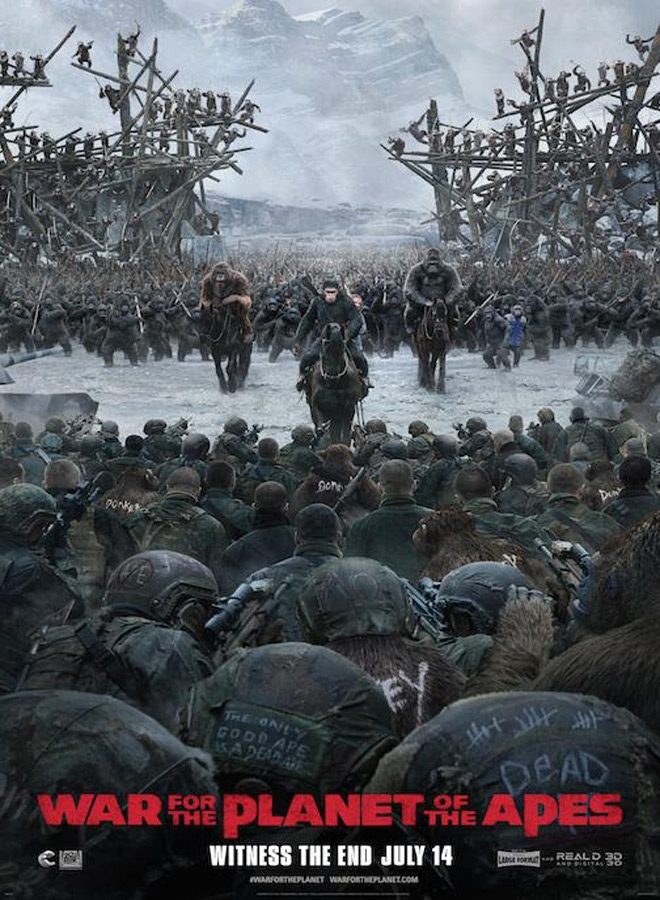