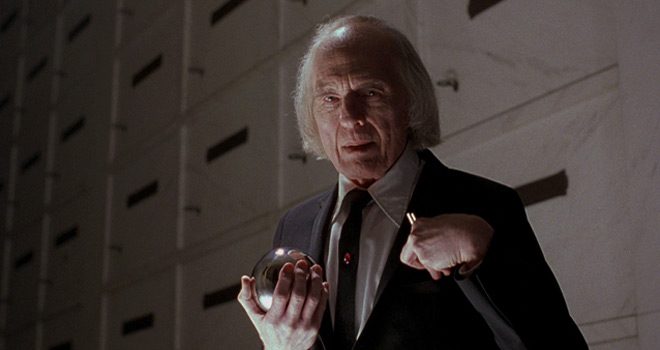 The third film in the Phantasm franchise, it opens with Mike (Baldwin) driving the hearse with the yellow gash in his head as he looks back on his life with The Tall Man (Scrimm), trying to make sense of it and the recent discovery that he has a chrome sphere in his own head. Reggie (Bannister) is left alone with The Tall Man (Scrimm) facing imminent death at the prongs of blood-draining chrome spheres. Rocky (Gloria Lynne Henry: The Devil’s Advocate 1997, Phantasm: RaVager 2016) has driven off, and the poor, much-maligned Tim (Kevin Connors: Prehysteria! 2 1994, Pleasantville 1998) is nowhere to be found after he was taken through a pane of glass by a cadaver in a body-bag.

Reggie seems to have no memory of him or Rocky, and they are never mentioned again in the film. Rocky does however make a very brief appearance in 2016’s Phantasm: RaVager. The Tall Man lets Reggie go with the parting line: “Small man. You’re end approaches, but it is not yet. Take great care how you play. The final game now begins.” Then hundreds of spheres fly through the halls of the mausoleum and the title card comes up. Reggie then continues his journey as the reluctant hero to try and help Mike in any way he can.

Budgeted at just an estimated $650,000, much less than Phantasm II or III, but larger than Phantasm, OblIVion made the best of its small budget by using large, open locations like Death Valley State Park where the majority of the film takes place. Any interiors that were used were built small and cheap. This smaller budget also forced Coscarelli to get creative by using deleted scenes from Phantasm as filler. Granted, some of these scenes may not make sense, but if the viewer has grasped the concept of multiple realities cryptically referenced throughout the series, they make perfect sense. 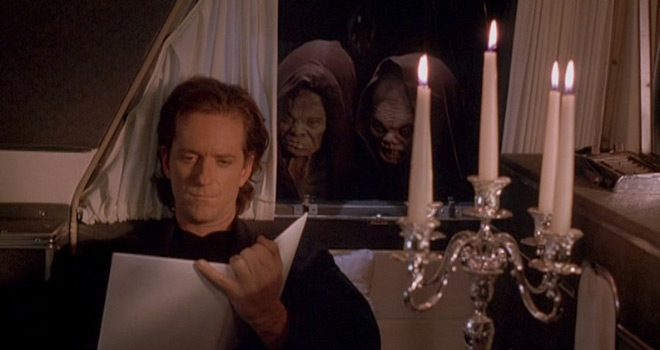 The footage from the original Phantasm was all excised and extended scenes, like an alternate ending where Mike and Jody hang The Tall Man and then Mike sets him free. Another deleted scene is set up as being The Tall Man’s first appearance in the town, passing by Mike and Jody in his hearse. It was pretty much a genius move in that they didn’t need to recast and reshoot these flashback sequences, as that would have been very costly and time consuming.

The Phantasm series has spanned four decades, so it isn’t a “new year, new sequel” type franchise. After OblIVion‘s release in 1998, fans were hungry for another sequel, but they had to wait another nineteen years for RaVager. Between that time, there were rumors of sequels being in the works. One such rumor was Reggie’s Tales, a supposed web series of shorts that would chronicle the further adventures of Reggie. These shorts ended up evolving into RaVager, which may now be the end of the current incarnation of the franchise.

As for Phantasm: OblIVion, the cast only consisted of the essential players and two additional roles, Heidi Marnhout (Bubba Ho-Tep 2002, Imagine That 2009) who played another one of Reggie’s “ladies” who end up being just another one of The Tall Man’s minions, and Bob Ivy (Stunts: Near Dark 1987, John Dies at the End 2012) who played the Demon Trooper. A. Michael Baldwin reprised his role as Mike and served as a co-producer, which was the main stipulation of him coming back for another Phantasm. 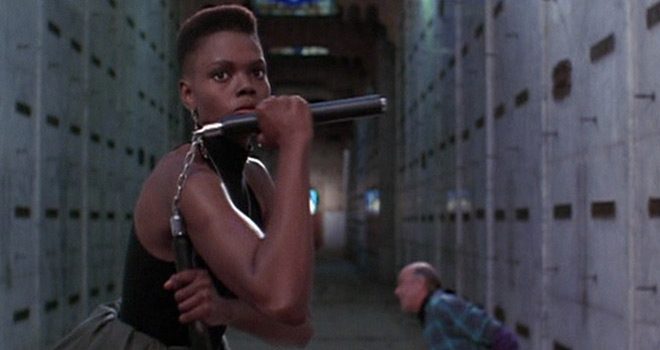 Reggie is still the reluctant hero trying to save Mike from The Tall Man in as entertaining a way as possible. A great moment for Reggie is when he finds Mike’s hearse in the desert and the montage of him getting ready and putting on the ice cream outfit from Phantasm with the quad-barrel shotgun in hand. Bill Thornbury is back as Jody, but this time he is not the same helpful “ally” as in Phantasm III. Finally, Angus Scrimm, a modern day Boris Karloff or Bela Lugosi, returns as the sinister, enigmatic Tall Man to menace Mike and Reggie for reasons that are only known to him.

Just like Phantasm III, OblIVion was set up to be the end of the series, answering all the questions. One thing they did answer, though, was the origin of The Tall Man. He started out as a kindly undertaker named Jebidiah Morningside who was obsessed with death and science. He created the dimensional fork, or space gate, and stepped through to see what was on the other side. However, Jebidiah never came back, only The Tall Man. Scrimm got to break loose from the bonds of The Tall Man to play a character more akin to his real self, Rory Guy. As monumental as these two sequences were, Phans were left clamoring for more information, like, what happened to Jebidiah in the Red Dimension? What did he see? What took on his form and returned to Earth?

For the longest time, the end of Phantasm: OblIVion was the most cryptic ending of the series, and at the time, was the end of the series. Mike used his own Tall Man-like powers to try and blow up The Tall Man with the hearse he fashioned into a bomb and succeeds. Then, strange harmonic sounds occur around a fiery desert twister that matches the tones of the dimensional fork, which reactivates, and a fresh new Tall Man walks out and assesses the situation. Mike stares in disbelief as The Tall Man comes over and rips the ball out of his head and makes his way back through the dimensional fork. Mike is dying and Reggie goes back through the fork. The camera zooms into Mike’s eyes and he remembers walking around his town at night as a kid and getting picked up by Reggie in the ice cream truck. 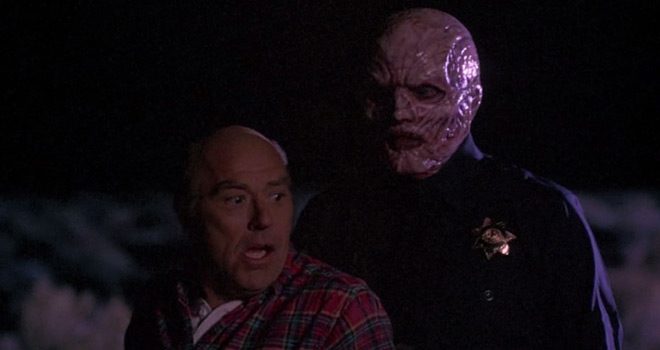 They both hear Mike and Reggie’s last words to each other, and when Reggie asks “Hey, did you hear something?” Mike shrugs it off and says, “It’s only the wind.” He then looks down and a sense of certainty crosses his face, “It’s just the wind.” The ice cream truck drives off into the darkness and the credits roll. Before all of this happens, The Tall Man has a hold of Reggie and he asks, “What do you want?” The Tall Man replies, “Ice cream man: it’s all in his head.” This in mind, Phans were left wondering just what all of this meant, but that is Phantasm: seeing is easy, understanding takes a little more time. 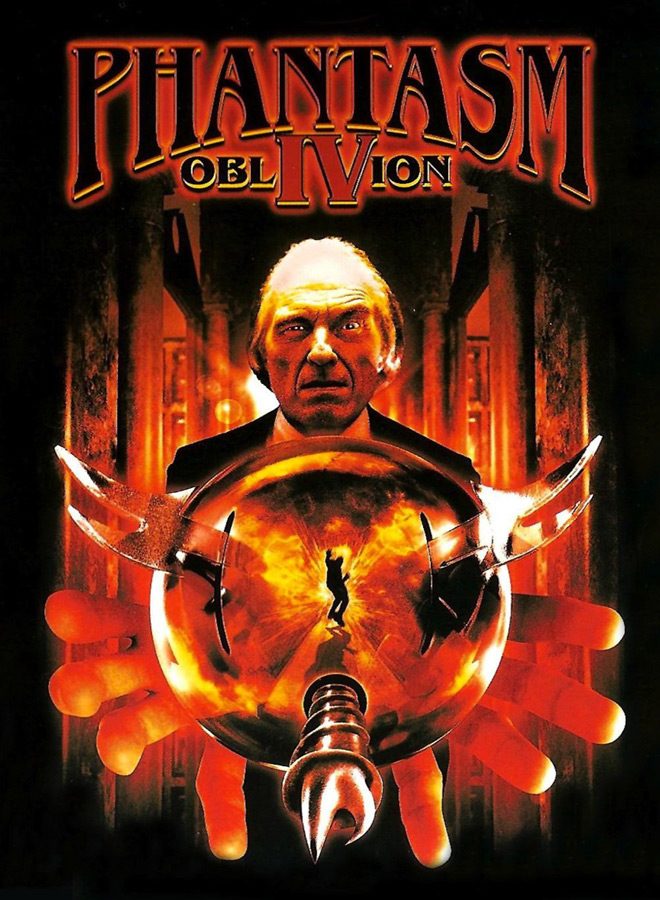