This week in Horror movie history, back on July 13th of 1979, moviegoers from far and wide were feasting on the delectable vampiric treat in the British-American film Dracula. Based on the Gothic Bram Stoker’s novel Dracula, the revamped 1979 film rendition directed by John Badham (Saturday Night Fever 1977, Blue Thunder 1983) was led by Frank Langella (The Ninth Gate 1999, Frost/Nixon 2008) portraying the centuries old Dracula. 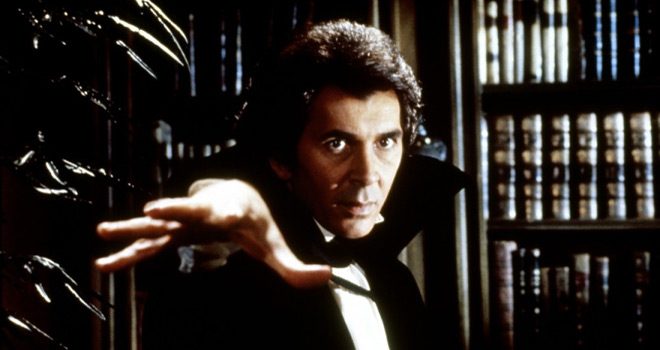 One of many Dracula based films released that year, including Nosferatu the Vampyre and more comical Love at First Bite, like the classic 1931 Universal Pictures film Dracula with Bela Lugosi, Badham’s film would also be based on the screenplay by Hamilton Deane and John L. Balderston. A receipt for more romance than bloodsucking, Dracula won the 1979 Saturn Award for Best Horror Film, an honor given to films such as The Exorcist in 1973 and Poltergeist 1982, making it one of those forgotten gems worth sinking one’s teeth into all the years later.

Set in 1913, the two unsuspecting women who succumb to Dracula’s insatiable blood lust and magnetic charm are Mina Van Helsing (Jan Francis: Secret Army 1977, Just Good Friends 1983) and Lucy Steward (Kate Nelligan: Eye of the Needle 1981, The Prince of Tides 1991). Milo Renfield (Tony Haygarth: A Private Function 1984, Chicken Run 2000) is recruited by Dracula as a personal assistant and is mentally enslaved by the undead’s hypnotic powers.

Those stalwart men hell-bent on ridding the world of Dracula and to ensure that he finally rests in peace with a stake driven in his red-black heart are Prof. Abraham Van Helsing (Laurence Olivier: The Clash of the Titans, 1981, The Bounty, 1984), Dr. Jack Seward (Donald Pleasence: Halloween, 1978, Escape From New York 1981), and Jonathan Harker (Trevor Eve: Troy 2004, She’s Out of  My League 2010).

D-R-A-C-U-L-A. Whenever this seven letter preternatural name is intoned it never fails to invigorate the exhaled molecules of air with an arctic chill. This said, the immemorial legends of Dracula the vampire is ingrained within the dusty and cobwebbed closets of fear in every man, woman, and child. He is what lurks behind the shadows lying in wait for unsuspecting prey who have no other choice than to become an initiate of the undead. Bram Stoker immortalized the tale with undead pen as he described with absolute clarity the horrors that this vampire wrought as he fang-feasted on his human carnage. As stated, numerous Dracula movies adaptations were harvested from 1979 of the supernatural and it could be argued Badham’s version in particular stands out for its unique vampiric portrayals. 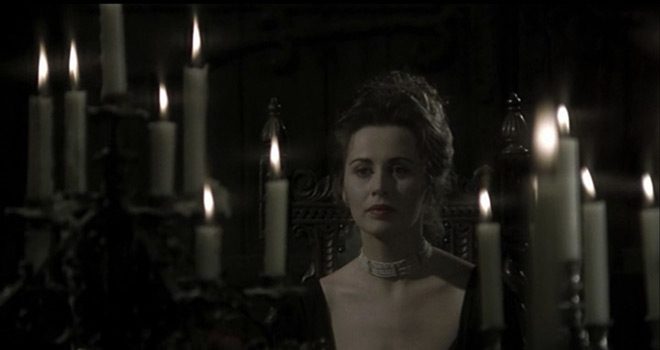 Well-worn pages of Bram Stoker’s narrative fly by until it lands on the page that describes in vivid detail the account of Count Dracula’s fateful arrival to Whitby, England. Little did anyone in that town realize that a demonic creature has reached their shores and was ready to gorge on the crimson liquid that flowed through each and every soul there. The sea was in the midst of a nightmarish storm and the ship, Demeter, was doomed to be mincemeat and torn asunder by the unceasing pummeling of the angry sea on one side and the crew was plucked one by one as if they were juicy plums to satiate the  hunger of one blood thirsty vampire.

Each one experienced a grisly exsanguination. To Dracula, it was good to the last drop! To be sure, heads of onlookers were scratched as if in confusion as they viewed the remains of the shipwreck and pondered the meaning of the word “undead”- and the question that lapped at the door of their consciousness – why the bloody hell would any captain tie himself to the steering wheel with a rosary gripped as if it was a weapon?

Logic would indicate that a storm of this nature would rattle the fearless plunk of a seasoned seaman but this was a tad bit over the top. Once done with his crew course dinner, Dracula morphed into a canine to seek shelter and telepathically sought a suitable female companion who is Mina! This little beauty answered his mesmerizing summons and went into a cave full of night crawlers and took the proffered hand of the supine body before her. Little does she know her Florence Nightingale days were numbered. How could she refuse?

All in all, Dracula is the embodiment of masculine sensuality and Langella made being a ladies man a piece of cake. All he had to do was toss a hypnotic stare in her direction and she was putty in his hand to the chagrin of all the males present. As Dracula drained Mina of her life force, she was rewarded with a red hot passionate interlude in his arms. After Mina’s untimely death and the discovery of the puncture marks on her neck, speculation ran high in the Seward household. 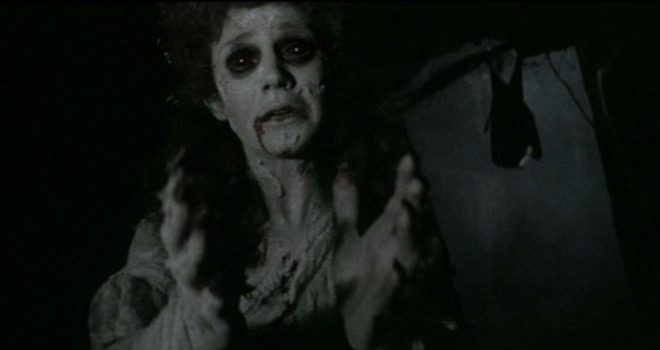 Mina’s grieving father, Professor Van Helsing, stays up to research the probable causes of death and his eyes alight on an illustration of a bat. To be sure, he pondered the implications of the undead coupled with the telltale puncture marks on the neck and realized something supernatural was underfoot. His suspicions confirmed when an infant was found to have died and the identification of the assailant was none other than his daughter. Armed with numerous cloves of garlic and decorated her grave, as he leaves the cemetery he encounters Dracula who states he wishes to pay his respects to the newly deceased.

After some commotion, he observes Dracula racing out of the cemetery as if it was on fire. Hmmm, that set Von Helsing to think. Later that evening he performed a grisly act, he exhumed the empty coffin of his daughter. To his horror, she materializes in front of his eyes and she reaches for him. Luckily for Van Helsing, Dr. Seward stakes the vampire daughter dead in her tracks and the repressed emotional release flowed over him.

Meanwhile, Dracula was wining and dining the fiancé of Jack Harper, Lucy Seward. He had set the mood with numerous candles in his decayed and cobweb filled castles looking as if he was a spider in the midst of stalking his prey who had the misfortune of being caught in his web. As he locked eyes with her he knew that she was his just for the taking. After a steamy and passionate bloodletting interlude, he begins the process of transforming her into a female version of himself. Poor Jack was unable to stop it and Lucy breathlessly accepts her damnation into hell.

The trio, Von Helsing, Dr. Seward, and Jack formed a Three Musketeer vampire posse to save Lucy’s immortal soul and to rid mankind once and for all of the demonic scourge that is Dracula. After the completion of this harrowing deed they realized that there are unexplained things that exist and go bump in the night. The legend of  Dracula has always enthralled those who heard it and Langella left his fang print on the delicate neck of vampire fandom. He is quoted saying, “Each of us needs something -food, liquor, pot, whatever – to help us survive. Dracula needs blood.” 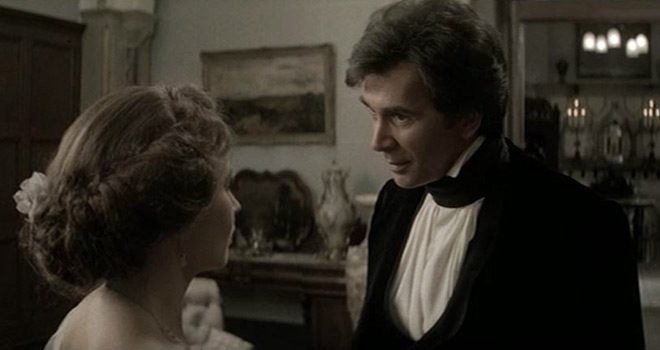 A compelling story, well-acted, many would argue this version of Dracula brought an elegancy and style back to the big screen. While it did gross over 20 million dollars in the USA alone, in the eyes of Universal Studios, it was considered a bit of a disappointment. Even still, the film had an audience, one which continued to grow at the peak of home video rental in the ’80s and ’90s. Speaking of which, it is said that the theatrical running of Dracula looks quite different to more recent released version. In fact, the 1991 re-released on laserdisc saw Badham change the color timing and as a result the vibrant look of the film was desaturated. This leads to much debate by fans which version of the film they prefer, after all, Badham originally intended the film to be presented in black-and-white.

Beyond such, the weight in water of any Dracula film is the lead actor portraying the undead bloodsucker. To many, Langella did a sensational job and the Tony Award winning actor has stated, “I don’t play him as a hair-raising ghoul. He is a nobleman, an elegant man with a very difficult problem… a man with a unique and distinctive social problem: he has to have blood to live and he is immortal.” Like Lugosi, Langella also did not wear fake fangs for the role of Dracula, yet some people have complimented him on them anyway. Amusing enough, Langella’s mesmerizing Dracula had more than a few women hot under the collar.

Overall, Badham’s film portrayed Dracula as a sinister but intensely sensual nightcrawler. Those who have not seen it yet, make sure to sink your teeth into this one on a full moon. Oh, and don’t forget your cloves of garlic and rosary! Dracula is epic in that the women rush to bare their necks for that sensuous fang bite and men wish for the pied piper call that he has so masterfully honed over the centuries. 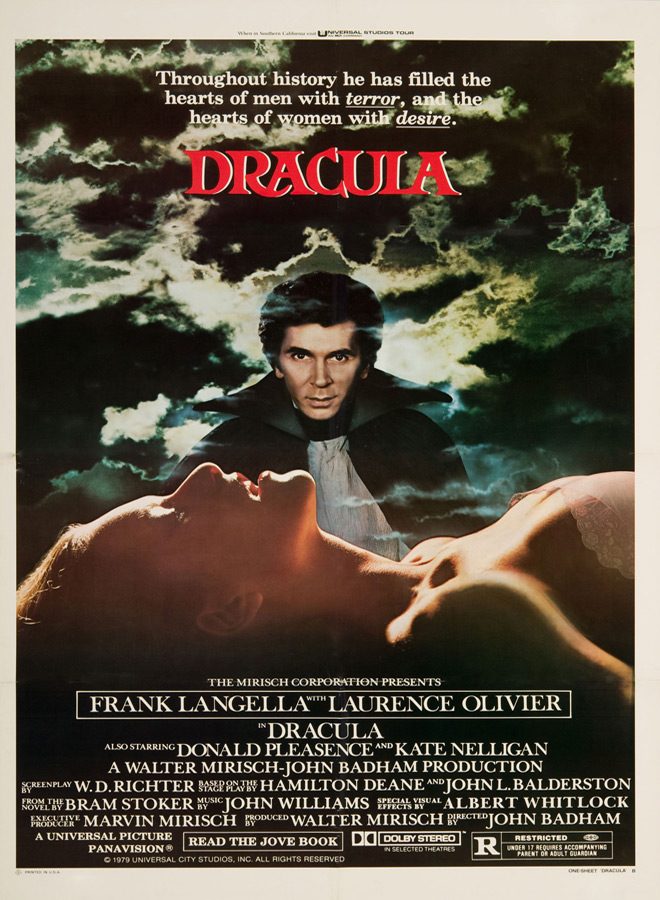