This week in Horror movie history, back on February 6th of 2001, Hannibal made its way into theaters across the land. Adapted from the novel by Thomas Harris, Hannibal reprises Sir Anthony Hopkins’ (Legends of the Fall 1994, The Wolfman 2010) iconic role as the cannibalistic serial killer, Doctor Hannibal Lecter.

A gruesome Thriller and sequel to the 1991 Academy Award-winning Silence of the Lambs, Director Ridley Scott (Alien 1979, producer: The Martian 2015) spent some $87 million on the R-rated film. The novel was noted for its graphic violence as well as gore and, perhaps for this very reason, the film broke box office records in the U.S., Australia, Canada, and the UK. 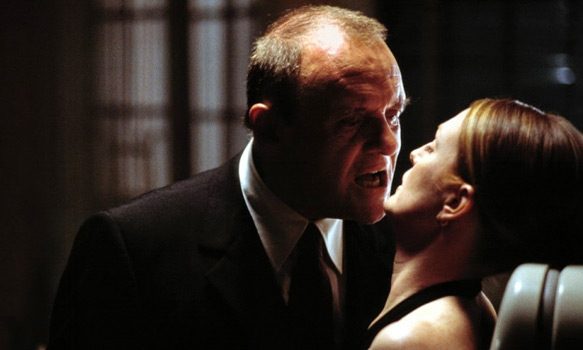 The film stars Hopkins in a reprisal of his now infamous role as Hannibal the cannibal, with Julianne Moore (Boogie Nights 1997, The Hunger Games: Mockingjay 2015) taking over the role of Clarice Starling, which was vacated by Jodie Foster. In fact, when the Thomas Harris novel was published in 1999 – eight years after the original film – Foster, Director Jonathan Demme, and Screenwriter Ted Tally all declined to be involved in the new production.

Riding his recent success with 2000’s Gladiator, Scott would step in as director for the adaptation. Ultimately, Moore was cast to take Foster’s place, while both David Mamet (writer: Glengarry Glen Ross 1992, The Untouchables 1987) and Steven Zaillian (producer: The Girl with the Dragon Tattoo 2011, writer: Schindler’s List 1993) worked on various incarnations of the screenplay.

Set in both Italy and the United States, the film opens up ten years after The Silence of the Lambs, literally. Hannibal Lector’s surviving victim, wealthy child-molester Mason Verger (Gary Oldman: The Dark Knight Rises 2012, the Harry Potter series), has a $3 million bounty out on Lecter. Enter Special FBI Agent Clarice Starling (now played by Moore), who is the key to Verger’s plan of revenge. 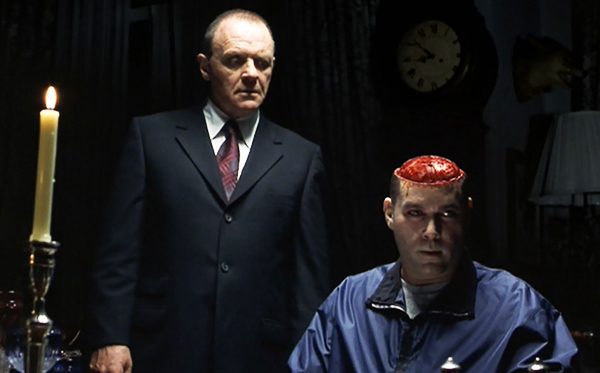 Starling herself has recently faced animosity: blamed for a botched drug raid at work and suffering a career low. Little does she know that her career is about to take an even bigger nose-dive: Verger bribes a Justice Department official, Paul Krendler (Ray Liotta: Sin City: A Dame To Kill For 2014, Goodfellas 1990), to get her suspended from the FBI. In Florence, Lecter is now masquerading as “Dr. Fell,” an assistant curator and caretaker. Predictably, he has been following Starling’s career for the past years, waiting for that moment when the pair can meet again.

The bridge between the U.S. and Florence is Chief Inspector Rinaldo Pazzi – played by Giancarlo Giannini (Quantum of Solace 2008, Casino Royale 2006)- in Italy. Greedy and desiring the $3 million bounty for himself, Pazzi recognizes Dr. Fell from a surveillance tape and discovers that he is, in fact, the one and only Dr. Lecter. To prove that he is correct, Pazzi recruits a pickpocket to obtain Lecter’s fingerprint. Though seriously wounded by the good doctor, the pickpocket is able to obtain that fingerprint and pass it along to Pazzi. Unfortunately for the Italian Inspector, he never collects his millions before he ends up Lecter’s newest victim.

Fresh off his latest kill, Lecter returns to the U.S. to lure Starling into a rendezvous, but predictably ends up a captive at Verger’s estate. What eventually follows is one of modern Horror’s most iconic and gruesome scenes of death via wild boar pit. In a second iconic and horribly hilarious scene, Lecter removes the prefrontal cortex from one of his victims and then forces the man to cannibalize himself. 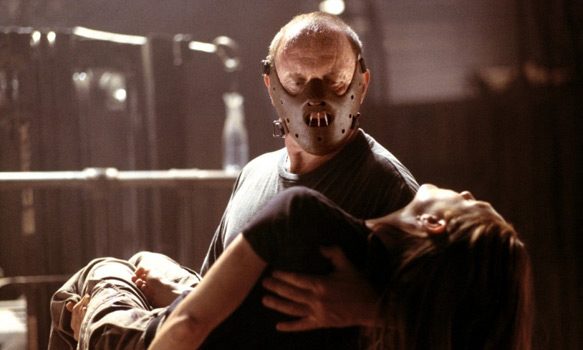 There were obviously mixed reviews of the film – as with the novel – due to its excesses, but the numbers tell a slightly different story. Hannibal grossed $58 million (U.S.) in its opening weekend, which, at that time (February 2001), was the third-biggest debut ever—only 1997’s The Lost World: Jurassic Park and 1999’s Star Wars: Episode I – The Phantom Menace grossed more in an opening weekend.

At the time of its release, it was also the biggest opening box office take for an R-rated film ever. The final U.S. box office gross reached upwards of $165 million with a worldwide gross of over $351 million. The film spent three weeks at No. 1 on the U.S. box office chart, four weeks at No. 1 in the UK, and it was the tenth highest-grossing film of the year worldwide. Following its video release in August 2001, Hannibal would earn an additional $87 million in rentals and sales.

The success of Hannibal was pivotal to future film productions of Thomas Harris’ Lecter series: 2002’s Red Dragon and 2007’s Hannibal Rising. While these latter two films did not fair as well at the box office, Red Dragon certainly did not suffer from lack of stellar casting: it starred the tremendous talents of Hopkins, Edward Norton (The Incredible Hulk 2008, Fight Club 1999) and Ralph Fiennes (The Grand Budapest Hotel 2014, Schindler’s List 1993). Hannibal stands as both the promise of the continuation of The Silence of the Lambs and the beginning of the demise of the Hannibal Lecter lexicon. 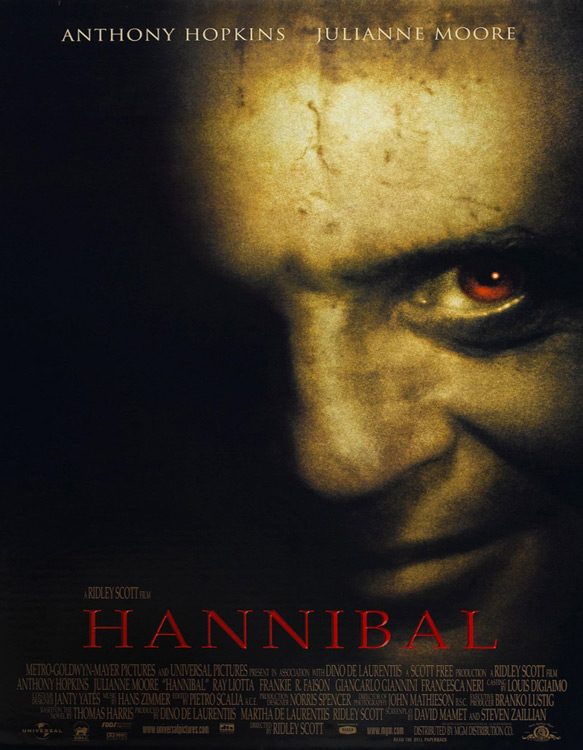