This week in Horror movie history, back on October 18th of 1980, affable farmer Vincent Smith and his jovial sister Ida debuted their secret recipe to the world in Motel Hell. The “masked, blade-wielding maniac” was en vogue during the ’70s and ’80s, but Motel Hell was unlike the Michael Myerses, the Phantom Killers, and the Mrs. Tredonis before it. Somehow Motel Hell managed to escape an apt comparison or tracing of lineage back to any other than Tobe Hooper’s masterpiece of brutality, 1974’s The Texas Chainsaw Massacre, the granddaddy of them all. 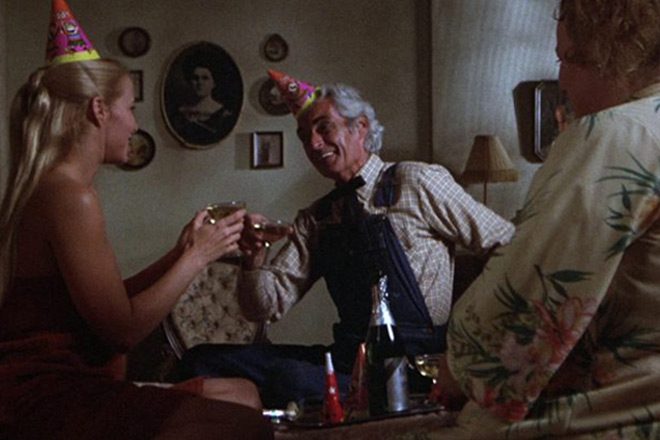 Motel Hell, a grisly, yet oddly appetizing chunk of Americana, was actually directed by Englishman Kevin Connor (From Beyond The Grave 1974, Great Expectations 1989), who, until then, had mostly directed schlocky, Jules Verne-esque, Sci-Fi films. He shot with a visual sophistication honorably resembling the Hammer Film style that, at the time, had taken Britain’s Horror scene by storm. Motel Hell bears this same visual birthmark without the baroque, Victorian aspects so common in Hammer Films productions. It shirked stuffiness in favor of levity; it crammed delightful stupidity and cringe-y, giggly cheese into all of its 101 minutes.

For those who have not checked in at the front desk yet, Motel Hello – with the O burnt out on the neon sign – is about a genteel but simple family of farmer-moteliers. Farmer Vincent Smith – portrayed suavely by Hollywood lothario Rory Calhoun (How To Marry A Millionaire 1953, Night Of The Lepus 1972) – and his sister, Ida, a sort of hillbilly Strega Nona played by Nancy Parsons (Porky’s 1981, Porky’s II: The Next Day 1983), earn extra income by selling their locally-famous and locally-sourced smoked “meats.”

The meat is made from folks, folks! Folks they sabotage off the road, folks they give room and board, folks that drop by any old time. They are given vocal cordectomies, planted in the ground like animatronic cabbages, and fed a hearty diet of cattle feed until they are ripe enough to pluck out by the neck and grind into sausage casings. Side note, one of the victims is played by Mr. John Ratzenberger, portraying the drummer of Ivan and the Terribles, before later in his career going onto to become a star of the hit series Cheers. Interestingly enough, in a volley of reciprocated respect for Connor, Hooper appears to have borrowed the theme of making unwitting cannibals out of the public for 1986’s The Texas Chainsaw Massacre 2. 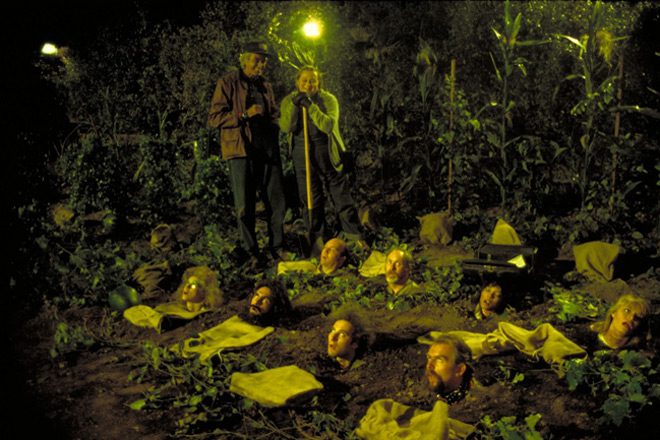 Despite outward appearances, if one were keeping score in Motel Hell, it would be hard to not call Ida the brains of the operation. Vincent is handily capable in farming, butchering, anesthesiology, and acting as the face of the business, which at a glance, would put him ahead. However Ida, on top of farming, butchering, and anesthesiology, apparently has considerable skill in otolaryngology and the culinary arts. While Vincent is impulsive, Ida is nefariously calculating and hides it all under her disarming bumpkin disposition, making both of them dangerously easy to underestimate.

During one of his cannibalistic “crop-gathering” capers, a carefree, little expository vehicle named Terry – portrayed very adroitly by Nina Axelrod (Cobra 1986, Critters 3 1991) – gets injured and is therefore deemed not crop-worthy. Farmer Vincent feels a Christian duty to nurse her back to health and has designs to teach her the “business.” Axelrod shows a convincing range of emotion in her acting, despite being written and developed as the girl voted “most likely to go with the flow” in high school; her ability to take things in stride requires a Herculean suspension of disbelief.

Sheriff Bruce Smith, the doofy but well-intentioned cop brother of Vincent is played by Paul Linke (Parenthood 1989, K-PAX 2001). Linke saunters Sheriff Bruce to the very edge of ludicrous stupidity while keeping him cogent enough to be the linchpin to farmer Vincent’s undoing. True to his pedigree, Sheriff Bruce is perpetually underestimated and eventually bumbles his way into defeating his—literally—pig-headed brother in a chainsaw match to the death, yet another thing Hooper put in his chest pocket for The Texas Chainsaw Massacre 2. 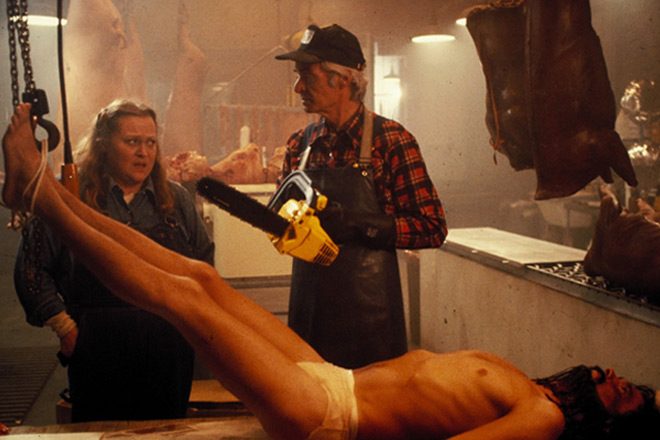 Despite some of its unbelievable yet charming flaws, Motel Hell’s writing is inventive, over-the-top, and original, even by today’s standards. It pokes fun at all enclaves of society: it lampoons such ’70s archetypes as hippies, bikers, holy rollers, metalheads, perverts, squares, femme fatales, police, and most glaringly, hillbillies. No one escapes. In today’s age of officious political correctness, it is invigorating to revisit our society when it could still take a joke.

Little did the public know, Motel Hell was a big budget affair for its time. Adjusted for inflation to October 1980, the budget for Hooper’s The Texas Chainsaw Massacre was nearly $500,000, which sounds like a lot for the simpler 1974 economy. However, when placed next to the colossal budget of $3,000,000 that Motel Hell boasted, it is a wonder how Motel Hell only managed to double its production cost in ticket sales, while The Texas Chainsaw Massacre‘s box office numbers recouped its production cost 100-fold. This is a testament to the power of marketing.

In its early stages, Hooper was tapped to direct Motel Hell but when Universal Studios passed on it, Hooper followed suit. If Motel Hell had even half of the marketing power that was put behind The Texas Chainsaw Massacre, the tapestry of Horror as we know it might not have been the same. Halloween stores’ displays might have featured Motel Hell-branded pig masks directly adjacent to its Leatherface, Freddy Krueger, and Jason Voorhees masks. Instead, the studio opted to market it as a pure Horror film and glossed over its comedic aspects in a tragic publicity misstep that arguably cost Motel Hell a more profound icon-hood. 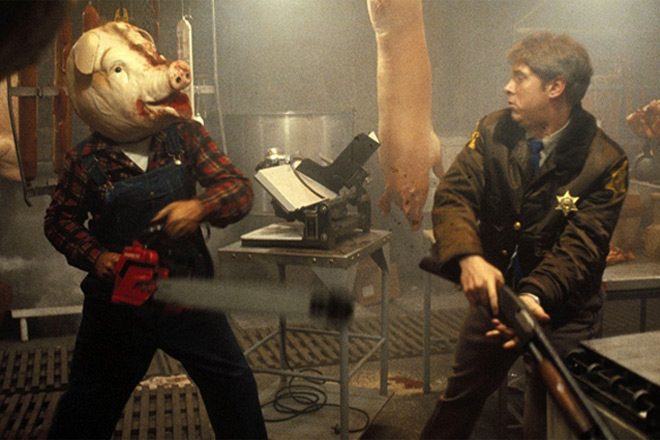 This kind of cheesy, cornball trash does not exist anymore: the exciting and unpredictable era of practical gore effects has given way to a scourge of tired, digital blood sprays. The chainsaw battles are now done in post-production to cut costs; the pig masks today would be rotoscoped dots on Calhoun’s face. The genre is currently saturated with direct-to-video Horror films that may superficially scratch your terror itch, but in order to get one of those deep, nagging itches, one has to travel back into these mid-late ’70s/early ’80s days when an on-screen killing had to be expertly planned and timed. The science and labor behind Horror has faded, but Motel Hell preserves it like smoked and cured people-sausages on its everlasting celluloid. 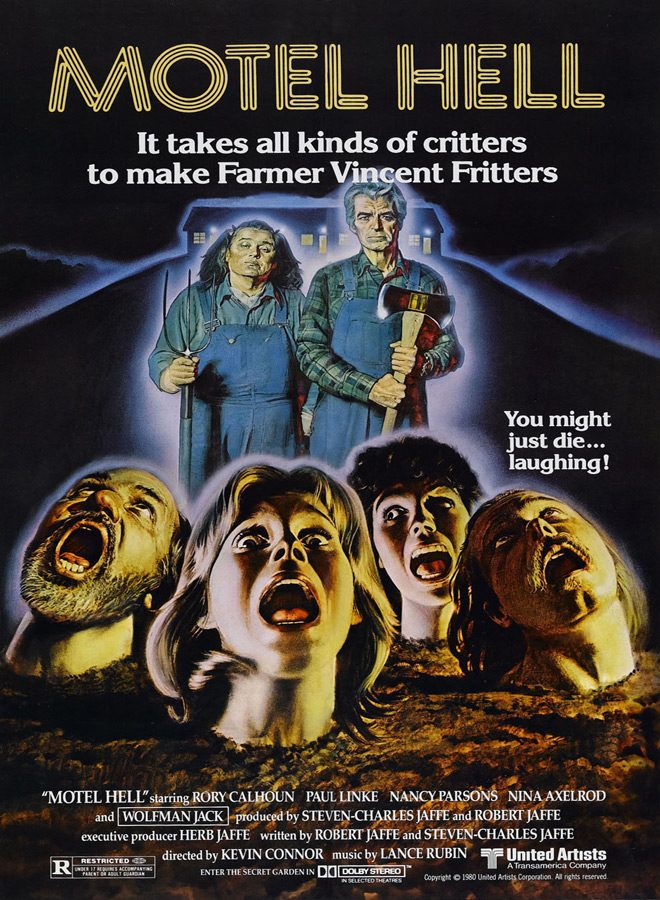