This Week In Horror Movie History – Return to Horror High (1987)

This week in Horror movie history, back on January 9th of 1987, Return to Horror High made a limited theatrical release in the USA. Put out during the peak of the Horror film craze during the 1980s, it was also one of the main genre films offered up by the now defunct New World Pictures. The directorial debut from Bill Froelich, who would go on to produce and write for the popular television series MacGyver as well as Freddy’s Nightmares, Return to Horror High is one of those often forgotten Horror flicks worth sifting through a going out of business video rental shop bargain bin for. 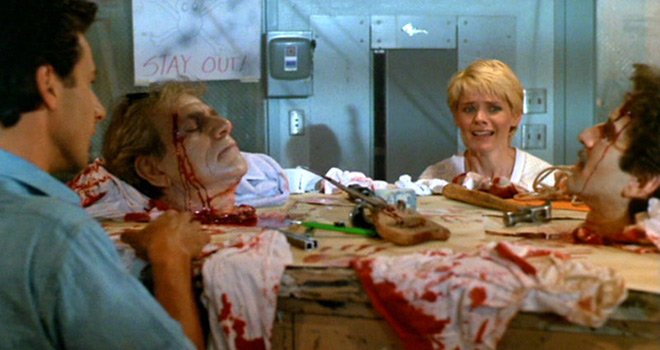 Not a sequel to 1973’s Horror High, Return to Horror High opens with a little background simply in the form of words on the screen stating, “In 1982, the southern California town of Crippen was rocked by a series of murders at Crippen High School. The killer was never caught,” it lays the groundwork for what is to come. What might that be? Well, a little low budget film production company called Cosmic Pictures, headed by Producer Harry Sleerik (Alex Rocco: The Godfather 1972, The Wedding Planner 2001), a sleazeball who will do anything to get fannies in the seats. He and a film crew enter into the now abandon Crippen High School to make a movie about the murders. Little does anyone involved know is that a killer is on the loose somewhere in the halls of the once vibrant high school, knocking off cast and crew at will.

A plot that seems simple enough, in truth, it is not as easy to follow as it may seem. Much of the film’s story is told in a nonlinear narrative style that goes back and forth between the film crew, the film-within-a-film being shot, and the police investigating the new murders taken place on the grounds of the now closed down high school. Many times it is hard to tell what is presently happening or what happened in the past, creating a confusing timeline to follow. Although, if you can get past the time jumps, or even follow it, Return to Horror High is quite entertaining on various levels. 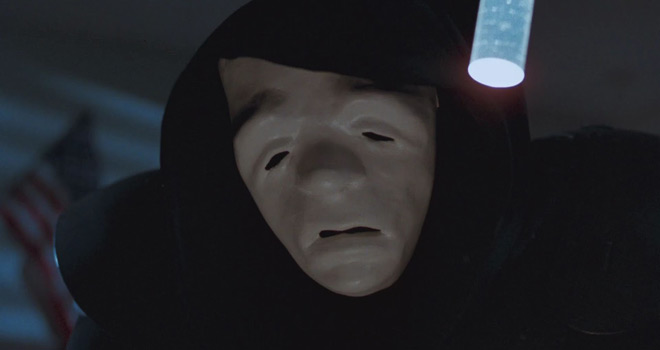 For one, Return to Horror High does not take itself too seriously, making it a perfect addition to the Horror Comedy family. There are many scenes where you cannot help but laugh, even 30 years later when what is considered socially acceptable or even fair game to poke fun of is completely different. There is also an element of spoof surrounding the entire whole story. Froelich wanted to create a film that clearly pokes fun of the whole Slasher genre. If that is not exactly what he was going for, well, then he created one of the first Horror movies to joke about the cliches of Horror films. Yes, that is right, before Wes Craven’s 1996 box office mega hit Scream, Return to Horror High was paving the way nearly a decade earlier.

It has the ‘whodunit’ question floating around, a low budget film crew looking to create a typical sleazy, gore fest with plenty boobies for ‘effect,’ but most of all, there is commentary amidst it all about paint by number Horror movie stunts genre filmmakers pulled during the 1980s. Return to Horror High begged to be different than the rest, and if that is not enough, perhaps an appearance by George Clooney will sweeten the pot. That is right, Hollywood megastar, who has since won a laundry list of awards, made his feature debut in Return to Horror High. Playing an actor named Oliver, cast to play a cop in the film-within-the-film, ironically is called off set for a bigger opportunity elsewhere. Leaving the cast and crew in the dust, unfortunately Clooney’s character does not get very far, being the first to be snuffed out by the killer with the squeaky mop bucket. 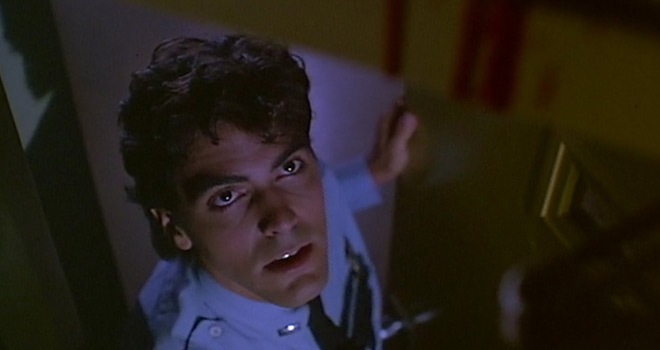 Additionally, Return to Horror High’s cast includes ’80s Horror movie queen Lori Lethin (Bloody Birthday 1981, The Day After 1983) portraying Callie Cassidy, Sarah Walker, and Susan. Afterall, in a low budget movie one actor may have to play several roles, as Return to Horror High alludes to itself. Then there is Scott Jacoby (That Certain Summer 1972, The Little Girl Who Lives Down the Lane 1976) portraying the film director who simply wants to make a decent flick. Joining him is Richard Brestoff (The Entity 1982, The Man with Two Brains 1983) playing screenplay writer Arthur Lyman Kastleman, whose script is being slashed at every turn, pun intended. Also, not to be forgotten, there is also The Brady Bunch‘s Marcia Brady, Maureen McCormick, as Office Tyler, who strangely seems to be aroused by blood.

A cast of easily recognized faces, Return to Horror High oozes fun. In fact, it looks like everyone involved had fun judging by their performance on screen. Imagine getting together with colleagues to do a gig for fun, playing it light and loose, that is Return to Horror High. Interestingly enough, some of the cast in Return to Horror High are connected by six degrees of separation including Alex Rocco, Scott Jacoby, and George Clooney, who had all appeared separately on episodes of The Golden Girls. Too bad they could not incorporate Dorothy, Rose, Blanche, and Sophia into the story of Return of Horror High. 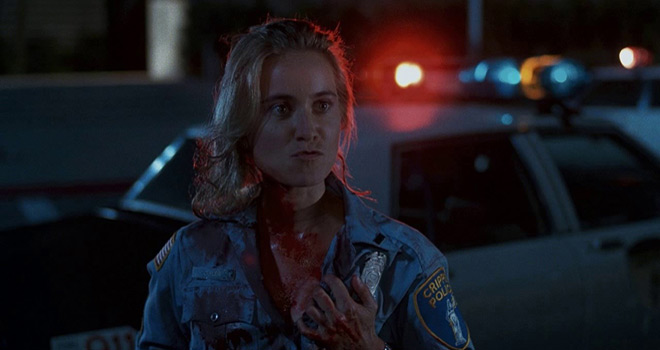 Grossing a bit over 1 million dollars after appearing in a little over 220 movie theaters in 1987, Return to Horror High lived on as a VHS rental. As for the kids, who cannot forget seeing the infamous skeleton cheerleader artwork displayed on Horror movie-themed prism sticker vending machines in the 1980s? Ah, the good old days. Helping keep those good memories alive, Return to Horror High did find its way to DVD in 2002 thanks to Anchor Bay Entertainment, but has yet to make it to Blu-ray in the North American market.

So, anyone looking to revisit some classic ’80s Horror, or just get a little history lesson on how a quality Horror Comedy is made, check out Return to Horror High today. Class dismissed! 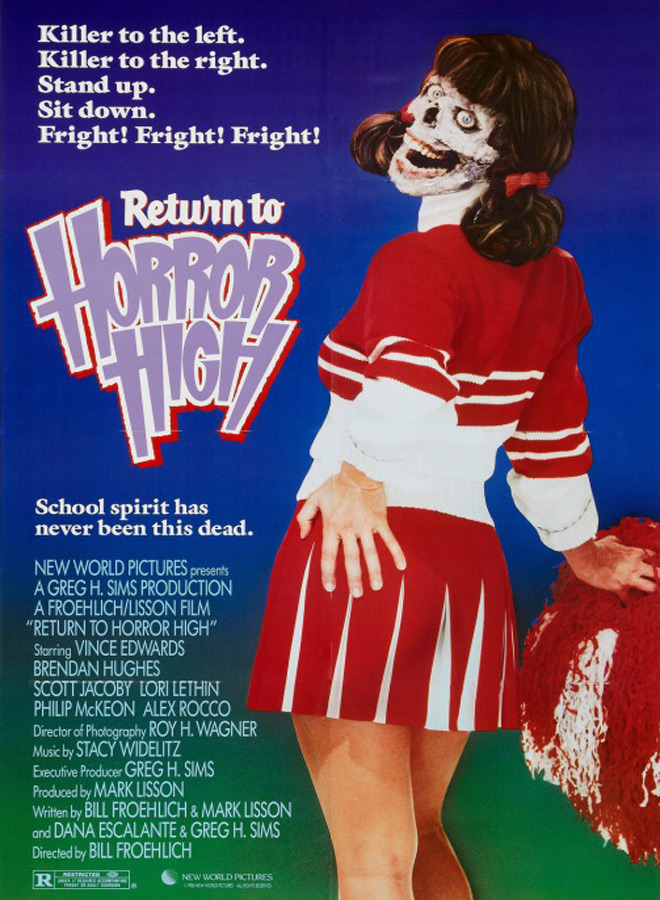