This week in Horror movie history, back in 1988, the dead were rising from the graves again in Return of the Living Dead Part II. Advertised as a sequel to the 1985 cult classic The Return of the Living Dead, this time around, Ken Wiederhorn took on the project as writer/director. Looking to capture the magic of the first film that revolved around a group of punks fighting against brain-eating zombies, reactions to Return of the Living Dead Part II were quite panned. Premiering on January 8th of 1988, a week later, on the 15th, the film was released in an estimated 1,467 theaters across the nation, up against other Comedies such as For Keeps and Couch Trip. 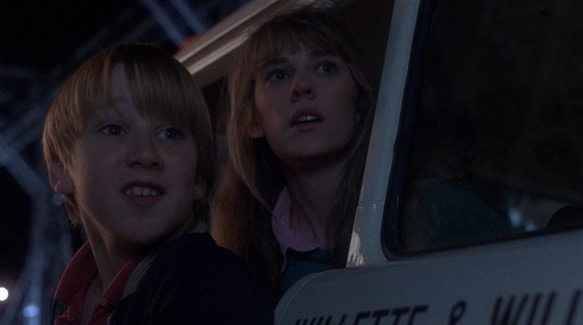 Picking up with a soldier transporting one of those infamous gas bearing canisters through a rainstorm, naturally, it accidentally rolls off of an army truck, only to end up in an old cemetery near a new housing development. From here, a group of boys from the housing complex; Billy (Thor Van Lingen: debut), Johnny (Jason Hogan: debut), and Jesse Wilson (Michael Kenworthy: Just the Ten of Us TV series, The Blob 1988), discover the canister in a storm drain. Apprehensive, Jesse wants no part of it, but the bullying Billy and Johnny carelessly bust the thing open and of course the gases are released along with a sluggy zombie similar to The Return of the Living Dead’s Tarman.

From here, hell breaks loose as the gases make their way to the nearby cemetery where grave robbers Joey and Ed are cutting jewelry off corpses in a mausoleum, all while Joey’s girlfriend Brenda (Suzanne Snyder: Weird Science 1985, Killer Klowns from Outer Space 1988) waits in the car. With the vapors loose, the rain soon follows and the chemicals penetrate the soil, resulting in a grand re-awakening of the rotting dead who are ready to party and nosh on some nice, juicy brains. 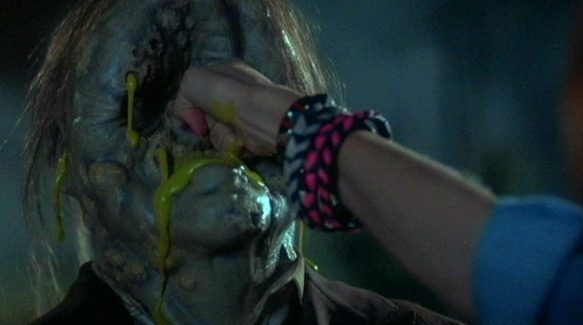 The first thing any purist would notice with Return of the Living Dead Part II is the inconsistencies in the plot. In The Return of the Living Dead the film concludes with the mass bombing of Louisville, Kentucky, but Return of the Living Dead Part II’s location is undisclosed. This leaves you to wonder are the events of the second film at all supposed to be tied to the first? Furthermore, the first film’s beloved characters of Frank and Freddy perished, but then James Karen (Poltergeist 1982, The Pursuit of Happyness 2006) and Thom Mathews (Friday the 13th Part VI: Jason Lives 1986, Bloodmatch 1991) were asked to return for the second film to portray new characters.

A bit confusing, since most people associated Karen’s and Mathews’ faces with the the deceased character in the first film, there is no doubt the addition of the talented actors in the second film worked wonderfully regardless. Similar to their characters in the first film, Karen and Mathews’ chemistry is quite evident and gave fans of the original film a comfort zone to dig into the new story. Also, the unforgettable lines of Karen saying, “Watch your tongue, boy, if you like this job!” to which Matthews reacts, “Like this job?,” are indeed recycled in a fitting fashion. When asked about being recast, Karen told CrypticRock, “They just liked our characters, the money came from Japan for the second one. They insisted on Tommy and I being used as the leads despite the fact that we were dead, we just ignored it and went ahead. The second picture has a lot of good things in it and is not equal to the first either, I don’t think. It has a lot of good things in it.“ 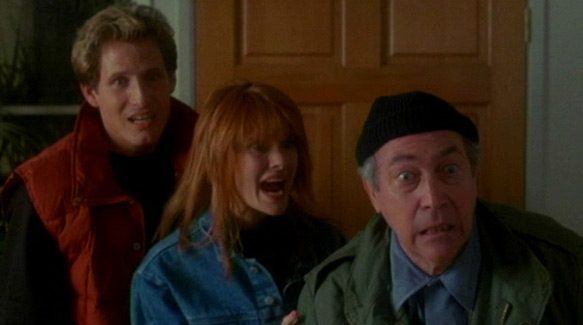 Giving fans more gifts throughout Return of the Living Dead Part II, the character of Jesse and his sister Lucy (Marsha Dietlein: Little Children 2006, Newlyweds 2011), both bare the last name Wilson, leading some to believe they were related to warehouse owner Burt Wilson (Clu Gulager: The Tall Man series, A Nightmare on Elm Street 2: Freddy’s Revenge 1985). The connections do not stop there, as the new Tarman is reprised by Allan Trautman, and Brian Peck, who portrayed Scuz in the first film, returns as a Zombie, not once, but five times in Return of the Living Dead Part II – ‘Pussface’ Zombie, ‘Thriller’ Zombie, ‘Jaw’ Zombie, ‘Eye-Pop’ Zombie, and ‘Zombie on Car Roof.’

Further connecting itself to the original film, Return of the Living Dead Part II’s zombies are equally as humorous, but amp it up a few notches by running around and yelling “Brains” nearly the entire film. Additionally, there were some amusing, memorable lines from the zombies including the personable severed head saying, “Get that damn screwdriver out of my head!” and another zombie responding to Doc Mandel’s (Philip Bruns: Mary Hartman, Mary Hartman 1976, Flashdance 1983) question of who the President of the United States is, by saying, “Harry Truman.” Hmmm, better brush up on that history, it is supposed be around 1988, then again, in the zombie’s defense he was last breathing when Truman was in office over three decades earlier.

Misleading, the original theatrical trailer of Return of the Living Dead Part II led audiences to believe the film would be much darker than it was. In fact, it is said the the MPAA was set to grant the film a PG-13 rating, if not for one explicit scene at the hospital where the zombie is shot in half. Thankfully, Wiederhorn and his team did not tone down the scene, hence giving the film a R rating, and rightfully so, because Return of the Living Dead Part II actually delivers pretty heavy on the gore, but perhaps someone at the MPAA glazed over it due to the heavy comedy surrounding it all.

Now back to the original question – is Return of the Living Dead Part II chronological to the first film? Interestingly enough, the story written by Widerhorn was actually not intended to be a sequel at all to The Return of the Living Dead. Moving forward, Widerhorn struck the interest of Producer Tom Fox. That in mind allegedly Fox would only finance the story if Widerhorn agreed to make it a part of the series. Clearly wanting to have his film made, Widerhorn agreed, and the rest is history. Also, little tidbit of information, Widerhorn had worked on Horror films in the past, including 1977’s Shock Waves and 1981’s Eyes of a Stranger, but it is said he himself is not actually a fan of the genre. Go figure. 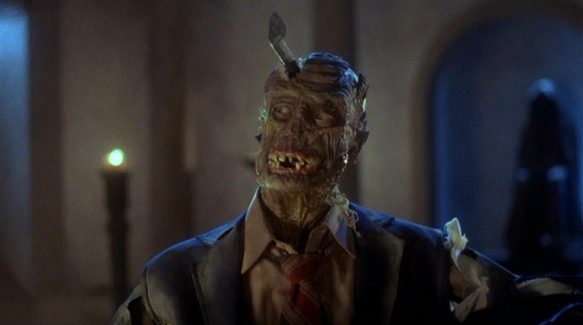 Helping, the cast of Return of the Living Dead Part II are all memorable. They their own identity and likeable qualities – separate from the motley crew of The Return of the Living Dead. Kenworthy’s portrayal of Jesse Wilson is enthusiastic and fun, while Dana Ashbrook’s (Waxwork 1988, Twin Peaks TV series) portrayal of Tom Essex, cable guy turned unlikely hero, is endearing. In fact you cannot help but cheer for Ashbrook’s Essex when he finally gets the chick when Jesse’s sister Lucy (Marsha Dietlein: Little Children 2006, Newlyweds 2011) admits an attraction to him. Go Tom!

Overall a moderate box office success, Return of the Living Dead Part II, standing alone, is a fun Horror Comedy. Full of memorable lines, memorable zombies, and non-stop action, they just do not make Horror Comedies like this anymore. 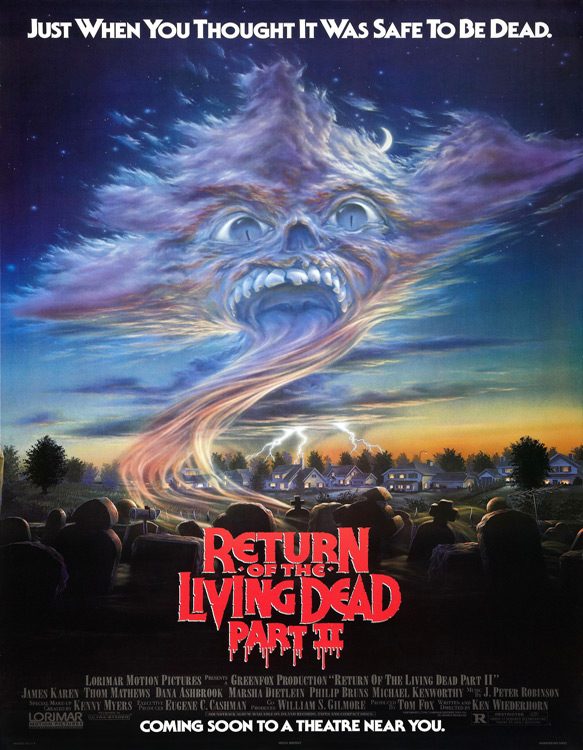