What Lies Beneath Creeping to The Surface 15 Years Later

July 29, 2015 What Lies Beneath Creeping to The Surface 15 Years Later

“She’s dead,” screams Claire Spencer. “Who’s dead,” Norman Spencer asks confounded. “You know damn well who’s dead,” answers Claire Spencer hysterically in Horror/Thriller What Lies Beneath, which celebrated its fifteenth anniversary on July 21st. Released by DreamsWorks Pictures and ImageMovers’ first, the film was directed by Robert Zemeckis (Back to the Future series, Forrest Gump 1994) and produced by Zemeckis, Steve Starkey (Noises Off 1992, Real Steel 2011), and Jack Rapke (The Polar Express 2004, Flight 2012) from a script by Clark Gregg (Choke 2008, Trust Me 2013).  Released in a Summer where Horror films were scarce, and the only other genre film of the season came a few weeks later with Hollow Man, What Lies Beneath made an impact on moviegoers everywhere. 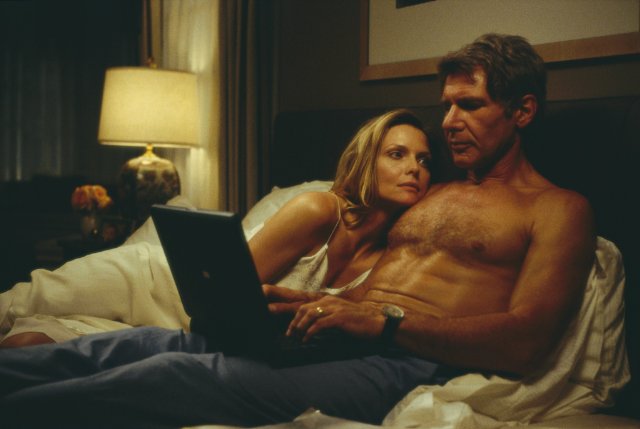 The story follows Claire Spencer (Michelle Pfeiffer: Scarface 1983, Dangerous Minds 1995) and husband, Dr. Norman Spencer (Harrison Ford: Star Wars 1977, Indiana Jones series) living in Norman’s deceased father’s home a year after a car accident that has impaired Claire, next to the Feurs, a temperamental couple. Coupled with the stress of their only daughter going off to college and Claire thinking she sees Mr. Feur (James Remar: The Warriors 1979, Tales from the Darkside: The Movie 1990) carrying what looked like a body, she starts suspecting. Can she convince Norman to believe what she sees and nab Mr. Feur, or is there something more sinister afoot? Amber Valletta (Hitch 2005, Dead Silence 2007) plays Madison Elizabeth Frank, a pupil from Norman’s past.

Delving into What Lies Beneath, the settings are a muted color palette, giving each set piece a sinister, dead feel with a majority of the film’s plot taking place in the Spencers’ house at night in mid to close-range shots for a claustrophobic feel from the opening shot of Claire on her back underwater in the tub and especially the end sequence. Ford’s Norman, with his deep voice and “forced” eye contact gives a sense of an intelligent man perhaps with Asperger’s Syndrome at first, and everybody knows a neighbor like Pfeiffer’s Claire, the barely holding on to her sanity from some trauma while coping with the loss of her daughter to college life, Empty Nest Syndrome, and revelations of something she felt, but could not put her finger on, and never saw coming…with a penchant for snooping in things she really ought not to, even if her heart’s in the right place. 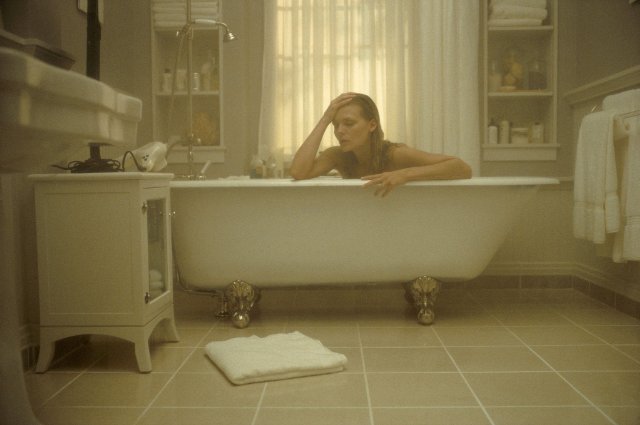 On the other hand, the Feurs (Miranda Otto: The Lord of the Rings: The Two Towers 2002, War of the Worlds 2005), and the aforementioned Remar, are the typical neighbors, they fight, albeit loudly, but everybody does once in a while, which feeds Claire’s curiosity. This might seem ho-hum to today’s audience in the wake of “reality” TV and people recording every little thing on their phones to put on social media age, while Amber Valletta, in only her second role, is intriguing, mysterious, and creepy as the past that never dies. There is little musical score to give the viewer emotional direction, emotion is mostly ambiance and visual/reactionary, but what little Alan Silvestri (The Amazing Dobermans 1976, Back to the Future 1985) did, is effective in evoking dread.

What Lies Beneath was a side project for Zemeckis, which some critics argued that the film was just a filler film and suffered for it since Zemeckis was waiting for Tom Hanks to lose weight for that Winter’s big hit, Cast Away. It was originally from a treatment script from Documentarian, Sarah Kernochan (9 ½ Weeks 1986, Learning to Drive 2013) with Zemeckis wanting the look and feel of Alfred Hitchcock since Pfeiffer was a blond, a Hitchcock trademark, and with shades specifically of 1954’s Rear Window and 1960’s Psycho, among others. Zemeckis’ only choices for the roles of Norman and Claire were Ford along with Pfeiffer, and Pfeiffer originally did not want to do the role, because of the film’s complexities to shoot. Interestingly enough, the Spencer’s house was actually a soundstage set since the house built for daytime interiors and exteriors had to be torn down after filming, because of city codes. In addition, there were five different versions of the bathroom set for different reasons for wherever they were filming, on location or sound stage. Overall working effectively, from the film’s inception; consequently, Zemeckis’ choices were spot on as What Lies Beneath came away with an estimated $291.4 million internationally on an approximately $100 million budget, and earning awards for Blockbuster Entertainment Awards’ Favorite Suspense Actor and Actress for Ford and Pfeiffer regardless of the mixed reviews the film received upon release. 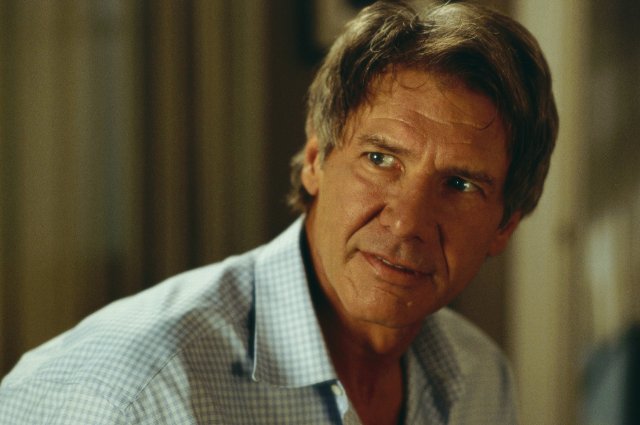 Of course, the film was given props being spoofed the following year in Scary Movie 2, in which Cindy seduces the professor in the kitchen, then, Ray suddenly appears in the same dress. There is a deleted scene where Cindy has to save herself from drowning like Claire had to with hilarious results. Also, in 2002, What Lies Beneath was remade in India, under the name Secret. Needless to say, there has always been something about the supernatural that has intrigued and feared people throughout the ages. Whether it be curiosity and fear of the unknown or wanting to get in touch with someone, who has “crossed over.” What Lies Beneath delves into both issues as well as fidelity, age-old issues that will continue to be relevant until we find out what lies beneath the human psyche. 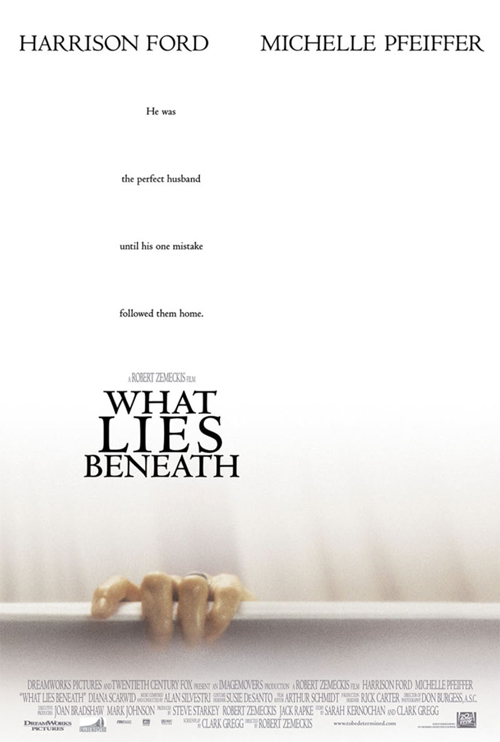 Purchase What Lies Beneath on DVD on Amazon