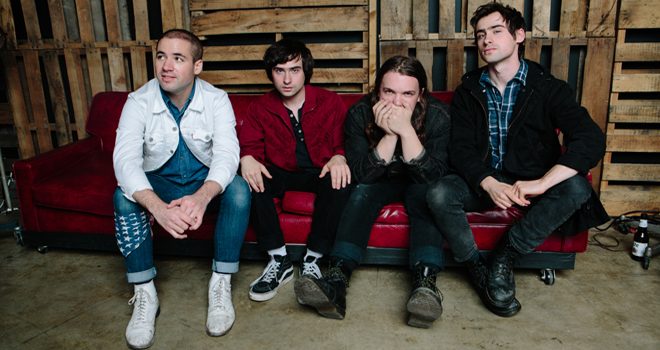 What exactly makes one The World’s Best American Band? Could it be the slickness in the jam of a guitar? Or perhaps it is a lyrical expression that is wholehearted and true? How about an attitude of “We are simply the effin’ best and that is final!” These all seem to be ingredients for a five-star spread for a band from the trenches of Louisville, Kentucky going by the name White Reaper. In fact, they have sparked enough curiosity in all their listeners, stamping themselves with the tag as the World’s Best American Band. With their new record to be released April 7th, 2017 via Polyvinyl Records, titled just that, The World’s Best American Band, White Reaper is talking the talk and walking the walk all over the rocks and rolls.

The troop of four consists of Tony Esposito (vocals and guitar), Ryan Hater (keys), Nick Wilkerson (drums),and Sam Wilkerson (bass). After signing to Polyvinyl in early 2014, and releasing a self-titled 6-track EP, the band soon followed with their debut album, White Reaper Does It Again, in 2015. Thundering sounds under similar clouds of bands like Japanroids and Black Lips, their biggest slam to date includes “Make Me Wanna Die” with over half a million hits on Spotify. They have also had their fair share on the road touring all over the country with bands like Deerhoof, Young Widows, and Priests. Not to mention, their hard slams earned them the attention from a monster name such as Green Day’s Billie Joe Armstrong, who said White Reaper is currently one his favorite bands to listen to. Damn, what a win!

Clinging on to fibers from acts such as Van Halen, Bruce Springsteen, and Blondie, White Reaper shed a layer of their punky Psychedelic Rock persona for this record, just a layer compared to their previous album. They step into more of an ’80s Rock swagger skin, with more keyboards to complement in this one. In a way, the record acts like a time machine to an ’80s high school movie; the type of movie where the kids are all waiting for the bell to ring to let summer welcome the fun times.

The first release off the new album is “Judy French,” a Power Pop tune with cheesy love lyrics and feel good vibes across the board. Their second official release from the record is “Little Silver Cross,” a music video recorded live at Lalaland Studios. This song may very well be the lungs to the title White Reaper claimed because the guitar riffs of this song unquestionably percolate the mind and it is euphoric and nostalgic all at once.

Amps are then cranked to the highest summit in songs like “The Stack” and “Another Day,” getting that sliver of Punk back in the groove. The party continues (kind of like the one in 1984’s Sixteen Candles right before the geeks knock over the beers) in the energetic and just plain peppy song “The Party Next Door.” With ten tracks in total, including standout “Tell Me,” from beginning to end, Esposito’s vocals are shrilly and sweet. In fact, with a whole lot of throat and emotion, the boy can truly give out a good scream.

Lastly, they open the album with a song titled “The World’s Best American Band” where the bands sings “Rally up and dress to kill / Lace your boots and crush your pills / Run around and tell the gang” and ta-da, the world has its answer in a nutshell on what it means to be the best.

Overall, The World’s Best American Band is a youthful yet confident album. The approach of affirming yourself in order for the world to love you back is a great one, because then people start to believe it. Just dress the part, show up, and give it your all. Proving White Reaper have a good idea of what they are doing, go check out YouTube to see the comments being posted on their videos. In addition to all the hype, the sound of their new album is second to none – full of texture, and a live vibe, it is fitting for ’70s Arena Rock. All in all, White Reaper are the definition of positivity and have a sound that solidify why many are saying they are the next best thing. For all these reasons, CrypticRock gives The World’s Best American Band 4 out of 5 stars. 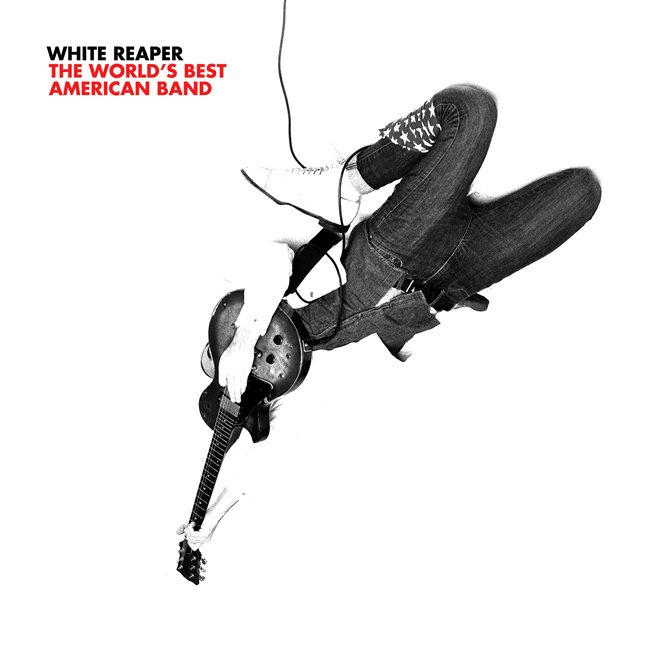 Motörhead: The Rise of the Loudest Band in the World (Graphic Novel Review) Badflower – This Is How The World Ends (Album Review)
Like the in-depth, diverse coverage of Cryptic Rock? Help us in support to keep the magazine going strong for years to come with a small donation.