What would become one of the most loved English bands among enthusiasts of New Wave music, especially in the Philippines, was forming in Liverpool, England, in 1982. In a few months’ time, it would release its first single, which would become legendary and hard-to-find in the decades to come. This would be made possible in large part by Echo & the Bunnymen’s drummer, who decided to finance and produce it, as well as actually play the drums on it. Many would eventually regard the song as a gold nugget of Post-Punk music. Sadly, the band would fail to secure a proper record deal, at least in their first attempt. Compounded by the impoverished circumstances surrounding the members of the band at the time, they would soon split up.

The vocalist would collaborate with another artist and release a number of future classic singles. The guitarist would follow suit, forming his own group and coming up with their own masterpiece. As fate would have it, both bands would be short-lived, each lasting only a couple of years.

Then, in 1986, armed with a new sense of hope, the vocalist, the guitarist, and the bass player would reconvene and re-form their band. Their new demos would land on the desk of a label manager at Sire Records, who would consequently sign them up. Two years after, in 1988, their album would be born—a gem that would be hailed as a holy grail of New Wave music.

Cohesive, almost conceptual, comprised by guitar-oriented songs that were oozing with liveliness, idealism, catchiness, and romanticism but also with hints of gloom and despondence, the album opened with an upbeat, youthful vibe that reverberated an imagery of the band members’ frolicking amidst carefree confetti. The first track, “Young Manhood,” immediately set the band’s style and mood—jangly, atmospheric, energetic, yet lyrically sentimental.

Next was the graceful sparkle and sheen of “Bible Dreams,” which might conjure a scenery of a European countryside on a calming background of sparse, snow-capped mountains. After all, it was inspired by the band’s visit to Lausanne, Switzerland, in late 1986, when they needed to broaden their horizons and fanbase. At this point, the vocalist’s baritone was already beginning to surf into the ears of the listener as if it was a chilling Winter breeze, whereas the guitar, for its part, was shimmering into his heart like the warm embrace of Summer’s nether gales; and both these were complemented by the well-knit foundation of the drums and the bass.

Another feel-good, life-affirming track ensued in the form of “Bitterness” which, despite its tendency to whiff an air of negativity, was actually telling the listener that “When times were hard, the good things came / Forget about the bitterness of life.” Then there was the adoring “Archangels,” in which the deeply resonating voice reverberated and soared in synchronicity with the fluttering and glistening guitar melodies, serving as wings to the confident vocal trajectory. Such astounding sonic plumage!

Paying homage to their birthland, the band then launched into the romantic, half-hopeful, half-yearning “Northern England,” which captured the plight of that part of the country in the members’ youthful days. As the wintry voice sang, “Days braving the wild winds….” After this followed the album’s highlights—the seemingly twin tracks, “Whirlpool Heart” and “Bringing Home the Ashes”—the fruits of the vocalist’s three-chord seeds that the guitarist built up on with his arpeggios and ’60s Surf–inspired guitar styling. New Romanticism at its best!

Another energetic track came galloping next in the form of “Mythical Beast”—lyrically nostalgic and sonically cathartic. The penultimate track, “Now and Forever” signified the end of the homecoming, with its slightly subdued tempo but whose rhythm remained jangly and pristine.

Finally, the trio wrapped up their wondrous album with a rather grim Post-Punk ballad, “The Worst Year of My Life.” No teardrop would be left in any dreamer’s eyes, yet a bittersweet heartache he would gladly embrace, hoping that afterwards there would be a lighthouse by the sea of tranquility, casting its soft brightness to illuminate our yearning hearts.

They were The Wild Swans: Paul Simpson (vocals, guitar), Jeremy Kelly (guitar), and Joseph Fearon (bass). The label manager who gave them a record deal was Seymour Stein of Sire Records. The one and only album together of the trio as The Wild Swans was called Bringing Home the Ashes, which turns 30 in 2018. Listen to it, if you haven’t yet; again and again, if you already did. Let it awaken your revolutionary spirit. Go and rediscover its immaculate beauty, which, according to Kelly, “was a sonic reflection of Liverpool in the 1980s—impoverished materialistically but rich in creativity.” This was a bittersweet tension that The Wild Swans were able to capture and tame in Bringing Home the Ashes with crystalline clarity and in full grace and glory.

Goodbye, King of Sorrow! It has been thirty years. Hello, flowers of love. Let your melting blue petals comfort our restless minds. The heart in the heart of England will never die. Amen. 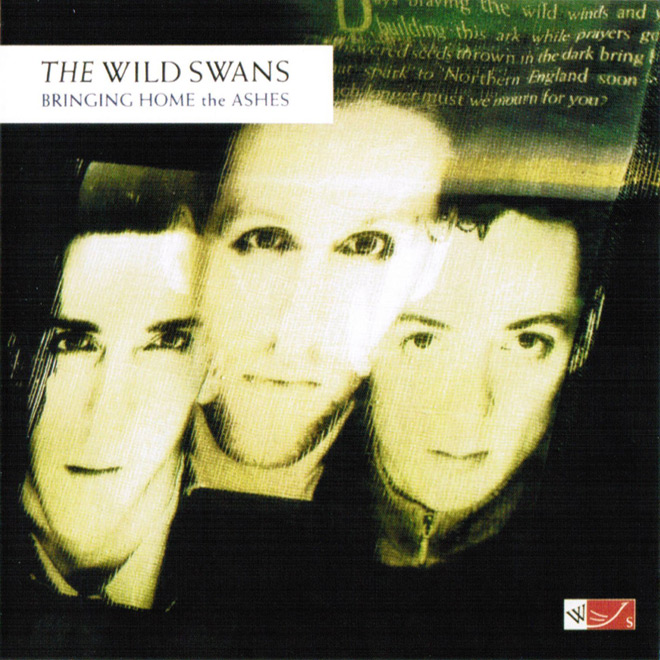 From Ashes to New – Quarantine Chronicles Vol. 2 (EP Review)
Like the in-depth, diverse coverage of Cryptic Rock? Help us in support to keep the magazine going strong for years to come with a small donation.