“Not a speck of light is showing/So the danger must be growing… Are the fires of Hell a-glowing?/Is the grisly Reaper mowing?/Yes! The danger must be growing/’Cause the rowers keep on rowing;” the famous line from the dazzling character known as Willy Wonka as the Wonkatania goes through the tunnel, picking up speed, in the 1971 musical classic Willy Wonka & the Chocolate Factory. A film nearly everyone has seen, regardless of age, the American Fantasy film directed by Mel Stuart (Welcome Back, Kotter series), and co-produced by Stan Margulies (The Jacksons: An American Dream TV series) and David L. Wolper (This is Elvis 1981, L.A. Confidential 1997), has etched its place in history as a cultural phenomena. Based on the book, Charlie and the Chocolate Factory, by  Roald Dahl, the story digs deep into the fantasies, hopes, and dreams of children of all ages, even 45 years later. 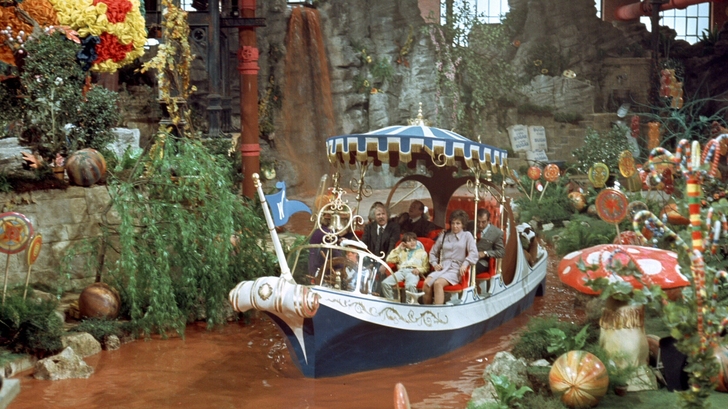 Released in theaters via Paramount Pictures on June 30, 1971, Willy Wonka & the Chocolate Factory was not initially very successful, although history has been extremely kind to it. The story begins years after Willy Wonka (Gene Wilder: Young Frankenstein 1974, Blazing Saddles 1974) has closed his doors to prevent the dastardly chocolate making competitor Mr. Slugworth (Gunter Meisner: Inside Out 1975, Faraway, So Close 1993) from stealing his recipes. Then, Wonka opened his doors to five lucky kids, who have found five golden tickets Wonka hid in his bars. Amidst the mixed bag is the glutton Augustus Gloop (Michael Bollner: debut film) along with his mom (Ursula Reit: In Trouble 1971, Main Thing Holidays 1972), the spoiled Veruca Salt (Julie Dawn Cole: Camille 1984) along with her dad (Roy Kinnear: Help! 1965, Herbie Goes to Monte Carlo 1977), the incessant gum-chewer Violet Beauregarde (Denise Nickerson: Dark Shadows series, The Brady Bunch series) along with her dad (Leonard Stone: Soylent Green 1973), the ultra-violent, TV watching Mike Teevee (Paris Themmen: Star Trek: Voyager series) along with his mom (Nora “Dodo” Denney: Splash 1984), and the poor, though, optimistic Charlie Bucket (Peter Ostrum: debut film) as well as his Grandpa Joe (Jack Albertson: Miracle on 34th Street 1947, The Poseidon Adventure 1972). All together, they are set to tour “the world of pure imagination,” and learn some valuable life lessons along the way.

The idea of turning the book, Charlie and the Chocolate Factory, into a film came from the unlikeliest of places when Stuart’s 10-year-old daughter persuading him into doing the project. He, then, showed the book to Wolper to ask him to be his producer. Incidentally, Wolper was working with Quaker Oats on a project to release a new candy. He got the company to buy the book rights to finance the project, and it was inked out that the film would be a children’s musical with the book’s author, Dahl, writing the script. Next, Stuart needed to find his Wonka and young cast. Interestingly, many from the cast of the Monty Python Comedy troupe vied for the Wonka role as well as known actors and singers like Fred Astaire, Spike Milligan, and Joel Grey. Then, Wilder came on with the stipulation that the Wonka introduction sequence seen in the film be done just as he describes to give audiences the sense of ambiguity of whether he is true or fake. 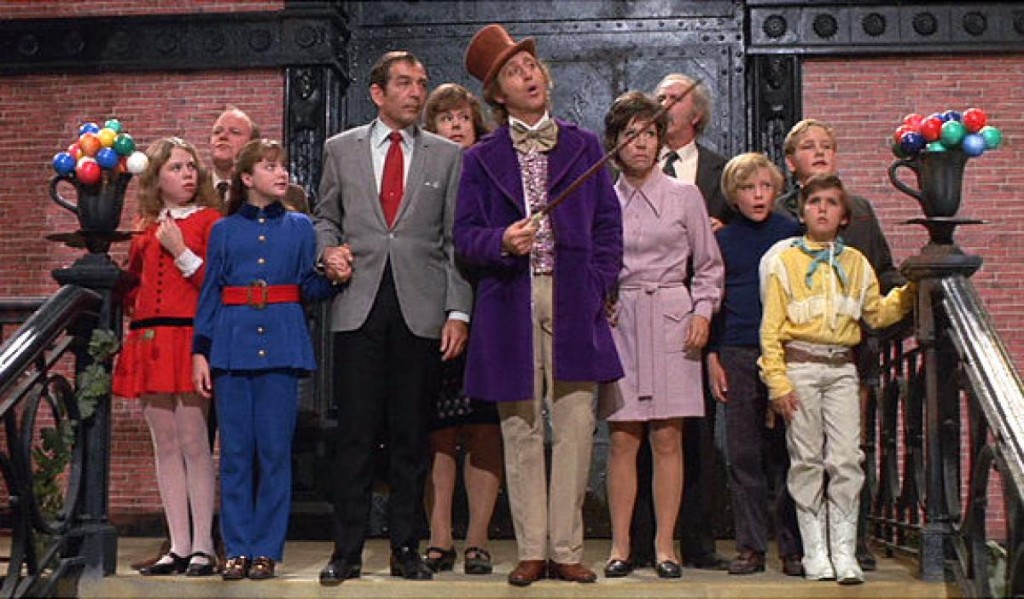 With the cast set, production ran from August 1970 through February 1971 in Munich, Bavaria, West Germany, because it served the three million dollar budget and it could be an anywhere land. Factory exteriors were shot at factories in Stadtwerke München while other sets, which some of which the cast were not allowed to see until the day they were used to get an authentic reaction, were just that with the chocolate waterfall actually being water with food coloring and, reportedly, later some cocoa powder. At the same time, all the effects were practical from the Wonkatania to Wonkavision, and the Wonka Wash.

Like all musicals, the music numbers by Leslie Bricusse (Hook 1991) and Anthony Newley (Goldfinger 1964) were integral to the storytelling of Willy Wonka from the wondrous Main Title, which is an instrumental medley of  “(I’ve Got A) Golden Ticket” and “Pure Imagination” to the ominous “The Wondrous Boat Ride”/”The Rowing Song.”  The duo was nominated for an Academy for Original Score. Above all, the songs are extremely catchy, amusing, and ones fans refer to often.

As stated, upon its release, Willy Wonka and The Chocolate Factory did not bare so well, taking in an estimated four million dollars on its three million dollar budget, despite a majority of positive reviews. Then, in 1986, the film was re-released to theaters with a twenty-one million dollar take when it left. When Dahl saw what had became of his creation, he reportedly disowned the film on the basis of a combination of major and minor plot deviations. In fact, he would not permit the sequel, Charlie and the Great Glass Elevator, to be made, even though it was already greenlit. Subsequently, the film was never made. Nonetheless, in addition to the Original Score Academy nomination, the film was nominated for a Golden Globe for Best Actor in a Motion Picture – Comedy or Musical for Gene Wilder while it won a spot in the National Film Registry to be preserved. 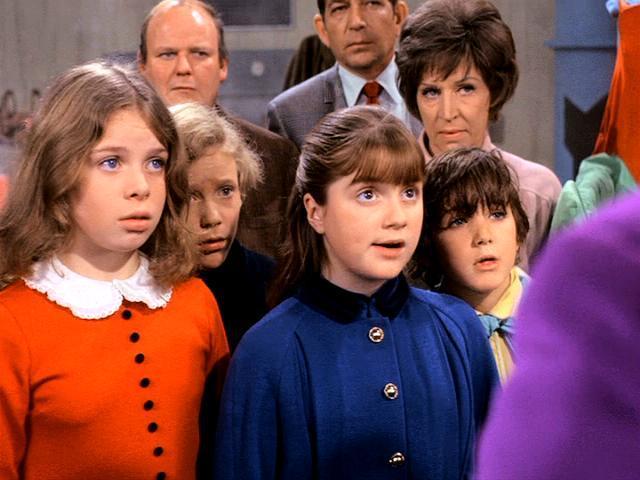 When the internet came about, the site Rotten Tomatoes gave the film an 89% Fresh rating while the Internet Movie Database has it with a 7.8/10. DVD sales have also been steady since the film was released for its twenty-five year anniversary in 1997, and every subsequent re-release since. Beyond that, practically every child growing up over the past three years have been bound to have watched the film with either their parents or as a daytime treat while mom and dad worked.

A testament to Willy Wonka & The Chocolate Factory’s lasting impression on Pop culture is the many nods it has gotten over the years. For instance, The Willy Wonka Candy Company owned by Nestlé has been in business since the movie was released in 1971. They produce such candy classics as the original Wonka Bar, the Everlasting Gobstopper, and Nerds. Entertainment-wise, the film has left an indelible mark with many nods, winks, and tips of a many hats beginning with the 1976 episode of The Muppet Show that Ben Vereen sang “Pure Imagination.”

Another example of Willy Wonka & The Chocolate Factory’s legacy is the 2000 episode of Family Guy, Wasted Talent when most of the episode is a spoof of the movie. Then, in 2005, Tim Burton directed Johnny Depp in the titular role in Charlie and the Chocolate Factory, which was a closer version to the book. Receiving positive reviews, many were polarized on Depp’s portrayal of Wonka, having the lasting image of Wilder’s Wonka engraved in their minds. A film that dared the masses to “Hold your breath, make a wish, count to three,” and see pure imagination, Willy Wonka & The Chocolate Factory will remain an all-time classic appealing to the better side of humanity for years to come. 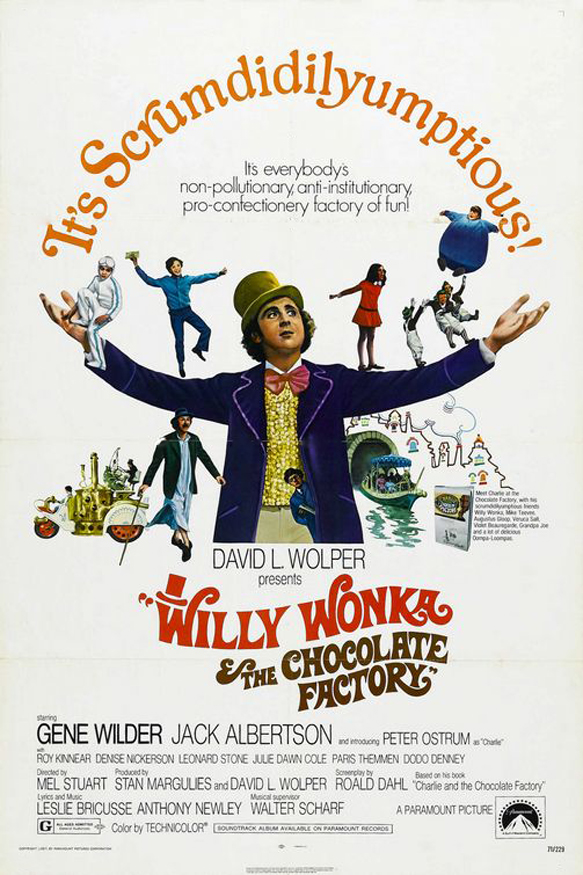