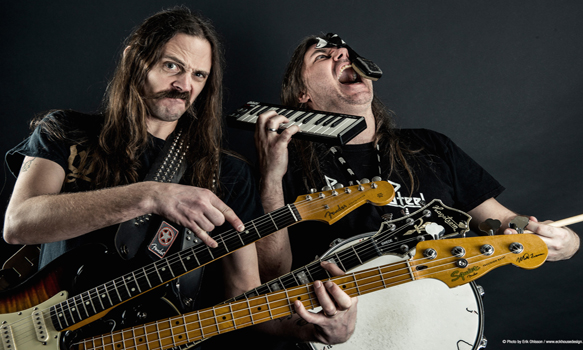 Few musicians from the Scandinavian Metal world hold as much clout as Mr. Dan Swanö. An iconic figure in the Swedish Metal community, Swanö has been involved in a laundry-list of bands, most notably Edge of Sanity. Owner of Unisound, the place where he produced Katatonia’s debut, 1993 full-length Dance of December Souls, and co-produced Opeth’s 1996 Morningrise, just to name a few, Swanö has been a very busy man through the years. Wondering if Swanö ever sleeps, most recently, he has teamed up with Ragnar Widerberg to form a new alliance, Witherrscape.

Born in 2013, Witherscape’s 2014 debut album, The Inheritance, was dubbed nothing less than brilliant by fans who yearned for more. Providing them with the EP The New Tomorrow in 2014, it was a welcomed offering as many waited for the next full-length. Now, the wait is over, Witherscape are back with their second full-length studio album, entitled The Northern Sanctuary. Released via Century Media Records on July 22nd, The Northern Sanctuary returns for just under fifty minutes of Melodic Death Metal bliss.

Known for their conceptional music, the story continues with The Northern Sanctuary, which includes artwork that was created by Hungarian Artist Gyula Havancsák. This time, the theme picks up where The New Tomorrow left off as it moves fifty years later with the main character Mannen i Vitt (the Man in White) buying the house where the horrific events initially began. He restored this house and rented rooms out to the city people looking to escape from the noise and lock into the northern side of Sweden for silence, hence, The Northern Sanctuary. However, despite being fifty years since the initial horror, the man in white becomes possessed by the entity in the house, resulting in him performing terrible acts to the guests. Apparently a portal to hell, the house is a host of rituals that opens the evil dimension.

With the backstory in mind, the album awakens like the opening to a Horror film with the song “Wake of Infinity.” Suspenseful, it moves and electrifies further with guitar distortions and keyboard instrumentals until a gruesome scream is heard as it builds heavier with possessive growls. Rolling in with a Groove-esque ’70s vibe, “Eyes of Idols” enters with growls slowly emerging with lyrics such as “dawn of the new day” and “escape from the darkness.” Stylistically, it pivots between Hard Rock and Death Metal. This is while a Progressive guitar solo picks up towards the end, as though it musically relieves the haunting disturbances.

A haunting and eerie sound picks up with “Rapture Ballet” as it moves further with different musical styles, including a hint of Thrash Metal. Here, the lyrics inform the listener that there is “No way for tomorrow” as the melody continues to shift between a soothing chorus and harsh instrumentals. Then, the pace slows down a bit with “The Examiner,” which opens with sorrowful piano as an acoustic guitar soon joins with the words “the sickness is not what it seems.” After expressing a distinguished emotion, the song evolves to a heavy tone as it soon slows down, discussing darkness. Married with an instrumental breakdown towards the end of the tune, it incorporates a unique guitar riff as it moves towards an ambient melody. Still rather mellow, the album moves along with soothing vocals that transition into demonic vocals on “Marionette.” Weaving in and out of the contrasting vocals styles, fear continues to move as the lyrics cry out, “searching for a place that’s safe and warm.”

As The Northern Sanctuary begins to reach its final leg, “Divinity” loudly enters with a guitar solo that chaotically moves through melodic and heavier riffs. This is before “God of Ruin” dramatically opens with a Progressive hook, followed by coarse vocals. As the song continues to move, the heaviness grows as well, adding to the album’s constant diversified movement. Thereafter, “The Northern Sanctuary” is the longest piece of the album, clocking in at nearly thirteen and a half minutes. Swanö described this tune as a response to unkind social media remarks. Therefore, he felt a thirteen plus minute track is far from safe. It quietly opens like a nursery rhyme before turning into a haunting and slightly disturbing tune, continuing with an ambient fog-like sound. It transpires towards a Progressive style up until it hits near silence with voices whispering.

Now three minutes into this epic track, it lifts up into complete mayhem and substantial obliteration. This does not last long, where just before five minutes in, everything slows down as the emotions grow darker. As bitterness continues to be described with an innovative guitar riff, it is at the ten minute moment when the lyrics dramatically pour in with words such as “the world crumbles away.” Essentially the album’s final track, it is followed by the outro of “Vila I Frid,” which is a piano induced soft melody that somberly moves as though death has taken over the haunted house.

Witherscape’s The Northern Sanctuary has far from played anything safe. It is filled with an imagery and storyline, where new questions will be answered upon each listen. It is intelligently disturbing with Swanö and Widerberg brilliantly crafted a eerie, atmospheric Metal soundscape.   CrypticRock gives The Northern Sanctuary a 4 out of 5 stars. 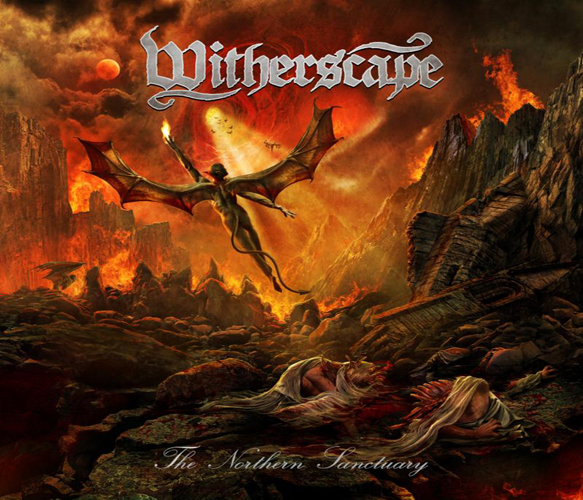 At The Gates – The Nightmare Of Being (Album Review) Asphyx – Necroceros (Album Review)
Like the in-depth, diverse coverage of Cryptic Rock? Help us in support to keep the magazine going strong for years to come with a small donation.