There is a calm intensity to the power of nature. We experience this best when we venture out into the woods, alone, opening our hearts and minds to the presence that is all around us. If you will allow it, if you can believe, the forest has an immense strength that can both entice and repel. If you believe – as many of the Irish do – that nature is a living entity and not simple a collection of things, then the forest is full of untapped potential. In Without Name – a new Paranormal Horror film from Global Digital Releasing, available on major platforms (iTunes, Amazon Instant, Google Play, etc.) as of June 20th with VOD to follow – the woods are lovely, dark, deep and, how shall we say, unwelcoming. 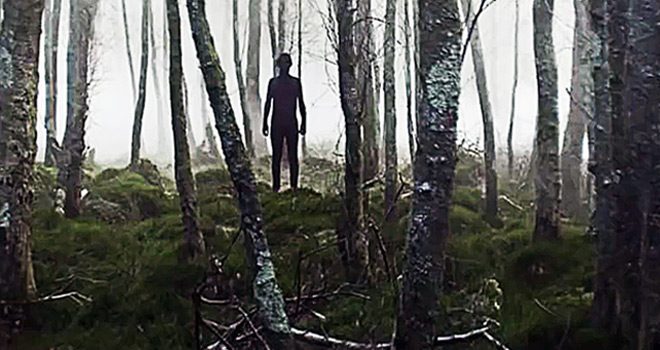 Without Name tells the tale of Eric (Alan McKenna: An American Werewolf In Paris 1997, Belle 2013), a land surveyor from Dublin, assigned to a somewhat secretive project in the Irish countryside. Forced to leave his wife Margaret (Olga Wehrly: The Crush 2010, Dark Touch 2013) and son Justin (Brandon Maher: First Love 2014, Hot Knives 2016) behind in the city while he completes the lengthy land survey, Eric takes to the country and moves into a seemingly abandoned cottage. Inside its vine-covered walls, he immediately discovers a bookcase full of treasures, including a worn journal, titled “The Knowledge of Trees.”

As Eric takes to his first day on the job, viewers witness a man who is highly invasive: his tripod crushes and destroys the earthen bed, he knocks over decaying tree-limbs without thought, he stomps around the forest with little to no regard for the landscape. In turn, the forest comes alive with light and shadow, creating a unique energy that is palpable.

Back at the cottage, Eric Skypes with the corporate big-wig (Morgan C. Jones: The Guarantee 2014, Game of Thrones series) who has purchased his services, inquiring about the specific importance of this parcel of land. The client dismisses Eric’s concerns, explaining that the land was intended for a hopeless development project that fell out when the economic boom crashed and it was sold for a pittance. As Eric continues to display clear reservations, he is simply directed: “The system doesn’t just protect the environment, it also protects those that wish to exploit the environment.”

What unfolds is a bit tricky to detail with simple words, although – as with so many films of the genre – a conversation at a local pub provides much of the required background. Local stoner – complete with soulpatch! – Gus (James Browne: Tree Keeper 2011, Storage 2016) has a penchant for hallucinogenic mushrooms and is quick to let slip that the cottage’s former owner, Kirlian Photographer William Devoy, was found wandering in the woods, suffering from hypothermia and completely catatonic. Gus further suggests that the land itself might have played a vital role in this nightmarish tale, as it is the land “without name” – not included on any maps and never given a proper name – in Gaelic they refer to it as “Gun Ainm.” Offering up a bit of further sage wisdom, he informs Eric that those who go missing in the fairy fields are doomed to wander forever in circles, though turning your coat inside out could save you from this hell. 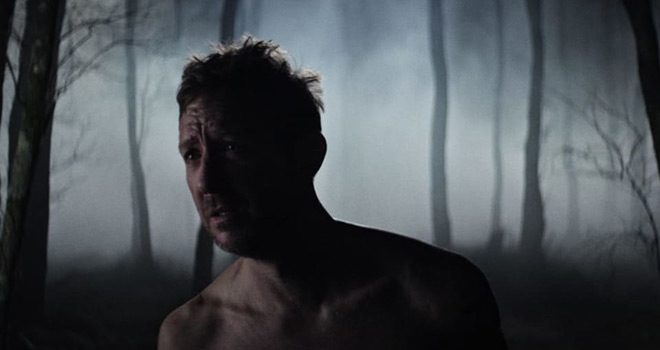 As Eric’s days unfold before us, he is joined by a lovely young blonde, Olivia (Niamh Algar: The Light of Day 2014, Vikings series), whom we quickly learn is his assistant and lover. Observant Olivia immediately realizes that the woods are more than what they initially appeared to be, and she quietly observes that it is “like a church” within the confines of the forest. In fact, she is spot-on: the woods are gorgeously lush, full of moss, color, life, vitality, and it is all so very abundant.

Quiet. Peaceful. If fairies do exist, you would find them in a place like this. With further scrutiny, she quickly realizes that all of that lush beauty is not exactly innocent: something is ‘off’ about these woods. As she observes Eric pacing in a circle to set up markers for their survey, he seems to disappear into thin air behind a tree. As she searches for Eric and moves about frantically, the woods seem to move around her; constantly restructuring their configuration as if to taunt and seduce.

What follows is a story that pits man against nature, hallucination against reality, dream against nightmare: the result being something that could be considered Paranormal Horror, Thriller, or a dark Psychological Drama. Without Name clocks in at approximately 94 minutes in length and begins with a stern warning for those with epileptic conditions to beware of photo-strobic activity and flashes throughout the film. Directed by Lorcan Finnegan (Defaced 2007, Foxes 2012) and written by Garret Shanley (The Message 1999, Self-Assembly 2014), as appears to be the case with many Irish films, the film is a gorgeously lush storytelling that depicts a sincere and innate respect for the natural world around us. If you love and respect nature, you will embrace Without Name; if you fear nature, well . . . Beware! She can be a very cruel mistress!

There is no gore here, no overt violence or horrifying scenarios. Instead, Without Name traffics in sophisticated, fine art imagery: the suffocating feel of the shadows creeping in; the haunting silhouettes in the mist; the nightmarish bend and flex of a leaf when there is no breeze; the claustrophobia of the forest. Forget jump scares, forget nightmares! This is a film that entices viewers with its beauty, seducing us into the forest where we must submit to the wiles of the natural world. Of course, to tell a tale such as this, a great lead actor is required and McKenna (Eric) carries the tale beautifully through his stellar acting skills. 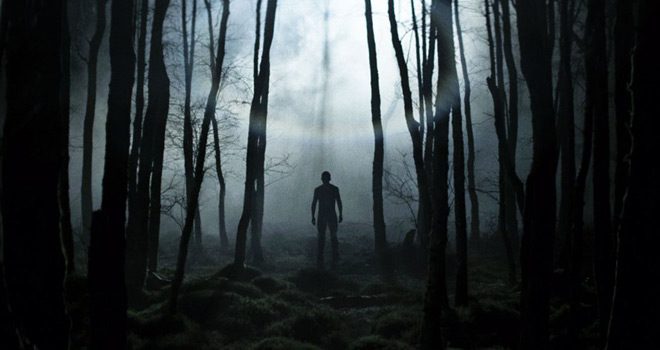 For his part, Browne (Gus) delivers some of the best lines of the film, pointing the way for viewers much like a human compass. This is not a script full of extraneous, useless dialogue, and much of the story’s intricate detail is told through the subtleties of body language, facial cues, and the interaction between actors and environment. The ensemble cast do a superb job of communicating on a massive scale with minimalist theatrics.

Similarly, as with every truly great film, the score here – composed by Gavin O’Brien and Neil O’Connor – is a magnificent blend of eerie atmospherics, haunting distortions, and captivating sounds. What the forest cannot speak, what nightmares cannot say, O’Brien and O’Connor communicate flawlessly through their score.

A beautifully-orchestrated trek into the woods, Without Name is hauntingly intelligent, artistic, and a sincere forewarning of what can happen in a world where nature is continually poked and prodded in an attempt to make her submit.

Magnificent acting, stunning visuals, lovely aural compositions, and a subtle approach to creating an overall haunting experience come together to formulate a film that is truly an experience, and a unique one at that. For these reasons, CrypticRock give Without Name 4.5 of 5 stars. 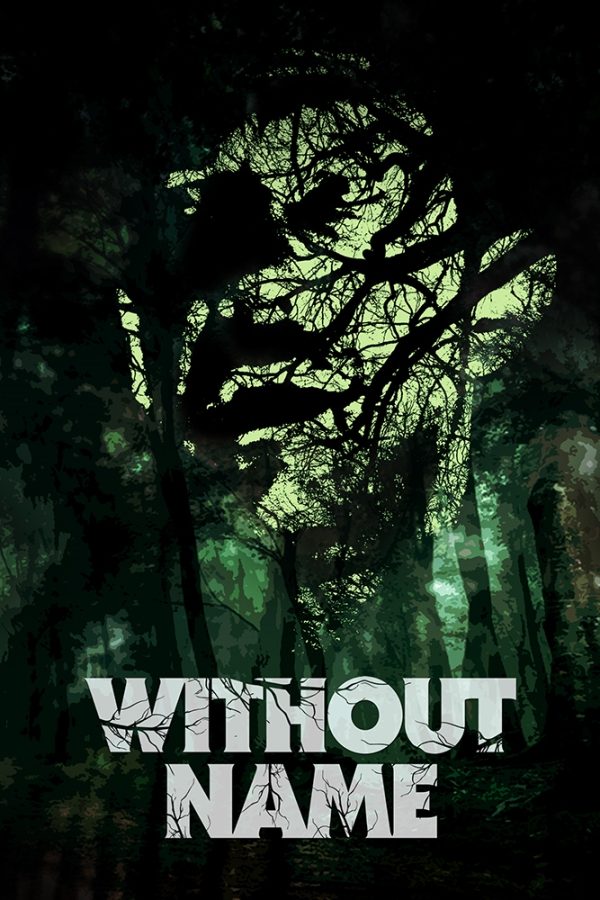