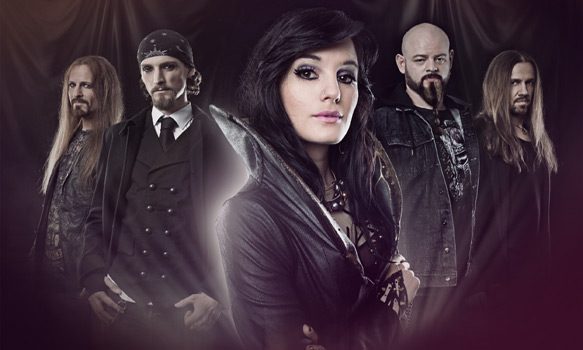 In its earliest beginnings, Opera was traditionally written in Italian or German. It seems perfectly fitting then that a Symphonic Metal band with gorgeous, operatic vocals would hail from Deutschland. This in mind, Bielefeld, Germany’s Xandria was founded by the band’s main Songwriter and Rhythm Guitarist Marco Heubaum back in 1997.

In a strange twist of fate, the band actually broke up shortly after their formation, only to resurrect themselves as a new unit two years later. In 2002, the band signed to Drakkar Records and released their debut album, Kill The Sun, a year later. Reaching #98 on the German music charts, five additional albums would follow, including 2004’s Ravenheart, 2005’s India, 2007’s Salomé – The Seventh Veil, 2012’s Neverworld’s End, and their most commercially successful, 2014’s Sacrificium.

A band’s history is rarely so simple and Xandria’s has definitely been fraught with lineup changes, but their impressive eighteen-year career stands as a testament to Heubaum and company’s stalwart perseverance. Throughout their nearly two decades, the band have shared stages with fellow Germans Schandmaul, Subway To Sally, Powerwolf, Tanzwut, Arven, and Lyriel, as well as Cradle of Filth, Epica, Delain, Sonata Arctica, Within Temptation, Kamelot, and many more. It is fair to say that those who are a European Symphonic Metal band on the scene, they more than likely have shared a stage with Xandria at some point.

All this said, it has been three long years since the release of the band’s sixth album, Sacrificium, but the wait is finally over for Xandria fans to discover Theater of Dimensions, their seventh studio album, due on January 27, 2017 via Napalm Records. Produced by Joost van den Broek, the album features an artistic, Steampunk album cover, and thirteen beautifully epic tracks with guest vocals from the likes of Henning Basse (Firewind/Mayan), Zaher Zorgati (Myrath), Björn “Speed” Strid (Soilwork) and Ross Thompson (Van Canto/The Display).

Xandria – Vocalist Dianne van Giersbergen, Guitarists Heubaum and Philip Restemeier, Bassist Steven Wussow, and Drummer Gerit Lamm – open with the hammering guitars and rhapsodic vocals of “Where the Heart is Home.” Swift drum beats, pounding bass, and a pure Rock-n-Roll guitar solo by Restemeier are the sonic drive behind the sublime, operatic vocals of van Giersbergen.

The first single off the album – which has also been released as a lyric video – “We Are Murderers (We All)” contains guest vocals from Speed of Swedish Metal band Soilwork. In a burning duet with van Giersbergen, Xandria paint a bleak picture of a world full of war, pollution, greed, and abuse. We are murdering our resources, our world, and each other, then turning a blind eye to our crimes. Rapid-fire drumming from Lamm hammers home an addictive Metal chorus, painting a macabre portrait that listeners will not soon forget.

Then there is “Ship of Doom,” a definite highlight of the impressive collection. With guest vocals from Thompson of German a cappella Metal outfit Van Canto, this is an enslaving, theatrical composition that conjures visions of Celtic shores, pirates, and a monstrous ship of darkness and doom. What becomes abundantly clear about Xandria in tracks such as this is that they are passionate about their music: be it a fourteen minute epic or a lively composition about a Heavy Metal doom ship. Each track is given the utmost care, arranged just so and produced to perfection.

One of the catchiest, most radio-friendly choruses on the album occurs within “Burn Me,” which features Zorgati of the Tunisian Progressive Rock band Myrath. While it is obvious that van Giersbergen can sing circles around Zorgati, his guest appearance lends a bit of spirit to the track, which is ultimately much the better for it. Also containing guest vocals, album namesake, “A Theater of Dimensions,” clocks in at over fourteen minutes and is an epic unto itself. Spoken word, symphony, poetry, punishing drums and bass, and soaring vocals are all present and accounted for. Henning Basse of Greek Power Metal band Firewind lends his vocals to this production that is often times more Broadway than Heavy Metal.

Overall, Theater of Dimensions presents layer upon layer of Xandria’s fiery and bewitching, lofty and broad Symphonic Metal sparkle. Wade through the brume of synthesizers and Wussow’s deep bass grooves to experience the multiple layers of “Song for Sorrow and Woe,” an epic that shows the varying dimensions of Xandria’s works in just one song. From the ballad “Dark Night of the Soul” to a sassy van Giersbergen on “When the Walls Came Down (Heartache Was Born),” there is no filler here. Even the Celtic instrumental “Ceilí” has its perfectly positioned place.

Xandria exude a perfect sonic contradiction: classically operatic vocals pitted against scabrous, pulsating Metal. The end result is a stellar clash of the bold and the beautiful, musically speaking. When it comes to Theater of Dimensions, CrypticRock gives the album 4 out of 5 stars. 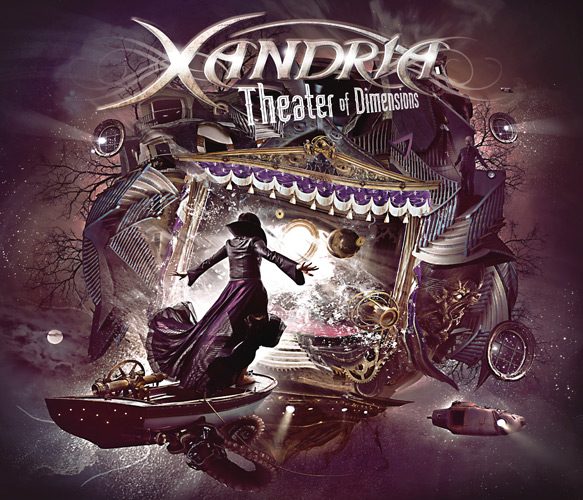