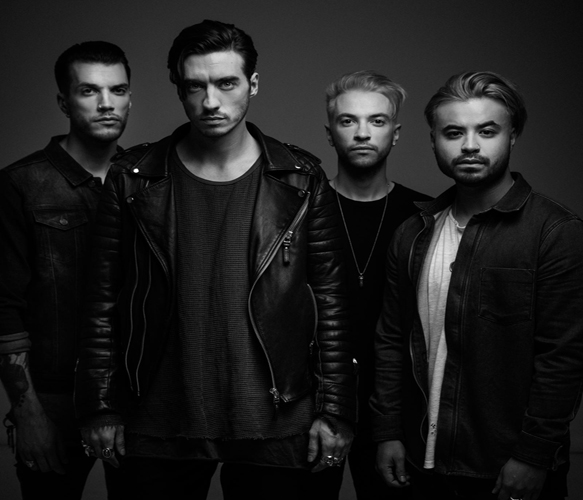 Since their formation, British band Young Guns have continuously climbed Rock rankings in Europe, and more recently, the United States. Quickly gaining attention with their 2010 self-released, debut, full-length album, All Our Kings Are Dead, the band found themselves in the British charts as well as on the the shortlist of the Kerrang! Awards in the category Best British Newcomer. Signing on with Wind-up Records, they quickly began to show growth with 2012’s Bones and even more explicitly with 2015’s Alternative Rock masterpiece, Ones And Zeros. Following opening slots on tours with Bring Me The Horizon, Asking Alexandria, Bullet For My Valentine, and Breaking Benjamin, to name just a few, raised the band’s awareness level consistently.

Still, Young Guns have plenty of room for growth as they move forward. In fact, Lead Vocalist Gustav Wood told CrypticRock, “We never really necessarily had a grand plan or a goal of where we wanted to be, it has always been about writing music that excited us.” A fair and honest outlook, Woods and Young Guns look to explore their songwriting even further with their forthcoming album, Echoes. Coming relatively quickly after Ones And Zeros, Echoes will be released on September 16th via Wind-up Records and sees the band working with Producer David Bendeth (Paramore, Bring Me The Horizon). The first album by the band not to include long-time Drummer Ben Jolliffe, who was replaced by Chris Kamrada, he joins Wood, Fraser Taylor (guitar), John Taylor (guitar), and Simon Mitchell (bass). Quite busy touring throughout 2015 and into 2016 with a lengthy run on Vans Warped Tour, it is amazing to think Young Guns found the time to write and record Echoes, but it is clear this band is highly motivated.

All these facts alone register the smell of hits in the air before listening to a single note of Echoes. Certainly this impression is affirmed when the first sounds of Echoes creeps out of the speakers. That being said, Young Gun’s Alternative Rock sound has a certain indefinable and compelling something. This is clear from the opening where haunting single “Bulletproof” wafts through the air. Intensive as well as rocking with the permeable voice of Wood, the talented musician is also responsible for keyboard and synth-inputs, which set the tracks apart from the Alternative Rock old story.

Continuing to impress, title track, “Echoes,“ comes in with the strong synth hook-line weaving through the song, which peaks in an ear-catching chorus. Recently premiering the track a few weeks back, it was reportedly one of the first written early on in the creation of the album, and judging by its sound, is a nice blend of earlier Young Guns styling with their modern day approach. Then, with “Paranoid,” listeners gets smashed in the head with the album’s next potential hit-single. Highlighted by the guitar duo of Fraser and John delivering a solid performance to match the hellish grooving rhythm section of Mitchell and Kamrada, it is a track prime for success.

Keeping up with similar qualities to previous tracks, the single “Mad World” is a heavy mix of powerful vocals, potent lyrics, and razor sharp guitars. Mellowing the mood, “Awakening” features a song-structure reminiscent to 30 Seconds To Mars with its alternating calm and atmospheric verses matched by powerful choruses. Then, “Living In A Dream Is So Easy“ convinces also by sneaky electronics and keyboards that peak in a classic Alternative Rock sing-a-long anthem. This is while “Buried” comes along as a perfect up-tempo sound peppered with electronic synth-loops and gimmicks. It also has hit written all over it, but without sacrificing musical integrity as the spacey guitar melody and Wood’s voice shine brightly. The same could be said for “Mercury In Retrograde,” which is catchy enough to earn radio airplay. With vocal hooks that are irresistible, the sound is universal enough to please Rock fans as well as perhaps even attract some Pop ones.

On the other hand of heavy, full production, “Paradise” is a stripped down ballad featuring simple effects, piano, drum beat, and Woods voice. Quite striking, Woods bares his soul in this telling tune that would be interesting to hear in a live setting. This leads into the album finale, “Afterglow;” a closer which unites all the elements of Echoes perfectly, and yes, could be another hit single.

There should be no plausible reason why the altitude flight of the Britons Young Guns should stop with Echoes. The next step after Ones and Zeros, Echoes is everything fans of modern Alternative Rock need. Those familiar with Young Guns could say perhaps they found the balance between their heavier days and their more recent electronic textured Alternative sounds. With aforementioned tracks like “Buried,” “Echoes,” and “Paranoid,” it smells suspiciously of the mainstream breakthrough for this likable, charismatic five-piece. CrypticRock gives Echoes 4 out of 5 stars. 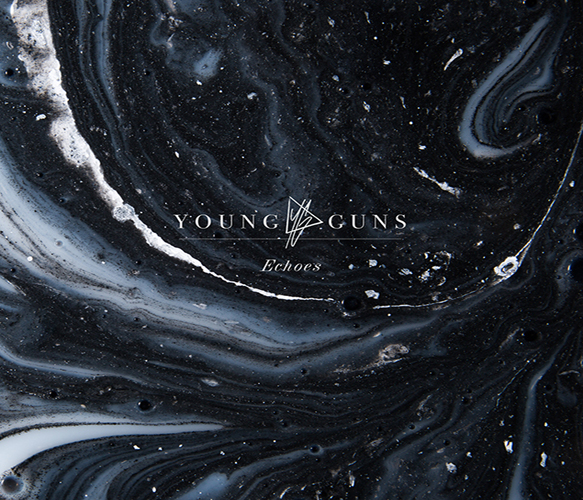