Zombie movies have been a staple of American Horror since the 1968 George A Romero classic Night of the Living Dead graced the silver screen. Since then, Zombie movies have tried to mimic the terror that Romero unleashed upon unsuspecting audiences, and as of late, the Zombie Horror film has almost become its own genre. From recent blockbuster hits such as 2013’s World War Z , to low budget (or just bad) films such as Steve Miner’s 2008 Day of the Dead, some films are just for hardcore fans of the genre to enjoy. That leads to 2015 film Zombie Killers: Elephant’s Graveyard, which falls somewhere in the middle and a bit closer to the latter of Zombie films. Written and directed by Harrison Smith (The Fields 2011, Camp Dread 2014), the film features a strong cast of actors from Billy Zane (Tombstone 1993, The Phantom 1996), Dee Wallace (The Howling 1981, E.T. the Extra-Terrestrial 1982), and Mischa Barton (The O.C. 2003 series).

Zombie Killers: Elephant’s Graveyard centers on a group of people living in a Post-Zombie community, led by Doc (Brian Anthony Wilson:  Law Abiding Citizen 2009, Limitless 2011), an ex-military physician. Although the hierarchy of command is never quite established, the village doctor seems to be the one who has established the rules of the community. One of established rules: The infected have a choice, they are either cast out of the village or killed on site. The rule sets the stage for the dramatic portion of the film.

Seiler, played by Zane, is the leader of a group of “Zombie Killers” made up of the teenage and twenty somethings from the village. Their job, as the name implies, is to venture outside of the comforts of the village and patrol for zombies and kill them. Although as the title suggests, one would think the movie is centered on the zombies and the zombie killers, instead equal time is spent trying to show life on the inside and outside of the village border. The zombie interactions are few and far between, and fail to create the tension that is attempted.

Felissa Rose, of 1983 cult classic Sleepaway Camp fame, leads a religious group of villagers as Lia. Rose does a fantastic job of being just creepy enough, but is criminally underused and her character does not seem to drive the plot forward. It is yet another example of the movie trying to focus on too many things at once.

The most interesting part of the movie is the part that is most under-emphasized. The question: “Why are the zombies behaving the way they are” is alluded to, but never really formally addressed or answered. The movie could have been blatant, or even subtle social, commentary on industrial negligence, but the message falls short. Instead the film focuses on scenes trying to establish personal relationships and trying to build compassion for characters before they are killed off. Some of those prime examples are a cancer stricken mother, Sharon Sommers played by Wallace, and her son Ian (Michael Kean). Kean, a relatively new actor, also is the center of another strong relationship held between Ian and girlfriend Nikki Slater (Gabrielle Stone: Speak No Evil 2013, Cut! 2014).   What Zombie Killers: Elephant’s Graveyard does do right, is establish that the real evil was not on the outside of the border, but living next door to everyone, and instead of craving flesh, it craves things like control and power.

Overall, the ideas and concepts in Zombie Killers: Elephant’s Graveyard would have been better suited for a television series. When there is only one and a half hours to entertain an audience viewing a Horror movie, the movie should provide as much quality Horror as possible, and it seems this film has a lot of promising themes that need more time. Focusing more on the relationships the characters have with each other, as opposed to the actual threat of zombies, leads to a huge loss in momentum because of this lack of time. While not a terrible film by any means, the movie is for the most hardcore of genre fans and perhaps not for a more mainstream zombie lover. CrypticRock gives Zombie Killers: Elephant’s Graveyard 2 out of 5 stars. 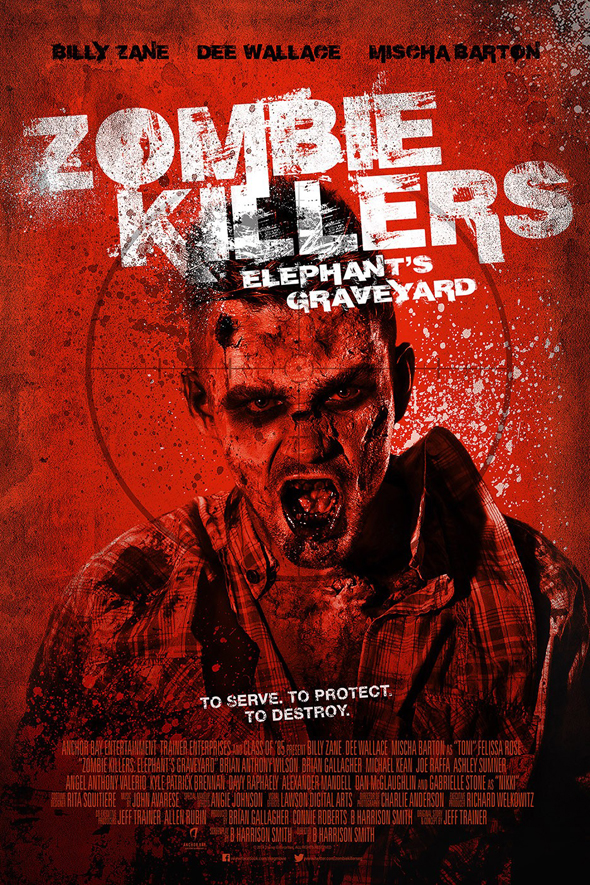