Budweiser Made In America Festival Explosive Day One Philadelphia, PA 8-30-14 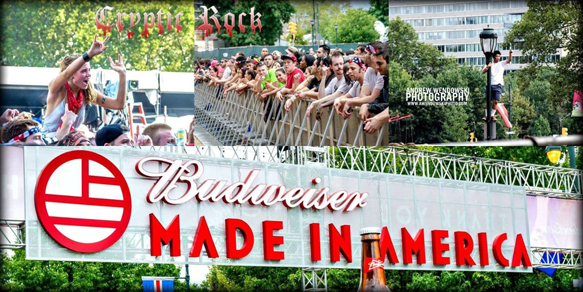 When Jay-Z puts on a festival, he does it right; proving so with the third annual Budweiser Made In America Festival.  Hand picking the line-up with co-founder Steve Stoute, the annual festival traditionally held in Philadelphia PA expanded to Los Angeles, CA where both concerts took place simultaneously Labor Day weekend August 30th and 31st. In the city of brotherly love, the line-up ranged from from hip-hop, rock, EDM, to pop, making sure there was something for everybody to listen to and get excited about.  Whether it was Kanye West, Steke Aoki, Kings of Leon, or Tiesto, music lovers could sit back, listen to music, drink Budweiser, and have a great time.  Consisting of four stages; The Rocky Stage, The Liberty Stage, The Freedom Stage, and The Skate Park Stage, despite the oppressive heat, day one was ready to be a blast.

With many arriving early at The Benjamin Franklin Parkway as the gates opened at 12 noon, they went to check out Los Angeles, CA’s Young & Sick at the Liberty Stage.  Currently signed to Harvest Records, the project is R&B/Indie styled music formed by dutch vocalist/artist Nick Van Hofwegen, AKA Double Threat.  Having created album artwork for such artists as Foster The People and Robin Thicke, Van Hofwegen promotes fashion through his music and attire, which certainly showed during the performance.  Possessing a very unique sound, Young & Sick showed off some great melodies that had the crowd grooving to each jam.

Opening the Rocky Stage was two-piece electro-pop duo from Nashville, TN currently signed to Columbia Records by the name Cherub. Cherub puts on a very vibrant live performance with honest original electronic music.  Beginning slow with a lot of interesting beats then steadily picking up, the vocals of Jordan Kelley & Jason Huber were unbelievable.  Reaching for the sky with pitch perfect tone, they harmonized perfectly together throughout their entire set.  Their album Year Of The Caprese is out now.

New York native DJ Cassidy brought energy to the crowd at Liberty Stage with a strong and funky first impression when entering the stage with his white top hat & pink suit. Beginning with spinning  a lot of mixes of already popular radio pop/hip hop music with his own unique flavor to it as he sprinkled in some of his own original songs. DJ Cassidy livened up the mood and got everyone on their feet and dancing . Stay tuned for the announcement of his debut studio album Paradise Royale.

Already a hot day thus far, indie rock band The Neighbourhood definitely got the crowd a little more steamy with their hot performance on Rocky Stage. The five-piece indie rock band from Newbury Park, CA formed in 2011 has managed to develop a unique yet captivating sound in a short amount of time that was showcased on their 2013 album I Love You.   Walking out in all black & white attire, the Billboard Chart topping hit “Sweater Weather” was definitely a fan favorite along with “Let It Go” and “W.D.Y.W.F.M.?”.  Lead vocalist Jesse Rutherford led the near-capacity crowd like a pro, giving them exactly what they yearned for.  Closing the set with “Afraid”, the reverb from their guitar resonated long after they departed. The Neighbourhood may not be a glamorous rock band, but they perform with this loudness and focused chaos that makes the dark things in life look and sound beautiful.

Next up was Grammy-nominated American singer, producer, songwriter, arranger, audio engineer, DJ, rapper, and multi-instrumentalist Mayer Hawthorne currently signed to Republic Records.  Capturing Liberty Stage, imagine 70’s rock mixed with modern pop recording techniques and you have Mayer Hawthorne. The entire band on stage dressed to impress with high fashionable looks different than any others. Hawthorne’s microphone was draped with a colorful scarf as a small table sat to the left of him with a owl watching over the crowd as the band poured out upbeat catchy pop rock tunes. Do not miss this intriguing talented artist.

Bringing on the old school hip hop flavor ,Brooklyn, NY M.C. Big Daddy Kane has been rocking mics since 1986.  Revolutionizing hip hop, it was exciting for everyone to see him on stage at Budweiser Made in America.  Proving that he is a class act lyricist, Bid Daddy Kane had the crowd moving and jumping all to crisp beats during his lively performance. Spewing out words with such ease was truly a remarkable sight to see.  Be sure to check out his latest project Las Supper’s newest release Back to the Future (2013).

Changing things up again, two-piece romantic electro funk band from Montreal named Chromeo walked out to a crowd chanting their name before erupting in cheers as they began on Liberty Stage.  Their set mixed funky electronic beats and harmonized vocals which showcased the duos talents.  Possessing a similar vibes as Daft Punk, their sound is definitely a homage to classic 80’s synthpop with their own personal twist.  They had the crowd dancing all the way through especially during the track “Jealous (I Ain’t with It)”.  Their fourth studio album White Women (2013) is out now.

Up next, City And Colour is the recording alias for Canadian alternative rock/folk singer-songwriter Dallas Green. Taking to the Rocky Stage, the name City and Colour comes from his own name; Dallas, a city, and Green, a color. City and Colour had a very different set compare to the other main stage bands on this festival.  Taking a different approach with their slower paced, blues-like feel, this interesting band gave the crowd a relaxing segway into the rowdiness to come. While appearing boring compared to the faster pace acts, they were by no means boring. With a great sound, this different type of music did display awesome guitar riffs while the band poured their hearts and attention into their craft.

Bringing back the hip hop was talented young aritst J. Cole on Liberty Stage.  Signed to Jay-Z’s Roc Nation label, J. Cole has been turning heads in the genre with a slew of awards and critical praise.  With lyrics that touch on everything from his upbringing in North Carolina to the poverty and hopelessness that affects his community and the world around him, J.Cole put on an enthusiastic performance that warrants a return invitation to Made In America in the future.  Check out his impressive 2013 album Born Sinners.

As the night wore on, five-piece indie rock band from Ohio named The National drew a massive crowd at Rock Stage.  Signed to 4AD, the bands deep and dark sound is highlighted by vocalist Matt Berninger’s thoughtful singing.  Playing a fourteen song set with favorites such as “Don’t Swallow the Cap”, “I Should Live in Salt”, “Graceless”, “Fake Empire” and more, The National had everyone’s attention.  Complemented by soft tender melodies, the atmosphere was thick with emotion all the way through.  For those unfamiliar with this band check out their 2013 album titled Trouble Will Find Me.

Closing out the Liberty was EDM act Steve Aoki.  Known for his non-stop energy pumping live shows, Aoki brought everything he had to the stage as thousands of attendees watched, including Jay-Z himself.  Upbeat and inspiring, his unmatched tempo and spectacular mixes on the turntables had everyone screaming for more.  With added ambience by pupil-dilating lighting, Aoki blew everyone’s mind as they moved to the beats he offered up.  Now everyone awaits September 30th when his second album Neon Future I is unleashed.

After Steve Aoki was done shaking the Parkway, Kanye West closed out the festival with a silhouette-styled lit performance performing many of his hit songs and doing a stellar job giving the crowd everything they wanted to see and hear.  Overall, day one of Made In America was a great beginning of exciting acts which had a positivity and light that would certainly carry over into day two.

Andrew Wendowski is a Photographer that specializes in Live Musicians. He currently shoot shows in Philadelphia, PA and New Jersey, for multiple publications.