Alestorm – No Grave But the Sea (Album Review)

Just when the thought that Heavy Metal could not possibly branch out into more unusual genres came into play, Pirate Metal was born. One of the stand out kings of Symphonic Folk Metal, or more specifically categorized, Pirate Metal, are none other than Alestorm.

Originally hailing from Scotland and battling a few lineup changes, the band is now set to release their fifth studio album, No Grave But the Sea, via Napalm Records on May 26, 2017. After five plus albums chock full of tales of treasure hunting and pirate life, what more could they possibly explore? Well, the truth is that a Heavy Metal pirate life is very limited when it comes to ideologies ranging beyond starboard bound, and sometimes less is more in the musical context.

Current members of Alestorm feature original member Christopher Bowes on lead vocals, keyboards, and keytar; Gareth Murdock on bass guitar and backing vocals; Peter Alcorn on drums; Elliot Vernon on keyboards and backing vocals; as well as Máté Bodor on guitar. The keytar, as well as the wenches and mead, are major players in the role of Alestorm. In fact, without them, these swashbucklers might be taken unnecessarily seriously; which would be the equivalent of plank walking to their own demise.

Their follow-up to 2014’s Sunset on the Golden Age, No Grave But The Sea begins of with the powerful title track full of heavy vocals. Then, breaking into silly mode, comes “Mexico,” telling a story of travels to Mexico and nothing more. However, it has a certain wit and charm about it along with a catchiness in the lyrics that put a spark in anyone’s eye. They are definitely known to play off originality and lack there of that happens to be eloquently expressed in the song simply called “Alestorm.” About a storm of beer of course, it actually jumps back and forth well between the heavy and the Folk as their latest theme song pursuit.

Perhaps the most pleasantly witty Folk based ballad of them all is the song “Fucked With An Anchor,” which of course rhymes with wanker and a bunch of other blasphemous lyrical jollies. If anger and frustration is left out all over the table, this song will sweep it all out of existence. This loveliness is followed by the lively “Pegleg Potion,” which is the appropriate length of about three and a half minutes of pirate pre-partying. Then the final of the remaining three tracks, low and behold, is called “Treasure Island.” Bringing a most epic Power Metal type keytar central vibe and thrust into play, when mixed with the guitars, at certain moments it leaves an excitement for more, and with its seven and a half minute range, more is had.

As a live band, Alestorm brings the pirate look and feel to the stage and are not so typical as one might think at first glance. The keytar is mastered well and the live visuals give it added appreciation while the guitar and vocals spin the tale as it should be told. That said, compared to previous albums, does No Grave But the Sea live up to its counterparts? It has its perks and punches, yes, but the inevitable repetition in the subject matter that has not quite sorted itself into a new perspective keeps it chained to the lower bunk at the moment. The saving grace seems to ride in the title track as well as “Fucked With An Anchor” for its non-conformist attitude and shock value lyrics.

All in all, Alestorm is still alive and kicking, and with the strict subject matter at hand, they have still pushed the limits and commanded more of the positive attention they deserve. Without further malarkey, CrypticRock gives Alestorm’s No Grave But the Sea 4 out of 5 stars. 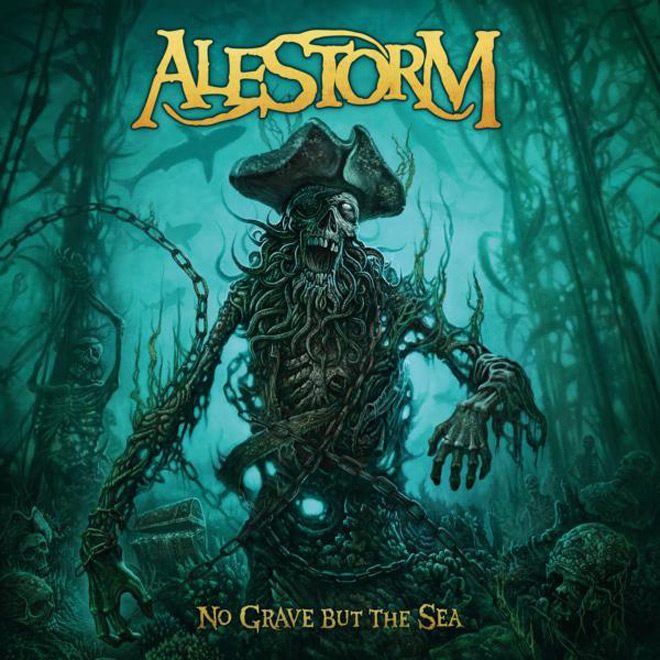