Vampires everywhere: if you enjoy a little blood with your lust or a little death with your blood, behold the Blood Lust And Death Tour starring co-headliners Dope and Combichrist along with September Mourning, as well as Davey Suicide. A 35-stop run sponsored by Black Craft Whiskey, it all began back in February out in Portland, Oregon before slowly working its way inland toward the East Coast through the month of March. Scheduled to wrap up on April 9th out in Los Angeles, California, the creatures of the night came out in droves to witness the carnage on Friday, March 24th, when the tour stopped at the famed Palladium in Worcester, Massachusetts.

A less than typical Friday evening in Worcester, the crowd was exactly what one might expect, though with some surprises: face paint, skull motifs, leather, and studs were all present to complement the black-on-black fashion selections. That in mind, fans’ anticipation was palpable as they waited in the hall for the show to begin.

The first band to take the stage on this evening would be Davey Suicide. Hailing from Hollywood, California, the Industrial Metal outfit have faced some serious struggles in years past while dealing with some fallout drama with their former label. Now that they have severed ties with these past problems, the band are ready to rise like a phoenix from the ashes. Ready to mark a new beginning with their latest release, Made from Fire – which was released on the same day as the Worcester show – Davey Suicide and their die-hard fans were clearly in a celebratory mood on this night.

Coming out with fire in their eyes, Davey Suicide and his band of Guitarist Niko Gemini, Bassist Derek Obscura, Drummer Drayven Davidson, as well as Keyboardist Needlz kicked off the set with copious amounts of fog and some seriously slamming beats. Everything about their set seemed like a well-choreographed theater act: from costume changes and props, to the aforementioned heavy mist. Every move was rehearsed to keep the crowd focused and ready to rock.

Dishing out one killer tune after another, for the anthemic “Too Many Freaks,” Davey donned a ringleader jacket and worked the crowd to a proper, freakish frenzy. Another track from their new album, “Rise Above” seemed to be an equally huge crowd-pleaser and already beloved by the diehard fans who knew every single, motivational lyric. When it was all said and done, the group’s big finish was “Generation F*ck Star,” off their debut, self-titled CD. Having the audience going absolutely wild for this salute to all things raucous, the atmosphere was amped to a higher level for the next performers. 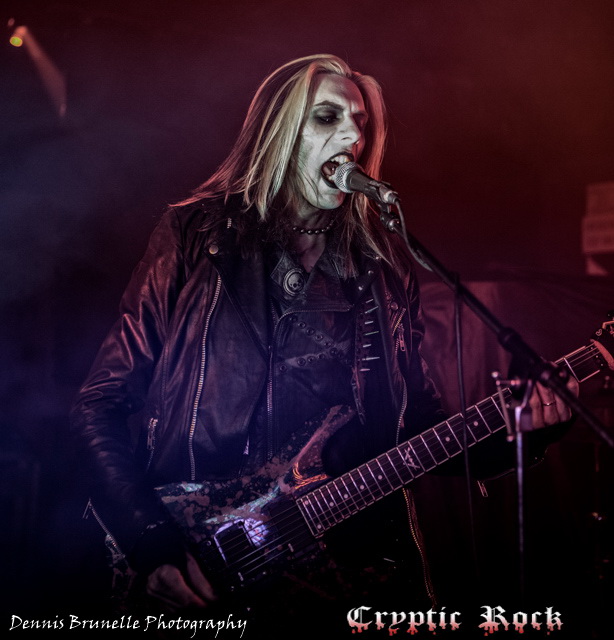 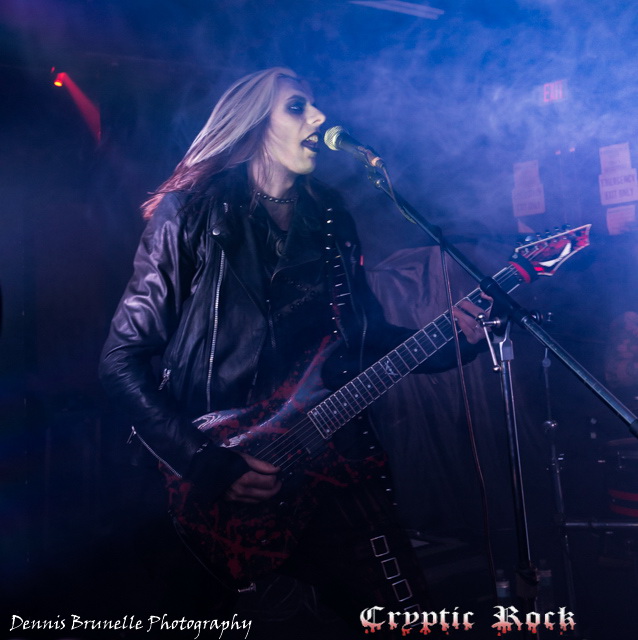 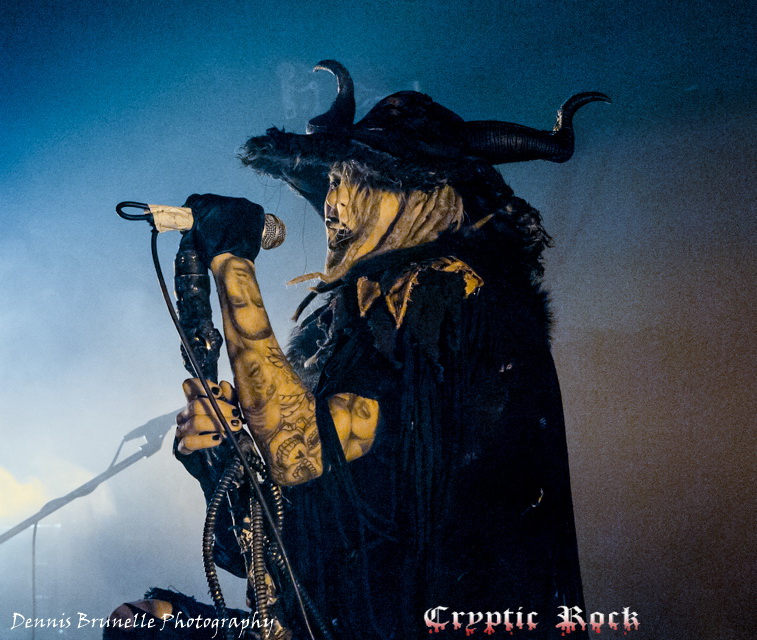 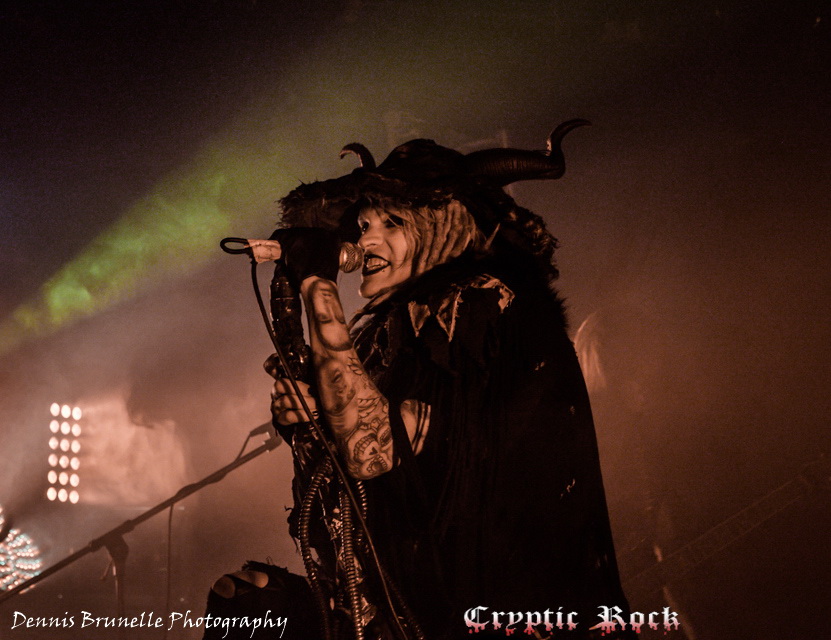 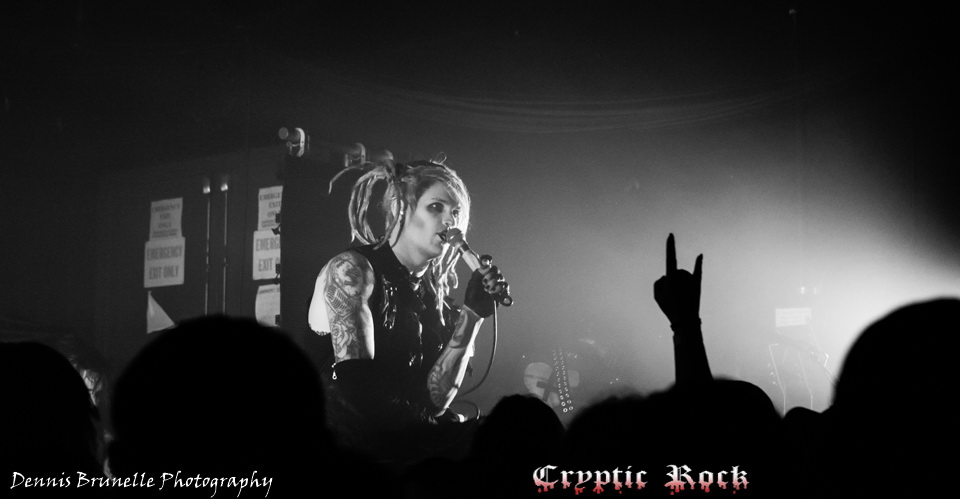 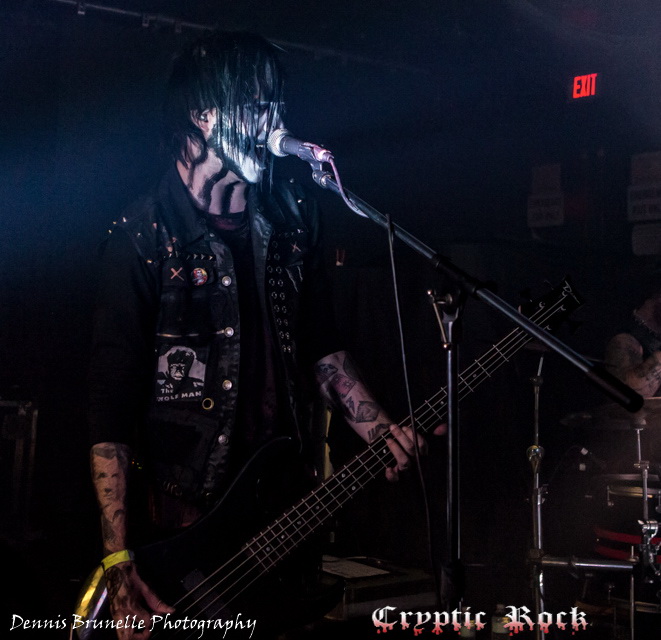 The second act to hit the stage was ever so theatrical September Mourning; a transmedia, dark culture project led by Emily Lazar. The project is no simple musical act, no: instead they create multi-layered performance art using various mediums to tell their stories. Incorporated into the tales are the talents of Rich Juzwick and Kyle Ort on Guitar and Josh Fresia on Drums. Out on tour in support of their well-received 2016 album, Volume II, September Mourning were ready to entrance the eager audience.

While their set was unfortunately abbreviated, it nevertheless caught the crowd’s attention. After a rough start due to technical issues with Lazar’s microphone, they made an amazing comeback with “Angels to Dust.” Moving about the stage with grace, September quickly hypnotized the room as the band provided tight, heavy instrumentation. A dream-like experience, once the band moved past this initial snafu, the crowd was able to fully enjoy the music. Wrapping it up with a bang, the audience unleashed their fury in the pit for their big finish of “Children Of Fate.” Certainly unique to other bands in the heavy music genre right now, September Mourning have a bright future ahead of them as they continue to sweep the scene. 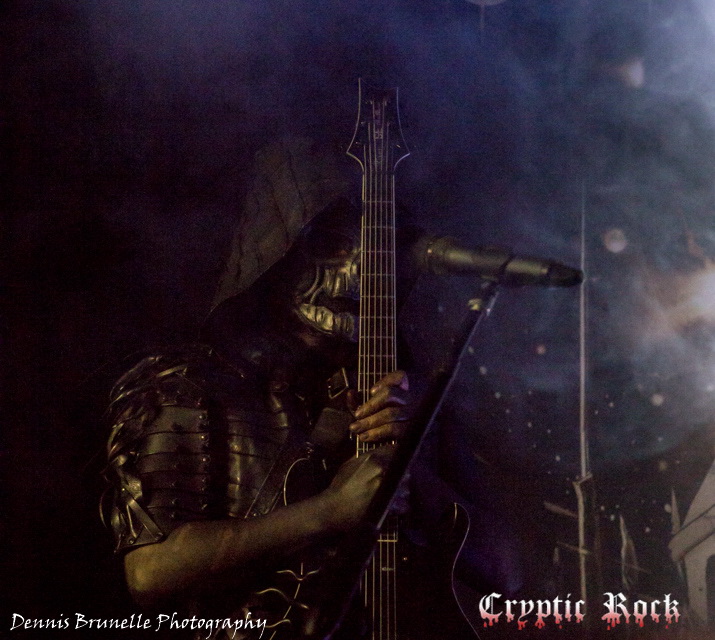 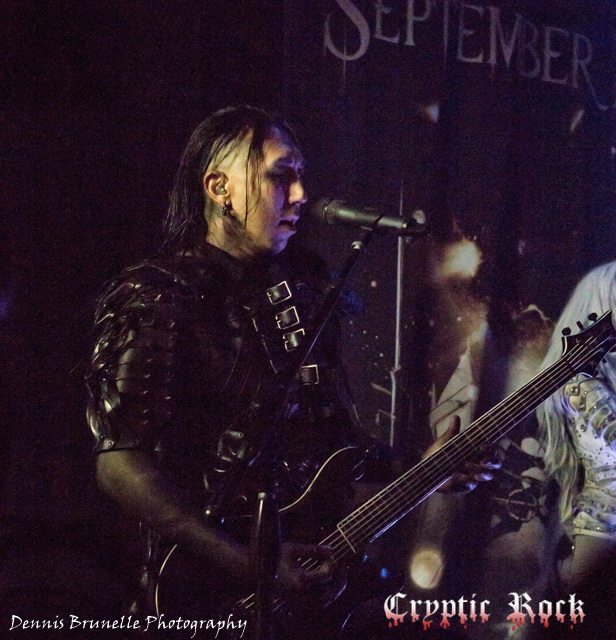 As September Mourning left the stage to thunderous applause, the torch was now handed over to Combichrist. A celebrated Aggrotech/Industrial Metal hailing from Atlanta, Georgia by way of Norway, Combichrist are no strangers to the stage as their eleven-year career will testify. Currently touring in support of their eighth studio release, 2016’s This Is Where Death Begins, Andy LaPlegua and company took to the stage ready to prove that a fierce serving of aggressive beats of Industrial Metal is definitely what the Rock doctor ordered.

As the lights went dim, the band began to tease the crowd with a recorded orchestral version of “What the Fuck is Wrong with You,” one of the group’s biggest hits. Then, as LaPlegua stepped out on stage, the normal version of the song kicked in and took over the crowd’s attentions. With everyone pumped to sing-along, the rest of the group stepped on stage. From here, the volume of excitement grew considerably as Eric13 grabbed his guitar, Brent Ashley strapped on his bass, Joe Letz climbed behind the drumkit, while Nick Rossi worked the additional percussion. A superb preparation for the insanity to follow, Combichrist launched into “Blut Royale,” thrilling the crowd who immediately started up a circle pit that continued throughout the entire duration of the band’s set.

Moving on at a rapid pace, during “Skullcrusher,” the band made use of the huge light boards set up around the venue to add an intense layer of visuals. In fact, Combichrist repeatedly encouraged as much crowd participation as possible, helping frisky crowd-surfers to safely return to the tumultuous pit for more hardcore fun. Thereafter, “Throat Full of Glass” saw the crowd struggling to keep multiple crowd-surfers afloat and it kept the energy high for the many energetic tracks to follow, including “Zombie Fistfight,” “Exit Eternity,” and “My Life My Rules.”

Harsh and energetic all the way through, “Get Your Body Beat” drove the crowd absolutely insane, amping up the hysteria another notch. Then, traveling back in time with “Shut Up and Swallow,” longtime fans erupts before the band drove the final drag, claiming their throne with the amazing finale of “Sent to Destroy.” Offering a set packed full of classics as well as newer cuts, Combichrist delivered a set that was second to none. 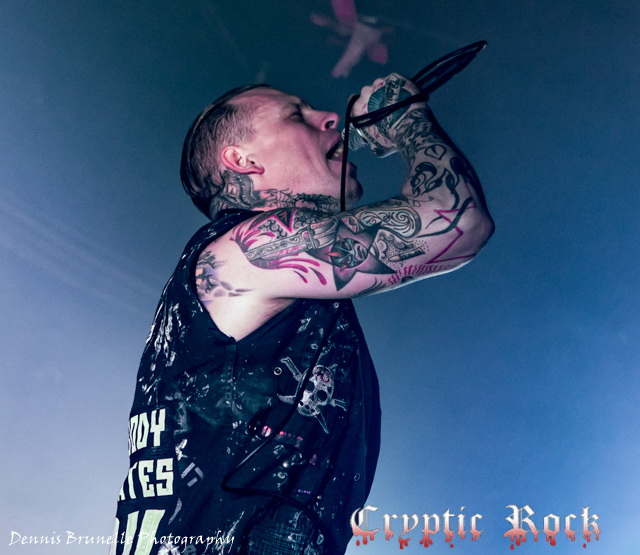 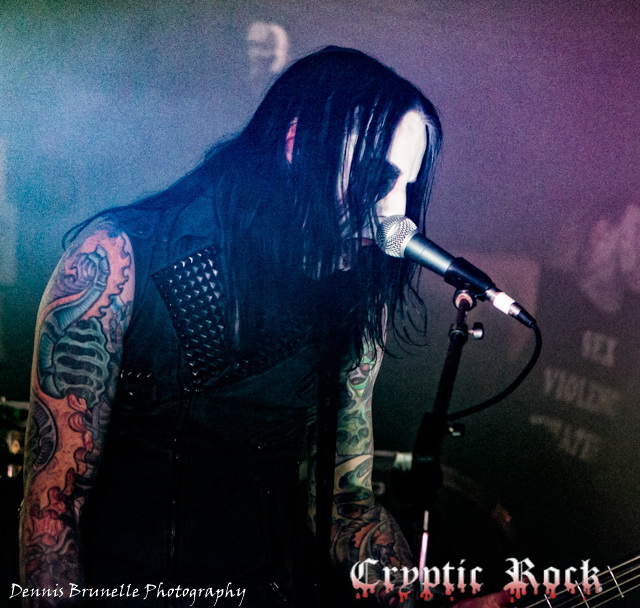 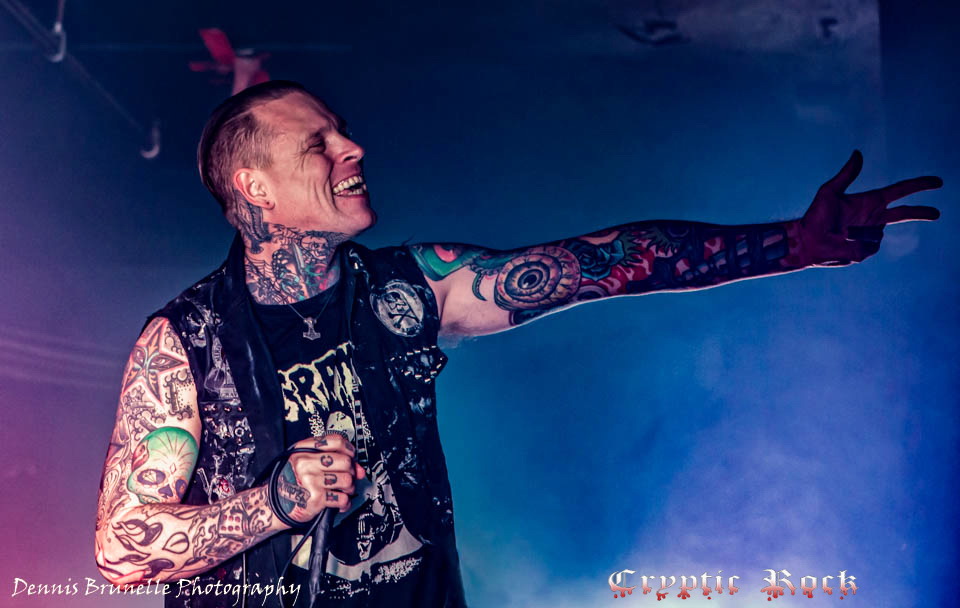 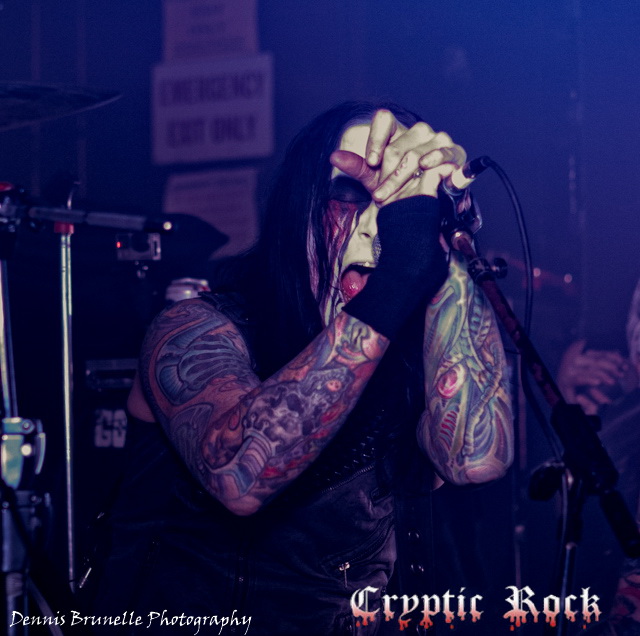 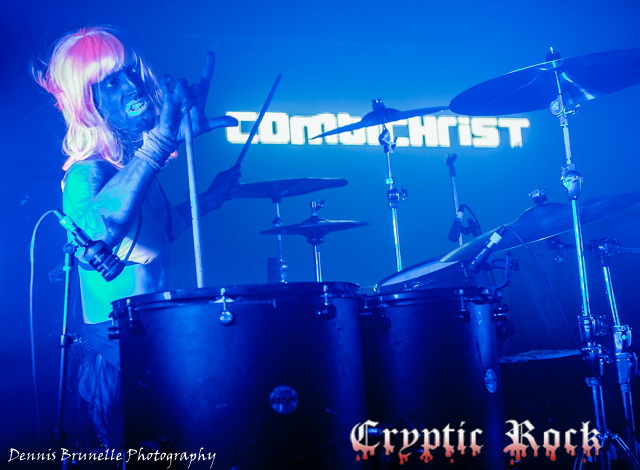 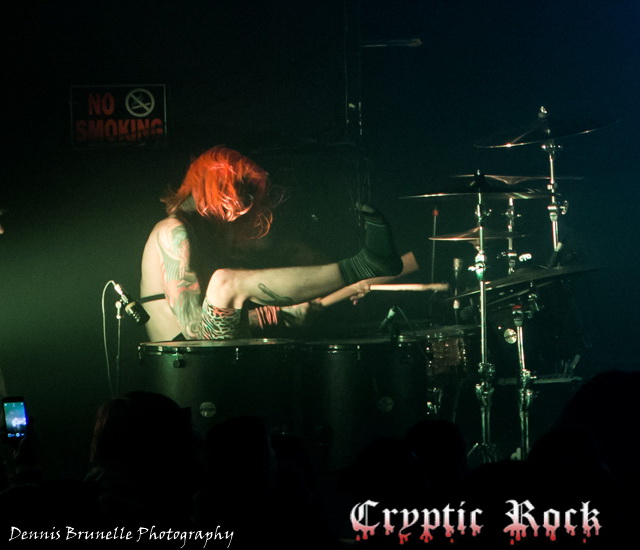 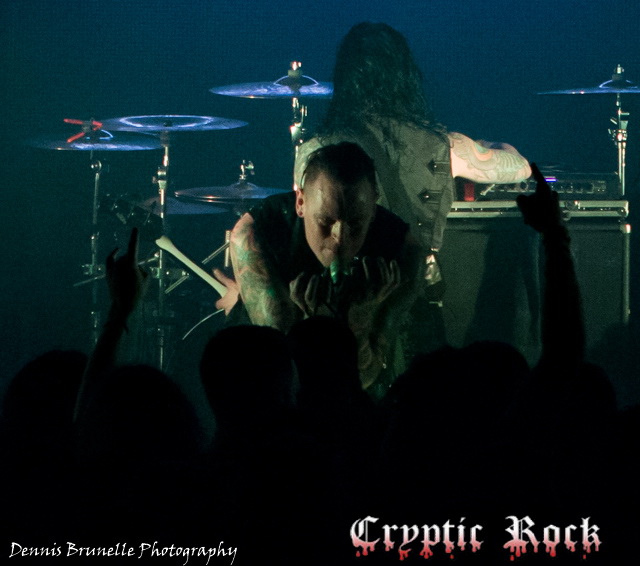 The time had finally come for the one and only Dope. Out of the windy city of Chicago, Illinois, Dope made a big impact back in 1999 with their Epic debut album, Felons and Revolutionaries. Since then sustaining a few bumps and bruises, Dope has kept their legacy strong with one chart-topping record after another. Proving hard work and dedication outweighs the money a label can throw at promoting a band, Dope stand strong while others folded. Taking a much deserved hiatus from heavy touring to recollect, after founder Edsel Dope reassembled the classic Dope lineup featuring Acey Slade, Virus, and Racci Shay for a reunion tour in 2016, the excitement began to stir among fans. Following up with the band’s first new album in seven long years, 2016’s Blood Money Part 1 marked the full-fledged return of Dope.

Continuing to tour in support of Blood Money Part 1, Dope are headlining their first tour since November 2016’s reunion performances. In addition, this also marked their first-ever tour with Combichrist. Known for their raucous stage shows, Edsel Dope, Virus on lead guitar/backing vocals, Nick Dibs on bass, and Daniel Fox on drums were ready to tear up The Palladium.

To say Dope know how to entertain a crowd would be an understatement. Wasting little time, they cranked up excitement starting out with  “X-Hale,” using tons of colorful strobe lights and fog to set the mood. With the energy throughout the hall at a boiling point, a pit formed before the band could even voice their encouragement. From there, Dope continued the excitement through “Violence” and “Blood Money,” while “6-6-Sick” brought an amazing crowd reaction as well as one of the biggest pits of the night.

As Edsel Dope worked the stage, the crowd seemed to follow his energy. As they fed off one another in perfect synchronization, the band worked through to “Bitch” and the audience never missed a beat, chanting “I want you I hate you!” Charging on, they went into “Take Your Best Shot,” then slowed the pace down a bit with “Lexipro” and “My Funeral.” Bringing the pace back up and doing nothing whatsoever to discourage the crazy pit, Dope proceeded into some of their most popular covers, including Dead or Alive’s “You Spin Me Round (Like a Record)” and Billy Idol’s “Rebel Yell.”

Mixing it up for an even setlist, 2009’s No Regrets’ “Die, Boom, Bang, Burn, Fuck” was met with amazing crowd interest. After a night full of Metal, pits, black, and Suicide, Dope’s big finish would be “1999,” from their most recent album, Blood Money Part 1. As the band filed off the stage and the house lights came back to life, it was abundantly clear that the fans were thrilled to have experienced such a phenomenal show from a truly amazing modern Metal band.

While the Blood Lust And Death Tour’s lineup of Dope, Combichrist, September Mourning, and Davey Suicide might not be a typical tour package, the groups formulated a perfect chemistry that gave birth to an immense energy throughout the crowd. They fed off one another’s performances, raising the hype for each successive performer. Each individual band is truly talented and unique, possessing their own distinct brand of performance art that truly complements the others’ styles. The Blood Lust and Death Tour is a menagerie of styles that is not to be missed, so make sure to catch it before it vanishes into the night. 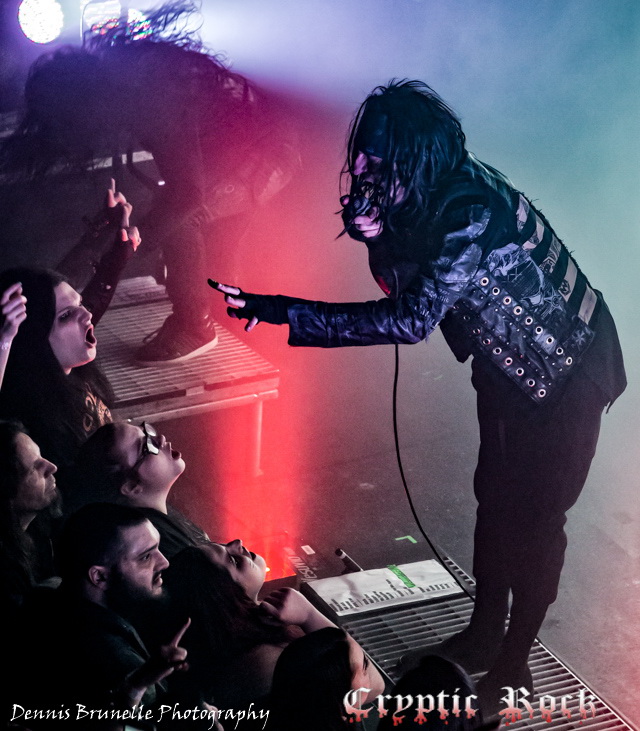 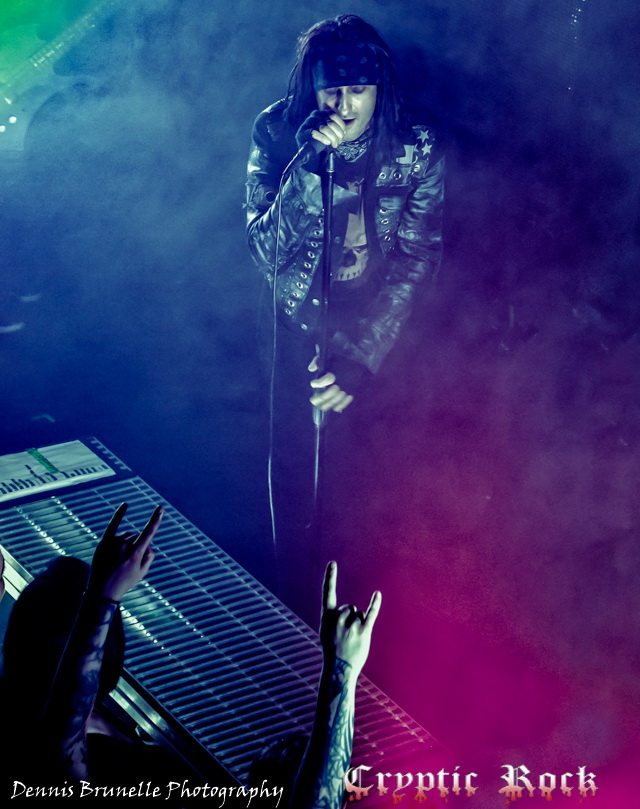 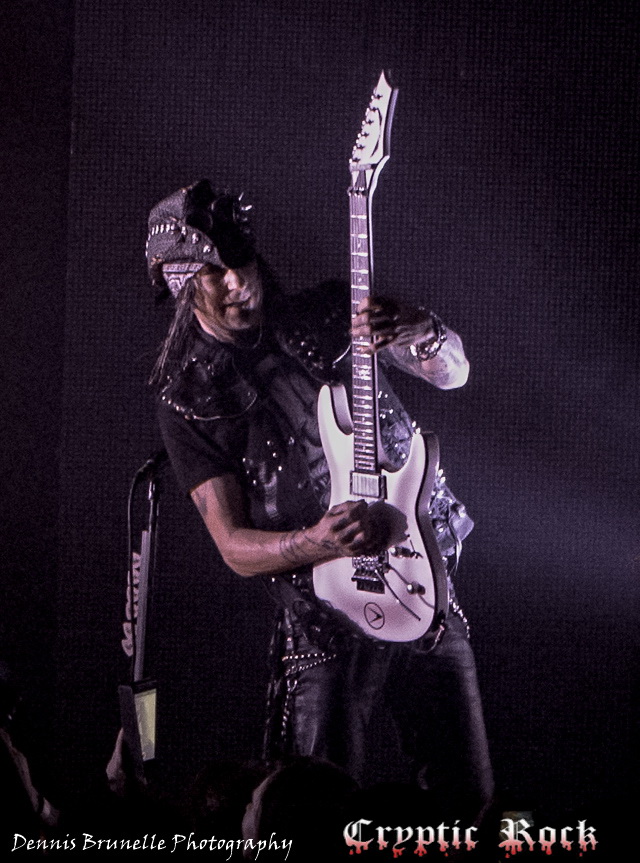 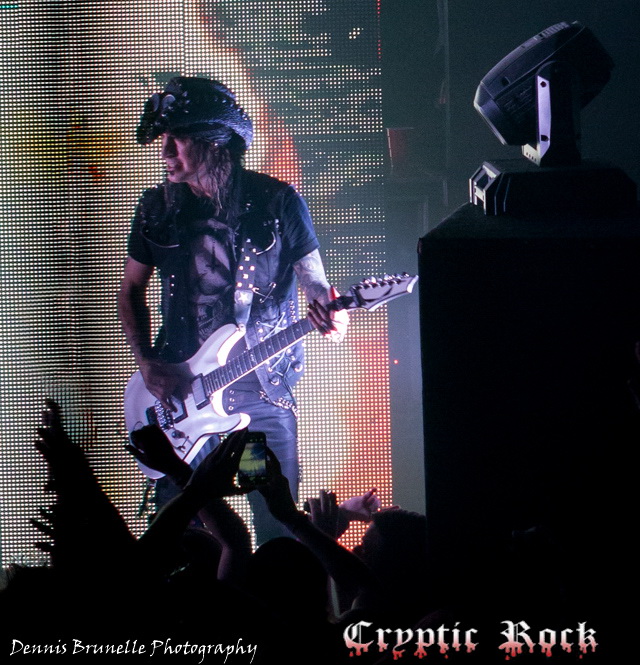 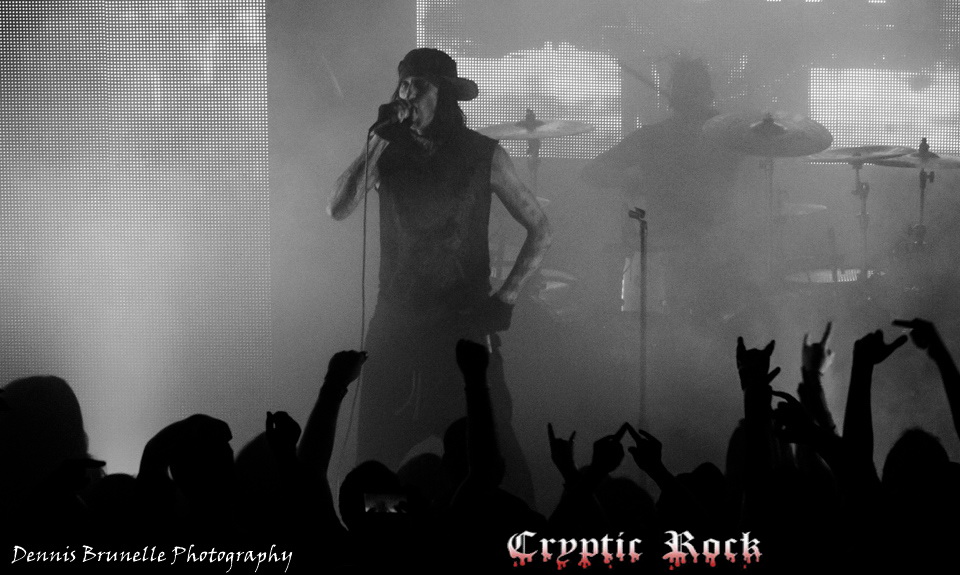 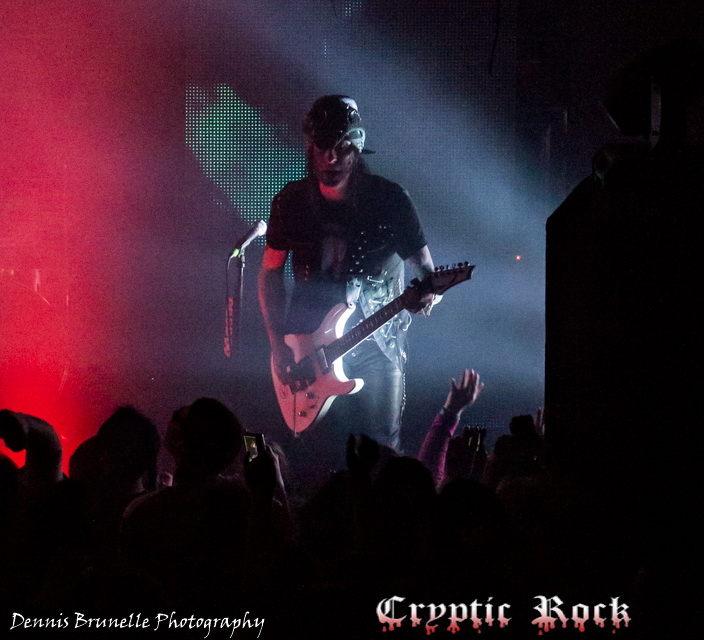 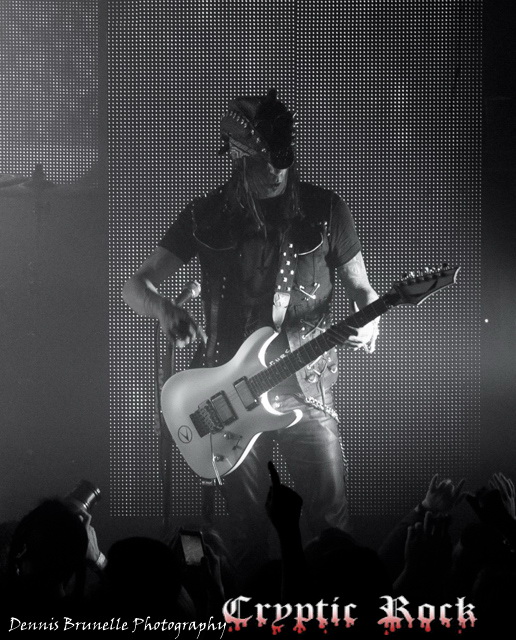 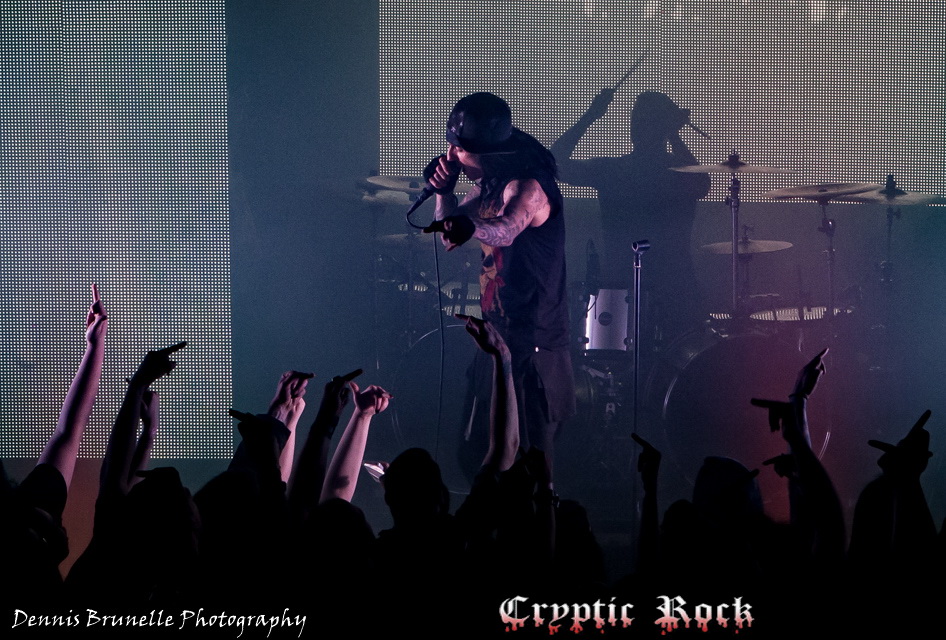 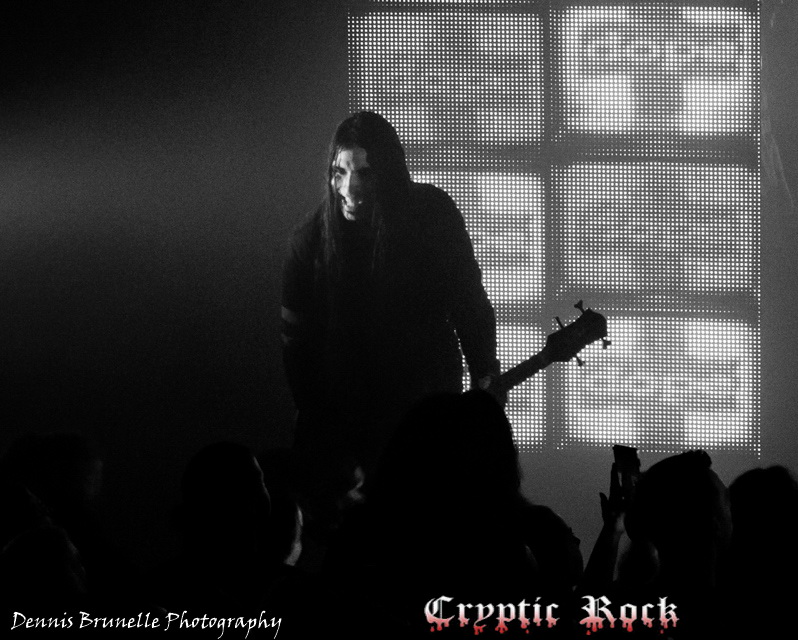