This week in horror movie history celebrates American horror film The Curse, based on H.P. Lovecraft Story The Color Out of Space. Released September 13th, 1987, twenty seven years ago this week, The Curse is a cult favorite, popular in horror movie fan circles. The movie opened in just over 300 theatres nationwide, with a gross of only $1.2 million, not making a very big bump on the Richter scale. This is surprising, what with the Hollywood heavies involved in its making. First time director David Keith, better known by his acting chops as Andy McGee in Stephen King’s Firestarter (1984), put together a grotesque, relatable movie that stuck relatively close to the original Lovecraft yarn. Between that and the other big names involved in the project, one would think this movie would have at least been a sleeper hit.

The film boasts everybody’s favorite Starfleet brat, Wil Wheaton, known for his role as Gordie LaChance in Stand By Me (1986).  Also starring Claude Akins, a seasoned actor best known as the nasty Sheriff Lobo from the series BJ and the Bear, and none other than John “Bo Duke” Schneider. Another noteworthy name involved in the film for horror buffs was Italy legend Lucio Fulci who served as a second unit director. The script as written by David Chaskin (A Nightmare on Elm Street 2: Freddy’s Revenge 1985) and produced by Ovidio G. Assonitis (Beyond the Door 1974, Piranha 2: The Spawning 1982). So, with all of these big names, why did The Curse not make more of a splash?  Maybe it had something to do with the plod along pacing, poor release time, very basic camera work, or even because some sub-par acting, but The Curse never made it past the $1.9 million mark the entire time it lasted on the big screen. One would think with names like Lovecraft, Fulci, and Wheaton attached people would have gone to see it just to satisfy their curiosity. 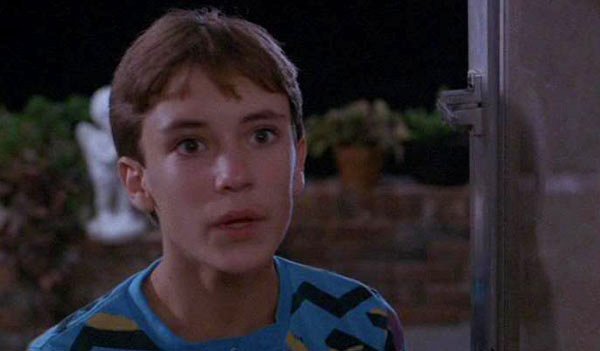 Wil Wheaton in The Curse

The movie starts out with some wart-faced guy being dragged out of his house and screaming about how “it’s in the water!”  Cut to Zack Crane (Wil Wheaton) being pushed into a wheelbarrow of shit by his pumpkin-headed stepbrother, Cyrus (Malcom Danare). Rather than restore order, Zack’s stepfather, Nathan (Claude Akins) cracks poor Zack in the head for taking the Lord’s name in vain.  Even poor Mama Crane gets snubbed by Nathan for breaking some Commandment or another, so she seeks solace in the arms of the farm hand, Mutey McFur Sweater. These Cranes put the ‘fun’ in ‘dysfunctional’. Just as things finally start looking up for Mama Crane, a huge, glowing meteor crashes into the field behind the farmhouse.  When the family comes outside to see what all of the ruckus is about, Nathan sees his wife leaving Casa de Fur Sweater.  Zach runs next door to the house of Dr. Forbes (Cooper Huckabee) and his wife, Esther (Hope North). Doc whips out his convenient Geiger counter and tests the meteor. Even though the Geiger counter is burbling away, the Doc pronounces the meteor safe.

In the middle of all this, a Real Estate Agent named Charlie Davidson (Steve Carlisle) is trying to buy the Crane homestead so he can sell it for a profit to the Tennessee Valley Authority Carl Willis, played by John Schneider. Apparently, the Crane farm and the area surrounding it would make an excellent reservoir, and Real Estate Charlie wants in on the action. He convinces his partner in crime, Doc Forbes, to tell the Cranes that the meteor, now melted into the soil, is nothing to worry about. The Doc stops by the farm and lets the family now that what they have in their back forty is a frozen feces ball that fell out of a passing jet airliner. 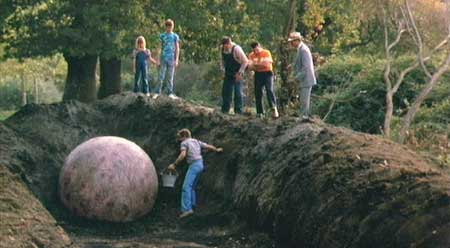 Still from The Curse

Back at the homestead, Mom Crane has a strange wart now growing on her cheek and is chopping veggies for dinner. Imagine her horror when she cuts open a cabbage and the entire thing is rotting from the inside out. The viewers know it is a bad thing because of the Synthesized Music of Terror! The cabbage leaks white goo all over her cutting board, which she barely wipes away and then proceeds to chop tomatoes on it. The tomato promptly squirts her in the face with its demonic juices.

Lots of stuff happens that can be summed up like this: Zack will not do what his stepfather tells him and gets smacked in the head several times; Zack and his sister, little Alice (Wil Wheaton’s real life sister, Amy) think there is something wrong with the garden veggies and well water and refuse to partake; Cyrus wears the same orange football jersey; little Alice gets attacked by homicidal chickens; Nathan uses an old fashioned adding machine; and Mama Crane has now started turning into Pod Person Mama Crane, complete with rolling eyes, brown drool and toady face warts. Her strangeness comes to a head one night when she sews a sock to her palm. Blaming the entire meteor/crop blight on her extra-marital sins, Nathan decides this is the final straw, and he throws her in her room and locks the door. Zack gets Doc Forbes, who is not welcome by Nathan, but is finally curious. He gets a well water sample and sends it in for tests. 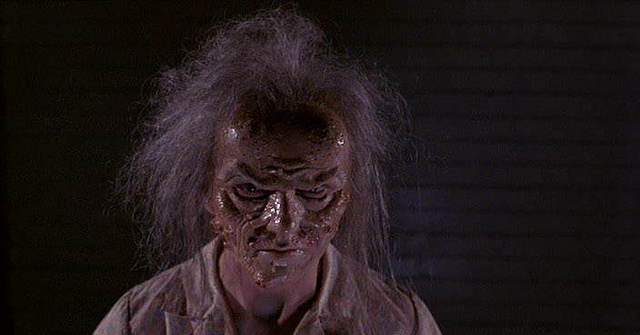 Still from The Curse

It all comes to a head when Nathan and Cyrus finally succumb to their face warty demons and try to kill Zack and his sister. Doc Forbes gets killed by Nathan in the melee, but from nowhere, TVA Carl Willis shows up and sinks a pitchfork into Nathan’s guts. After a final showdown with Cyrus, Zack, his sister and Carl Willis escape the house. Making one last attempt for his mom, Zack finds her in the fruit cellar, looking like the Toxic Avenger after about his fifth dip in the radioactive sludge. She is chest deep in a puddle of her own swamped out flesh. Zack finally gives up and leaves, just as the house implodes.  While it may seem that the glowy ball from space is the Big Bad here, there is an undercurrent about the plight of the American farmer. The money hungry rich are destroying the salt-of-the-earth American families with dreams of fatter bank accounts.

The DVD for this film was released by MGM in 2007, as a double release with its in-name-only sequel, The Curse II: The Bite. There have been other sequels made, and none of them have anything to do with the first movie, story wise.   Audiences looking for a lost gem should check this one out. 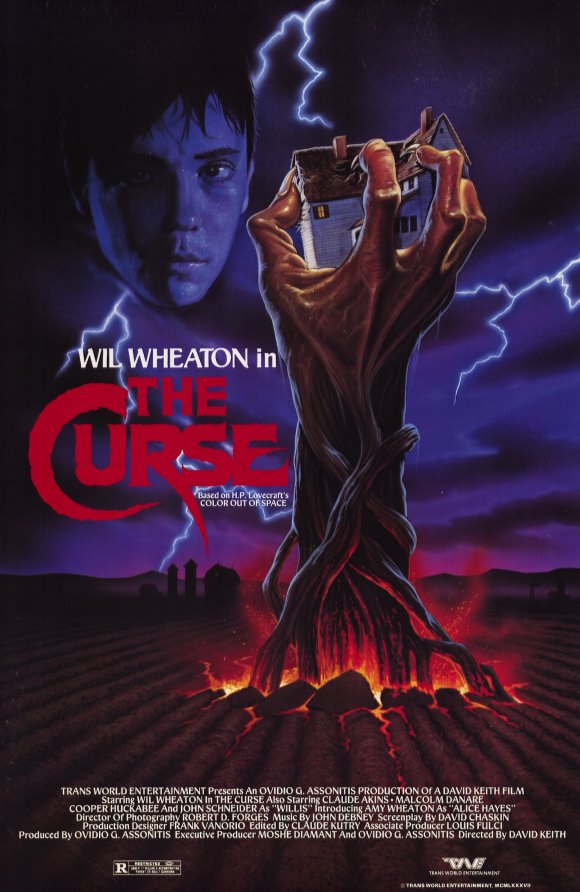 Purchase a copy of The Curse on DVD on Amazon here