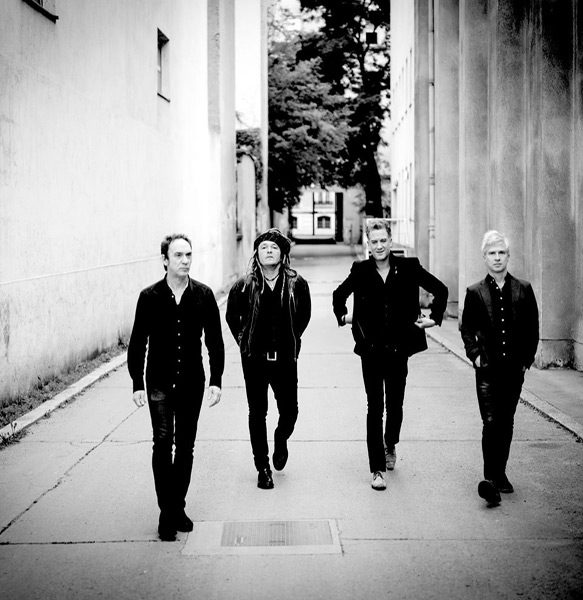 New York’s Nada Surf have nearly twenty-five years under their musical belts: performing, touring, recording, and rocking. Perhaps some remember them from the 1990s when they were “Popular?” Formed in 1992, the band was started by Matthew Caws (guitar, vocals) and Daniel Lorca (bass, backing vocals) in New York City. By 1995, they were playing hometown gigs at the Knitting Factory; meeting with Producer Ric Ocasek (former frontman of The Cars and Weezer producer); and finalizing a recording contract with Elektra Records.

High/Low, the group’s debut album, was released in 1996. That summer, their first single, “Popular,” would become a massive radio hit, leading the band to tour across The States, as well as extensively overseas. Then, The Proximity Effect would arrive in 1998 to mediocre success in Europe and a botched U.S. release.

When the new millennium came around, Nada Surf made a fresh start for themselves releasing The Proximity Effect in the U.S. on their own label. Following the album’s release, the group would tour North America extensively, trying to rebuild their fanbase. A new start also led the band to take regular day jobs: Caws worked at a Brooklyn record store, Lorca worked on computer projects, and Elliot did drum and guitar session work for other artists.

Regrouped and with fresh ears, the band would release Let Go in 2002. Critically-acclaimed throughout Indie Rock circles, they followed up with 2005’s The Weight Is a Gift, 2008’s Lucky, and the cover album, 2010’s If I Had a Hi-Fi. Marking a change, 2012’s The Stars Are Indifferent to Astronomy introduced former Guided By Voices Guitarist Doug Gillard as a fourth band member.

Fast forward to 2016, Nada Surf’s eighth studio album, You Know Who You Are, was just released in a hard-copy format back in March. Featured on NPR and having received media acclaim, the album has seemingly reignited the band’s proverbial fire. Poised on a precipice in their careers, 2016 has been the year to act on artistic urges.

Which leads to their latest and greatest, Peaceful Ghosts, recorded live with the Babelsberg Film Orchestra in both Vienna, Austria and Potsdam, Brandenburg, Germany. Released on October 28th, the album came about after Frontman and main Songwriter Caws received an email asking about a potential collaborative orchestral project from the Austrian national radio station FM4. Just over a year later, the result is a lush recording – culled from two live performances – that covers a wide range of the band’s material.

Band friend and multi-instrumentalist Martin Wenk – whose own band, Calexico, previously participated in an FM4 Vienna Radio Symphony concert – oversaw the musical details of integrating the orchestra into Nada Surf’s music. Alongside Composer Max Knoth, the pair worked to create a score – for both band and orchestra – that would complement the Nada Surf catalogue, as well as offer a fun challenge for the Babelsberg Film Orchestra.

For those who were unable to travel to Europe in June, Peaceful Ghosts is a beautiful representation of what European ears imbibed: a delicious blend of band and orchestra, lyric and composition. The album begins with “Comes A Time,” the sole representation of The Weight Is A Gift. There is an understated beauty to Nada Surf’s music that is immediately complemented by the Babelsberg Film Orchestra. On this particular track, there is a definite highlight offered by the inclusion of a flautist, providing each lyric with a new emphasis in this faultless arrangement.

Many of the album’s tracks are adapted from You Know Who You Are, Nada Surf’s most recent release. A beautiful Alt-Rock love song, “Rushing” truly soars with the orchestral accompaniment. “You come rushing at me and I forget my worries . . . and I feel like I can breathe again,” emotes Caws. Love makes us forget and sets us free. In the aptly-titled “Blonde On Blonde,” Caws sings of stereophonic nonsense: “I’ve got no time I want to lose to people with something to prove . . . I’ve got blonde on blonde on my portable stereo, it’s a lullabye from a giant golden radio.” This Alternative Rock lullabye is a minimalist embrace. Other songs from Let Go include the commercial success “Inside of Love” and the celestial “Blizzard Of ’77.”

“Four year-olds, well, they have got the right idea,” admits Caws. “80 Windows,” an intelligent existentialist exploration, is the sole track from 1998’s The Proximity Effect. Similarly, in “When I Was Young,” the adult looks back and reflects on the naivete of youth in this sole offering from brilliantly-titled The Stars Are Indifferent To Astronomy. The only track to include a guitar solo, Caws shreds as the strings play witness. It is a highlight of the production.

There is a natural respect between band and orchestra that produces a superior understanding: neither one outshines the other, save for very rare moments. The Babelsberg Film Orchestra are careful to dance daintily, to pay tribute to the songs by fostering their rejuvenation. In short, only on “Out Of The Dark” does the orchestra truly outshine Nada Surf, particularly the horns. A native Yankee cannot help but love a lyric such as this – “Not everyone can make New York new” – but it does not save a performance that bows to the accompaniment. Also from You Know Who You Are: the classic Rock feel of “Animal” and the hopeful “Believe You’re Mine.”

Part of some listeners will want so badly for “The Fox” to be a preposterous cover of the Ylvis song about strange noises made by woodland creatures but, sadly, it is not. This fox originally debuted on the band’s Lucky disc and, like its predecessors, it receives a tender boost from the orchestral complement. The tension built by a horn section is resplendent, and creates a more vast contrast between chorus and verse. Also from Lucky are the catchy “Beautiful Beat” and the somewhat somnambulant finale, “Are You Lightning?”

Peaceful Ghosts is a collection, not unlike a best-of, that spans Nada Surf’s career from the late 1990s to 2016. However, there are no songs from their debut, High/Low, included herein. Whether that is due to legalities with their former label or just simply a wish to evolve, no one knows. These raw Rock tracks – choreographed alongside orchestral dynamism – weave a truly adult Alternative Rock album. A testament to Nada Surf’s staying power and musical abilities, Peaceful Ghosts boosts an already accomplished band to the next level. For this reason and many others, CrypticRock gives Nada Surf’s Peaceful Ghosts a 4 out of 5 stars. 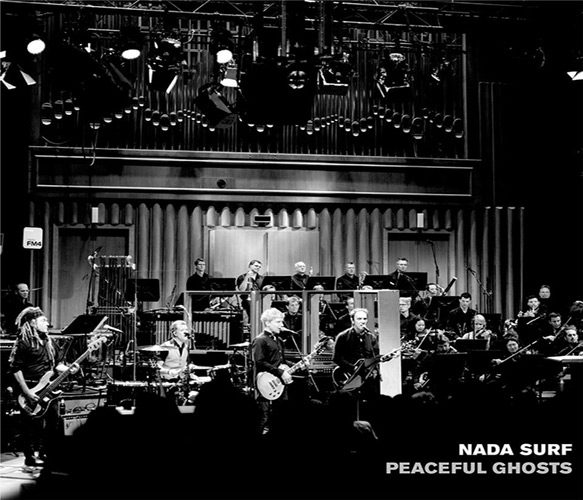